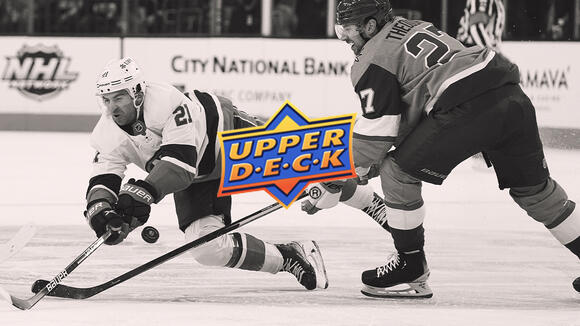 The National Hockey League and its players’ union are extending their trading card relationships with Upper Deck, a long-term renewal that will make the legacy collectibles company the exclusive maker of official NHL trading cards , with NFT rights as well.

The news is particularly noteworthy given the recent upheaval in the trading card world. In the last few months ecommerce giant Fanatics, an NHL partner on the merchandise side, has lured NBA, NBPA, MLB, MLBPA and NFLPA licenses away from other legacy card companies. Fanatics Trading Cards later raised money at a $10.4 billion valuation.

The NHL and NHLPA have been working with Upper Deck since the 1990-91 season. And while the league did talk to other potential partners, it was happy with the Carlsbad, Calif.-based company and their 40-plus-year relationship, said Brian Jennings, the NHL’s chief branding officer.

“We have a fiduciary responsibility to our 32 member clubs to always be active listeners in the marketplace,” Jennings said in an interview. “We always hope that we can renew partnerships. Sometimes it works, sometimes it doesn’t, but we always start at the heart of the matter, which is: How is the relationship? Is it healthy? Is it vibrant? Are they being innovative? Are they being creative? Do they understand the evolving market? And we felt good about it.”

Upper Deck has individual deals with current and retired NHLers like Connor McDavid, Wayne Gretzky and Nick Suzuki . Jennings said the league’s deal extends “beyond five years” but declined to comment on the financial specifics.

Trading cards, like almost all sports memorabilia, are experiencing a boom during the pandemic. That’s come alongside the emergence of digital collectibles, like NFTs , with leagues and teams quickly signing deals with a handful of relatively new platforms. This extension will grant non-exclusive NFT rights to Upper Deck, Jennings said, meaning the NHL could also partner in the future with another company or companies.

The NHL/NHLPA announcement comes less than a week after Upper Deck announced that it was canceling the release of two of its NHL products and delaying a third due to “production and supply chain management” challenges that it didn’t expect to improve until at least the middle of next year.

Upper Deck has “continued to deliver exceptional products over the last 19 months despite the difficulties brought about by the pandemic,” NHLPA executive director Don Fehr said in a statement. “We look forward to continuing to build on our partnership.”

The National Basketball Association and Sportradar have signed a new eight-year deal that will give the Swiss data firm the exclusive rights to distribute NBA data to sportsbooks in the U.S. and abroad. The deal, which starts with the 2023-24 season, includes both a cash component and equity with a current value of more than $1 billion, according to someone familiar with the matter. The NBA will receive 3% of the company (Nasdaq: SRAD) over the course of the agreement, according to a regulatory filing. Sportradar finished trading Tuesday with a market cap of $6.4 billion. The deal strengthens what is already...
NBA・21 DAYS AGO
Sportico

On the latest Sporticast episode, hosts Scott Soshnick and Eben Novy-Williams speak with Jake Reynolds, president of the New Jersey Devils, about the business of the NHL, and how the franchise fits into its parent company’s larger portfolio. The Devils are owned by Harris Blitzer Sports & Entertainment, also the parent of the NBA’s Philadelphia 76ers, the Prudential Center and a handful of other sports, entertainment and real estate assets. It’s considered by many to be the ownership model of the future, and Reynolds discusses the advantages of being part of the larger company. The trio also talks about how hospitality and...
NHL・14 DAYS AGO
Sportico

On the latest Sporticast episode, hosts Scott Soshnick and Eben Novy-Williams discuss some of the biggest sports business stories of the week, including the English Premier League’s new six-year, $2.6 billion deal with NBCUniversal. The deal covers the league’s rights for both English- and Spanish-language broadcasts in the U.S. It’s the most valuable American TV agreement for a European soccer league, eclipsing the $1.4 billion deal that Spain’s LaLiga inked with ESPN earlier this year. It’s also an important keep for NBC, which recently lost its NHL rights and has used prior EPL seasons as a way to drive subscriptions for...
SOCCER・16 DAYS AGO
letsgohawks.net

The Chicago Blackhawks and general manager Kyle Davidson announced a trade on Thursday. Davidson has shipped goalie Malcolm Subban off to the Buffalo Sabres. The Sabres have been in huge need of goaltending help so Subban will give them a huge boost. In return the Blackhawks will get “future considerations”.
NHL・6 DAYS AGO

Potentially enlarging his ownership holdings big time, LeBron James and the Fenway Sports Group (FSG) announced plans to acquire the Pittsburgh Penguins. The group has agreed to purchase a controlling stake in the National Hockey League team. The sale calls for FSG to spend about $900 million, Sportskeeda reported. The...
NBA・7 DAYS AGO
The Hockey Writers

In today’s NHL rumors rundown, Montreal Canadiens owner Geoff Molson spoke with the media about the changes made to the management of the team. Meanwhile, the majority stake of the Pittsburgh Penguins has been officially sold to Fenway Sports. Jonathan Quick makes an odd comment while trying to defend Brendan Lemieux and the Ottawa Senators have four legitimate buy-out candidates. Finally, are the Carolina Hurricanes interested in trading for a pending UFA defenseman?
NHL・9 DAYS AGO
Yakima Herald Republic

Dec. 7—Some unintended generosity led to Monday night's visiting Pittsburgh Penguins donating two-thirds of one of the Kraken's better forward lines of late. Brandon Tanev and Jared McCann both spent the past two seasons in Pittsburgh and have been reunited on a line with center Morgan Geekie the past four games. During the three games before Monday's, the trio had outscored opponents 2-0, outshot them 24-17 and out-chanced them 18-11 in even-strength situations according to the Natural Stat Trick advanced analytics website.
NHL・1 DAY AGO
Sportsnaut

Now that the 2021-22 season is underway, it’s time for some updated NHL power rankings to get a sense of
NHL・1 DAY AGO

New York Hockey Now wishes everyone a Happy Thanksgiving, and good luck on Black Friday. General Managers may be doing some NHL trade shopping, too. The New York Islanders could desperately use some help as their season is quickly entering a critical stage with so many players hurt and sidelined by COVID.
NHL・13 DAYS AGO
floridahockeynow.com

Florida Hockey Now wishes everyone a Happy Thanksgiving, and good luck on Black Friday. General managers around the NHL may be doing some trade shopping as well. The Florida Panthers, sitting atop the NHL standings, will be a buyer when the trade deadline approaches following the Olympics. Florida GM Bill...
NHL・13 DAYS AGO
Sportico

Is hockey getting the fashion treatment? Just days after the opening of the New York Islanders’ new home UBS Arena in Belmont Park, the New Jersey Devils will debut a third jersey paying homage to their home state’s hockey history. Co-designed by Devils Hall of Fame player Martin Brodeur, the new look debuting on Nov. 23 bears the word “Jersey” in script on the front, as well as 21 stripes in reference to the state’s 21 counties, five of which are on the shoulders and arms referencing the five Devils players with retired jerseys: Brodeur, Ken Daneyko, Scott Stevens, Scott Niedermayer and...
NHL・15 DAYS AGO
Sportsnaut

Last week, news broke that the Arizona Coyotes may be in search of a new home–yet again. While the team
NHL・2 DAYS AGO

Now twenty games into the NHL season, the Vegas Golden Knights have remained resilient despite numerous injuries. Now as the team starts to regain its health, they will look to advance even further in the NHL’s pacific division standings. Jonathan Marchessault and Michael Amadio have been cleared after going through...
NHL・12 DAYS AGO
Pgh Hockey Now

There is increased worry about the NHL players participating in the 2022 Beijing Olympics. The National Hockey Now network updated the NHL trade block for the Thanksgiving benchmark. There is renewed national debate over Sidney Crosby vs. Alex Ovechkin, and the Pittsburgh Penguins are no longer that top-heavy team. Vancouver...
NHL・12 DAYS AGO
Sportico

The major sports leagues led by the NFL, NBA and MLB, have made it through the pandemic seemingly in fine financial health, as rising values and fan support forestalled some of the worst forecasts based on curtailed seasons and audience-free arenas. “2020 and the beginning part of 2021 were the most challenging years for sports in recent history,” said Fitch Ratings sports sector director Henry Flynn on a video call. “But our view is through the cycle. We were expecting, as much as we could when we got into [the pandemic], that sports are a strong asset class and this would be...
NFL・10 DAYS AGO
Herald-Palladium

The NHL has postponed two more games for coronavirus-related reasons, making it five so far this season. Upcoming New York Islanders games Sunday at the Rangers and Tuesday at the Philadelphia Flyers were postponed after additional members of the team went into the NHL’s COVID-19 protocol on Saturday.
NHL・11 DAYS AGO
Sportsnaut

Winnipeg Jets defenseman Neal Pionk is in concussion protocol and will miss at least three games. The Jets host the
NHL・1 DAY AGO
markerzone.com

Fans are already referring to it as "the wallop heard around the Waterloo region." Friday night, during an Ontario Hockey League game between the Kitchener Rangers and Owen Sound Attack, Montreal Canadiens prospect Arber Xhekaj answered the bell against Attack captain Mark Woolley for a very intense fight. It was Xhekaj who would eventually come out on top after both landed several hard punches. Xhekaj's last right landed in just the right spot, and Woolley would go crashing to the ice. Both the combatants are six-foot-three, but Xhekaj gave up close to 25 pounds to his opponent, who weighs in at a bulky 230 lbs. This one definitely pumped up the crowd!
NHL・3 DAYS AGO
The Hockey Writers

This latest edition of the NHL Stat Corner covers the past two days (Friday/Saturday) since the NHL took a one-day break for American Thanksgiving. Scoring highlights this entry with lots more player and team stats and milestones from around the NHL. Ovechkin Goals Fuel the Capitals. Alex Ovechkin is tied...
NHL・10 DAYS AGO