By Pamela McClintock
The Hollywood Reporter
2021-10-25 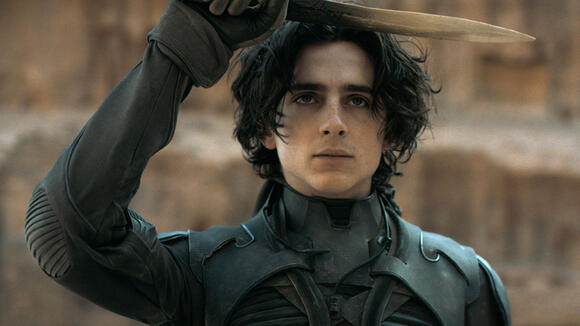 Timothée Chalamet enjoyed a successful doubleheader at the domestic box office over the weekend as two of his high-profile films opened to strong numbers: Dune and The French Dispatch .

Dune in particular is another defining moment for the young actor. The sci-fi epic, from Warner Bros. and Legendary, marks the first time Chalamet has played the lead role in a major Hollywood studio tentpole.

“I think we’ve only begun to scratch at the surface of his unique talents,” Legendary’s vice chairman worldwide production Mary Parent told The Hollywood Reporter on Sunday. “He’s a legitimate movie star, and has that intangible thing that doesn’t come along very often.”

Filmmaker Denis Villeneuve’s Dune opened to a strong $40.1 million at the domestic box office despite facing competition from a dual release in the home. The movie scored the best domestic bow of Villeneuve’s career, as well as the best for a Warners’ hybrid theatrical-HBO Max release. Globally, the movie has earned north of $202 million.

“He’s incredibly instinctual and authentic as an artist, and as human being,” adds Parent. “For being 25 years old, his wisdom is pretty astounding. And he’s been front and center in selling this movie.”

Wes Anderson’s The French Dispatch , whose high-profile ensemble cast includes Chalamet, made headlines at the specialty box office in scoring the top opening theater average of the pandemic era.

Anderson and Villeneuve are two of the numerous auteur directors who have been drawn to Chalamet, whose career arc soared after starring in Luca Guadagnino’s Call Me by Your Name . Chalamet became the third-youngest actor to be nominated for best actor for his performance in the acclaimed 2017 indie film.

His other film credits since his breakout role in Call Me by Your Name include Beautiful Boy (Amazon Studios) and The King (Netflix).

Chalamet has a supporting role in Adam McKay’s upcoming movie Don’t Look Up , starring Leonardo DiCaprio and Jennifer Lawrence. Netflix opens the buzzy film in December during the heart of awards season.

The actor’s next traditional major studio film is Warners’ Wonka , a prequel to the Charlie and the Chocolate Factory tale. Chalamet recently used his Twitter account to reveal a photo of himself on set dressed in character as infamous chocolatier Willy Wonka.

PLEASE NOTE: This forecast, assembled by The Hollywood Reporter‘s awards columnist Scott Feinberg, reflects his best attempt to predict the behavior of the Academy of Motion Picture Arts and Sciences, not his personal preferences. He arrives at these standings by drawing upon consultations with voters and awards strategists, analysis of marketing and awards campaigns, results of awards ceremonies that precede the Oscars and the history of the Oscars ceremony itself. There will be regular updates to reflect new developments. *BEST PICTURE* Frontrunners West Side Story (Disney, Dec. 10, trailer) King Richard (Warner Bros., Nov. 19, trailer) Belfast (Focus, Nov. 12, trailer) The Power of the Dog...
MOVIES・2 DAYS AGO
The Hollywood Reporter

Walt Disney Animation’s musical adventure Encanto kicked off the extended Thanksgiving box office parade with a Wednesday gross of $7.5 million, followed by $5.8 million on Thanksgiving Day for a two-day total of $13.3 million. The family movie, along with MGM and United Artists’ adult-skewing drama House of Gucci, opened nationwide Wednesday ahead of the lucrative Thanksgiving corridor, as did Sony’s action-horror reboot Resident Evil: Welcome to Raccoon City. Thanksgiving Day can be a solid moviegoing day for non-family fare, with traffic picking up in earnest on Black Friday and continuing throughout the holiday weekend. Moviegoing still hasn’t returned to pre-pandemic levels but...
MOVIES・7 DAYS AGO
The Hollywood Reporter

Now that Denis Villeneuve has proven that “Dune” can be faithfully adapted from its classic source material, film fans are beginning to look back at the earlier attempts with new eyes. And the biggest attempt to get re-examined is David Lynch’s 1984 film version, which has been controversial since its release. But Lynch wasn’t the first director attached to “Dune” back in the ‘80s. Ridley Scott was ready to go on it but backed out after scouting locations where he’d have to shoot.
MOVIES・1 DAY AGO

25 brilliant films that bombed at the box office, from Children of Men to Blade Runner

It can be easy to predict which movies will set the box office alight, but every now and then something great comes along that doesn’t fare so well.Over the years, there have been a startling number of films that have struggled, or indeed failed, to recoup their budget, unfairly earning the “box office flop” tag.It’s hard to pin down exactly why films such as these – Children of Men and It’s a Wonderful Life, to name a few – initially struggle to find an audience. But, the majority of the time, quality shines through and the film ultimately finds cult fanbase beyond...
MOVIES・2 DAYS AGO
Variety

“Don’t Look Up” is the last shoe to drop for Netflix this awards season, and there’s a 50/50 chance of it making a seismic impact (pun intended). Director Adam McKay assembles a sprawling ensemble that includes Oscar-winners Leonardo DiCaprio (“The Revenant”), Jennifer Lawrence (“Silver Linings Playbook”), Meryl Streep (“Kramer vs. Kramer,” “Sophie’s Choice” and “The Iron Lady”), Cate Blanchett (“The Aviator” and “Blue Jasmine”) and Mark Rylance (“Bridge of Spies”), along with Oscar-nominees Timothée Chalamet and Jonah Hill, to create a satirical look at our species’ (most likely) inevitable demise. DiCaprio has launched himself into the awards conversation, delivering another knockout performance...
MOVIES・13 DAYS AGO
Concord Monitor

The grand letdown of Wes Anderson’s boorish ‘The French Dispatch’

Wes Anderson is undeniably the king of kitschy quirk, an auteur of the highest order in the realm of highly mannered and fastidious filmmaking. At this point, there’s no disabusing Anderson of his signature style, his films busy little dioramas stuffed to the brim with references and text and beloved character actors, so much so that the eye can barely register it all. However, his latest cinematic curio, The French Dispatch, demonstrates that sometimes too much of a good thing can be a pretentious bore.
MOVIES・13 DAYS AGO
CinemaBlend

Thus far it looks like Dune is everything that Warner Bros. and director Denis Villeneuve were hoping it would be. Both in theaters and on HBO Max it’s been a success, enough so that the almost necessary sequel has officially been given a greetlight. A lot of the credit can go to the phenomenal cast, especially Timothée Chalamet in the lead as Paul Atreides. The director says there was one early scene that showed him he’d cast the right person in that role.
MOVIES・13 DAYS AGO

Film Review: In The French Dispatch, Wes Anderson’s Ennui is Anything But Boring

After going two years without stepping foot in a movie theater, it was The French Dispatch that finally drew me away from my laptop and into the familiar setting. The act of purchasing a ticket and a bucket of popcorn felt revolutionary after so much time had elapsed. The wait...
MOVIES・14 DAYS AGO
Variety

Nicolas Cage is set to play Dracula in Universal’s “Renfield,” a monster movie centering not on the infamous vampire, but rather his notorious lackey. The call sheet may be confusing. That’s because Cage is starring alongside another Nic, Nicholas Hoult, who is portraying the unhinged henchman known as Renfield. An origin story, the upcoming film is expected to take place in the present day. It’s not clear how much it will stick to the source material, Bram Stoker’s 1897 horror novel “Dracula.” In the literary thriller, R.M. Renfield was an inmate at a lunatic asylum. He was thought to be suffering from...
MOVIES・1 DAY AGO
clarkchronicle.com

Another one of director Wes Anderson’s aesthetically pleasing movies recently came out on October 22: ‘The French Dispatch.’ Anderson calls it a “love letter to journalists.” The movie follows three different storylines set in a fictional 20th century city as the French foreign bureau of a newspaper creates its final issue to be published.
MOVIES・12 DAYS AGO
The Post and Courier

There’s a line that Bill Murray’s Harold Ross-like character — Arthur Howitzer Jr., editor of The French Dispatch in the Liberty, Kan., Evening Sun — says a few times in Wes Anderson’s new movie that I can’t stop thinking about. “Just try to make it sound like you wrote it...
CHARLESTON, SC・10 DAYS AGO

"The French Dispatch"; AKA what if the New Yorker had Bill Murray

Wes Anderson’s The French Dispatch is a breath of fresh air filled with a charming sense of life and character. Oh, and, like, also every actor you could possibly think of. The film, basically an anthology of three large stories, is at its heart a love letter to The New Yorker magazine. Anderson transforms the classic and beloved magazine with a fun amalgamation of seemingly disparate stories while also threading his characteristic style and charm throughout. Which is basically just a long-winded way to say that it’s a pretty cool movie that’s not just three separate stories.
MOVIES・13 DAYS AGO
ntdaily.com

‘The French Dispatch’ captures journalism in a bizarrely beautiful way

There are not many times I get to write for a newspaper about a movie about a newspaper, so I am going to do my best to make the most of the situation. “The French Dispatch” is the newest film by director Wes Anderson, and there is so much to love. Anthology films come and go, but of course, we could count on this cast and crew to deliver one for the ages. From Anderson’s articulate style to the star-studded cast, this fun ride into the world of journalism is a must-watch for anyone and everyone.
MOVIES・13 DAYS AGO
IndieWire

After Success of ‘Bruised,’ Halle Berry and Netflix Team to Make More Movies

After Halle Berry’s directorial debut “Bruised” premiered on Netflix as the service’s No. 1 movie in the U.S., the Oscar winner is deepening her ties to the streamer. Netflix announced November 30 that it has signed a multi-picture deal with Berry that will see her star in and produce films, continuing Netflix’s strategy of signing rich deals with major talent to give it a competitive edge in the streaming wars. “There are few people with a career like Halle Berry. She’s an award-winning actress, producer and as audiences saw this past week, she’s an incredible director. We’re thrilled to be in...
MOVIES・1 DAY AGO
darkhorizons.com

Sony Pictures’ “Ghostbusters: Afterlife,” a direct and nostalgia-fueled follow-up to the original two 1980s sci-fi comedy classics, pulled in $44 million in its domestic opening weekend. The good news is that’s a better-than-expected result for the film, especially considering some very mixed reviews from critics – the film scored a...
MOVIES・11 DAYS AGO
cardinalpointsonline.com

In the Reels: ‘The French Dispatch’ tributes journalists

The cinema of Wes Anderson can be a divisive one and an alienating one, but also a deeply emotional experience. Anderson’s emphasis on symmetrical framing is an essential part of his storytelling. His films feel like storybooks or dreams sometimes. It isn’t realistic, it is better than realism. It is...
MOVIES・13 DAYS AGO
Variety

After being delayed a year due to the pandemic, Steven Spielberg’s highly anticipated musical remake of the best picture winner “West Side Story” had its first screenings this week before critics, journalists and varying awards and guild voters. The social media reaction has been loud and palpable throughout the Oscar chamber, which could bring about a late December entry run for the best picture prize, which would be the first since Guillermo del Toro’s “The Shape of Water” (2017) and Clint Eastwood’s “Million Dollar Baby” (2004). There’s incredible history to be made if the buzz is replicated and embraced throughout the...
MOVIES・1 DAY AGO
Showbiz411

The sands of time are running very slowly for “Dune.”. Denis Villeneuve’s sci fi epic would have made well over $150 million by now if it hadn’t been placed on HBO Max for the last month. As it is, “Dune” finished this weekend after 5 weeks in release with just...
MOVIES・11 DAYS AGO