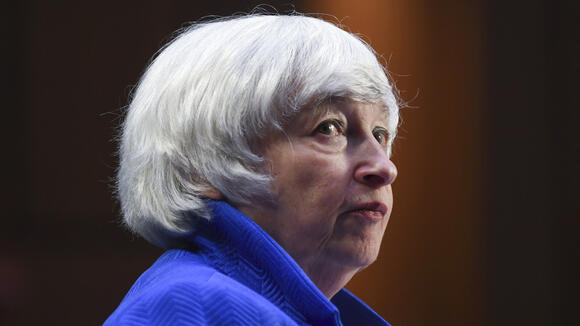 Treasury Secretary Janet Yellen said she doesn’t expect inflation levels to fall before the middle or the end of next year. Her remarks come amid increasing concerns about supply chain bottlenecks and a labor shortage .

See: Why Inflation’s 6% Cost-of-Living Increase to Social Security Could Be a Double-Edged Sword
Find: Biden’s Stimulus Stoking the Flames of Inflation — Are Long-Term Effects Possible?

“The Covid shock to the economy has caused disruptions that we’ll be working through over the next year. And, of course, Americans have not seen inflation like we have experienced recently in a long time,” Yellen said on CNN’s “State of the Union,” according to Politico. “As we get back to normal, expect that to end.”

Asked when she expects inflation — which was 5.4% at the end of September — to get back to the 2% range considered acceptable, Yellen said that it would be the middle-to-second half of 2022, according to CNN.

“Well, I expect that to happen next year. Monthly rates of inflation have already fallen substantially from the very high rates that we saw in the spring and early summer,” she said on “State of the Union.” “On a 12-month basis, the inflation rate will remain high into next year because of what’s already happened. But I expect improvement … by the middle to end of next year, second half of next year.”

Yellen also pushed back on former Clinton Treasury Secretary Larry Summer’s fears that the Biden administration is losing control over inflation, according to CNN.

“I think he’s wrong, I don’t think we’re about to lose control of inflation,” she said, although she agreed that the U.S. is going through a period of inflation that is higher than before, CNN reports. “It’s something that’s obviously a concern and worrying them, but we haven’t lost control.”

See: Kraft Heinz to Consumers on Inflation-Related Price Hikes: ‘Get Used to It’
Find: How To Beat Inflation at Costco and Other Grocery Stores

Earlier this month, the International Monetary Fund slashed its 2021 growth forecast for the U.S. by 0.1% percentage point compared to its July outlook, to 6%, citing rising inflation and supply disruptions, which pose “another policy challenge.”

This article originally appeared on GOBankingRates.com : Yellen Expects Inflation to Last About Another Year Amid Supply Chain Issues and Labor Shortages

Government Shutdown 2021: Will SNAP Benefits for December Be Paid Without Debt Ceiling Extension?

Congress is running out of time to avoid a government shutdown. Lawmakers have until the Dec. 3 deadline to raise the debt ceiling before the U.S. defaults on its debt (although the estimate has...
CONGRESS & COURTS・2 DAYS AGO
GOBankingRates

In a statement released Dec. 1, the Organization for Economic Cooperation and Development (OECD) cut its global economic growth outlook for 2022. The OECD cited the Omicron variant as one factor that...
BUSINESS・23 HOURS AGO
GOBankingRates

The most recent Beige Book -- the Federal Reserve's publication concerning current economic conditions across the 12 U.S. districts delineated by the Fed -- indicates that economic activity grew at a...
BUSINESS・1 DAY AGO
Reuters

Treasury's Yellen: Biden stimulus at most a 'small contributor' to inflation

Congress May Have Ordered Yellen to Trigger a Debt Crisis

Interest rates for loans generally increase as the length of the loan increases. At a car dealership, for example, the finance manager might offer you a loan at 4% for 48 months or 5% for 60 months. The reason for that is simple: There are more risks associated with longer...
U.S. POLITICS・1 DAY AGO
newscenter1.tv

WASHINGTON (AP) — The Federal Reserve is reporting that many parts of the country were hit by supply chain disruptions and labor shortages in November. In a survey of business conditions around the country, the Fed’s 12 regional banks found that the economy continued to grow at a modest-to-moderate pace.
BUSINESS・23 HOURS AGO
Markets Insider

Yellen previously said the end of the pandemic would bring workers back, but data shows millions have gone into business for themselves or retired.
BUSINESS・3 HOURS AGO
KTVZ

Government shutdown would cost the US economy $1.8 billion a week, S&P says

Congress is flirting with a shutdown that would cost the US economy $1.8 billion for each week the government is closed, according to estimates by S&P Global Ratings. “The shutdown, if it’s brief, wouldn’t be a disaster, but would still reduce some of the economic gains the US has felt from the reopening,” Beth Ann Bovino, chief US economist at S&P Global, wrote in a report Wednesday.
CONGRESS & COURTS・6 HOURS AGO

Fed may have to end bond-buying stimulus strategy in early spring, Bostic says

The president of the Atlanta Federal Reserve said the central bank probably should end its bond-buying program by early next spring if the economy keeps growing rapidly and inflation stays high.
BUSINESS・5 HOURS AGO
MarketWatch

To overcome its policy mistake, the Fed has to detail how it got the call wrong on inflation for so long, and then quickly wind down asset purchases
BUSINESS・6 HOURS AGO
NBC4 Columbus

Treasury Secretary Janet Yellen said the US economy is recovering much faster than expected but officials warn progress could be thwarted by the pandemic.
BUSINESS・1 DAY AGO
manisteenews.com

Powell: Fed 'not at all sure' inflation will fade next year

WASHINGTON (AP) — In a fresh sign of his growing concerns about inflation, Chair Jerome Powell said Wednesday that the Federal Reserve can't be sure that price increases will slow in the second half of next year as many economists expect. Powell told the House Financial Services Committee that most...
BUSINESS・1 DAY AGO

The number of Americans applying for unemployment benefits rose last week even though the U.S. job market has been rebounding from last year's coronavirus recession
SAN DIEGO, CA・8 HOURS AGO
MarketWatch

Federal Reserve Chairman Jerome Powell said that, in light of high inflation, the central bank might wind down its bond-purchasing program sooner.
BUSINESS・2 DAYS AGO
schiffgold.com

The transitory inflation narrative is dead. During an appearance before a Senate committee along with Treasury Secretary Janet Yellen Tuesday, Federal Reserve Chairman Jerome Powell said it was time to retire the word transitory. As Peter Schiff explains in his podcast, Powell came close to admitting he was wrong. But the question remains — what is the Fed going to do about this non-transitory inflation?
BUSINESS・1 DAY AGO
Oxford Eagle

Stocks found support from ADP data showing US companies added 534,000 jobs to the economy in November, more than anticipated.
STOCKS・1 DAY AGO