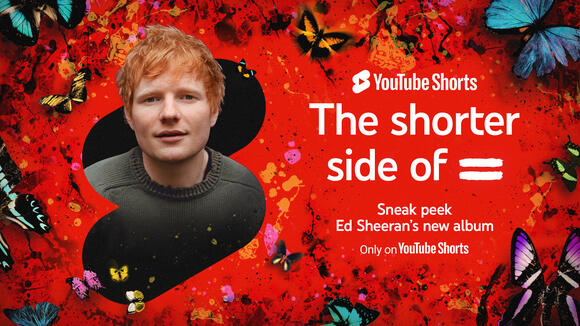 Ed Sheeran has given fans a preview of each song on his forthcoming album, “=” (Equals) via 14 YouTube Shorts ahead of its official release this Friday.

According to the announcement, the 14 Shorts “encapsulate the very personal journey of Sheeran’s album – four-years-in-the-making – with each one bringing to life the intimate and everyday moments that are reflected in the songs. From stepping into an ice bath in ‘Shivers,’ to having a solo dance party in ‘Be Right Now,’ to taking an outdoor shower in ‘Stop The Rain,’ playing a mini ukulele in ‘Sandman,’ and simply hanging out with his family at home in ‘First Times,’ Sheeran is giving fans a short, intimate look into what each song on ‘=’ means to him.”

“I had a really fun day shooting my YouTube Shorts,” said Sheeran. “I’ve always really enjoyed the music video process, so it was fun to explore a new way of doing that by channeling each song’s theme in a unique way, while also giving you a sneak peek of the album!”

Sheeran, who announced early Sunday that he tested positive for Covid-19, is currently quarantining while continuing to promote the album, although it remains unclear whether he will be able to perform on “Saturday Night Live” on Nov. 6 — an appearance that was announced just hours before he revealed his Covid test — although a virtual performance is at least technically a possibility.

“From day one, I knew Ed and his music would have a lasting, global impact and that remains true today,” said Lyor Cohen, global head of music at YouTube. “Ed Sheeran is a storyteller and I am so stoked he is using YouTube Shorts to give his fans an audio and visual preview of his incredibly powerful new album. This is going to be an unforgettable moment.”

Ed Howard, Co-President, Atlantic Records UK added, “We are thrilled to see Ed’s collaboration with YouTube come to fruition and to build on Ed’s long-standing relationship with the platform. The extended Shorts series not only provides us with an innovative way to preview the breadth of the new album sonically, but the short, bespoke films help showcase the narrative of each song in a fun and authentic way. We’re excited to see it ignite his fanbase on a global scale.”

Chairman/COO of Atlantic Records, Julie Greenwald also remarked, “Ed’s a master at everything he does – whether it’s in the studio, on stage, or in the amazing series of videos he’s made over the past decade. He’s a charismatic storyteller, and YouTube Shorts is a great platform for him to give the world a sneak listen to his brilliant new album.”

Dua Lipa’s “Levitating” was the most-played song and Ariana Grande the most-played artist on iHeartRadio’s stations in 2021, according to lists released Monday morning. iHeart, which is the world’s largest radio network, calculated that “Levitating” reached an audience of nearly 1.2 billion in the U.S. alone, while Grande reaced one of more than 2.6 billion. iHeartRadio tallied up the total audience spins (TAS) and streams across iHeartRadio stations nationwide and on the iHeartRadio app, capturing a snapshot of the top 10 most played songs and artists. Of course, the data is not for the entire year, which still has a month and...
MUSIC・4 DAYS AGO
Variety

Interpolations Add Instant Familiarity to New Songs by Artists Like Dua Lipa, Drake and Anitta… but Not Without a Cost

Interpolations — which incorporate elements of familiar songs into new ones — are a phenomenon that’s here to stay in many genres. Like using gonzo remakes of classic tracks in trailers, it’s a way of catching the ear of older listeners, and as long as the mashup still works for younger music fans who don’t immediately know the reference, they can give a song a significant leg up. But the varieties of interpolations are vast. For example, Paul McCartney had nothing to do with Drake using a bit of “Michelle” in “Champagne Problems” — it’s actually a sped-up sample of Masego...
MUSIC・2 DAYS AGO
Variety

Producer William Orbit on Coming Back as a Recording Artist: ‘I Have Always Gone Down the Rabbit Hole’

“billy12” is the name that is typed out at the bottom of William Orbit’s Zoom square as he appears on screen from his home in London, England. It’s an unassuming way for Orbit, who is practically a mythical figure in music, to refer to himself. The longstanding producer and artist has materialized over and over again since the late ‘70s. Along the way, he has collected three Grammys for his work on Madonna’s “Ray of Light,” for best pop vocal album, best dance recording and best song written for visual media. He has produced albums for Blur and Robbie Williams and...
MUSIC・2 DAYS AGO
nowdecatur.com

Anderson .Paak Calls Bruno Mars One Of The Greatest Vocalists He’s Ever Worked With

After months of build-up, and 3 singles, Silk Sonic finally released the album, An Evening With Silk Sonic. During a recent interview, Anderson .Paak had a few things to say about his duo partner, Bruno Mars. He said he tells him all the time that he has a lot of trust in him.
MUSIC・18 DAYS AGO

In today's What's Trending with Mercedez Martinez segment, we discuss Magic Mike's Last Dance, a new Christmas song by Ed Sheeran and Elton John, and a survey on how Americans feel about wrapping gifts for the holidays.
THEATER & DANCE・3 DAYS AGO
Hypebae

Ed Sheeran is collaborating with Jessi and Sunmi on a “Shivers” remix, which the K-pop artists both teased on social media. “Ed Sheeran ‘Shivers’ [featuring] Jessi and SUNMI coming soon on Nov 24 6:00PM (KST),” they each captioned the post. This means the track will drop at 4 a.m. ET on Thanksgiving eve. During the 12-second snippet, all that can be heard is a female voice singing, “Boy, you give me fevers … Oooh,” along to the “Shivers” beat.
MUSIC・14 DAYS AGO
The Press

Ed Sheeran has revealed he's partying past could have landed him in some trouble.
CELEBRITIES・12 DAYS AGO
gamingonphone.com

Pokémon Go: Niantic announces a collaboration with Ed Sheeran on the release of his new album

Pokémon Go players have reason to celebrate as Niantic and The Pokémon Company Group have announced a collaboration with Grammy Award-winning artist and Pokémon aficionado Ed Sheeran. Trainers will be able to experience some of Sheeran’s newer compositions as well as past favourites via an intimate, pre-recorded performance video accessible through Pokemon Go in honour of the release of Sheeran’s new album, “=” (Equals).
VIDEO GAMES・14 DAYS AGO

Ed Sheeran: ‘Yo-Yo Ma emailed me to tell me he loved my song Shape of You’

The star English singer-songwriter talks to Classic FM about his musical roots as a cellist and reveals the courteous email from one of the greatest virtuosos of our time. Singer-songwriter Ed Sheeran has sold more than 150 million records and is renowned the world over for songs like Perfect and Shape of You, topping charts the world over.
MUSIC・14 DAYS AGO
miamistudent.net

There are two different types of fans of musical artists: the die-hard fans (think clue-decoding Swifties) and the people who enjoy a person’s music and add a few of their songs to a playlist, but don’t download their new albums the instant they come out and obsessively listen to them on repeat.
MUSIC・10 DAYS AGO
NME

Ed Sheeran has announced a global live-streamed show, The Equals Live Experience. The singer-songwriter will showcase his new album ‘=’ during a special gig at Alexandra Palace in London, which will be broadcast worldwide via Amazon Music on December 5 at 8pm GMT. Five fans – including one guest each...
MUSIC・10 DAYS AGO
GreenwichTime

Bloc Party will release their sixth album, Alpha Games, next spring. The band unveiled the first single from the album, a hard-hitting alt-rock number called “Traps.”. “From the moment we wrote ‘Traps,’ we knew it had to be the first thing people heard from this album,” singer, songwriter and guitarist Kele Okereke said in a statement. “Playing it in soundchecks on our last tour before it was finished and hearing how it sounded in those big rooms and outdoors.”
MUSIC・9 DAYS AGO

Ed Sheeran, Adele and John Legend have been beaten to the top spot in a vote for the UK’s favourite first dance song at weddings – by Elvis

The King’s Can’t Help Falling in Love ballad from 1961 movie Blue Hawaii was number one in the chart, ahead of modern hits including Sheeran’s multi-platinum selling Thinking Out Loud, Adele’s Make You Feel My Love and Legend’s All of Me. All but one track in the list’s top five...
THEATER & DANCE・7 DAYS AGO
Pittsburgh Post-Gazette

The Commonheart will preview songs from forthcoming album at Mr. Smalls

The Commonheart has been one of the more cautious bands during the pandemic, choosing to use this uncertain time more in the studio than on stage. In early 2020, when the pandemic hit, the Pittsburgh soul-rockers were fresh from touring down South with Los Lobos. They didn’t play their first show back until almost 18 months later, in July at The Black Swamp Arts Festival in Bowling Green, Ohio, followed by their Pittsburgh return at Allegheny Music Festival at Hartwood Acres in September.
PITTSBURGH, PA・10 DAYS AGO
wvli927.com

Ed Sheeran and Elton John are promoting their new single by recreating the famous Love Actually scene featuring Andrew Lincoln and Kiera Knightly. A clip shared by both artists on social media shows Sheeran knocking on John’s door with a set of note cards in hand that read, “Hello. Last Christmas I received a call from my mate Elton John and he told me we should do a 'Christmas Song. And I replied 'Yeah. Maybe in 2022.' But I actually wrote the chorus that day and here we are. Our Christmas song 'Merry Christmas' is out this Friday. Go pre-order or pre-save it now. It has sleigh bells. A lot of them….”
MUSIC・4 DAYS AGO
The Independent

Elton John and Ed Sheeran have officially announced their Christmas song collaboration, titled “Merry Christmas”.The single will be released on 3 December, John revealed in a post to his social media. “Just under a year ago, I called Ed Sheeran to see if he wanted to make a Christmas single with me and now it’s nearly here!” his statement said.“‘Merry Christmas’ will be out Fri 3 December with all proceeds from this year’s Christmas period going to the Ed Sheeran Suffolk Music Foundation and [Elton John Aids Foundation].”John also shared a clip showing Sheeran arriving at his door, in...
MUSIC・4 DAYS AGO
energy941.com

The Ed Sheeran and Elton John Christmas Song Is Coming

Ed Sheeran and Elton John announced their highly-anticipated new Christmas song will be released Friday! It’ll have a fun Love Actually-themed video. The video shows Ed knocking on Elton‘s door with words written on big cards, as in the 2003 holiday film.
MUSIC・3 DAYS AGO
Billboard

Looking for some motivation to help power you through the start of another work week? We feel you, and with some stellar new pop tunes, we’ve got you covered. These 10 tracks from artists like FKA Twigs, Alesso, 100 Gecs and more will get you energized to take on the week. Pop any of these gems into your personal playlists — or scroll to the end of the post for for a custom playlist of all 10.
MUSIC・11 DAYS AGO
MusicRadar.com

Sheeran By Lowden has launched a limited edition signature guitar to mark the release of pop superstar Ed Sheeran's new typographically awkward smash-hit new album, =. The Sheeran By Lowden ‘= Edition’, henceforth referred to as Equals Edition, is the latest in the collaboration between George Lowden and Sheeran, and is limited to 3000 units worldwide, and it comprises a host of signature appointments that's sure to soften the blow that Adele is presently enjoying top spot in the UK albums chart.
MUSIC・3 DAYS AGO