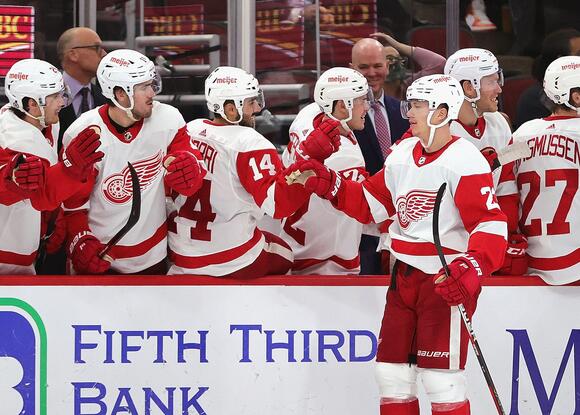 The only thing missing from Lucas Raymond's performance Sunday night was a fight. With three goals and an assist, he joined the company of Gordie Howe all the same. Steve Yzerman, too. Come to think of it, the trio would have made a heck of a line.

Raymond's on a good one as it is. The 19-year-old rookie combined with Dylan Larkin and Tyler Bertuzzi for 10 points in the Red Wings' 6-3 win over the Blackhawks Sunday night and became just the third teenager in franchise history to score four points in a game: Gordie in 1947, Stevie Y in 1983, Raymond in 2021.

"It’s tough to take in," Raymond said. "Those are two of the greatest players to ever play in franchise history. But trying not to think about it that much. Just keep playing, keep working and trying to develop and execute as a team and personally every day."

Raymond's development has Hockeytown giddy. The 2020 fourth overall pick has seven points in his first six NHL games, a big reason why the Red Wings have seven points in the first six games of the season. He's first among rookies in goals and points; a guy by the name of Moritz Seider is first in assists. Raymond doesn't turn 20 until March.

"He’s getting a hell of an opportunity, and he’s earned some of it," said Jeff Blashill, who's played Raymond on Detroit's top line from the start of the season. "He’s in the NHL at a young age, which not lots of guys get a chance to do. And he’s playing with real good players on a real good line and getting important minutes. He’s capitalized on that. It’s great that he had the hat trick, but again, there’s opportunities that he’s getting and he’s gotta keep making sure he's doing a real good job with the minutes that he gets."

Raymond had it all working against Chicago. He scored early in the first when Bertuzzi forced a turnover in the Blackhawks' zone and found him streaking toward the net; Raymond faked a shot and then slid the puck through the legs of Marc-Andre Fleury. He scored late in the second when he drove the net and knocked home a Larkin rebound -- and paid the price by winding up on his stomach. And he scored midway through the third on a power-play one-timer.

It was the second goal, the ugly one, that Blashill may have liked the most.

"Lucas doesn’t shy away from really anything," Blashill said. "He’s taken some hard hits and things like that and he’s not shy at all. He’s got an edge to him, for sure. And he’s certainly not shy about going to the net. But I also think there’s a habitual art that not only do you go to the net, but you gotta stop at the net. And that’s ultimately what he did."

Raymond's on the smaller end of the NHL spectrum at 5'10, but he plays much bigger. He doesn't let his size deter him from getting to the danger areas of the ice. He nearly took a face full of iron when he got knocked down from behind on his second goal and ate a whole bunch of twine instead -- a trade he'll make every time to put the puck in the net.

"If you want to score goals, you have to get into those areas," he said. "You can’t just shoot and score fancy goals. You have to really get in there. That’s usually where most of the goals are scored, so trying to get in there more and more."

These are exciting times for Raymond -- and for Red Wings fans. He's skating on the team's first line and scoring like a couple franchise icons, one of whom happens to be the man who drafted him. He looks every bit like an NHL player, maybe in time an NHL star. Gordie Howe became Mr. Hockey. Steve Yzerman became The Captain. Let's see what becomes of Lucas Raymond.

Detroit Red Wings rookie did it again on Wednesday night by scoring a beautiful breakaway goal to tie up the game against the St. Louis Blues. Watch as Raymond takes a perfect pass from Tyler Bertuzzi and proceeds to bury it in the Blues net. LUCAS RAYMOND TIES THE GAME!...
NHL・2 DAYS AGO
Detroit Sports Nation

The Detroit Red Wings are off to a good start against the Columbus Blue Jackets thanks to a filthy pass from rookie Lucas Raymond to captain Dylan Larkin. Take a look as Raymond finds Larkin, who blasts the puck past the Blue Jackets goaltender.
NHL・11 DAYS AGO
97.1 The Ticket

The 20-year-old ranks first among rookies in assists. He’s second in assists among all NHL defenseman to only five-time All-Star Victor Hedman.
NHL・25 DAYS AGO
Golf Digest

The Detroit Red Wings may have been understandably frustrated when they didn’t land the No. 1 overall NHL Draft pick after their abysmal 2019-20 regular season (prior to the COVID-19 shutdown). Despite owning the League’s worst record by a wide margin, they dropped to No. 4 in the selection process.
NHL・6 DAYS AGO
Yardbarker

It seemed like a pretty comical moment towards the end of the New York Rangers 5-2 win over the Boston Bruins. Artemi Panarin and Bruins super-pest Brad Marchand were jawing at each other. The confrontation ended with Panarin throwing his glove at Marchand. ABC commentator, AJ Mleczko was in between the benches when the altercation took place. “I don’t mean to laugh,” she said. “It is heated and intense.”
NHL・1 DAY AGO
Sportsnaut

Mittelstadt is still listed as week-to-week and he didn’t skate with the team. Granato said, “He skated earlier, we felt that would be a better skate for him. We’re pressed with time on these pregame skates, so we wanted to get him more ice-time.”
NHL・1 DAY AGO

Alex Ovechkin capped his 28th career hat trick by scoring 4:02 into the third period to lead the host Washington
NHL・21 HOURS AGO

If we go by point percentage, which was honestly a must considering the Bruins’ nonsensically light schedule out of the gate this season, the Bruins actually found themselves in a postseason spot on Thanksgiving. It’s the second wild card spot in the Eastern Conference, yeah, but a spot’s a spot...
NHL・11 HOURS AGO
93.7 The Fan

Tristan Jarry and the Pittsburgh Penguins continued their dominance against Canadian teams on the eve of American Thanksgiving as they pick up a victory against the Vancouver Canucks. With the 4-1 victory
NHL・2 DAYS AGO
Sportsnaut

Forward Nathan Bastian is heading back to New Jersey after being claimed off waivers Thursday by the Devils. He was
NHL・2 DAYS AGO
Sportsnaut

New York Rangers forward Artemi Panarin was fined $5,000 by the NHL on Saturday morning for unsportsmanlike conduct. Panarin was
NHL・7 HOURS AGO
Sportsnaut