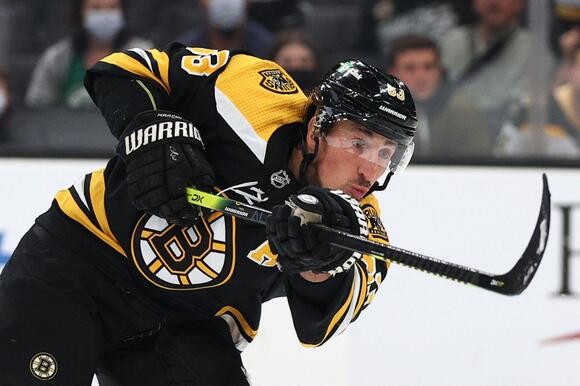 There’s no question that Brad Marchand is off to a hot start this season, on a goal-per-game pace and averaging 1.75 points per game through the Bruins’ first four contests. The Bruins have sprung out to a 3-1-0 record to start their 2021-22 season in part due to the early offensive production from Marchand and the rest of Boston’s top line.

The production of Marchand, David Pastrnak and Patrice Bergeron -- who have combined for 15 points so far this season -- has been crucial to lift the team up while other lines find their way.

Marchand, who has four goals on the season, scored 28 seconds into Sunday’s game against the San Jose Sharks. Similarly to Marchand, David Pastrnak has factored into the Bruins’ scoring every game, including most recently a power-play goal and an assist on Marchand’s goal in the Bruins’ 4-3 victory over the Sharks.

The Bruins’ bottom three lines have faced a tougher challenge finding a rhythm, as a result of new players, new line combinations and early injuries.

To list just some of the changes, the second line needed shuffling after an undisclosed issue knocked Craig Smith out of the lineup on Sunday, with Charlie Coyle moving from center to right wing and Tomas Nosek being upgraded from the fourth line to second-line center.

The Bruins called up Oskar Steen to their third line, which was disrupted by an injury to Nick Foligno that landed him on injured reserve. And the fourth line has already shuffled through five different players -- Nosek, Jack Studnicka, Trent Frederic Anton Blidh, and Karson Kuhlman -- with Blidh also being placed on IR on Sunday.

The Bruins’ top line is the one thing that's been a constant. And it's been dominant.

So far, 43% of the Bruins’ goals (six of 14) have been scored by a member of the top line, and Marchand has also assisted on goals from Charlie Coyle and Derek Forbort. As a line, they average 3.75 points per game and have yet to go a game without scoring at least one goal.

But that’s not too surprising when you consider that last season the line contributed at least one point in 82% of games, failing to get on the scoresheet in only 10 of the 56 matches in the 2020-21 regular season.

But despite the numbers Marchand has been putting up, he has been critical of the way he’s played so far this season.

“I don't think I've played my best hockey,” Marchand said Sunday. “Regardless of the points, I think I can be better, manage pucks better, and I've felt tired in a few games. So, I still think I can be better than what I’ve been. You know, points, it's part of it, but I want to be happy with where I'm playing and how I’m playing and I'm not quite happy enough yet with how things have been.”

The New York Rangers continued their great start to the 2021-22 season on Friday afternoon with an impressive 5-2 win over the Boston Bruins that featured a little bit of everything. First, there was Rangers goalie Igor Shesterkin playing another sensational game by turning aside 34 of the 36 shots...
NHL・1 DAY AGO
NESN

Brad Marchand, Bruins ‘Not Concerned’ After 10-7 Start To Season

Brad Marchand isn’t quite ready to push the panic button at this point in the season. In fact, the Bruins star offered a pretty rational explanation for Boston’s start to the 2021-22 campaign when speaking to reporters after Friday’s loss to the New York Rangers, which dropped the Bruins to 10-7 on the season.
NHL・1 DAY AGO
Yardbarker

It seemed like a pretty comical moment towards the end of the New York Rangers 5-2 win over the Boston Bruins. Artemi Panarin and Bruins super-pest Brad Marchand were jawing at each other. The confrontation ended with Panarin throwing his glove at Marchand. ABC commentator, AJ Mleczko was in between the benches when the altercation took place. “I don’t mean to laugh,” she said. “It is heated and intense.”
NHL・1 DAY AGO
Times Daily

NEWARK, N.J. (AP) — There are a lot of new faces in the Boston Bruins' lineup this season and they are learning how to play together at times. Support local journalism reporting on your community. * New Subscribers Only. * Digital Subscription Only. After the initial selected subscription period your...
NHL・14 DAYS AGO

Karson Kuhlman was a nice spark plug for the Boston Bruins on Saturday against the New Jersey Devils. Their first goal of the game all started when he got a steal in the offensive zone and made a play to Anton Blidh, and then got ahold of the rebound off Blidh’s shot to help the attack quickly reset. The 26-year-old center recorded an assist with Blidh on Erik Haula’s goal that put Boston up 1-0.
NHL・14 DAYS AGO
WEEI Sports Radio

Report: It may not be ‘Boston or bust’ for Tuukka Rask

Tuukka Rask previously said he only wanted to play for the Boston Bruins, but perhaps that has changed. Sportsnet’s Elliotte Friedman reports it’s not necessarily “Boston or bust” for Rask.
NHL・9 DAYS AGO
WEEI Sports Radio

Making his weekly appearance on Gresh & Keefe, NESN’s Andrew Raycroft laid out an interesting option when it comes to a possible Tuukka Rask return to the Boston Bruins.
NHL・9 DAYS AGO
NBC Sports

In need of a win to keep pace in the crowded Atlantic Division standings, the Boston Bruins answered the bell Saturday afternoon with a nice 5-2 road victory over the New Jersey Devils in Newark. Brad Marchand scored twice -- his 50th career two-goal game -- for the Bruins (7-5)...
NHL・14 DAYS AGO

Brad Marchand is leading by example for the Boston Bruins. Boston got back in the win column on Saturday afternoon. The Bruins captured the win by defeating the New Jersey Devils by a 5-2 score. Marchand registered two goals in the winning effort. The first gave the B’s a 2-0...
NHL・14 DAYS AGO
WEEI Sports Radio

The Boston Bruins did not sign Derek Forbort for offense. Yet the defenseman now has four goals in 14 games after his first career two-goal game in Saturday’s 5-2 win over the Philadelphia Flyers.
NHL・6 DAYS AGO
Union Leader

Brad Marchand scored twice in a span of 2:42 in the second period as the Boston Bruins never trailed and snapped a three-game road losing streak with a 5-2 victory over the New Jersey Devils on Saturday afternoon in Newark, N.J. Marchand recorded his second two-goal game this season by...
NHL・14 DAYS AGO
Yardbarker

In this edition of Boston Bruins Weekly, we will look back a the week for the first line, the power play is beginning to click, Jeremy Swayman remains hot on home ice, and more. Big Week For the ‘Perfection Line’. Secondary scoring has been an issue again early in the...
NHL・10 DAYS AGO

For two games, the Bruins got all the second-line scoring they could have hoped for in back-to-back 5-2 wins over the Montreal Canadiens and Philadelphia Flyers. But through 15 games, and especially after their anemic shutout loss to the Calgary Flames, those two games seem more like an exception to the rule. If the top line of Brad Marchand, Patrice Bergeron and David Pastrnak have a rare bad game, as it did on Sunday against the Flames, then the B’s seem to have little chance of a win.
NHL・5 DAYS AGO
WEEI Sports Radio

The Boston Bruins decided to sign Linus Ullmark for $5 million a year this offseason rather than hang onto Dan Vladar for just $750,000. A month and a half into the season, that decision looks like a costly miscalculation.
NHL・5 DAYS AGO
ClutchPoints

Instead of dropping the gloves, New York Rangers forward Artemi Panarin decided to hurl one at Boston Bruins star Brad Marchand near the end of Friday’s game at TD Garden. The two got misconducts from the officials, but that was not the end of it for Panarin, who’s got to shell out a hefty fine for his actions.
NHL・6 HOURS AGO
NESN

One skillful competitor will be more thankful than the rest when the Boston Bruins visit the Buffalo Sabres. Viewers who watch NESN’s broadcast of Wednesday night’s Bruins-Sabres game can compete to win a signed Brad Marchand Bruins third jersey by playing NESN Games’ “Predict The Game” contest. Visit NESN.com/PredictTheGame to sign up and play.
NHL・3 DAYS AGO
New York Post

The Rangers superstar forward was caught chucking his glove at Bruins pest extraordinaire Brad Marchand in the closing moments of the Rangers’ 5-2 win in Boston on Friday. It’s not clear exactly what set Panarin off, and it doesn’t seem like Marchand is telling. “We were talking about what we...
NHL・1 DAY AGO
WEEI Sports Radio

Bruins’ Brad Marchand reacts to Artemi Panarin throwing glove at him ‘I’ve had a lot of things thrown at me, but not typically by players’

BOSTON — Brad Marchand’s ability to irritate, exasperate and annoy opponents over the course of his career is well-documented. On Friday, Marchand’s frustrating behavior drew a reaction the Bruins’ forward hadn’t experienced before. In the final minute of Boston’s 5-2 loss to the New York Rangers, Marchand and Artemi Panarin were jawing back and forth across between their respective benches. With play still live on the ice, Panarin took off his glove and threw it at Marchand.
NHL・23 HOURS AGO