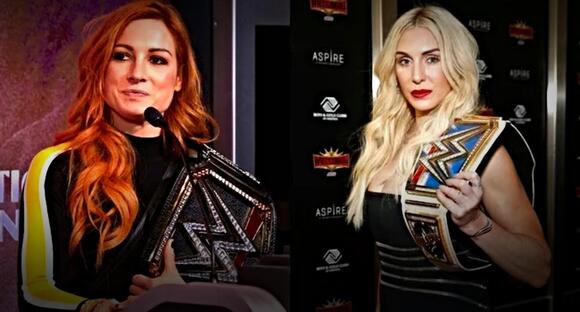 WWE Women's champions Becky Lynch and Charlotte Flair were reportedly involved in a "backstage confrontation" after a segment on Friday Night SmackDown in which they swapped championships amid being selected by opposite shows.

PWInsider.com reports Flair and Lynch exchanged "loud words" over Flair disrespecting Lynch by "trying to make her look bad" during the live segment in which Flair -- the then- RAW Women's champion but recently drafted to SmackDown -- and Lynch -- the then- SmackDown Women's champion but recently drafted to RAW -- were booked to hand over their new show's respective titles to each other.

The report confirmed the situation "was heated but did not get physical" between the two top stars.

Flair reportedly "voiced concerns" about her character potentially looking weak during the segment prior to the show's live broadcast, which WWE attempted to air as originally planned.

During the live broadcast, Lynch attempted to grab the title from Flair, who instead pulled it away and threw it on the ground, which reportedly varied from WWE's script.

On-screen authority figure Sonya Deville demanded Flair retrieve the belt and hand it to her, which Flair did, before Deville asked Lynch to hand over her title, which she instead shoved at Flair.

Initially, PWInsider reported that Lynch shoving the title wasn't planned, however, clarified that it was, but occurred "differently" after Flair dropped the belt intentionally.

Alex McCarthy of talkSPORT reports "no one involved" with the segment "was happy about the title switch and it was debated throughout the day" prior to SmackDown 's live broadcast.

Additionally, McCarthy reports that Lynch and Flair -- who were once very close friends during their run in WWE's NXT developmental system and their inital years on the main roster -- have had a strained relationship "for some time," which sources close to the situation said stemmed from Lynch calling Flair "plastic" during a promo several years ago.

McCarthy also reported WWE Chairman Vince McMahon was unhappy that Flair left the "gorilla position" outside the stage entrance without talking to him following the on-screen incident.

Flair was also reported to be in Orlando Saturday to support her fiancé, Andrade El Idolo , during the live taping of WWE's competitor All Elite Wrestling's flagship program Dynamite.

It's worth noting that El Idolo -- who was granted his release from WWE earlier this year -- tweeted "FU... WWE" on Friday night, which not only coincided with the initial reports about Flair but also the airing of a taped AEW Rampage match between himself and Pac , which was followed by a post-match segment that also included Malakai Black and Cody Rhodes , all of whom were previously employed by WWE.

El Idolo has since deleted the tweet but shared another featuring a photo of himself and Flair which states, "The Queen and My QUEEN. I love you @McCharlotteWWE #AlwaysByYourSide."

Why Tua Tagovailoa is Officially Out of Time in Miami

Why Ben Simmons is Hurting the NBA's Brand

It’s a weird side business. WWE is a huge wrestling promotion with its hands in all kinds of different industries. That can make for some interesting situations, as WWE can wind up doing some things that might leave fans wondering what they’re doing. One such thing is their movie studio, and now they are getting to release something else, albeit not in the same place as usual.
WWE・10 DAYS AGO
wrestlinginc.com

A fan who attended last night’s RAW at Barclays Center in Brooklyn, NY has shared a picture of Becky Lynch checking in on her husband, Seth Rollins, after he was aggressively jumped by a fan. As reported earlier, Rollins was blindsided and tackled by a fan who ran down from...
WWE・14 DAYS AGO
wrestlinginc.com

Welcome to our WrestlingINC.com Live WWE RAW Viewing Party. Tonight’s show comes from the FedEx Forum in Memphis, TN. – Tonight’s WWE RAW opens up on the USA Network with a look back at last week and how Kevin Owens was added to the WWE Title match at WWE Day 1 with Seth Rollins and champion Big E. Rollins is backstage now. He laughs and says tonight Owens will find himself going one-on-one with Big E inside a Steel Cage. We see the cage being lowered around the ring as Rollins goes on, saying he will enjoy every second as they destroy each other. He says at WWE Day 1 we will usher in a new year with a new champion, as he claims his rightful place as WWE Champion. Rollins laughs again and tells everyone to enjoy the show. We cut backstage to a fired up WWE Champion Big E. He says tonight in the cage there is no easy way out and not only will he beat Owens, he will punish him. We’re live from the FedEx Forum in Memphis, Tennessee as Jimmy Smith welcomes us. He’s joined at ringside by Corey Graves and Byron Saxton.
WWE・16 HOURS AGO
411mania.com

Seth Rollins, like Becky Lynch, spoke with Ariel Helwani of BT Sport after his match at WWE Survivor Series on Sunday, and Rollins discussed the build to Lynch’s match with Charlotte Flair and his wife’s emotions heading into it. Here’s what Rollins had to say (via Fightful):. Seth Rollins on...
WWE・14 DAYS AGO

For Charlotte Flair, being a 12-time women’s champion in WWE is not enough. She has even loftier goals for her career. “I don’t think people appreciate me right now,” Flair said during an interview on The Masked Man Show. “Not until something or someone is gone do they realize what they have. And when I’m gone, I will go down as the greatest ever, man or woman.”
WWE・14 DAYS AGO
Sportsnet.ca

Survivor Series 2021 is in the books. The six match card was bookended by a pair of fantastic matches with four of the top stars in WWE but left a lot to be desired in the middle, including with the traditional five-on-five elimination matches. Let’s take a look at back...
WWE・14 DAYS AGO
ewrestlingnews.com

Becky Lynch is the current RAW Women’s Champion, and she spoke about CM Punk Chants hijacking the Women’s 5-on-5 Survivor Series Elimination match. The match took place at Survivor Series at the Barclays Center in Brooklyn, NY. According to Becky, the fans disrespected all the women that were performing for...
WWE・12 DAYS AGO
411mania.com

Becky 500: Becky Lynch Celebrates Being A Champion Every Day She's Been Active Since WrestleMania 35

Becky Lynch is a history maker. She is the first woman to ever win in the headlining match of WrestleMania. To date, she's the only woman to come out victorious in the main event of a single-night WrestleMania. Becky Lynch was the Raw Women's Champion for over a year until...
WWE・3 DAYS AGO
WWE

The time has finally come for Liv Morgan. Can she “Liv” in the big time?. After leading a team of five women to victory over a squad captained by Becky Lynch last week, Morgan looks to ride that momentum all the way to capturing the Raw Women’s Title this Monday night on Raw.
WWE・6 DAYS AGO

Tonight’s WWE RAW will air live from the FedEx Forum in Memphis, Tennessee as the build to WWE Day 1 continues. WWE has announced that RAW will be headlined by a non-title Steel Cage match between WWE Champion Big E and Kevin Owens. RAW Women’s Champion Becky Lynch will also be in action as she defends against Liv Morgan.
WWE・1 DAY AGO
firstsportz.com

Becky Lynch has been one of the most dominant Superstars in the recent times. The Man is one of the top Superstars and has dominated the roster for a long time now. She held the title at Wrestlemania 36, but had to relinquish the title a night after due to her pregnancy.
WWE・4 DAYS AGO
Wrestling World

One of the most famous and currently most successful women of the last period in WWE, responds to the name of Becky Lynch, wife of Seth Rollins and who's defined for some years now, the character of "The Man" of the Stamford-based company. From the episode of Monday Night Raw...
WWE・21 HOURS AGO
wrestlinginc.com

Barely minutes after Becky Lynch retained her RAW Women’s Championship against Liv Morgan on Monday’s RAW, Alexa Bliss seemingly hinted at her imminent return. Bliss tweeted a GIF from the movie Mean Girls along with the caption, “Just wait.”. Last month, Bliss tweed that she needed “time to heal” and...
WWE・9 HOURS AGO
FanSided

Another edition of WWE Monday Night Raw was upon us. Two big matches were set for the evening as Becky Lynch defended her title against Liv Morgan and Big E stands toe-to-toe against Kevin Owens in a steel cage. That, plus a lot more to look out for on the longest running wrestling program in history.
WWE・12 HOURS AGO
wrestlinginc.com

Becky Lynch has been on a dominant run since she returned to WWE at Summerslam 2021. Moments after making her shocking return, Lynch challenged the EST of WWE, Bianca Belair, for the Smackdown Women’s Championship. If her return wasn’t shocking enough, her dominant 26-second win over Belair certainly was. The...
WWE・9 HOURS AGO