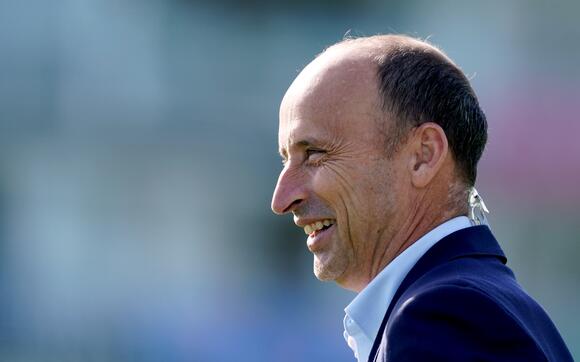 Former England captain Nasser Hussain believes Ben Stokes’ inclusion in the England squad for the forthcoming Ashes proves he is in a better place both physically and mentally.

The all-rounder was initially unavailable when England named the touring group for Australia having spent the past three months on an indefinite hiatus to allow a finger injury to heal as well as prioritise his mental health.

However, after having a second surgery on his left index finger earlier this month, Stokes has filmed himself back in the nets batting and bowling, fuelling speculation of an Ashes return, which was confirmed on Monday morning.

The news delighted Hussain, who told Sky Sports News: “It is obviously great news for England as Ben Stokes is virtually irreplaceable in any format. He’s one of the great all-rounders in world cricket at the moment.

“But more importantly it’s great news for Ben Stokes, both physically and mentally. It is absolutely great news that England have got their talismanic cricketer back in the side.

“I think with the bowling they will need to ease him back in gently but with the batting, as long as that finger is fine, he will be able to go straight back in.

“I think where he might need looking after mentally is when he has to go back into that quarantine situation and back into a bubble.”

World Snooker chiefs have dismissed Shaun Murphy’s claims that Chinese teenager Si Jiahui should not have been given the chance to score a famous UK Championship upset over the 2008 winner on Tuesday night.Murphy, a former world champion who has banked over £4million in career prize money, was bundled out of the event at the first-round stage by 19-year-old Si, who is playing as an amateur after dropping off the tour at the end of last year.Afterwards the 39-year-old launched an extraordinary tirade against World Snooker Tour for allowing players like Si to compete via the ‘top-up’ system, in which...
SPORTS・3 DAYS AGO
The Associated Press

BRISBANE, Australia (AP) — Twenty20 World Cup player of the series David Warner got off a flight that the champion Australian team shared with members of England’s Ashes squad, gave a thumbs up as he entered the arrivals hall and headed into 14 days of hotel quarantine. Cricket in the...
WORLD・12 DAYS AGO
The Independent

Former England captain Nasser Hussain says racism is “prevalent throughout” English cricket and believes British Asian people will have identified with the discrimination suffered by Azeem Rafiq.Former Yorkshire player Rafiq gave testimony before the Digital, Culture, Media and Sport select committee of MPs on Tuesday detailing the racism he suffered at the club, after a botched internal investigation by Yorkshire led to a backlash from fans, pundits and the general public.In the weeks since the findings of the report were first announced, several British Asian cricketers have come forward to tell their stories, while stars including the likes of Michael...
SOCIETY・10 DAYS AGO
LFCTransferRoom

Former England goalkeeper Paul Robinson has been discussing Harvey Elliott's positive progress in the rehab of his ankle injury and believes it won't be too long before the player is back in action for Liverpool. The player who had been a revelation in a good start to the season for...
SOCCER・9 DAYS AGO

Daunting. That’s the word Will Stuart uses when asked for his first impressions of the Red Bull Stress Test the England squad faced in Jersey. The players were fitted with GoPro cameras before heading to the ‘pitch’, so their reactions to the set-up on the beach could be captured – and the nerves definitely kicked in.
SPORTS・9 DAYS AGO
Channel 3000

Bryan Habana: Springboks great says he would have taken the knee as a player if he had the opportunity

While South Africa’s rugby team has decided not to take a knee before games, former Springbok Bryan Habana says he would have done so if he had the opportunity during his playing days. Male and female rugby players at club and international level chose to take a knee in support...
NFL・8 DAYS AGO
SkySports

Sir Ian Botham: Ben Stokes' bowling will be crucial to England's hopes of regaining the Ashes

Botham says he never doubted Stokes' participation after the Durham all-rounder took an indefinite break from cricket in July to rest his finger and prioritise his mental well-being. "First and foremost, I never thought he wouldn't be there," said Botham, who is chairman of Stokes' county, Durham. "And that's not...
SPORTS・6 DAYS AGO
BBC

Ben Stokes’s return to action has been delayed after the opening day of England’s warm-up match against England Lions in Brisbane was cut short due to rain.Stokes has been included in England’s Ashes squad after taking an indefinite break from all cricket in July to prioritise his mental well-being and rest a finger, which he had fractured.England openers Haseeb Hameed (53 not out) and Rory Burns (39 not out) had taken England to 98 without loss before play was halted early in the second session in Wellington Point.A frustrating rain-interrupted day in our first warm-up match between our Ashes and...
SPORTS・4 DAYS AGO
BBC

Rain delays Stokes’ comeback for England ahead of Ashes

BRISBANE, Australia (AP) — After quarantine, the rain. Ben Stokes’ return will have to wait after day one of an internal trial match between England teams was washed out two weeks before the opening test of the Ashes series. The star allrounder arrived at Redlands Cricket Club in Brisbane’s bayside...
WORLD・4 DAYS AGO
The Guardian

Weekend football countdown: Get the latest from David Tindall as the 12-team draw for the European qualifying play-offs takes place
PREMIER LEAGUE・1 DAY AGO

Scotland manager Steve Clarke claimed his players were confident of taking on “anyone, anywhere” after discovering their path to the World Cup will need to veer away from Hampden. Scotland will host Ukraine in the play-off semi-finals on 24 March, having already booked their place among the seeds after winning...
SPORTS・1 DAY AGO
The Independent

England and Wales Cricket board chief executive Tom Harrison has not ruled out an independent regulator for cricket after admitting an “earthquake” had hit the sport in the last few weeks. The ECB published a 12-point, game-wide action plan on Friday to tackle racism and all forms of discrimination in...
SOCIETY・1 DAY AGO
The Independent

England boss Sarina Wiegman saluted striker Ellen White as she marked her 100th cap with a winning goal to close in on Kelly Smith’s record.White’s 40th-minute strike secured a 1-0 Women’s World Cup qualifying victory over Austria at the Stadium of Light and took her to 45 goals, just one behind Smith.Wiegman said: “It’s just an incredible achievement. If you have 100 caps, you’ve been so consistent.Getting closer to the record 👀@ellsbells89's 4️⃣5️⃣th goal for the #Lionesses! pic.twitter.com/vcpuQgE63f— Lionesses (@Lionesses) November 27, 2021“I’ve learned to know Ellen as a real professional player, a terrific team player and then the consistency...
SPORTS・12 HOURS AGO
The Independent

The qualifying event for the 2022 Women’s Cricket World Cup taking place in Zimbabwe has been abandoned due to the emergence of the new variant of coronavirus in South Africa Ireland had been playing in the event in the hope of securing one of the final three places for next year’s showpiece in New Zealand but will now miss out, with Bangladesh Pakistan and the West Indies joining the hosts, Australia, England, South Africa and India by virtue of their place in the ODI rankings.Ireland will be handed one of two remaining places in the next cycle of the...
SPORTS・15 HOURS AGO
The Independent

Ellen White marked her 100th cap with a 45th international goal to hand England a Women’s World Cup qualifying victory over Austria as they extended their perfect start on wintry Wearside.White’s 40th-minute strike, which took her to within one of Kelly Smith’s record tally, clinched a 1-0 win at the Stadium of Light on a day when Sarina Wiegman’s side dominated possession, but struggled to convert it into chances.Nevertheless, they will head into Tuesday’s clash with Latvia – who they beat 10-0 in Riga last month – at the Keepmoat Stadium in Doncaster sitting five points clear at the top...
WORLD・12 HOURS AGO
The Independent

Eddie Howe might have finally been able to take charge of Newcastle from the touchline, but his forlorn stare did little to disguise the misery unfolding in front of him. Arsenal’s momentum was brought to a shuddering halt at Liverpool last week but, despite initially struggling to prise open Newcastle’s rigid defence, they eventually cruised to a comfortable 2-0 victory at the Emirates, as Bukayo Saka and Gabriel Martinelli scored second-half goals – even if an injury to the former will leave Mikel Arteta with cause for concern.It was hardly a disastrous display from Newcastle, who were resilient for a...
PREMIER LEAGUE・12 HOURS AGO
The Guardian

England 1-0 Austria: White gets winner in Women’s World Cup qualifier – as it happened

Defending champion Neil Robertson was stunned by amateur John Astley in the first round of the UK Championship in York Astley, 32, fell off the professional tour last year but fired a break of 119 in the seventh frame en route to a 6-2 win.Astley is the second amateur to beat a UK champion this week after Shaun Murphy was knocked out by China’s Si Jiahui on the opening day.The defending champion bows out.Neil Robertson succumbs to an impressive performance by current amateur John Astley, who reaches round two of the UK Championship for the first time since 2013.#CazooUKChampionship @CazooUK...
SPORTS・2 DAYS AGO