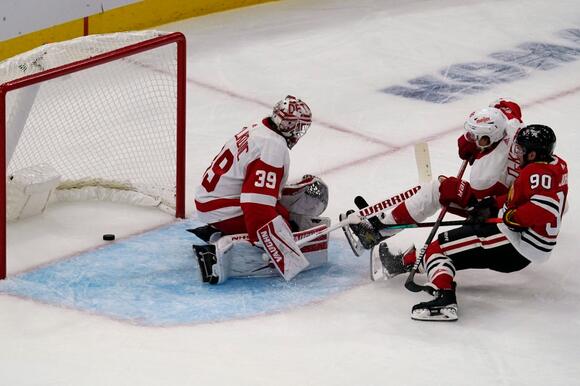 The Detroit Red Wings had to go through the 2021-22 season without Tyler Bertuzzi, which put a damper on the team’s offense, among other things. It did seem like the Red Wings may be without Bertuzzi for quite some time, but he was able to get healthy again in time for this year.
NHL・10 DAYS AGO
The Detroit Free Press

Playing on the eve of Thanksgiving has been a tradition for the Detroit Red Wings since the franchise's first year in the NHL. Then known as the Detroit Cougars, they hosted the Chicago Black Hawks — the spelling was changed to Blackhawks in 1986 — on Nov. 24, 1926, and won, 1-0. Back then, the holiday...
NHL・7 DAYS AGO
detroitsportsnation.com

According to reports, the Detroit Red Wings have made a pair of pre-Thanksgiving roster moves. On Wednesday, Helene St. James passed along that the Red Wings have called up D Dan Renouf and placed D Troy Stecher on Injured Reserve. As noted by St. James, Renouf played one game with...
NHL・7 DAYS AGO
Detroit Sports Nation

Believe it or not, we are already at the quarter-point of the 2021-22 NHL regular season and though our Detroit Red Wings have shown some fight so far, it is still unlikely that they will make the Stanley Cup Playoffs this season. (Don’t kill the messenger) That being said, if...
NHL・8 DAYS AGO

LAS VEGAS — The Vegas Golden Knights chased Thomas Greiss from his net and then they chased the Detroit Red Wings from the building. A good start dissipated into a sloppy loss Thursday at T-Mobile Arena, with the Wings falling for the third straight time on the trip. Their 5-2 loss was the third consecutive time they’ve surrendered five goals.
NHL・12 DAYS AGO
Alpena News

COLUMBUS, Ohio — Zach Werenski scored the go-ahead goal with 1:19 remaining after Yegor Chinakhov tied it with his first NHL goal, and the Columbus Blue Jackets rallied past the Detroit Red Wings 5-3 on Monday night. Boone Jenner added a goal and an assist, and Adam Boqvist and Alexandre...
NHL・15 DAYS AGO
USA Today

LAS VEGAS — Detroit Red Wings captain Dylan Larkin was back on the ice Thursday after a brief COVID scare. Larkin was pulled during Tuesday's game at Dallas after a positive test and placed in pandemic protocol after receiving a positive test. He stayed in Dallas as his teammates flew on to Las Vegas, joining them late Wednesday after further testing revealed Larkin does not have COVID-19.
NHL・13 DAYS AGO

The Detroit Red Wings play their final road game of the week when they visit the Arizona Coyotes tonight at Gila River Arena in Glendale, AZ. Game time is 8:00 PM ET. Detroit have lost their opening three games of the four-game road trip. This is the first of two meetings between the two clubs.
NHL・11 DAYS AGO
Detroit Sports Nation

One thing that has been true over the years is that there are tons of Detroit Red Wings fans all over the country and that was proven to be true once again on Saturday night as the Wings took on the Arizona Coyotes on the road. Take a look and...
NHL・11 DAYS AGO
Sportsnaut

The Detroit Red Wings currently have seven prospects playing junior hockey in North America. Most of these players continue to have strong starts to their seasons. Here is a look at each of the players after the weekend. Cross Hanas. Cross Hanas is playing for a contract and he may...
NHL・14 DAYS AGO
Yardbarker

One of the best things about going through a rebuild is seeing the team’s prospect pool get filled up. Like watching an actual pool get filled up, it gets you excited knowing that as it gets deeper and deeper, fun times lay ahead. For the Detroit Red Wings, their pool is already getting to a point that it’s not too early to break out the floaties and pool toys.
NHL・7 DAYS AGO
Detroit Sports Nation

Dylan Larkin proving his worth to Detroit Red Wings

While it’s been an up and down season for the Detroit Red Wings, one key consistent for the team has been the play of captain Dylan Larkin. Since scoring the first goal of the season on opening night against the Tampa Bay Lightning, he’s been one of the most consistent producers on the roster, and there’s been a major difference in their overall play when he’s been absent from the lineup.
NHL・8 DAYS AGO
FanSided

Some of the Detroit Red Wings top prospects are developing nicely in Europe. Currently, five of the top10 scoring Detroit prospects are playing in a variety of leagues on the other side of the Atlantic. Two goaltending prospects are also making headlines as we enter the American Thanksgiving. Here is...
NHL・7 DAYS AGO
WGN Radio

Just moments ago, the Detroit Red Wings released an injury update on D Troy Stecher and C Mitchell Stephens and it’s not good. According to Red Wings head coach Jeff Blashill, both Stecher (wrist surgery) and Stephens (Lower body) will be out through the Olympic break. Get well soon, boys!
NHL・8 DAYS AGO
Detroit Sports Nation

The Detroit Red Wings walked away with a nice 4-2 win over the St. Louis Blues on Wednesday night and they could not have done without G Alex Nedeljkovic, who was a human highlight reel. Ned’s final amazing save of the night came with under a minute left and as...
NHL・7 DAYS AGO