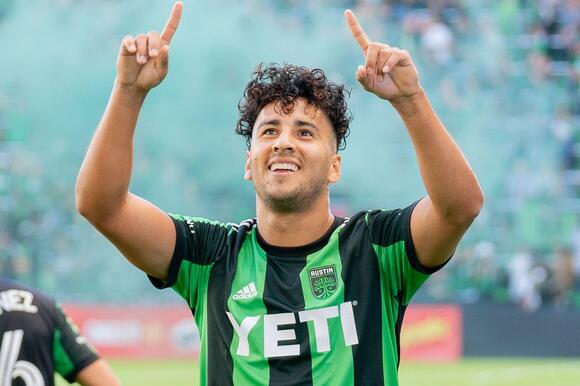 It was an unusual match from a scoring perspective, more own goals—when the opposing team inadvertently scores on their own net—were scored than honest ones.

The Verde and Black came out of the gates strong in the first half, dictating the possession and pace from the outset. Austin FC drew two fouls, was awarded two corner kicks and got off three shots all in the first five minutes of action. Austin was rewarded for its effort with a penalty in the sixth minute.

Austin midfielder Cecilio Domínguez drew the penalty by driving up the left wing before being tackled from behind by Houston defender Zarek Valentin just inside the area. It was then Domínguez who stepped up to take the shot. Taking aim with his right foot, the shot bounced off the left post, then the right before bouncing off goalkeeper Marko Maric of the Dynamo and into the goal. Maric was credited with an own goal and Austin found itself ahead 1-0 early on.

Following the defensive mistake, the Dynamo played with a heightened sense of urgency for the remainder of the half.

And just as the action seemed to be winding down before halftime, Austin launched one last-ditch attack in the final minute of stoppage time. Team captain Alex Ring got the ball in a dangerous position just outside of the box and after dodging several Houston defenders, got the ball to the open Sebastián Driussi. Driussi fired off a right-footed shot into the bottom left corner to take Austin FC up 2-0 going into the break.

Besides a two-goal advantage for Austin, the stats were fairly even in the first half. Both teams committed six fouls and had a player booked for a yellow card. Houston had a slight advantage shooting the ball, getting off eight shots and three on target while Austin had seven shots and two on target.

Austin once again came out quick to start the second half, getting off two shots in the first minute followed by two more in the 53rd minute. All were handled by the Dynamo defense.

As the final whistle neared, the Dynamo ramped up its aggression in an attempt to squeak by with a draw. Just as it seemed that Austin FC would walk away with the clean sheet, defender Julio Cascante sent the ball into his own net after it was cleared by his teammate and ricocheted off of his body.

Now only trailing 2-1, Houston tried desperately to even the score and was awarded two corners in the final minute of stoppage. Alas, the Dynamo could not get off a shot and Austin FC walked away with the win.

With the win, Austin now holds a 2-1 all-time record against the neighboring Houston. Austin remains at the bottom of the Western Conference in 13th place with a record of 8-19-4 while Houston is in 11th place.

Austin FC's next match will be away against FC Dallas on Oct. 30. Dallas FC joins them at the bottom in 12th place.

Enjoying Austonia? Signup for our newsletter to get daily Austin news, straight to your morning inbox!

At the half: Austin holds 2-0 edge over No. 2 Sporting KC in last home match

Austin may have a bittersweet night in their final home match on Wednesday, but they're still soaking in all the Q2 Stadium glory as they lead No. 2 Sporting Kansas City 2-0 at the half.
MLS・25 DAYS AGO
Austonia

Austin FC's come a long way from the 'MLS to Austin' days over four years ago, but they still left much to be desired in the first season that saw more fan attendance than most MLS teams, more losses than victories and a near-bottom placement in the league. The Verde and Black trekked through seven straight away matches to kick off their inaugural season before making a triumphant home debut on June 19 in the brand new 20,500-capacity Q2 Stadium. Battling COVID restrictions, injuries and bouts of scorelessness, the team drew unwavering support from thousands of fans and supporters' groups—some of...
MLS・20 DAYS AGO
Austonia

It's been a long ride through Austin FC's inaugural season, and after seven months of weekly matches—and over three years of anticipation— team's debut season is coming to an end against the Portland Timbers on Saturday afternoon.
21 DAYS AGO
Austonia

Austin FC ended their season on a disappointing note as they fell 3-0 to the Portland Timbers Sunday night to wrap up their first year of play. The Verde and Black left their inaugural season with an unassuming 9-4-21 record, narrowly missing a chance to be crowned the Best in Texas and end in 11th place in the Western Conference over FC Dallas. Instead, the club edged past the Houston Dynamo to earn a 12th place slot in the West, beating out the Dynamo and the East's Cincinnati and Toronto in overall points to close out the season.
MLS・21 DAYS AGO

Houston Dynamo FC midfielder Oscar Boniek Garcia will enter the free-agent market after his contract expires at the end of the league season. Garcia and the club made the announcement on Monday. Garcia, 37, has spent his entire 10-season MLS career with the Dynamo. He has amassed 18,508 minutes played...
13 DAYS AGO
houstondynamofc.com

Houston Dynamo FC midfielder Oscar Boniek García will enter free agency, García and the Club announced today as his contract is set to expire at the conclusion of the league year. García arrived in Houston midway through the 2012 MLS season after winning eight league titles with Club Deportivo Olimpia...
13 DAYS AGO
houstondynamofc.com

Houston Dynamo FC announced their 2021 season club award winners today with forward Fafa Picault earning three honors in his first season with the team. Picault was named the Most Valuable Player, won the Golden Boot as the team’s top scorer and was voted by his teammates as the Player’s Player of the Year. The American-born winger finished his first season with the Dynamo with a career-high 11 goals and tied his highest mark with five assists.
11 DAYS AGO
Austonia

When Diego Fagundez signed onto the new Austin FC program, the 26-year-old midfielder was eager for a fresh start, and it paid off—on Wednesday, Fagundez was given the team's first Offensive Player of the Year award.Already a decade into his MLS career, Fagundez became a surprise standout in Austin, tying for the most goals on the team and becoming a fan favorite after scoring the club's first goal back in April. Fagundez has made headlines before—at 15, he joined the New England Revolution before he could even drive to practice and later became the youngest player to reach 200 appearances...
11 DAYS AGO

Houston Dynamo FC will kick off the 2022 season at home on Sunday, February 27 against Real Salt Lake at 6 p.m. CT with Opening Day presented by PNC Bank, the Club and Major League Soccer announced today. The league also announced that Houston will travel to the Midwest in...
MLS・6 DAYS AGO
Austonia

The now 1-year-old club has released its first 2022 opponent just weeks after its final match of 2021, announcing that it will play FC Cincinnati for its home opener at 5 p.m. on Saturday, Feb. 26.
MLS・6 DAYS AGO
KING 5

Spirit head to NWSL championship with 2-1 win over Reign

TACOMA, Wash. (AP) — The Washington Spirit advanced to the National Women's Soccer League championship game with a 2-1 victory over OL Reign on Sunday. The Spirit will face the winner of Sunday's late game between the Chicago Red Stars and the Portland Thorns next Saturday in Louisville, Kentucky. It...
TACOMA, WA・14 DAYS AGO

Louisville, KY. (11/20/2021) – The Washington Spirit defeated the Chicago Red Stars in the 2021 NWSL Championship Game, 2-1 after extra time. A minimal number of scoring chances thanks to stellar defensive play from both sides in the first 45 minutes looked destined to have the game deadlocked at zero going into the half. Trinity Rodman had the best look at the net for the Spirit in the first half with a shot from close range that went just wide of the right post in the 20th minute. On the other side of the field, the Red Stars’ Katie Johnson sent a quick shot to the bottom left corner of the net that the NWSL goalkeeper of the year Aubrey Bledsoe had to lay out to turn away in the 25th minute.
8 DAYS AGO
goterriers.com

JACKSONVILLE, Fla. – Boosted by 12 3-pointers and a strong rebounding effort, the Boston University men's basketball captured the Jax Bracket championship with a 72-59 wire-to-wire victory over Sam Houston State on Monday afternoon at UNF Arena in The Jacksonville Classic by Fabletics. Claiming a regular season trophy outside Massachusetts...
7 DAYS AGO
ucfknights.com

RGV Vipers win another over the Austin Spurs

EDINBURG, Texas (ValleyCentral) — The RGV Vipers defeated the Austin Spurs in their second meeting this season, 134-99. The Spurs off to a hot start, took the lead in the first quarter 25-23. The tide turned when the Vipers’ Daishen Nix, hit a three pointer to take the lead 28-25. The Vipers were able to […]
3 DAYS AGO
Austonia

From Longhorns to the USMNT: 5 sports NFTs kicking off in Austin's growing crypto-verse

When Texas and the NCAA passed a bill allowing college athletes to profit off their names and likenesses this summer, Longhorn athletes joined professional teams and athletes by stepping into the growing NFT scene.
2 DAYS AGO