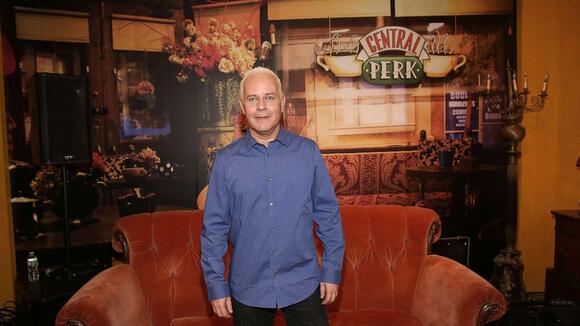 Actor James Michael Tyler, who played Gunther on "Friends," has lost his battle with prostate cancer. He died Saturday at the age of 59, "Friends" producer Kevin Bright announced on Twitter.

The official "Friends" Twitter account also posted a tribute, writing, "Warner Bros. Television mourns the loss of James Michael Tyler, a beloved actor and integral part of our FRIENDS family. Our thoughts are with his family, friends, colleagues and fans."

Earlier this year, Tyler revealed to NBC's "Today" that his fight against the illness left his lower body paralyzed, keeping him from participating in the recent "Friends" reunion on HBO Max in person. He did, however, appear via video call.

MORE: 'Friends: The Reunion' special: Here's what went down

The actor told "Today" the cancer was stage 4, and had spread to his bones. "So eventually, you know, it's gonna probably get me," he said.

He also explained his cancer worsened during the pandemic last year. "I missed going in for a test, which was not a good thing. So the cancer decided to mutate at the time of the pandemic, and so it's progressed," he explained.

In 2019, Tyler told ABC Audio he was "grateful" his character on "Friends" has left such an impression. "I got there, started with one word, and really no storyline whatsoever. You got to say, 'Yeah,'" he recalled.

"I believe the whole, like, 'Gunther's unrequited love for Rachel' was only supposed to be about one or two episodes, but they kept that story arc for 10 years, which I'm very grateful for," he added.

On Sunday night, Jennifer Aniston, who played Rachel Greene in the beloved sitcom, posted a tribute to Tyler on Instagram, sharing a clip from a "Friends" scene of Rachel and Gunther as well as a photo of Tyler.

"Friends would not have been the same without you. Thank you for the laughter you brought to the show and to all of our lives. You will be so missed #JamesMichaelTaylor 💔," Aniston wrote in the caption.

Tyler is survived by his wife, Jennifer Carno.

Fashion icon Virgil Abloh dies, aged 41, following secret cancer battle. Virgil Abloh has tragically passed away after a battle with cancer, his family has confirmed in a statement.
BEAUTY & FASHION・9 DAYS AGO
BBC

Veteran actor Sir Antony Sher has died of cancer aged 72, the Royal Shakespeare Company (RSC) has announced. He was widely regarded as one of the country's finest contemporary classical actors, with a long association with the company. Its artistic director and Sir Antony's husband, Gregory Doran, had taken compassionate...
CELEBRITIES・4 DAYS AGO
News 4 Buffalo

Designer and Off-White founder Virgil Abloh died Sunday after a private battle with cancer, according to a tweet by luxury brand LVMH. He was 41 years old.
CELEBRITIES・9 DAYS AGO
POPSUGAR

Virgil Abloh has died at age 41, according to a statement posted on LVMH's official Twitter account confirming the news on Nov. 28. "LVMH, Louis Vuitton and Off White are devastated to announce the passing of Virgil Abloh, on Sunday, November 28th, of cancer, which he had been battling privately for several years," a statement from LVMH chairman and CEO Bernard Arnault read. "We are all shocked after this terrible news. Virgil was not only a genius designer, a visionary, he was also a man with a beautiful soul and great wisdom. The LVMH family joins me in this moment of great sorrow, and we are all thinking of his loved ones after the passing of their husband, their father, their bother or their friend."
BEAUTY & FASHION・9 DAYS AGO

British TikToker who documented her cancer battle dies at 37

British TikToker Stacey Pentland, who rose to fame on the platform documenting her cancer battle with lymphoma, has died. Pentland, the mother of four, was 37. “It is with great sadness that I have to tell you that our beautiful Stacey passed away at 20 to 2," a post to Pentland’s TikTok account last week reads. "Can I ask you to respect the family’s privacy at this difficult time."
BEHIND VIRAL VIDEOS・14 DAYS AGO
Daily Mail

'I shall not look upon his like again': Tributes paid to acclaimed Shakespearean actor Sir Antony Sher who has died, aged 72, after losing battle with cancer

Theatre star Sir Antony Sher has died of cancer, the Royal Shakespeare Company (RSC) has announced. A statement from the organisation said he had been diagnosed with terminal cancer earlier this year. His husband, Gregory Doran, the RSC's artistic director, announced in September that he was taking a period of...
CELEBRITIES・4 DAYS AGO
TVShowsAce

Audrey and Jeremy Roloff recently welcomed their third child, Radley Knight, to the world. Unfortunately, the little guy already had to have a procedure. The former Little People, Big World stars took to social media to let fans know what’s going on with the baby after his procedure was done.
CELEBRITIES・12 HOURS AGO
country1037fm.com

One of the biggest and most successful sitcoms of the 1970s/80s was “Happy Days.” As was the case in those days, to capitalize on that success, “spinoff” shows were developed from the original. “Happy Days” spawned “Mork and Mindy” (making a star of Robin Williams) and “Laverne and Shirley.” Cindy Williams and Penny Marshall (pictured above) starred in this brilliant comedy of two, single girls in Milwaukee working at a brewery and navigating life. Cindy’s (Shirley) boyfriend on the show was a dancer/singer/boxer, “Carmine ‘The Big Ragu’ Ragusa.” He was played by Eddie Mekka.
CELEBRITIES・5 DAYS AGO

Two of Arnold Schwarzenegger’s five children have followed in his acting footsteps – Patrick Schwarzenegger and Joseph Baena. And five years ago, Baena recreated one of his father’s most memorable scenes from 1991’s Terminator 2: Judgement Day. Now on the set of his new movie, Baena is once again channeling his famous father.
MOVIES・11 DAYS AGO
HollywoodLife

There’s nothing like a football game to put you into the holiday spirit. Rod Stewart joined his sons – Liam and Alastair – but first, they had to get dapper for their boys’ night out. Usually, when you say, “football game” –or “soccer” for Americans — the first thing that...
SOCCER・14 HOURS AGO
24/7 Wall St.

There are a number of best movies lists. The most famous is probably the American Film Institute’s “100 Years–100 Movies”. Movie website Rotten Tomatoes has a 100 Best So does movie data site IMDb, but it is “250 Best” Some critics like the other side of the coin. Awards for worst movies are given out […]
MOVIES・24 DAYS AGO
E! News

Watch: Kim Kardashian Thanks Kanye "Ye" West at 2021 PCAs. The 37-year-old Keeping Up with the Kardashians star left little to the imagination on Tuesday, Dec. 7, at the 2021 People's Choice Awards, turning heads in a silver chainmail mini dress as she cheered on sister Kim Kardashian, who took home the Fashion Icon Award at the star-studded ceremony.
CELEBRITIES・7 HOURS AGO

Holly Madison is opening up about her time living at the Playboy Mansion. The model, now 41, was at the home from the early 2000s until she and Hugh Hefner split in 2008. The star is set to appear in A&E’s docuseries "Secrets of Playboy," beginning on Jan. 24, 2022, and will spill the beans about what made her time there difficult.
CELEBRITIES・9 HOURS AGO
NME

Will Smith has admitted his “heart shattered” when his son Jaden asked to be emancipated when he was a 15-year-old. The King Richard star opened up about the struggles his son faced after their 2013 film After Earth bombed commercially and critically, with Jaden enduring attacks from the media. Writing...
RELATIONSHIPS・29 DAYS AGO
Ok Magazine

Nick Cannon’s baby mama, Alyssa Scott, took to social media to share photos of her son Zen following news of his tragic death. Scott shared multiple photos of the toddler via her Instagram Story on Tuesday, December 7. In the gut wrenching clips, the infant is seen smiling at the proud mama as she talks to him.
CELEBRITIES・15 HOURS AGO
thatgrapejuice.net

In tragic news, Nick Cannon has announced that his five-month-old son, Zen Cannon, has died. In an emotional address on today’s episode of his daytime talk show, the media maestro shared that the youngster died on Sunday (December 5). Cannon and Zen’s mother Alyssa Scott noticed issues with breathing and...
CELEBRITIES・17 HOURS AGO
KRON4 News

The cast of “Harry Potter” will reunite to celebrate the 20th anniversary of the beloved franchise’s first film, and HBO Max has released a "first look" teaser of the special.
MOVIES・1 DAY AGO
People

Kendra Wilkinson is learning to deal with all kinds of clients on her new journey as a real estate agent — and finding that some of them might be interested in her celebrity status more than her listings. In an exclusive clip from Wednesday's new episode of Kendra Sells Hollywood,...
CELEBRITIES・9 HOURS AGO
Get Up Mornings with Erica Campbell

Janet Hubert, our favorite Aunt Viv from the hit show The Fresh Prince Of Bel-Air was hospitalized. Although it is unclear why she was hospitalized. The actress took to Instagram with a post and delete, with a picture of her and Smith that read the caption; “Don’t waste precious time people in anger. Yes people […]
CELEBRITIES・23 HOURS AGO
TVShowsAce

Vanderpump Rules alum Jax Taylor and Brittany Cartwright are at the center of marital issues. On the surface, the two appear to be happy. Back in April, the couple welcomed their first child, son Cruz. However, Jax appeared to be a little hesitant about having any more children. As fans...
RELATIONSHIPS・2 DAYS AGO