Miami Dolphins’ Tua Tagovailoa on Deshaun Watson trade rumors: ‘I do hear it’ 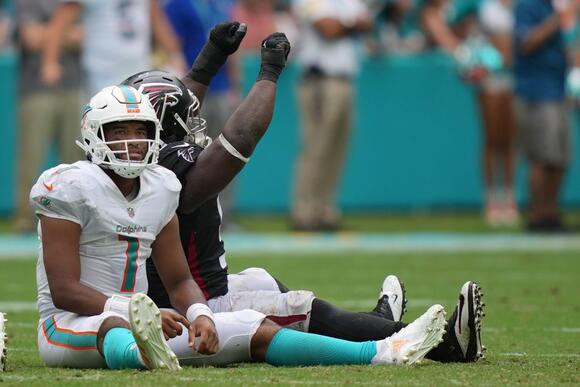 Tua Tagovailoa and the Miami Dolphins are coming off a hard-fought 30-28 home loss to the Atlanta Falcons. This represents Miami’s sixth consecutive defeat after a season-opening win over the New England Patriots.

The backdrop here are trade rumors involving both Tua and Houston Texans quarterback Deshaun Watson . It was just a few days ago that reports broke indicating there’s a good chance that Watson could be headed to South Beach ahead of the Nov. 2 NFL trade deadline.

In talking about these rumors following the Fins’ most-recent loss, Tagovailoa had a rather interesting take.

“I hear it. I do hear it. I just don’t listen to it,” Tua Tagovailoa told reporters .

The second-year quarterback added that he appreciates head coach Brian Flores’ transparency in talks with the quarterback.

Earlier on Sunday , reports indicated that the Texans expect to move Deshaun Watson here within the next week or so. All of this comes with the Pro Bowl quarterback still mired on an off-field situation in which he’s been accused of sexual assault and/or misconduct by north of 20 women. Apparently, Miami’s brass is alright with acquiring Watson before this legal situation is settled.

As for Tua and his Dolphins, they sit at a disappointing 1-6 on the campaign after the team surprised the masses by winning 10 games a season ago. The aforementioned Flores appears to be on the hot seat . Meanwhile, general manager Chris Grier seems to be on the receiving end of unjustified flack.

The No. 5 overall pick of the Dolphins back in 2020, Tua Tagovailoa did throw four touchdowns in Sunday’s loss to the Falcons. However, he also threw two untimely interceptions. The first one happened in the red zone with Miami looking to score. His second pick of the game resulted in a Falcons touchdown just a few plays later.

The Dallas Cowboys clearly have something in running back Tony Pollard. Here are three hypothetical trade destinations for Ezekiel Elliott if they were to plan on moving him. The Dallas Cowboys participated in a thrilling Thanksgiving Day game against the Las Vegas Raiders. Even though they forced overtime, it was the Raiders who left AT&T Stadium with the 36-33 victory.
NFL・1 DAY AGO
The Spun

On Thursday night, the Atlanta Falcons hosted the New England Patriots in a matchup between playoff contenders. Atlanta hasn’t looked like the best team all season, but the Falcons entered tonight’s game in the thick of the wild card race. However, after tonight is over, the Falcons will likely be on the outside looking in.
NFL・8 DAYS AGO
The Spun

The Baltimore Ravens didn’t make any notable trades last week, but it reportedly was not for a lack of effort. According to a report from NFL.com insider Ian Rapoport, the AFC North contenders made several notable inquiries, including one big one with an AFC East franchise. Rapoport reports that the...
NFL・19 DAYS AGO
ClutchPoints

Dolphins QB Tua Tagovailoa’s 3-word update on injury ahead of Week 11 vs. Jets

After missing the Miami Dolphins’ Week 9 home game against the Houston Texans due to his finger and rib injuries, quarterback Tua Tagovailoa made his return to action in the Week 10 clash with the Baltimore Ravens. As Jacoby Brissett suffered a minor knee injury during the first half, Tagovailoa...
NFL・8 DAYS AGO

Tua Tagovailoa is throwing the football seemingly without any limitations. For the first time since fracturing the middle finger on his throwing hand three weeks ago in a loss to the Buffalo Bills, the Miami Dolphins’ second-year quarterback is working exclusively with the first-team offense, and he’s throwing the ball with some velocity.
NFL・7 DAYS AGO
The Spun

There isn’t much of a quarterback controversy for the Miami Dolphins right now. That didn’t stop Brian Flores from declaring Tua Tagovailoa his starting quarterback on Monday afternoon. Flores announced on Monday that Tagovailoa will start against the New York Jets this Sunday. Tagovailoa has dealt with a number of...
NFL・11 DAYS AGO
ESPN

MIAMI -- Dolphins quarterback Tua Tagovailoa is expected to start against the New York Jets, coach Brian Flores said Monday, after missing his past two starts with a fractured finger on his throwing hand. Tagovailoa missed Miami's game against the Houston Texans in Week 9 and sat out the first...
NFL・11 DAYS AGO
ClutchPoints

The Houston Texans have not seen Deshaun Watson play a single snap this season and it seems unlikely at this point in time that he will play. Instead, they were open to dealing their former franchise quarterback. Ahead of the NFL trade deadline, there were plenty of interested teams, but no one ended up pulling the trigger on a deal for him.
NFL・14 DAYS AGO

The Miami Dolphins may not have Tua Tagovailoa on the field tonight as the starter and while many fans want to defend him, injuries are a problem. Tagovailoa spends quite a bit of time banged up and while we can say some of it is freak accidents or unavoidable, the reality is that no matter the reason, he isn’t on the field.
NFL・14 DAYS AGO
FanSided

After another poor performance by Jacoby Brissett, once again, there should be no question that Tua Tagovailoa is the QB for this team for the foreseeable future. In a shocking turn of events, the Miami Dolphins upset the Baltimore Ravens in a matchup that many predicted would go the other way. The Dolphins defense put together the performance of the season, keeping Lamar Jackson and this high-powered Ravens offense from doing anything until the final moments of this game. It was, by far, the most dominant defensive performance from this team over the course of this season.
NFL・14 DAYS AGO
247Sports

Tua Tagovailoa was medically cleared and able to play Thursday against Baltimore, but Miami coach Brian Flores opted to go with Jacoby Brissett and let Tagovailoa’s fractured finger on his left hand get even more time to get fully healthy. In the third quarter, though, Brissett took a big hit and grabbed his knee in pain.
NFL・14 DAYS AGO

On the latest episode of the Miami Sports Pod, Local 10 Sports Anchors Will Manso and Clay Ferraro discuss the fallout of the Canes loss at FSU, and what it means for head coach Manny Diaz. Will and Clay also discuss the return of Dolphins quarterback Tua Tagovailoa, and whether...
MIAMI, FL・11 DAYS AGO
tdalabamamag.com

Miami Dolphin fans believe in Tua Tagovailoa. The supporters in South Florida want him to succeed. After a matchup with the Ravens on Thursday night, fans chanted “Tua! Tua!” as he came off the field. He did not start the game because of a fractured finger on his left hand, but the fifth overall pick from the 2020 NFL Draft emerged off the bench in the third quarter. Tagovailoa replaced an injured Jacoby Brissett (knee) and guided the Dolphins on two scoring drives — including one for a touchdown in the fourth quarter. Miami’s touchdown possession included a 64-yard pass from Tagovailoa to wide receiver Albert Wilson. The Dolphins have won back-to-back games and shocked the Ravens by a score of 22-10 at home.
NFL・14 DAYS AGO
AL.com

When Miami plays the New York Jets on Sunday, coach Brian Flores expects Tua Tagovailoa to take the first snap for the Dolphins despite the quarterback’s finger injury. “He’s going to have some discomfort with the finger,” Flores said on Monday about Tagovailoa’s return to the starting lineup. “He banged it the other day. We were trying to avoid that, but it happened. He’s had some time to rest it and practice today, and that’s my expectation for this weekend.”
NFL・11 DAYS AGO
hotnewhiphop.com

Deshaun Watson is one of the most talented quarterbacks in the entire NFL, although as it stands, he is battling numerous sexual assault lawsuits. There are 22 women accusing him of inappropriate conduct and there is no telling when he will be settling these cases, if at all. To make...
NFL・14 DAYS AGO
Miami Herald

Dolphins quarterback Tua Tagovailoa remains limited with his fractured middle finger on his throwing hand but will start Sunday at the Jets, coach Brian Flores said. “He’s definitely limited; definitely some discomfort,” Flores said. “He hit the finger again [Thursday against Baltimore]. We will monitor that as the week goes. Get the swelling out of there, do the best we can.”
NFL・11 DAYS AGO
Bleacher Report

Tua Tagovailoa to Start vs. Jets After Leading Dolphins to Win vs. Ravens in Return

After leading the Miami Dolphins to victory in Week 10 off the bench, Tua Tagovailoa will return to the starting lineup against the New York Jets on Sunday. "My expectation is he'll start this weekend," head coach Brian Flores told reporters Monday. "Obviously he’ll have some discomfort with the finger. Banged it the other day—we were trying to avoid that, but it happened. But he’s had some time to rest it and he’ll practice today."
NFL・11 DAYS AGO
ClutchPoints

The Miami Dolphins deemed Tua Tagovailoa not ready to start against the Baltimore Ravens on Thursday Night Football because of a finger injury, but they had him as the backup for Jacoby Brissett. When Brissett went down with a knee injury in the third quarter, the Dolphins inserted Tagovailoa and kept him in the game even after Brissett was cleared to return.
NFL・15 DAYS AGO