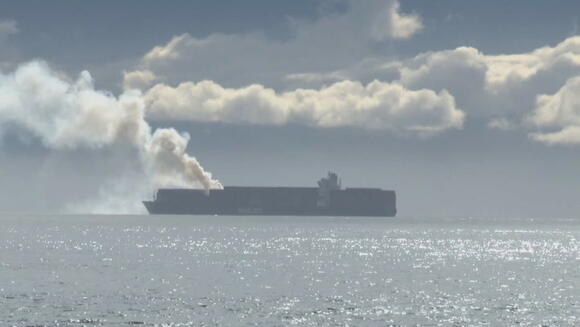 Catastrophe hit a container ship in Canadian waters when a “ bomb cyclone “ caused a fire onboard shortly after dozens of the containers fell off the vessel.

The ship had left from Busan, South Korea, with cargo intended for North America.

As the containers drifted out to sea the following day, damage sustained to the remaining cargo by other shipping containers resulted in them bursting into flames.

Photos of the ship show flames licking out from the shipping containers as columns of grey smoke rose high above the Zim Kingston.

According to the Canadian Coast Guard, it is tracking 35 of the lost containers, including two that contain hazardous flammable materials.

The captain and crew were advised to abandon the ship, according to Canadian authorities, but the crew rejected the advice, saying they wanted to stay and attempt to fight the fire. The crew later left the ship.

Due to the hazardous materials onboard the ship, the Canadian Coast Guard said tug boats could not use water to fight the ongoing blaze on the container vessel.

“Two of the containers have been identified as carrying spontaneous combustibles,” Petty Officer 3rd Class Diolanda Caballero told the Vancouver Sun. “They are currently drifting north but we can't predict which way they will go because of the heavy weather. The bomb cyclone is around that area.”

A “bomb cyclone” occurs when a mid-latitude cyclone's minimum air pressure decreases to below 24 milibars in 24 hours, a process called “bombogenesis”. The lower a storm's pressure, the stronger the storm becomes.

Another bomb cyclone is expected to hit Northern California and the Pacific Northwest throughout the weekend. The storm is expected to drop 2 to 4 inches of rain and produce gusting winds between 30 and 40 mph (48-64kph).

According to AccuWeather, West Coast cities including San Francisco and Sacramento will almost certainly face flooding due to the rain. The outlet did note that those rains could help extinguish ongoing wildfires in the region, but could also produce mudslides.

Winds off the Oregon coast will be even stronger, between 70 and 90mph (113-145kph), which is similar to the winds produced by a Category 1 hurricane.

Those winds will produce waves 40 to 50 feet high in the Pacific ocean, which could cause disruptions to the already strained shipping industry as vessels pilot away from the storms to avoid similar fates to the Zim Kingston.

Former architect who ‘died’ for five minutes reveals where he went

A former British architect from Upper Tysoe, Warwickshire has described the moments when he “died” for five minutes after suffering a cardiac arrest while putting out a house fire.Steve Taylor, 64, and his wife Jo, 53, who own a holiday home together, were having dinner on 14 January when smoke started rising from the side of the house.“We were eating dinner with Jo’s 80-year-old parents when smoke suddenly started pouring through the light fittings in the ceiling and the alarms went off,” Mr Taylor was quoted as saying to PA.He then led the family including his five children out as...
U.K.・24 DAYS AGO
Upworthy

A new trend in treasure hunting called magnet fishing has blown up over the past two years, evidenced by an explosion of YouTube channels covering the hobby. Magnet fishing is a pretty simple activity. Hobbyists attach high-powered magnets to strong ropes, drop them into waterways and see what they attract.
HOBBIES・25 DAYS AGO
Kristen Walters

Sprouts Farmers Market, a popular regional grocery store chain in California, is closing two of its locations on June 3, 2022. Read on to find out which store locations will be affected by the closures.
CALIFORNIA STATE・1 DAY AGO
Newsweek

One man has been arrested after the bear was trapped under the wheel of a tractor and tied to an earth mover.
PUBLIC SAFETY・24 DAYS AGO

Here's what a white towel or paper bag symbolizes when found planted or wrapped around a broken-down or abandoned car.
GAS PRICE・28 DAYS AGO
Newsweek

Troy Staggs found himself in a 47-minute long battle with the huge fish, which measured 4.6 feet and weighed around 55 pounds.
MISSOURI STATE・25 DAYS AGO
The Independent

Scientists have raised alarm over an invasive and aggressive species of worms that are native to Asia and can jump a foot off the ground after they were spotted on the west coast of the United States.The Asian jumping worm, also known as crazy snake worms, Alabama jumpers and Jersey wrigglers is a type of earthworm native to Japan and the Korean Peninsula, which arrived in North America with imported plants.The Amynthas agrestis was first spotted in the US in 2013 in Wisconsin and later across the New England region. In California, these worms were first seen in July 2021...
CALIFORNIA STATE・20 HOURS AGO
Business Insider

I live on a 109-acre horse farm in York County, South Carolina. I do not own but a few of those acres, don’t get me wrong, but the surrounding property is quite large and owned by a friend of mine so I have access to the whole thing. Over the years I have lived there I have really grown fond of privacy.
YORK COUNTY, SC・24 DAYS AGO
Fortune

Sign up for the Fortune Features email list so you don’t miss our biggest features, exclusive interviews, and investigations. Shanghai’s 25 million residents have endured an extreme COVID lockdown for nearly a month—and now a new nightmarish topic is trending on Weibo, the country’s Twitter-like social media platform.
PUBLIC HEALTH・25 DAYS AGO
musictimes.com

Andrew Woolfolk, popularly known for being Earth, Wind & Fire's longtime saxophonist, has passed away at the age of 71; what was his cause of death?. Fellow bandmate Philip Bailey took to Instagram to confirm the tragic news and recalled their early years, saying they met in High School and quickly became friends and bandmates.
BILOXI, MS・24 DAYS AGO
The Guardian

The exponential increase in saltwater crocodile populations in the Northern Territory in recent decades may be partly a result of them preying on feral pigs, new research suggests. Scientists who have analysed the diets of saltwater crocodiles in the Territory believe the reptiles have shifted from marine prey to predominantly...
ANIMALS・24 DAYS AGO

"They might as well just burn us all inside our homes," a user commented online, referring to how the structures are fire hazards.
PUBLIC HEALTH・26 DAYS AGO
Outdoor Life

Paul Williams fought for his life against a large black bear on the afternoon of April 21 outside of his home in Beaubassin East, a rural Canadian community in southern New Brunswick. “She got me in the face, she got me on my arm,” he said, of his wounds estimated...
NEW BRUNSWICK, NJ・24 DAYS AGO
Bridget Mulroy

Near 7.0 Magnitude Earthquake in Pacific

A powerful earthquake hit in a highly volcanic area of the Pacific.(@GeroldGrotelueschen/iStock) An earthquake with an initial magnitude of 7.3 struck Macquarie Island in the Pacific. Later adjusted to 6.7, it was still powerful and enough to give seismologists reason to be on alert.
1 DAY AGO
The Independent

Elephants in mourning have been observed nudging, kicking and dragging their dead herd members.A group of researchers conducted a study into how the Asian elephant responds to death using crowdsourced videos on YouTube.The most common reactions included sniffing and touching – some elephants would rest their trunks on the face of a carcass, others used their legs to shake one.Elephants would often make noise in response to a death and groups would sometimes gather around a carcass trumpeting or roaring in cacophony.Other behaviour was seen more rarely. On three occasions, mothers repeatedly kicked their dead or dying calves.Female elephants...
ANIMALS・2 DAYS AGO
The Independent

First he heard about the body in the barrel.Next he heard that it was murder.And then Geoffrey Schumacher – along with fellow gangster historians and enthusiasts learning the news coming out of a shrinking Lake Mead – thought of one thing: the mob.“This topic is on the lips of everybody in this town,” Mr Schumacher, vice president of exhibits and programs at Las Vegas’ Mob Museum, tells The Independent. “Anywhere I go – especially me – people want to talk about it and speculate about it.“There’s something about solving an old mystery that appeals to people. And it hearkens back...
LAS VEGAS, NV・1 DAY AGO
Seacoast Current

Look Up: Most Intense Meteor Shower We’ve Ever Seen Should Light Up Our New Hampshire, Maine, Massachusetts Skies on May 31

Editor's note: This article was written by a Townsquare Media Northern New England contributor and may contain the individual's views, opinions or personal experiences. Oh I so hope that the burst of thousands of beautiful meteor streams soaring through our skies is the light show it's supposed to be. Talk about getting the chills as thousands of streams of light fly through our sky.
ASTRONOMY・17 HOURS AGO