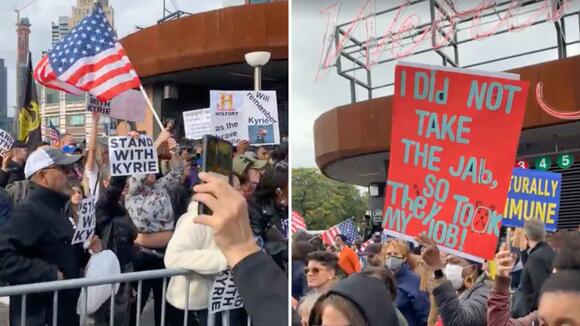 BROOKLYN — Anti-vaccination mandate protestors tried to storm the doors at Barclays Center in Brooklyn on Sunday.

The protestors at Barclays Center were there in support of Kyrie Irving . The Nets player has refused to get vaccinated. The team said Irving would not play or practice with them until he got the COVID vaccine jab.

A small group even broke through barriers and got all the way to the front entrance of the arena about an hour before tipoff.

Protester Curtis Orwell said he and others were fighting for “bodily autonomy and sovereignty,” and the right to choose what goes in their bodies.

“We also know so much more than we knew 18 months ago about the virus,” he said. “We have therapeutics that have been tried and proven to great success. Unfortunately, those kinds of voices are being totally suppressed and censored.”

Orwell said he was not vaccinated and knew some people who had lost jobs because they weren’t.

“It doesn’t feel right to them and that’s OK,” he said. “We need to respect that.”

One of the attendees identified herself as a school teacher. She said she was out of a job because of the mandate .

There was a separate Staten Island protest on Sunday with municipal workers protesting the city’s vaccine mandate.

Fight back against these Nazi's who are trying to take your rights away.❤❤❤Vote Republicans in to save our country and freedoms.

Finally freedom fighters, let’s take back our country. We hired and elected the government well maybe not Biden! But we can fire them like they fired all who didn’t do as they want and take the vaccine.

I love how they used the word "stormed" in this article. So everyone can associate these people with January 6th smh.

NEW YORK — Winner, winner! Four Powerball tickets worth $50,000 were drawn in New York, officials said Monday. They were from the Saturday drawing. The winning tickets had four matching numbers and the Powerball. The winning numbers were: 10-40-45-56-67 and the Powerball is 2. They were sold at: Albemarle Food Center on Albemarle Road in […]
NEW YORK CITY, NY・7 HOURS AGO
PIX11

NEW YORK — A New York City staple has become the latest victim of supply chain issues that have been plaguing businesses for months.  Delis and bagel shops across the city are reporting a cream cheese shortage, according to The New York Times. The newspaper reported many shops start their base mixes with Philadelphia brand […]
NEW YORK CITY, NY・18 HOURS AGO
PIX11

NYC gets ready for holidays amid omicron concerns

An unseasonably mild December day brought crowds to New York City holiday hot spots Monday.  “You don’t often get a day like this in December. It’s beautiful. New York City is coming back. A lot of people are out and about. Bryant Park, seeing it packed like this is just beautiful,” New Yorker Billy Dayan […]
NEW YORK CITY, NY・10 HOURS AGO
PIX11

NEW YORK — We’ve seen him take on different characters on “The Flash.” Well, actor Tom Cavanagh is suiting up to take on yet another character for the hit CW series. Cavanagh returned to the superhero series as part of the five-part “Armageddon” special that continues Tuesday, Dec. 7. Cavanagh told the PIX11 Morning News […]
NEW YORK CITY, NY・18 HOURS AGO

NYC vaccine mandate for private sector workers announced; Key to NYC to include kids 5 to 11

Gil Hodges joined Buck O’Neil, Minnie Miñoso and others in getting chosen for the Hall of Fame on Sunday. Former Minnesota Twins teammates Tony Oliva and Jim Kaat also were elected along with Bud Fowler by a pair of veterans committees. Hodges became the latest Brooklyn Dodgers star from the pennant-winning “Boys of Summer” to […]
MLB・10 HOURS AGO
PIX11

NEW YORK — New York announced three more cases of the omicron variant of the coronavirus on Saturday, bringing the number of state cases linked to the new variant to eight. “The omicron variant is here, and as anticipated we are seeing the beginning of community spread,” state Health Commissioner Mary Bassett said in a […]
NEW YORK CITY, NY・1 DAY AGO

Which cities rank highest for infidelity?

"Cuffing season" is here. And while, typically, that's the time when singles start looking to find a partner with whom to pass the colder months, especially ahead of the holidays, married couples appear to be hooking up as well.
RELATIONSHIP ADVICE・1 DAY AGO
PIX11

EAST VILLAGE, Manhattan — Hundreds of parishioners gathered Sunday at a temporary church on the first anniversary of a six-alarm fire that destroyed Middle Collegiate Church. The church closed its doors to the community on March 12, 2020 because of statewide COVID restrictions. Then a fire ravaged the nearly 130-year-old church in December of 2020. Members of […]
MANHATTAN, NY・1 DAY AGO
PIX11

BAYPORT, N.Y. — A Long Island man allegedly sent hate-filled, threatening letters to people, businesses and organizations connected to the LGBTQ+ community, including a threat to shoot up the 2021 New York City Pride March with “firepower” that would “make the 2016 Orlando Pulse Nightclub shooting look like a cakewalk,” according to a criminal complaint […]
NEW YORK CITY, NY・15 HOURS AGO
PIX11

PIX on Politics panel: A look at omicron and NY governor’s race

NEW YORK — The new omicron COVID-19 variant has raised the alarm and prompted local officials to re-evaluate measures to mitigate the spread of the virus. All this comes as many of New York’s top politicians eye the 2022 race for governor. PIX11’s Ayana Harry, New York Post City Hall Bureau Chief Julia Marsh and […]
NEW YORK CITY, NY・1 DAY AGO

MIDTOWN, Manhattan — Police arrested two men on Monday in connection with two separate fatal stabbings at Penn Station late last month. Brooklyn resident Jamoy Phillip, 26, was charged with murder in the death of Akeem Loney, according to the NYPD.  Loney, 32, was stabbed in the neck while riding a northbound No. 2 train […]
BROOKLYN, NY・12 HOURS AGO
PIX11

Dictionary.com names word of the year for 2021: ‘Allyship’

The site with 70 million monthly users took the unusual step of anointing a word it added just last month, though “allyship” first surfaced in the mid-1800s.
NEW YORK CITY, NY・21 HOURS AGO
PIX11

LOS ANGELES (AP) — Fired CNN anchor Chris Cuomo said he’s dropping his SiriusXM radio show, a decision that followed a sexual harassment allegation. “While I have a thick skin, I also have a family, for whom the past week has been extraordinarily difficult,” Cuomo said in a Twitter post Monday. He said he’s stepping […]
NEW YORK CITY, NY・11 HOURS AGO
PIX11

Does winter feel warmer? In these places, it really is

(NEXSTAR) – The planet has been getting just a little bit hotter every year, but the effects aren’t being felt equally. In the United States, some regions are just 1 or 2 degrees warmer than they were 50 years ago. In other areas, average winter temperatures have jumped 5 degrees Fahrenheit. New data analysis from […]
ENVIRONMENT・2 DAYS AGO

NEW YORK — When there’s magic to be done, it only makes sense to call in an expert. Sabrina Spellman will be making a bewitching appearance on “Riverdale.” The actress who brings the teenage witch to life, Kiernan Shipka, joined the PIX11 Morning News to chat about the crossover episode and more. You can catch […]
NEW YORK CITY, NY・16 HOURS AGO
PIX11

NEW YORK — Restauranteurs in New York braced themselves Monday for a newly announced round of tighter vaccine mandates taking effect this month, during what is perhaps the worst possible time of the year for the industry. Anyone 12 or older who wants to dine indoors at a restaurant, go to a gym or see […]
NEW YORK CITY, NY・6 HOURS AGO
PIX11

HARTFORD, C.T. — Connecticut Gov. Ned Lamont announced the state’s first case of the omnicron variant of COVID-19 Saturday. “We presumed it was already in our state and the information we received from the lab today confirms that fact,” Lamont said. “This likely is not the only case of the variant in the state. That being […]
CONNECTICUT STATE・2 DAYS AGO