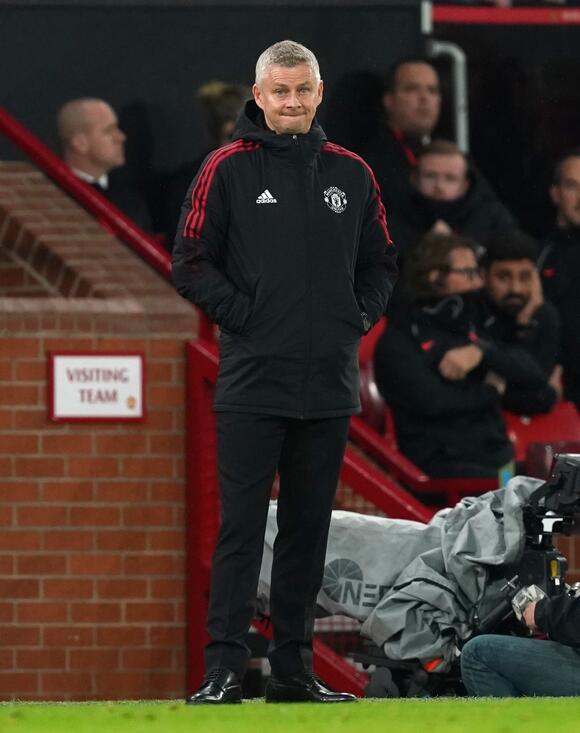 Brought in as interim replacement for Jose Mourinho in December 2018 and handed the permanent position four months later, progress under the 1999 treble hero has come with plenty of ups and downs.

United are now at their lowest ebb under Solskjaer, having seen a meek, error-riddled display ruthlessly punished in a 5-0 defeat to arch rivals Liverpool in front of a shellshocked Old Trafford crowd on Sunday.

It was Liverpool’s biggest ever victory on enemy territory, with early Naby Keita and Diogo Jota goals complemented by a Mohamed Salah hat-trick on an afternoon when Paul Pogba was sent off.

Solskjaer, who signed a new three-year deal in July, called it the “darkest day” of his time as United boss but remains certain that he is the right man for the job.

“Well, the only way I know how to approach life is to wake up tomorrow morning, look forward, of course evaluate what’s gone on, and do my very, very best and be determined to come through  difficult times,” he said.

“This is the worst feeling, you feel rock bottom and the feeling we’ve had, that we are getting to where we want to be, has been there.

This is the worse I've been, the lowest I've been, but, as I’ve said, I accept the responsibility and that is mine today and it's mine going forward.

“But then in the last few weeks we’ve hit a brick wall and the results haven’t come, the performances haven’t come, we’ve conceded too many goals, too many easy goals and that’s a concern.”

The United hierarchy have consistently backed their manager but this humiliation is the biggest test of that support.

Asked if he believes he still has that backing from above, Solskjaer said: “Well, I’ve heard nothing else (on my future) and I’m still thinking about tomorrow’s work.

“Of course, we’re all low. I can’t say now that I’ve felt any worse than this. 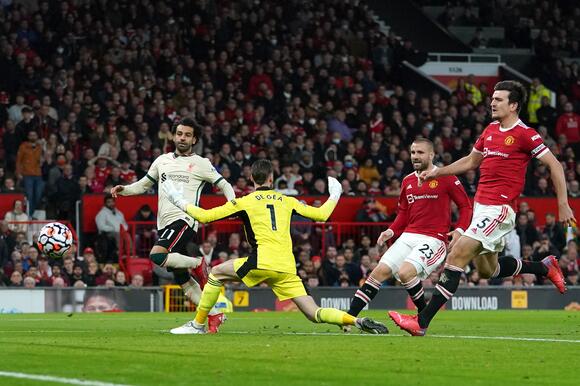 “This is the worse I’ve been, the lowest I’ve been, but, as I’ve said, I accept the responsibility and that is mine today and it’s mine going forward.”

Odds on Solskjaer leaving have tumbled in the wake of United’s fourth successive winless Premier League match, with talk about potential replacements and his position sure to grow in the days to come.

“I do believe in myself, I do believe that I am getting close to what I want with the club,” he added.

“I think what we’ve done, what I have seen, the development. Of course the results lately haven’t been good enough, I have to say, and it’s hands up and that brings doubt in anyone’s mind probably.

“But I’ve got to keep strong and I do believe in what we’ve been doing – the staff, the coaching staff, the players.

“Today’s rock bottom, low in confidence but next week it’s Tottenham away, it’s a Champions League game at Atalanta, the next team who visits us that’s Man City.

“We have to look forward, we have to sort the frames of mind out and make sure we go into the next training session and the next game with the right frame of mind.”

A number of Manchester United’s fringe players feel misled about their playing prospects this season amid growing frustration about Ole Gunnar Solskjaer’s reluctance to rotate despite a dire run of results that have left his future hanging in the balance. Solskjaer was determined to carry a big squad into this...
PREMIER LEAGUE・14 DAYS AGO
BBC

Harry Maguire is a "true example" of a Manchester United player and will prove his critics wrong, says manager Ole Gunnar Solskjaer. United have lost four of their past six Premier League matches, including a 5-0 thrashing by Liverpool in October. Defender and club captain Maguire has been criticised for...
PREMIER LEAGUE・10 DAYS AGO
newschain

Ole Gunnar Solskjaer has urged his Manchester United players to respond positively to the pressure they are facing as questions on his own future at Old Trafford continue. The international break has seen several reports suggest it is a question of when, not if, Solskjaer is replaced after a run of four Premier League defeats in six – including chastening home losses to Liverpool and Manchester City.
PREMIER LEAGUE・10 DAYS AGO
The Independent

Ole Gunnar Solskjaer has backed Harry Maguire to silence his critics as he called his captain a “true example” of what was needed in a Manchester United player.Maguire came in for heavy scrutiny as United lost four of their last six Premier League games before the international break, with their captain criticised for his role in goals conceded in the 4-2 defeat at Leicester, the 5-0 loss to Liverpool and the 2-0 defeat to Manchester City before the international break.But Maguire enjoyed his time away with England as he scored against both Albania and San Marino to become his country’s...
PREMIER LEAGUE・10 DAYS AGO

Can Ole Gunnar Solskjaer survive a 4-1 loss to Watford? We're about to find out after an emergency meeting has reportedly been called by the Manchester United board after the latest loss. The Times in London is reporting that Solskjaer's job will be the topic of conversation at the meeting.
PREMIER LEAGUE・9 DAYS AGO
Telegraph

Nice man, shame about the whole football management thing. Such was the only reasonable response to a soft-soap exit interview posted by Manchester United on Sunday in which Ole Gunnar Solskjaer talked about his tenure and departure from the club that, as he may have mentioned once or twice, he really, really loves.
PREMIER LEAGUE・8 DAYS AGO
Telegraph

The former Manchester United midfielder Darren Fletcher is poised to take temporary charge of the club’s Champions League tie against Villarreal on Tuesday as the curtain comes down on Ole Gunnar Solskjaer’s reign following a crushing 4-1 defeat at Watford. Telegraph Sport understands that Fletcher, 37, who was installed as...
PREMIER LEAGUE・9 DAYS AGO
newschain

Former Manchester United midfielder Paul Scholes believes caretaker boss Michael Carrick, assistant Mike Phelan and first-team coach Kieran McKenna should have left the club with Ole Gunnar Solskjaer, saying he would be “embarrassed” to be staying on. The Norwegian’s three-year tenure came to an end when he was dismissed in...
PREMIER LEAGUE・6 DAYS AGO

Manchester United's soon-to-be new manager once called Cristiano Ronaldo "too old and too expensive." Ralf Rangnick made the comment when asked if he would sign Ronaldo for RB Leipzig in 2016. It is a worrying sign for the Portuguese forward's future at Old Trafford. Manchester United's soon-to-be new manager Ralf...
PREMIER LEAGUE・2 DAYS AGO
The Independent

Billy Gilmour says he is “loving football” under new Norwich boss Dean Smith following the Canaries’ goalless draw with Wolves at Carrow Road.Wolves were able to hold off Norwich’s pressure to secure a point in Smith’s second game in charge.The Canaries had only one victory to their name when Smith replaced Daniel Farke just eight days after his own dismissal at Aston Villa but the Canaries have taken four points from his first two games.Chelsea loanee Gilmour had impressed during Smith’s first game in charge – a 2-1 home win over Southampton – and put in another solid...
PREMIER LEAGUE・1 DAY AGO
90min.com

Under-fire Manchester United boss Ole Gunnar Solskjaer believes that he is still the man to lead the club and is confident he can arrest their current form. United were thrashed 4-1 by Watford on Saturday after yet another embarrassing performance. Goals from Josh King and Ismaila Sarr saw the hosts race into a two-goal lead, before substitute Donny van de Beek - who has barely played under Solskjaer - pulled one back.
PREMIER LEAGUE・9 DAYS AGO
90min.com

Manchester United are expected to sack manager Ole Gunnar Solskjaer following Saturday's humiliating 4-1 loss to Watford, with Darren Fletcher to step in as a caretaker replacement. United bosses called an emergency meeting in light of the result as the Red Devils fell to their fifth Premier League defeat of...
PREMIER LEAGUE・9 DAYS AGO

Insider spoke to Mikaël Silvestre, who played with Ronaldo during his first spell at United. Silvestre said teammates used to kick Ronaldo in training when he was trying too many tricks. "If you ask him, he will tell you that there was no mercy," Silvestre said. Cristiano Ronaldo's teammates from...
PREMIER LEAGUE・5 DAYS AGO
ClutchPoints

Manchester United interim manager Michael Carrick benched Cristiano Ronaldo for his team’s crucial Premier League encounter with Chelsea. Carrick explained to Sky Sports his decision to leave out his top goalscorer this season. As per Goal:. “Cristiano is probably our standout name, but it’s just gameplan, ideas. I had a...
PREMIER LEAGUE・1 DAY AGO
Yardbarker

Ole Gunnar Solskjaer has sent a message of support to Manchester United ahead of their clash with Villarreal. Solskjaer won’t be in charge for what is a crucial Champions League clash on Tuesday night. The Norwegian was sacked on Sunday morning, on the back of a 4-1 defeat to Watford,...
PREMIER LEAGUE・7 DAYS AGO
Yardbarker

In recent years, Manchester City have appeared to be on a mission to vacuum up as much of world football's young talent as possible. Typically, the club will sign a promising youngster from a foreign league and immediately send them on loan to a City Football Group affiliate club until they see the player fit to sell for a profit.
PREMIER LEAGUE・12 DAYS AGO
The Independent

Manchester City manager Pep Guardiola has all but ruled out ever taking charge of another club in England The Spaniard is contracted at the Etihad Stadium until 2023 and could extend that, but expects to work elsewhere at some point in the future.Although he has expressed an interest in international football, the 50-year-old admits he has no clear vision of where his long-term future lies.I don't think I am going to train another club in England. I'm a part of this club.Pep GuardiolaOne thing he is sure about, however, is that he cannot see himself being employed by another Premier...
PREMIER LEAGUE・2 DAYS AGO
SkySports

Manchester City manager Pep Guardiola says midfielder Kevin De Bruyne has tested positive for Covid-19 and is self-isolating. De Bruyne, who will miss City's trip to Everton on Sunday, returned a positive test during the international break after playing in both of Belgium's World Cup qualifiers against Estonia and Wales.
PREMIER LEAGUE・10 DAYS AGO
The Independent

Tottenham boss Antonio Conte is enjoying being back in the Premier League despite the situation he inherited at his new club.Conte laid bare just how big a job he has on his hands after Spurs’ European embarrassment in midweek, where they lost to Slovenian minnows NS Mura – the lowest ranked team in the Europa Conference League.Conte was forced to admit after the humiliation that the level of his squad is “for sure not so high” and that he has reservations over its limitations.The Italian chose to return to the Premier League four years after he was sacked at Chelsea...
PREMIER LEAGUE・2 DAYS AGO
San Diego Union-Tribune

Ten-man Tottenham conceded a late goal and fell to a humbling 2-1 loss to lowly Slovenian team NS Mura in the Europa Conference League, a result that puts the London club in danger of being eliminated from the third-tier competition
PREMIER LEAGUE・4 DAYS AGO