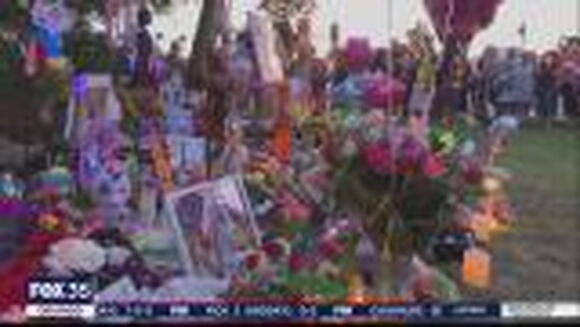 The family of Brian Laundrie was meeting on Sunday “to grieve”, their lawyer told The Independent – but there are no plans to hold a funeral for the 23-year-old in the future.

Mr Laundrie was at the centre of an interstate manhunt before his remains were identified last week in a Florida swamp.

The Long Island native was wanted in connection with the death of his girlfriend, Gabby Petito – who had last been heard from at the end of August.

The young couple set off in July on a cross-country trip they were documenting on social media. An altercation between the two prompted a police callout in Utah the following month, and Ms Petito vanished soon after – though Mr Laundrie drove her van back to Florida without her.

He and his family refused to cooperate with police as Ms Petito’s family clamoured for answers. Then his parents reported Mr Laundrie missing – days before his girlfriend’s body was found 19 September in Wyoming near the last place she was seen.

The cause of death was ruled a homicide.

Ms Petito was laid to rest on Long Island, where she grew up – but the Laundries’ lawyer, Steve Bertolino, told The Independent on Sunday there would be no such public service for Mr Laundrie.

“The remains will be cremated and turned over to the family,” he said. “There’s no funeral plans at all.”

He said there was “nothing new” with the family other than their private mourning and “we’re not pursuing anything”.

The Laundries have been beset by protesters outside of their Florida home for weeks as the public demands answers in the death of Ms Petito. They have also found themselves at the centre of conspiracy theories surrounding the discovery of their son’s remains; he was identified with dental records after the remains were found in an area that had been repeatedly and thoroughly searched.

Ms Petito’s family has established a foundation in her name, with the first fundraiser scheduled earlier this month on Long Island. The foundation site sells ‘Justice for Gabby’ merchandise and tells the young victim’s story.

“The mission of the foundation is to address the needs of organizations that support locating missing persons and to provide aid to organizations that assist victims of domestic violence situations, through education, awareness, and prevention strategies,” the new website states. Ms Petito’s parents and step-parents are listed as board members.

“We wish to turn our personal tragedy into a positive,” the mission statement continues. “It is our hope that Gabby’s foundation will bring these important issues into the forefront of the public eye to the benefit of all our communities.”

Why wouldn’t they have at least a small memorial for him. There is something wrong and very sad about this. There has to be more to it does anyone else feel that way?

They are not planning a funeral because he is not dead . You can't make an absolute positive ID with a partial dental match . Why are they not doing a DNA match which is positive proof of a match . Their lawyer could have paid off the dentist to put in partial dental records which match the partial skull found . It might be a cadaver from a medical school . The cadaver dogs did not alert on the body the first time because it wasn't there .

All the time they gave these killers time to think up something, they got bones from grandpa dug them up and that is why they were so clean old bones, then they put them there where they magically found his stuff and his bones, man this family even beat the cadaver dogs, wow bullshit something not right. Brian is still hiding and still alive. The mom or dad or sister were not crying and they didn’t meet like a family together, something not right about FBI letting family be looking for him, bullshit and they found the stuff they walk right where his stuff was planted. This whole situation should be investigated sounds like an unbelievable soap opera. Now no funeral service. Weird.

(CNN) — Brian Laundrie's parents discovered a handgun was missing when they voluntarily surrendered their firearms to law enforcement the same day they informed authorities that their son was missing, according to the family's attorney, Steven Bertolino. Bertolino's comments come days after a Florida medical examiner confirmed Laundrie, who was...
NORTH PORT, FL・7 DAYS AGO
WINKNEWS.com

Brian Laundrie died by suicide, according to the attorney representing his family. Laundrie, 23, was a person of interest in the death of his fiancee 22-year-old Gabby Petito. “Chris and Roberta Laundrie have been informed that the cause of death was a gunshot wound to the head and the manner of death was suicide,” said the Laundrie attorney Steven Bertolino.
LEE COUNTY, FL・10 DAYS AGO
news4sanantonio.com

NORTH PORT, Fla. (CBS12) — The parents of Brian Laundrie, the man wanted for questioning in the killing of 22-year-old Gabby Petito, says they discovered their gun missing just after Laundrie himself vanished. Steven Bertolino, the attorney for the Laundrie family, said the parents surrendered their guns to law enforcement...
NORTH PORT, FL・6 DAYS AGO
PIX11

ST. PETERSBURG, Fla. — Brian Laundrie, the fiancé of Long Island-native Gabby Petito, killed himself with a gunshot to the head, according to autopsy results revealed by the Laundrie family’s attorney on Tuesday. The attorney representing Chris and Roberta Laundrie released a statement saying the couple continues to mourn the loss of their son and hopes […]
SAINT PETERSBURG, FL・10 DAYS AGO

Some legal experts are saying that even though Laundrie was the lone suspect in Gabby Petito's death, it’s possible other people could be charged in the case.
SACRAMENTO, CA・5 DAYS AGO
UPI News

Nov. 23 (UPI) -- Brian Laundrie died from a self-inflicted gunshot wound to the head, an attorney for his family announced Tuesday. Steven Bertolino, an attorney for Brian Laundrie's parents, said they received the results of a second autopsy just about one month after his skeletal remains were found in a Florida park.
PUBLIC SAFETY・10 DAYS AGO
Washington Post

She mistakenly called a stranger across the country 20 years ago. The two became friends — and finally just met in person.

Gladys Hankerson was at her home in Delray Beach, Fla., about 20 years ago when she picked up the phone to call her sister. She didn’t realize that when she dialed, she mistakenly transposed two digits in the number. Her sister, who lived in Somerset County, Md., had a 410...
DELRAY BEACH, FL・1 DAY AGO
Radar Online.com

Brian Laundrie’s parents, Christopher and Roberta, were spotted for the time since their son committed suicide. The duo was caught taking a walk in the woods at the location where the 23-year-old's remains were found. Article continues below advertisement. On Tuesday, November 30, the Laundrie’s took a tour around Myakkatchee...
PUBLIC SAFETY・2 DAYS AGO

Brian Laundrie's parents are putting a hoax to rest after a sign was placed on their property Tuesday. According to the family's lawyer, Steven Bertolino, the for sale sign placed in front of their property is nothing but a hoax placed there by a third party. "It was either photoshop...
PUBLIC SAFETY・1 DAY AGO
ssnewstelegram.com

Dear Annie: I need help. I've let my niece move in with me, my husband and my 17-year-old daughter after her husband committed suicide. You see, she and her husband had issues for the last two years. They were both on drugs. I felt sorry for her after he passed. She has a sister and a 16-yearold son. Her son lives with his best friend and his family. My niece signed over custody to his mom, so she doesn't have many responsibilities.
FAMILY RELATIONSHIPS・14 DAYS AGO
The Independent

A transgender woman was badly beaten after being forced to share a jail cell with three men last year, leaving her with a jaw fractured in two places, according to a lawsuit.Kristina Frost is suing San Diego County and its sheriff’s department for damages, accusing them of negligence and failure to protect or deliberate indifference to safety risks and needs.According to the lawsuit, Ms Frost’s driver’s licence and other paperwork said she was a woman, and she had been wearing “feminine” clothes at the time of her booking.However, she was placed against her wishes in a “minimally monitored” cell with...
PUBLIC SAFETY・18 DAYS AGO
CBS Baltimore

UPDATE: Baltimore Police said they have located the child’s family and that the family is communicating with Child Protective Services. Update: Please cancel the lookout for the little guy’s family. They have been located and are communicating with Child Protective Services — Baltimore Police (@BaltimorePolice) November 29, 2021 BALTIMORE (WJZ) — Baltimore Police are asking for the public’s help to identify a young boy walking in the street alone early Saturday morning. The boy is about 3 to 4 years old. He didn’t know his name or address when officers found him about 3 a.m. in the 2000 block of Kennedy Avenue after responding to a call about child neglect. The boy was taken to Johns Hopkins Hospital for an evaluation but appears to be in good condition. The Department of Social Services is trying to find the boy’s guardian or parents. If you know the boy’s identity, call 410-396-2433.
BALTIMORE, MD・6 DAYS AGO

A US policeman, already facing up to 20 years in prison for leaking a video of his fellow officers slapping and swearing at a dying black man, has been removed from his force for alleged misconduct. Sergeant Javier Esqueda, a 27-year veteran of the Joliet Police Department in the suburbs...
LAW ENFORCEMENT・17 DAYS AGO
Daily Beast

The family of Sativa Transue, a 26-year-old American woman from Spokane, Washington who was found dead in her Cancun hotel room while on vacation with her boyfriend, said she looked like she had been “beaten to a bloody pulp” when Mexican authorities discovered her body on Saturday. “I received a...
PUBLIC SAFETY・2 DAYS AGO
Complex

A New York man who once shared a cell with R. Kelly was sentenced Monday to 19 months in prison for threatening to kill politicians in Washington D.C., per the U.S. Attorney’s Office for the Eastern District of New York. In April, Brandon Hunt, 37, was convicted of threatening to...
PUBLIC SAFETY・11 DAYS AGO
CNN

The fatal shooting of a Black man in a trailer park is rocking a rural community in Missouri as neighbors who say they witnessed the killing dispute the police narrative of events. Justin King, a 28-year-old Black and Filipino man, was shot Nov. 3 at 11:45 a.m. in the small...
MISSOURI STATE・3 HOURS AGO
Daily Beast

Amy Carlson, the leader of a New Age sect known as Love Has Won, died due to a decline brought on by alcohol abuse, anorexia, and dosing colloidal silver, according to an autopsy report from the El Paso County Coroner’s Office in Colorado. Mystery initially shrouded Carlson’s death after her...
CRESTONE, CO・1 DAY AGO
Radar Online.com

A man from Spokane, Washington, Taylor Allen, was arrested in Mexico after allegedly murdering his girlfriend Sativa Transue during the couple's Thanksgiving trip abroad. Transue was found dead in their hotel room by a maid after guests at the hotel "heard screams in the middle of the night," according to Front Page Detective.
PUBLIC SAFETY・1 DAY AGO
cwbchicago.com

Man on electronic monitoring for robbing a store is accused of leaving home to rob another store this week. His efforts were foiled.