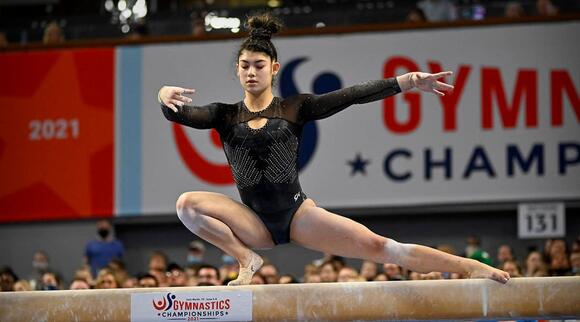 Leanne Wong and Kayla DiCello brought home silver and bronze medals in the all-around while Stephen Nedoroscik became the first American to win a world title on pommel horse.

Less than three months after the closing ceremony of the Tokyo Olympics, 312 elite gymnasts returned to Japan to compete in the Artistic Gymnastics World Championships.

The competition in Kitakyushu provided something of a redemption tour for American athletes Leanne Wong and Kayla DiCello. Both traveled to Tokyo over the summer as alternates but neither performed in Olympic competition.

With multiple individual medals up for grabs at the world championships, which did not include a team competition, the pair seized the opportunity to bring home some hardware.

In the all-around final, Wong won silver with high execution scores and solid performances on balance beam and floor exercise. Her final score of 56.340 was just 0.292 behind champion Angelina Melnikova.

The Russian gymnast outscored Wong on vault and the uneven bars while performing some of the most difficult routines among the competitors in the final. Melnikova’s all-around gold medal snapped an American winning streak that stretched back to 2011.

DiCello joined Wong on the podium, clinching bronze with strong routines on beam and floor. The 17-year-old led the field after posting a 14.600 on vault in the first rotation, but a fall on bars temporarily dropped her out of the top three. DiCello rebounded well on beam and sealed a medal with a floor set that featured powerful tumbling passes. She finished with a total score of 54.566.

Wong added a bronze to her medal collection Sunday when she scored a 13.833 to place third in the floor event final. After spending most of her Olympic experience in quarantine after being in close contact with another gymnast who tested positive for COVID-19, the 18-year-old now carries two medals to the University of Florida, where she plans to compete in NCAA gymnastics competition beginning in January.

In the men’s events, Team USA picked up two medals and made some history. Pommel horse specialist Stephen Nedoroscik became the first-ever American to win a world title on the event, and Brody Malone snagged a bronze on high bar.

While American gymnasts have had recent success on high bar, pommel horse has traditionally been Team USA's weakest apparatus. Before Nedoroscik posted a massive 15.266 in the event final to finish atop the podium, the U.S. had previously won just two other world medals on pommel horse. The most recent was a bronze in 2006.

Malone earned a 14.966 on high bar and was initially in a tie for third with Italy’s Carlo Macchini, but the American received a higher execution score and thus won the tiebreak to claim a spot on the podium.

In the men’s all-around final, Yul Moldauer placed fourth, which was the best finish for an American man since Jonathan Horton won bronze at the 2010 world championships.

A 24-year-old canoeist who won medals on the world stage and was honored in Ukraine has died just two weeks after being diagnosed with Covid-19. The Canoe Federation of Ukraine announced the death of ten-time world and European medalist Bizu Borislav shortly after he tested positive for the coronavirus. The...
PUBLIC HEALTH・3 DAYS AGO
RunnersWorld

Former US Olympic sprinter Emmit King killed in a shootout

Former US track and field star Emmit King was shot dead along with another man, William Wells, after an argument ended in gunfire in Bessemer, Alabama last weekend. King was pronounced dead at hospital following the shootout between the two men. The retired sprinter had a prestigious track career in...
BESSEMER, AL・1 DAY AGO
olympics.com

None of the 17 Indian karatekas competing at the World Karate Championships 2021 in Dubai managed to make the medal round in their respective categories at the Hamdan Arena. Indians competed in the men and women’s individual kumite, individual kata and team kumite events while only the men took part in the team kata event. The tournament ran from November 16 to 21.
WORLD・13 DAYS AGO
smilepolitely.com

On Saturday, the Parkland College volleyball team, a three-seed, beat number one overall seed Cowley County Community College to win the NJCAA DII National Championship Title. The last time they won the national title was 2016. The Cobras finished the season 56-3. You can read more about the match here.
CHAMPAIGN COUNTY, IL・12 DAYS AGO

LAKE PLACID — The International Bobsleigh and Skeleton Federation Para Sport World Cup opened up its season with a two-day para-bobsleigh event at Mount Van Hoevenberg in Lake Placid on Monday. The event showcased some of the best para-bobsledders in the world representing seven different nations. The United States, led...
LAKE PLACID, NY・8 DAYS AGO
GolfWRX

Jin Young Ko put on a nerveless display to see off the challengers at the CME Group Tour Championship and take home $1.5 million on Sunday – the biggest winner’s check ever on the LPGA Tour. Ko’s win also gave her the title of Player of the Year. While Nasa...
GOLF・12 DAYS AGO
Post-Bulletin

• Natalya Franz, Winona/Cotter: With the graduation Chloe Hughes, it is Franz who will be the leader for the Winhawks. The junior is a two-time state qualifier, competing on the uneven bars, beam and the vault at last year's Class A state meet. Her best finish at state came on the bars with a score of 8.850, for 14th place. She had won the Section 1A uneven bars title with a score of 9.400. She was also named to the All-Big Nine team.
SPORTS・7 DAYS AGO
Ledger-Enquirer

Germany’s Francesco Friedrich has extended his streak to 34 consecutive World Cup two-man races with a medal, guiding his sled to an easy win over countryman Johannes Lochner on Saturday. Friedrich and brakeman Thorsten Margis finished two runs in 1 minute, 43.48 seconds. Lochner and Christian Rasp were second in...
SPORTS・6 DAYS AGO

Seconds after Sarah Thompson tore her Achilles tendons back in May of 2019, the Davis native was planning her comeback to the competitive tumbling world. Last weekend she capped it all off by helping the USA Team take fifth place at the Trampoline Gymnastics World Championships in Baku, Azerbaijan. ...
ROCKFORD, IL・5 DAYS AGO
San Diego Union-Tribune

The chess champion has used a boom in chess interest to turn his fame and dominance in the age-old game into a major business.
CELEBRITIES・2 DAYS AGO
Boxing Scene

CALI, COLOMBIA - Team USA finished the final day of the first ever Junior Pan American Games with five gold and three silver medals for a total of 12 medals, the most by any team competing in Cali, Colombia. Julius Ballo (San Diego, Calif.) grabbed the first gold of the...
SPORTS・2 DAYS AGO

CINCINNATI (WKRC) – Nippert Stadium is going to be loud Saturday night. The fourth-ranked college football team in the nation is playing for more than a conference championship: The Bearcats want a spot in the College Football Playoffs, and the spirit squads are prepared to bring the energy. Bearcat Football...
CINCINNATI, OH・18 HOURS AGO
BBC

The next five World Championships will be broadcast by BBC Sport after an extension to its World Athletics deal. The new agreement also covers three more World Indoor Championships, including the 2024 event in Glasgow. The 2022 World Championships are in Oregon in August, with Britons Dina Asher-Smith and Katarina...
SPORTS・1 DAY AGO
San Diego Union-Tribune

The NCAA football oversight committee on Thursday approved a waiver to the deadline for bowl certification so another game can be added to this season's lineup, upping the total to 42 and ensuring all teams that finished 6-6 can play in the postseason
SAN DIEGO, CA・1 DAY AGO
Sports Illustrated

Shuster’s Other Five In Eight

The generically titled “Olympic Qualification Event” starts on Sunday. It’s going to put the final eight curling teams into the Olympics: two mixed doubles, three women’s, and two men’s. This is the third OQE in history; prior to that, it was all world championship rankings. The 2013 one featured eight men’s and seven women’s teams. Japan and China advanced through the women’s side and would go on to contend for medals but missed the playoffs by a single game.
SPORTS・20 HOURS AGO
ESPN

KEARNS, Utah -- Erin Jackson won her fourth World Cup speedskating gold medal of the season Friday, taking the 500 meters on home ice at the Utah Olympic Oval. Skating in front of family and friends, the 29-year-old American finished in 36.809 seconds, breaking the American record of 36.90 set by Heather Richardson in a World Cup meet at the oval in 2013.
KEARNS, UT・18 HOURS AGO
San Diego Union-Tribune

The 21 Greatest Two-Sport Stars Ever

Los Angeles Angels star Shohei Ohtani was the unanimous AL MVP in 2021, after starring as both a batter and a pitcher throughout the season. The two-way sensation crushed 46 home runs while also posting a 9-2 record with a 3.18 ERA on the mound, becoming the first player in MLB history to make the […]
NFL・1 DAY AGO
Sports Illustrated

Last season, the Hero World Challenge was canceled due to the pandemic, but it's back in action this year from Albany. Henrik Stenson won by one stroke over Jon Rahm in 2019, whereas Rahm won in 2018 by four strokes over Tony Finau. This is often a showcase of the best golfers in the world, with Tiger Woods winning this event five times in 21 years to go with five more second-place finishes overall.
TV & VIDEOS・2 DAYS AGO