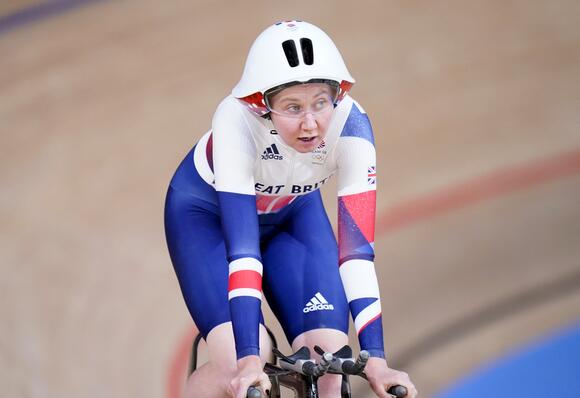 Katie Archibald took her fourth medal of the 2021 UCI Track Cycling World Championships as she claimed silver in the points race on the final day in Roubaix, France.

The Briton was second behind Belgium’s Lotte Kopecky with 72 points, four behind the champion and 12 better off than third-placed Kirsten Wild of Holland.

The silver added to Archibald’s omnium gold and the bronzes she had secured in the team pursuit and madison.

The 27-year-old, who won her second Olympic gold medal with victory in the madison in Tokyo during the summer, said: “[I’m] really pleased.

“It’s almost like the harder it is, the happier you are. I really struggled there, and I think that was all I had. When you’re fighting for something and you get it… maybe at 20 laps to go I realised I was fighting for silver, so it felt like a victory.”

It was the only medal for Great Britain on the concluding day of action, with Ethan Hayter and Ollie Wood finishing fourth in the madison, and Ethan Vernon sixth in the elimination race.

GB ended up with an overall tally of eight medals from the championships, including two golds – Hayter was the men’s omnium champion.

Head coach Jon Norfolk said: “We wanted to come here to perform, good performances from our athletes is what we were looking for, whether that resulted in a medal or not – sometimes performance and result can be two different things.

“I think the average age is 23 years old in the squad, so we have experienced Olympians who have extended their season to come here, and we have younger athletes for whom this is their first World Championships, and some of those have medalled, which is really encouraging.

“It really kind of fuels that enthusiasm and momentum we want to create for Paris [the 2024 Olympics].”

The UCI Track Champions League continues on Saturday, November 27 with its second round at the Cido Arena in Panevėžys, Lithuania. The velodrome, which opened in 2008 and hosted the European Championships in 2012, will host the new action-packed racing format where the endurance leaders Katie Archibald (Great Britain) and Corbin Strong (New Zealand) will try to defend their lead from the first round in Mallorca.
CYCLING・2 DAYS AGO
BBC

With the Alpine skiing World Cup returning to North America for the first time in two years, Mikaela Shiffrin can't wait to race in front of a home crowd again
SAN DIEGO, CA・2 DAYS AGO
alamedasun.com

Alameda Soccer Club Islanders U10 Girls soccer team earned second place in the 2021 NorCal Premiere State Cup Gold 2 division. To earn their spot in the championship they beat top teams from some of Northern California’s top soccer clubs including Mustang Soccer 4-2, CenCal Cosmos 7-1 and Davis Legacy 1-0. The Islanders created multiple scoring opportunities in the championship game but lost 1-0 in a very competitive battle with Marin FC. The team is coached by Adam Garfinkle, Adam Butler and Daniele Moreria.
ALAMEDA, CA・12 DAYS AGO

Britain's four-man bobsleigh team of Brad Hall, Greg Cackett, with Nick Gleeson and Taylor Lawrence won silver at the World Cup in Austria. It was a second medal of the weekend for Hall and Cackett, having won bronze on Saturday in the two-man event. "It's been a great weekend. We've...
WORLD・7 DAYS AGO
AFP

The women's World Cup giant slalom at wind-whipped Killington, Vermont, was cancelled Saturday after just nine skiers completed the first run. The start of the race had been delayed by half an hour as officials made adjustments to the course amid heavy winds and blowing snow. French veteran Tessa Worley, whose resume includes 14 World Cup giant slalom race wins and two world titles, had posted the fastest time of 49.56sec. Reigning World Cup champion Petra Vlhova of Slovakia was second-quickest in 49.74.
SPORTS・1 DAY AGO
ESPN

YANQING, China -- Madeleine Egle of Austria won the first World Cup women's singles gold medal of her career, prevailing Sunday in the season opener on the track built for this winter's Beijing Olympics. USA Luge got its first medals of the World Cup season later Sunday, with the team...
SPORTS・7 DAYS AGO

Kenneth Judd may be 99-years-old, but he is a cycling tour de force. The almost centenarian last month gained a silver medal in a global cycling competition that had more than 5,000 entrants. To win second place Mr Judd pedalled 2,348 miles (3,779 km) over 26 days. That's an average...
CYCLING・7 DAYS AGO
teamusa.org

Chris Mazdzer and Jayson Terdiman react after finishing their 2nd run in the Men's Doubles during Day 2 of the 50th FIL Luge World Championships 2021 on Jan. 30, 2021 in Koenigssee, Germany. The U.S. luge team got to test out the track on which they’ll be sliding at the...
SPORTS・8 DAYS AGO
teamusa.org

YANQING, China – After winning a silver medal in the season-opening World Cup team relay Sunday, it will be a happy American luge team that boards the charter flight Monday out of Beijing. The event, that featured USA Luge athletes Ashley Farquharson and Tucker West in singles, and the doubles...
SPORTS・8 DAYS AGO
teamusa.org

US Speedskating’s season-opening performance in Poland announced to the world that the team is a World Cup podium contender in several distances. After another big weekend in Norway, the skaters’ collective display delivered a promise of relentless consistency. US Speedskating recorded more strong results on Stavanger, Norway’s ice in the...
SPORTS・8 DAYS AGO
Wicked Local

KINGSTON - Pembroke High and Silver Lake football have had some lob sided scores over the past few seasons, but the pendulum swung the other way in the latest game of the Thanksgiving rivalry. The Lakers reached deep into the playbook for a triple-reverse pass in the final minute of...
PEMBROKE, MA・2 DAYS AGO
teamusa.org

Seven-time Olympic Gold medalist Katie Ledecky has not only made a splash at the past three Olympic Games but she’s also solidified herself as an authentic brand ambassador. She works with various global brands thanks to her innate ability to connect with consumers easily.
SPORTS・4 DAYS AGO
olympics.com

You can never be certain about what will happen until you cross the finish line. That’s short track in a nutshell. Unlike long track speed skating, in short track, six skaters race against each other, bumping into each other as they jostle for position, which leads to regular crashes. The fact that they are required to wear helmets gives you some idea of the sometimes chaotic nature of the sport. And spectators are used to seeing thrilling, lightning-fast races where nobody knows what will happen until the very end.
SPORTS・3 DAYS AGO
Commonwealth Journal

Friedrich gets another Cup win, this time in 4-man bobsled