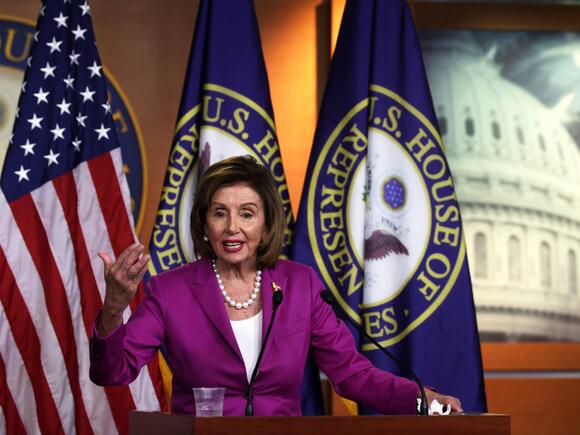 House Speaker Nancy Pelosi dodged a question on Sunday over whether she would seek re-election as speaker if Democrats maintained control of the House of Representatives after the 2022 midterms.

Pelosi has led Democrats in the House since she was first elected speaker in 2007, making history as the first woman to hold the position . CNN's Jake Tapper asked her Sunday morning if she would seek to continue to seek that position.

"You think I'm going to make an announcement right here and now?" Pelosi, a Democrat from California, responded.

"You're gonna run for re-election though, yes?" Tapper said.

"Why would I tell you that now?" Pelosi said while laughing.

"It's not just me, it's the American people. It's the world. This is an international show," Tapper said.

US elections in November 2022 will determine if Democrats maintain control of the House and whether Pelosi would be eligible to remain the speaker.

"Probably I would have that conversation with my family first if you don't mind," Pelosi said. The California Democrat was on CNN's State of the Union to discuss the reconciliation bill , the spending plan that is the cornerstone of President Joe Biden's agenda.

Former Wisconsin GOP Rep. Paul Ryan served as speaker from 2015 to 2019 before Pelosi was re-elected House speaker when Democrats took back control of the chamber.

Earlier this month, former President Donald Trump encouraged his supporters not to vote in 2022 or 2024 unless the Republican party backed his disproven election fraud claims. Republicans like Rep. Marjorie Taylor Greene of Georgia pushed back on Trump's comments, telling Republicans to "stop listening to grifters telling you not to vote."

Pelosi's office did not immediately respond to Insider's request for comment.

Listen Nancy! We The People, don't want you around at all, Period! You and your poison spewing yap, should have never been able to have passed the ethics part of your assesment! NO DEMOCRATE SHOULD HAVE!!! ALL OF YOU HAVE FAILED YOU OATHS!!!

you have to be the majority party in order to be elected speaker. the Dems have failed the American people. 2022 will loose their majority. They are really hurting the people.

Nancy go get your $15 icecream, while Americans paying more for everything everyday. You old dimwit, you don't care about your own District that alone America, how much protection fo you get while you liberal scumbags what to defund police more money for total bullshit in put into these bills. And how many times have you taken stock tips, etc. You snd the liberals ruining America everywhere.

Sen. Amy Klobuchar said 'some pro-choice Republicans' might get on board with codifying Roe v. Wade into law

Sen. Amy Klobuchar suggested codifying abortion rights into law could be the solution to protecting abortion access. Klobuchar said some "pro-choice Republicans" have signaled support for the idea. Her comments come as the US Supreme Court heard arguments last week in a case that could gut Roe v. Wade. Sen....
CONGRESS & COURTS・1 DAY AGO
Reuters

WASHINGTON, Dec 5 (Reuters) - U.S. Representative Ilhan Omar said on Sunday that she is confident House Speaker Nancy Pelosi will take "decisive action" in coming days against Republican congresswoman Lauren Boebert, for remarks about Omar that have been decried as Islamophobic. Boebert described Omar, a Muslim who was born...
CONGRESS & COURTS・1 DAY AGO
Markets Insider

The congressman was in the Capitol the day it was stormed by Trump supporters, and led the impeachment prosecution. The fight, he says, is far from over. Chris Bryant: ‘Nearly everyone I meet says: “I wouldn’t want your job”’. He spent 5 January at a graveside service for his son,...
CONGRESS & COURTS・1 DAY AGO

It is a festive family photo with seven broad smiles and a Christmas tree. But one other detail sets it apart: each member of the Massie family is brandishing a machine gun or military-style rifle. The photo was tweeted last week by Thomas Massie, a Republican congressman from Kentucky, with...
POLITICS・5 HOURS AGO
Rolling Stone

Ilhan Omar: Kevin McCarthy Is a ‘Coward and a Liar’ for Not Condemning Boebert’s Islamophobic Comments

Rep. Ilhan Omar (D-Minn.) called Republican Minority Leader Kevin McCarthy a “liar and a coward” for his refusal to condemn remarks by Rep. Lauren Boebert (R-Colo.) where she suggested that Omar, a Muslim who wears a hijab, was a terrorist who might detonate an explosive device in the Capitol. But, Omar said, she is “confident” that House Speaker Nancy Pelosi will take “decisive action” against Boebert. Omar called Boebert’s comments “shocking” and “unacceptable” during an interview with Jake Tapper on Sunday, adding, “It’s very unbecoming of a congresswoman to use that kind of derogatory, dangerous, inciting language against a colleague.” Since video...
CONGRESS & COURTS・1 DAY AGO
Laredo Morning Times

House Speaker Nancy Pelosi, D-Calif., invoked a phrase relegated to sex education classes and uncomfortable parent-child conversations in a Thursday press conference. A day after the Supreme Court heard the first arguments on Dobbs v. Jackson Women’s Health Organization, a major Supreme Court case that could overrule Roe v. Wade entirely, Pelosi excoriated select members of the highest court of the nation for their views on abortion.
CONGRESS & COURTS・2 DAYS AGO
The Independent

Turning outrage into power: How far right is changing GOP

House Minority Leader Kevin McCarthy appears to have settled on a strategy to deal with a handful of Republican lawmakers who have stirred outrage with violent, racist and sometimes Islamophobic comments. If you can't police them, promote them. The path to power for Republicans in Congress is now rooted in the capacity to generate outrage. The alarming language, and the fundraising haul it increasingly produces, is another example of how Donald Trump the former president, has left his mark on politics, changing the way Republicans rise to influence and authority.Success in Congress, once measured by bills passed and...
CONGRESS & COURTS・19 HOURS AGO

In a blurb on the cover of Mark Meadows’ new book, Donald Trump calls the former congressman a “great chief of staff – as good as it gets” and predicts “a great future together”. The former president has also promoted the book to his followers. Now the book is in...
POTUS・2 DAYS AGO
Fox News

Former Senate Majority Leader Bob Dole died Sunday morning at age 98, prompting a flurry of reactions and condolences from Republicans and Democrats alike commemorating his nearly four decades of service. "It is with heavy hearts we announce that Senator Robert Joseph Dole died early this morning in his sleep,"...
CONGRESS & COURTS・1 DAY AGO
Business Insider

10 Things in Politics: GOP has big plans to thwart Biden

Welcome back to 10 Things in Politics. Sign up here to receive this newsletter. Plus, download Insider's app for news on the go — click here for iOS and here for Android. Send tips to bgriffiths@insider.com. Here's what we're talking about:. 1. THE GHOST OF CONGRESS' FUTURE?: Democrats aimed to...
PRESIDENTIAL ELECTION・13 HOURS AGO
WGNO

The House on Thursday voted to pass a short-term spending bill to fund the government through mid-February, as lawmakers work quickly to avert a shutdown on Friday.
CONGRESS & COURTS・7 HOURS AGO

Fauci pushed back on Sen. Ron Johnson's claims that he 'overhyped' the AIDS crisis and COVID-19

Dr. Anthony Fauci on Sunday called comments made by GOP Sen. Ron Johnson "preposterous." During a podcast that aired Wednesday on World AIDS Day, Johnson said Fauci "overhyped" the AIDS epidemic and the COVID-19 pandemic. I don't have any clue what he's talking about," Fauci said during an appearance on...
CONGRESS & COURTS・1 DAY AGO
Axios

Republican and Democratic politicians, including former Senate colleagues, are sharing condolences and memories commemorating the life of Bob Dole, who passed away at 98 on Sunday morning. The big picture: Dole, the Republican presidential nominee in 1996, was the longest-serving Republican leader in the Senate until 2018, when current Senate...
CONGRESS & COURTS・1 DAY AGO
The Guardian

Biden’s Democrats Are a Joke and So Are Trump’s Republicans—Can’t Anybody Here Play This Game?

In 2020, Democrats were given a chance to lead. And while it’s too soon to declare this presidency an abject failure, things are not looking good. Joe Biden continues to be plagued by COVID-19, disappointing jobs reports, and anemic approval ratings. If all goes as expected, the Republican Party will recapture Congress next year. But then what?
PRESIDENTIAL ELECTION・2 DAYS AGO
Denton Record-Chronicle

WASHINGTON — Congress struck a deal Thursday night to keep the government open through February, after overcoming a threat from Sen. Ted Cruz and a few allies to force a shutdown unless funds for a vaccine mandate were cut off. Federal courts have blocked the mandate, which is aimed at...
CONGRESS & COURTS・3 DAYS AGO
indybay.org

Protesters met in front of the house of San Francisco's Member of Congress, Nancy Pelosi, in a People's Assembly held monthly on first Fridays. Pelosi doesn't meet with her constituents, so we go to her house to tell her to declare a climate emergency and cut the Pentagon budget. Pelosi just voted $741 billion of our taxes for the military; that’s $1.4 million a MINUTE. We want peace, diplomacy and cooperation to fight climate chaos, not more wars.
SAN FRANCISCO, CA・2 DAYS AGO
MSNBC

On the surface, Congress was able to avoid a government shutdown with relatively little drama this week. Facing an inflexible deadline, Democratic and Republican leaders gradually worked toward a solution, confident that an ill-timed crisis would be avoided when all was said and done. With this in mind, the Democratic-led...
PRESIDENTIAL ELECTION・3 DAYS AGO