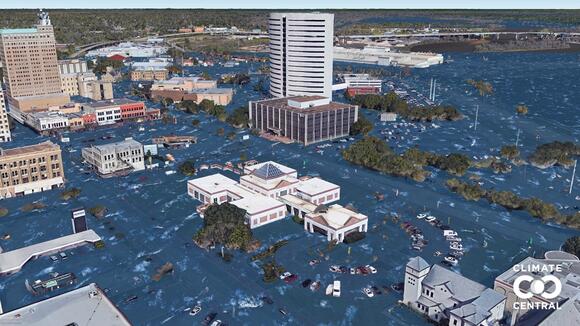 (NEXSTAR) – The most severe impacts of climate change can feel far-off and far away from home, but a series of dramatic photo renderings released by Climate Central make the prospect of rising sea levels hit startlingly close to home.

Climate Central is an organization of scientists and journalists focused on studying the impacts of climate change and warming global temperatures. The group recently released its “Picturing Our Future” project, which shows what world monuments and cities would look like if the planet warmed 1.5 degrees Celsius over pre-industrial levels, and what it would look like if we warmed 3 degrees over those same levels.

In the series of slider images below, the image on the left represents a 1.5-degree warming scenario — which is the target of the Paris Agreement. The image on the right shows what “sea level rise” would look like in a planet that warmed by 3 degrees Celsius. (A 1.5 degree-change in Celsius is equal to 2.7 degrees Fahrenheit; 3 degrees Celsius is 5.4 degree Fahrenheit.)

According to a report from the Intergovernmental Panel on Climate Change (IPCC) released in August, the world is set to surpass the crucial 1.5-degree threshold in the early 2030s. But that doesn’t mean we’ll be seeing these flooding scenarios play out in the next ten years.

“This is using projections that are really deep into the future,” said Peter Girard, Climate Central’s director of communications. Girard called each of the futures depicted “multi-century scenarios.”

That’s because as the earth warms, it takes time for polar ice to melt, sea levels to rise, and oceans to expand (which they do when heated).

We’re already at 1.1 degrees of warming compared to pre-industrial temperatures, but we haven’t even seen the full impact of such heat on the rising sea level yet.

These projections show that full, eventual impact. “Each of the water levels represents the eventual point of equilibrium where the seas stop rising after the earth hits a certain peak temperature,” said Girard.

Scientists are confident about these outcomes. They’re just not sure of the exact timing, Girard explained.

“In general, because it’s easier to figure out volume, science has an easier time understanding how high seas will rise and a harder time figuring out when it will happen.”

It’s a concept that can be hard to grasp in the abstract, but these images make the effects of sea level rise tangible and real.

“The seas have stayed more or less where they always were,” said Girard. “It’s really hard to get people to understand that we live in a world where they’re moving, and they’re rising.”

Not all of the places depicted are coastal (though many are). Climate Central’s series of images show the impact of sea level rise on inland communities, too.

“Rivers rise with oceans,” said Girard. “All of those connections are affected by rising seas. Communities you often think of as further upriver or not on the beach are still connected to this global system.”

The science that went into creating the projections is complicated, but essentially boils down into three parts:

Girard hopes the complex science translates into something meaningful for people when they see these images.

“So much of this story, so much of climate change is told on a global level. One of the things we’ve tried to do with our research is bring it to a personal and local level. Each of these places resonates with people differently because they are familiar with them and they care about them.”

Girard, too, said one aspect of the project left an especially strong impression on him: “The thought that familiar places can become so unfamiliar.”

See how more U.S. cities and world monuments will be affected by sea level rise at Climate Central’s website.

ANTARTICA — A total solar eclipse lasting nearly 2 minutes was observed over Antarctica early Saturday morning. The eclipse, which occurs when the moon passes directly between the sun and Earth, blotted out the daylight for 1 minute and 54 seconds. Totality is the brief period during an eclipse when the sun or moon is totally […]
ASTRONOMY・1 DAY AGO
PIX11

Total solar eclipse 2021: What time and how to watch

For nearly two minutes, a total solar eclipse will turn day into night over Antarctica on Saturday – find out how you can watch.
ASTRONOMY・2 DAYS AGO
PIX11

Comet Leonard to fly by Earth in once-in-a-lifetime event: Here’s how to see it

A comet that was discovered earlier this year is expected to fly by Earth next week on its journey through the solar system, and it will be the only chance you'll ever get to observe the celestial object.
ASTRONOMY・1 DAY AGO
PIX11

Scientists call omicron variant ‘most mutated’ version of virus: Here’s why that matters

Lawrence Young, a virologist at the University of Warwick, described omicron as “the most heavily mutated version of the virus we have seen,” including potentially worrying changes never before seen all in the same virus.
NEW YORK CITY, NY・1 DAY AGO

Toxins in disposable plastic face masks may harm humans and the environment: study

In 2020, production facilities, mainly in China, produced over 52 billion masks – some up to 450 million per day
WORLD・20 HOURS AGO
PIX11

Here's what travelers should know ahead of the changes taking effect Monday.
U.S. POLITICS・11 HOURS AGO
PIX11

Asthma is one of the leading causes of hospitalizations and trips to the emergency room for children.
DISEASES & TREATMENTS・17 HOURS AGO
PIX11

How much does a strand of Christmas lights add to your electric bill?

Not sure which type of Christmas lights to pick? How much each strand will impact your electric bill may help you decide.
ENERGY INDUSTRY・20 HOURS AGO

Does winter feel warmer? In these places, it really is

(NEXSTAR) – The planet has been getting just a little bit hotter every year, but the effects aren’t being felt equally. In the United States, some regions are just 1 or 2 degrees warmer than they were 50 years ago. In other areas, average winter temperatures have jumped 5 degrees Fahrenheit. New data analysis from […]
ENVIRONMENT・1 DAY AGO
PIX11

Why marijuana smells like skunk: Scientists reveal cause behind unmistakable odor of cannabis

As marijuana becomes legal in more and more places, even non-users are having to get used to one particular aspect of the drug — its smell.
PHARMACEUTICALS・20 HOURS AGO
PIX11

NEW YORK — New York announced three more cases of the omicron variant of the coronavirus on Saturday, bringing the number of state cases linked to the new variant to eight. “The omicron variant is here, and as anticipated we are seeing the beginning of community spread,” state Health Commissioner Mary Bassett said in a […]
NEW YORK CITY, NY・1 DAY AGO

HARTFORD, C.T. — Connecticut Gov. Ned Lamont announced the state’s first case of the omnicron variant of COVID-19 Saturday. “We presumed it was already in our state and the information we received from the lab today confirms that fact,” Lamont said. “This likely is not the only case of the variant in the state. That being […]
CONNECTICUT STATE・1 DAY AGO
PIX11

NEW YORK — Some New Yorkers impacted by Hurricane Ida now have until January to apply for assistance from the federal government, FEMA announced Friday. According to a release, New York City residents who live in the Bronx, Brooklyn, Queens and Staten Island have until Jan. 4 to apply for federal disaster assistance. Residents of […]
NEW YORK CITY, NY・1 DAY AGO
PIX11

NEW YORK — The emerging omicron variant of the coronavirus should cause people to take more precautions, a respiratory expert said on Friday, the same day that Mayor Bill de Blasio said that he’d consider raising the minimum number of doses of coronavirus vaccine a person may have to prove that they’ve taken in order […]
NEW YORK CITY, NY・2 DAYS AGO
PIX11

PIX on Politics panel: A look at omicron and NY governor’s race

NEW YORK — The new omicron COVID-19 variant has raised the alarm and prompted local officials to re-evaluate measures to mitigate the spread of the virus. All this comes as many of New York’s top politicians eye the 2022 race for governor. PIX11’s Ayana Harry, New York Post City Hall Bureau Chief Julia Marsh and […]
NEW YORK CITY, NY・21 HOURS AGO
PIX11

Which cities rank highest for infidelity?

"Cuffing season" is here. And while, typically, that's the time when singles start looking to find a partner with whom to pass the colder months, especially ahead of the holidays, married couples appear to be hooking up as well.
RELATIONSHIP ADVICE・20 HOURS AGO
PIX11

The U.S. economy added 210,000 jobs in November, far below economists' expectations, while the unemployment rate plunged 0.4 percentage points, according to data released Friday by the Labor Department.
BUSINESS・2 DAYS AGO