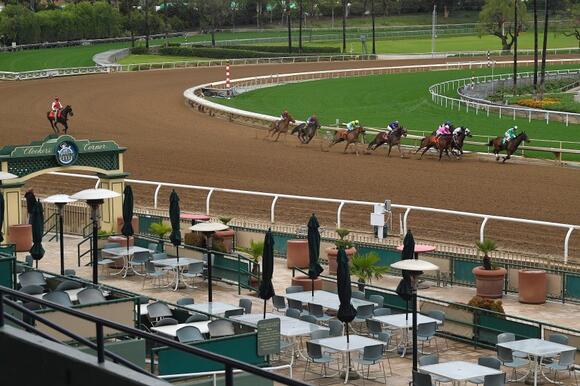 Santa Anita had its fourth equine death of its five-week fall meeting on Saturday when Major Cabbie broke down on the backstretch of a one-mile claiming race and was euthanized. This fall meeting has been a significant backslide from last year when the Arcadia track had no deaths either racing or training.

Major Cabbie, a 6-year-old, was running his first race for trainer Victor Garcia after being claimed from the barn of Peter Miller. He was running at the same claiming level as his previous race, in which he finished fourth. It appeared the horse was clear of other horses when the injury occurred, resulting in jockey Ricardo Gonzalez being unseated. Gonzalez was not hurt and rode later in the card.

It was the first racing or training death from Garcia’s barn since 2015, according to California Horse Racing Board records.

The Stronach Group, owner of Santa Anita and other tracks, has been a leader in trying to upgrade safety standards in the industry after a disastrous 2019 in which 30 horses died racing or training during its half-year winter/spring meet and seven more during its fall meeting. Most notable of those was Mongolian Groom, who suffered a fatal injury while running in the Breeders’ Cup Classic on the penultimate day of the fall meeting. In 2018, there were four deaths in the fall meeting.

California has had a precipitous decline in horse deaths the last two years after both track and CHRB reform measures were instituted. The biggest two days of the year are in two weeks when the Breeders’ Cup is held at Del Mar on Nov. 5-6.

HOT SPRINGS, Arkansas — On a windy November day, our own Ashley King toured the stables of Oaklawn as owners, trainers and vets prepare for opening day on December 3. While there we found the perfect tour guide in 9-year-old Lacey. “They say I’m famous at school all the time because they can look me up on the internet and they’ll pick up pictures of me and my mom and the horses."
HOT SPRINGS, AR・1 DAY AGO
Santa Clarita Radio

As 2021 slowly comes to an end, attention will turn to a new year via which we can all be excited about the next chapter in our lives. For sports betting enthusiasts, the Super Bowl and the NBA Championship games will be at the forefront of their minds – can LA’s Golden State Warriors prevail in the latter? – and for those that love the thrills of horse racing the 2022 calendar is shaping up rather nicely.
SANTA CLARITA, CA・11 DAYS AGO
d1baseball.com

MALIBU, Calif. — Two years ago Andrew Checketts was lamenting his lack of experience returning to his 2020 UC Santa Barbara squad. He had three starters back in the field and just two pitchers of note from his ’19 squad. But in that COVID-shortened season, his team turned out pretty darn good, going 13-2 including a win over No. 1-ranked UCLA and a series sweep at Oregon State. Oh the possibilities had that season been completed.
SANTA BARBARA, CA・12 DAYS AGO