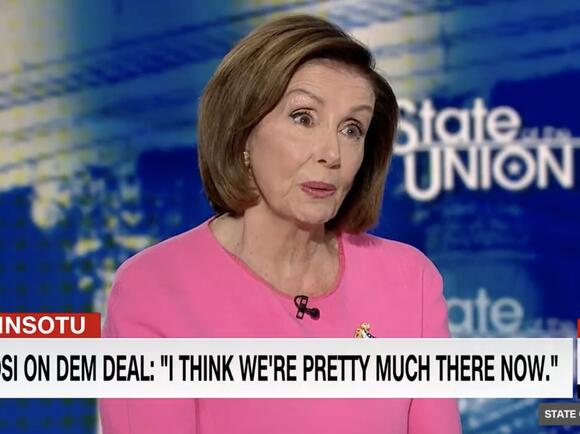 House Speaker Nancy Pelosi, a Democrat from California, on Sunday said she expects an agreement on the bipartisan infrastructure bill soon as lawmakers near an agreement on a social spending plan.

Pelosi, who made the comments during an appearance on CNN's "State of the Union," said Democrats were nearing consensus on how to proceed with the reconciliation bill, the 10-year spending plan that is the cornerstone of President Joe Biden's agenda. The bill, which has been pared back from about $3.5 trillion to $2 trillion to gain the support of two Democratic holdouts, would invest in education, childcare, climate change, and programs for women, the elderly and minorities.

House leadership has held off on voting on an infrastructure bill passed by the Senate in August until an agreement between progressive and centrist Democrats could be made on the reconciliation package.

Meantime, Biden is meeting with one of the holdouts, Sen. Joe Manchin of West Virginia and Senate Majority Leader Chuck Schumer on Sunday to try and hammer out a final agreement on the tax-and-spend bill.

Pelosi said 90% of the reconciliation bill had been written and agreed upon, adding that lawmakers were "pretty much there" on it.

At the beginning of the month, Pelosi pushed the deadline for lawmakers to agree on the infrastructure bill to October 31 , when highway funding runs out, saying it was "about time" the House passed the legislation after progressives stalled its passage, claiming they wouldn't vote in its favor unless it passed alongside the reconciliation bill.

Centrist Democrats, like Manchin and Sen. Kyrsten Sinema of Arizona, have pushed back on key provisions of the reconciliation bill, also leading to the delays.

"This date is fraught with meaning because October 31 is the day the highway trust fund authorization expires," Pelosi said Sunday. "And if that expires, we have to get billions of dollars someplace to continue that. The best way to do that is to pass the bill."

"We just have some of the last decisions to be made," Pelosi said Sunday. "It is less than what was projected to begin with but it is still bigger than anything we have ever done in terms of addressing the needs of America's working families."

"I'm optimistic that we can do that," she said.

We don't need more social spending period! What we need is a balanced budget without all their payback to their friends who have helped them stay in office!!#LetsgoBrandon

Americans don't want another Obamacare, they want 435 members of the House and 100 members of the US Senate to read it. - - - - Then tell their constituents what's in it, before a single vote even cast, otherwise "no deal" on America's future.

Americans wake up! This bill is given over 800 millions of illegals in the YS citizenship! This is not what Americans, their kids, and their grandchildren to be paying for! Something needs to be done!

A group of GOP senators are said to be considering hardball tactics to derail Biden's vaccine mandate. They plan to block a government funding bill to strip the mandate of funding, Politico reported. Congress has until midnight on Friday to pass a new funding bill. A group of Republican lawmakers...
PRESIDENTIAL ELECTION・14 HOURS AGO
Fox News

Eighteen House Democrats are taking a hike come January 2023, and House Speaker Nancy Pelosi’s spot up top may be available for another Democrat if the party holds onto their razor-thin majority. Pelosi, D-Calif., has yet to officially announce her decision for 2022 and beyond. Last year, she implicitly reaffirmed...
CONGRESS & COURTS・1 DAY AGO
Shore News Network

Congresswoman Marjorie Taylor Greene is now claiming that the January 6th breach of the U.S. Capitol and the violence that ensued was a ‘complete setup’ by Nancy Pelosi and the Democrats. Greene claims that Pelosi intentionally did not allow the National Guard to assist U.S. Capitol security forces and that...
CONGRESS & COURTS・10 HOURS AGO
Fox News

House Speaker Nancy Pelosi, D-Calif., and Senate Majority Leader Chuck Schumer, D-N.Y., blasted former President Trump for high gas prices under his administration, but the numbers are worse under President Biden. Pelosi and Schumer both took shots at Trump in 2018 over gas prices across the nation as they neared...
PRESIDENTIAL ELECTION・1 DAY AGO

A staffer for House Speaker Nancy Pelosi was slammed on Twitter for attacking Republicans over mask mandates despite Pelosi being spotted multiple times in public without a mask since the start of the coronavirus pandemic. "Now that Omicron has emerged, I wonder if any Republican Hill staffers regret embracing anti-mask...
CONGRESS & COURTS・8 HOURS AGO
Markets Insider

Democrats want to raise the debt ceiling, avoid a government shutdown, and pass Biden's agenda all before Christmas. The GOP has other plans.
CONGRESS & COURTS・1 DAY AGO
MSNBC

McCarthy tries (and fails) to resolve the GOP's newest feud

As the current Congress got underway earlier this year, House Minority Leader Kevin McCarthy stressed the importance of Republican unity. As far as the California congressman is concerned, having a unified GOP conference is critical to winning back the House majority in the 2022 midterm elections. With this in mind,...
CONGRESS & COURTS・14 HOURS AGO
Fox News

The House of Representatives under the leadership of Speaker Nancy Pelosi, D-Calif., is on track to have the least number of voting days in modern congressional history. The House is scheduled to vote on 100 days next year in the second half of the 117th Congress after only 103 voting days this year, for a total of 203.
CONGRESS & COURTS・9 HOURS AGO

A Republican push on vaccine mandates and a debate over how long a spending patch should last has delayed a House vote to keep the government funded.
WASHINGTON, DC・6 HOURS AGO
FiveThirtyEight

In today’s hyperpartisan political climate, members of Congress risk losing support when they deviate from their party’s position on important votes. In fact, over the past year, we’ve already seen this play out twice for Republicans in the House of Representatives. First, 10 House Republicans infuriated their colleagues and the...
NEW YORK CITY, NY・1 DAY AGO
POLITICO

The chamber's goals of passing the defense bill and confirming nominees are at risk of failure over Nord Stream 2 sanctions.
CONGRESS & COURTS・1 DAY AGO
WashingtonExaminer

(CNN) — On Monday, New York Democratic Rep. Tom Suozzi announced he plans to leave his 3rd District seat behind to run for governor in 2022. Asked about whether control of his seat -- or the House more generally -- mattered much in his decision, Suozzi said it "wasn't a big factor."
CONGRESS & COURTS・2 DAYS AGO
Business Insider

Insider asked Republicans poised to take charge what they'd do if American voters decide to put them back in the majority in Congress.
U.S. POLITICS・1 DAY AGO
Marietta Daily Journal

Democratic leaders in Congress are working around the clock to meet a new end-of-week deadline to avoid a government shutdown amid separate looming deadlines to avoid a disastrous national default, pass a defense bill and enact President Biden’s sprawling budget proposal. The White House is trying to convince Congress and...
CONGRESS & COURTS・1 DAY AGO
HuffingtonPost

Joe Manchin isn’t the only person in the Senate with power over Joe Biden’s legislative agenda. The fate of key provisions included in the Build Back Better bill also rests with the Senate parliamentarian ― the official in charge of advising senators on rules and procedure. This week, lawmakers and...
CONGRESS & COURTS・1 DAY AGO

A growing chorus of conservatives is demanding that Senate Republicans shut down the government if President Joe Biden refuses to scrap the federal coronavirus vaccine mandate.
CONGRESS & COURTS・1 DAY AGO
Newsweek

We the People: Pelosi’s likely retirement leaves lawmakers jostling to replace her as House speaker

Each week, The Spokesman-Review examines one question from the Naturalization Test immigrants must pass to become United States citizens. Today’s question: What is the name of the Speaker of the House of Representatives now?. On Jan. 3, 2007, Rep. Nancy Pelosi made history when a majority of the House of...
CONGRESS & COURTS・3 DAYS AGO