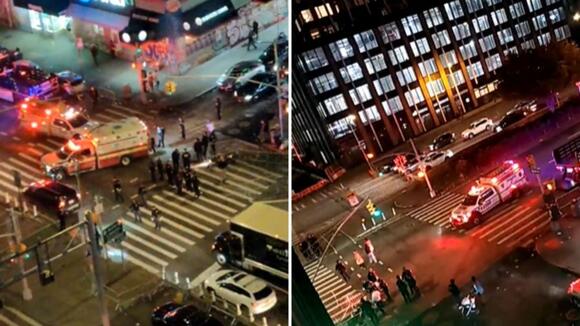 LOWER EAST SIDE, Manhattan — An unlicensed and impaired motorcyclist drove through a police barricade, which struck an officer, on the Lower East Side Saturday night, according to the NYPD.

The incident happened around 10 p.m. on the corner of Delancey and Suffolk streets.

The NYPD was conducting a motorcycle checkpoint at the end of the Williamsburg Bridge when the suspect wouldn’t stop, police said. Instead, he drove through the metal barricade, which ricocheted into the officer, according to authorities.

The officer suffered a cut to the leg and was treated at a hospital, police said.

Police arrested the driver, identified as Manhattan resident Brian Weldon, 36, and charged him with two counts of assault, resisting arrest, reckless endangerment, criminal possession of a weapon, operating a motor vehicle while impaired by drugs, operating an unregistered vehicle, driving while unlicensed, failure to obey officer, refusal to take a breath test, and obstruction of governmental administration.

HELL’S KITCHEN, Manhattan — A man is wanted after punching a 68-year-old man multiple times Nov. 20, police said Tuesday. The victim got into a verbal argument with the suspect at about 5:55 p.m., while the two were both inside a store on West 42 Street. Police said the suspect then turned the argument physical, […]
MANHATTAN, NY・11 HOURS AGO
PIX11

SHEEPSHEAD BAY, Brooklyn — The same burglar has broken into a Brooklyn synagogue several times in recent weeks, stealing thousands in cash, according to the NYPD. Police said it started on Nov. 24 around 10 p.m., when the unidentified individual broke a rear window at Congregation Israel of Kings Bay to gain access to the […]
BROOKLYN, NY・20 HOURS AGO
PIX11

MIDTOWN EAST, Manhattan — A man is accused of grabbing a woman from behind, groping her and then stealing her phone on a Manhattan street Saturday evening, according to the NYPD. Police said the woman, 28, was walking in Midtown East, near the corner of East 40th Street and First Avenue, when the unidentified man […]
MANHATTAN, NY・2 HOURS AGO
PIX11

NEW YORK — Intense body camera video shared by the NYPD Tuesday shows “how quickly your cops shift gears from crime fighters to life savers,” according to Commissioner Dermot Shea. The video, posted by both Shea and the NYPD, shows an officer trying to extinguish a vehicle fire before — “without any regard for his […]
BRONX, NY・15 HOURS AGO

2 kilos of fentanyl found inside SUV in Queens, DA says

QUEENS, N.Y. — Police arrested two men in Queens last week after they found 2 kilos — over 4 pounds — of the deadly drug fentanyl hidden in their SUV, District Attorney Melinda Katz announced on Tuesday. Luis Navarro Gonzalez and Juan Esquer were charged with criminal possession of a controlled substance in the first, […]
QUEENS, NY・18 HOURS AGO
PIX11

HARLEM, Manhattan — The NYPD on Tuesday identified the suspected gunman after a 17-year-old boy was fatally shot in Harlem in late October. Police responding to a 911 call found Taquan Jones with a gunshot wound to the chest on West 132nd Street on the afternoon of Oct. 26. He was rushed to Harlem Hospital […]
MANHATTAN, NY・1 DAY AGO
PIX11

NEW YORK — The NYPD deployed specialists citywide for body camera inspections after an officer’s device ignited, police said Tuesday. The officer noticed smoke coming out of their Axon AB2 body camera and pulled it off, officials said. Once it was off, the device ignited. An investigation found there was a possible issue with the […]
NEW YORK CITY, NY・14 HOURS AGO
PIX11

Man suspected of killing family, then self, over fake vaccine record: investigators

The bodies of two 40-year-olds and their children aged 10, 8 and 4 were found with gunshot wounds at their home.
BERLIN, NY・17 HOURS AGO

MIDTOWN MANHATTAN — A man was arrested overnight after allegedly setting a Christmas tree on fire outside the News Corp. building in Midtown Manhattan, according to the NYPD. Police said just after midnight Wednesday, Fox News security in the building saw a man climbing the Christmas tree outside the office building located at West 48th […]
MANHATTAN, NY・3 HOURS AGO
PIX11

JAMAICA, QUEENS — A man was killed and a second man injured in a Queens shooting on Monday. Police responded to 111th Avenue and 176th Street and found a 40-year-old man with gunshot wounds to his head and chest, officials said. He was pronounced dead at the hospital. A second man, 25, was shot in […]
QUEENS, NY・1 DAY AGO
PIX11

MIDTOWN, Manhattan — Police arrested two men on Monday in connection with two separate fatal stabbings at Penn Station late last month. Brooklyn resident Jamoy Phillip, 26, was charged with murder in the death of Akeem Loney, according to the NYPD.  Loney, 32, was stabbed in the neck while riding a northbound No. 2 train […]
BROOKLYN, NY・1 DAY AGO

MANHATTAN, N.Y. — A week after three female suspects slapped and grabbed Jewish children, a heightened police presence was still felt in Bedford-Stuyvesant. Two of the hate crimes, which took place in the heart of a Jewish community, happened on the first night of Hanukkah. But those incidents are just the tip of the iceberg, […]
BROOKLYN, NY・9 HOURS AGO
PIX11

Fatal gunshot to the head: Man, 62, dead in the Bronx

THE BRONX — A 62-year-old Bronx man was fatally shot in the borough on Sunday, police said. Robert Brown was found with a gunshot wound to the head near West Fordham Road and Aqueduct Avenue around 3 p.m., officials said. He was taken to a hospital where he was pronounced deceased. No arrests have been […]
BRONX, NY・2 DAYS AGO
PIX11

ALBANY, N.Y. (AP) — New York’s attorney general’s office has determined an officer was justified in fatally shooting an Oneonta man who was threatening his toddler son with a knife. Tyler Green died after the confrontation on April 6. The attorney general’s office report released late Friday concluded that Green threatened and then stabbed his […]
ONEONTA, NY・2 DAYS AGO
PIX11

Man with ‘wooden daggers’ threatens woman on subway in Manhattan

MIDTOWN EAST, Manhattan — A man threatened to kill a woman on a train on Monday while brandishing what police described as wooden daggers. The 46-year-old victim was on a southbound No. 4 train on Monday morning when a man made the death threat along with derogatory statements, police said. Images provided by the NYPD […]
MANHATTAN, NY・2 DAYS AGO
PIX11

NEWARK, N.J. — A three-alarm house fire that spread to surrounding buildings in Newark early Tuesday forced over two dozen area residents out of their homes and into the cold, according to officials. Newark firefighters responded just before 3:45 a.m. to a call for a fire at a residential building on Fairmount Avenue, between South […]
NEWARK, NJ・1 DAY AGO
PIX11

BAYPORT, N.Y. — A Long Island man allegedly sent hate-filled, threatening letters to people, businesses and organizations connected to the LGBTQ+ community, including a threat to shoot up the 2021 New York City Pride March with “firepower” that would “make the 2016 Orlando Pulse Nightclub shooting look like a cakewalk,” according to a criminal complaint […]
NEW YORK CITY, NY・1 DAY AGO
PIX11