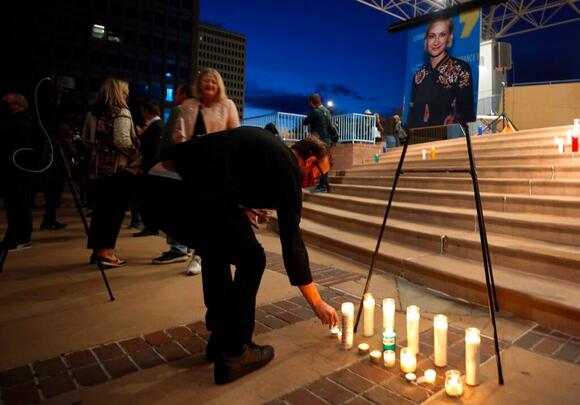 ( KTLA ) – Family and friends gathered in Hollywood Saturday to pay their respects to cinematographer Halyna Hutchins, 42, who was killed Thursday following a shooting incident on the set of the Alec Baldwin film “Rust” in New Mexico.

A chapter of the International Cinematographers Guild is raising funds in memory of Hutchins, who is one of the guild’s members. The ICG Local 600, based in Hollywood, launched a GoFundMe page for Hutchins on Friday afternoon.

“Local 600 mourns the passing of Halyna Hutchins, a Director of Photography who died from injuries sustained on the set of ‘Rust’ in New Mexico, on Thursday, October 21,” a statement on the page said.

“Halyna is survived by her husband, Matthew, and her 9-year-old son,” it continued. “In memory of Halyna, Local 600 has set up this GoFundMe page to help raise funds for her family at this difficult time. We encourage you to donate if you can.”

As of Saturday morning, the campaign has raised over $81,600.

After ‘Rust’ shooting, a look back at other fatal on-set accidents

On Thursday, authorities responded to an incident at the Bonanza Creek Ranch set of “Rust” around 1:50 p.m. local time.

Upon further investigation, the sheriff’s department learned that Hutchins and director Joel Souza, 48, were “ shot when a prop firearm was discharged ” by Baldwin, 63.

An assistant director had unwittingly handed Baldwin a loaded weapon and told him it was safe to use in the moments before the actor fatally shot the director of photography, according to court records released Friday.

According to a search warrant filed in a Santa Fe court, the assistant director announced the weapon was a “cold gun.” However, the gun had been loaded with live rounds , according to court records. When Baldwin pulled the trigger on the set, he struck cinematographer Hutchins, as well as Souza.

Hutchins was airlifted to the University of New Mexico Hospital, where she died from her injuries, according to the sheriff’s department. Souza was also taken to a hospital for treatment.

Baldwin described the killing as a “tragic accident” in a statement released Friday.

“There are no words to convey my shock and sadness regarding the tragic accident that took the life of Halyna Hutchins, a wife, mother and deeply admired colleague of ours. I’m fully cooperating with the police investigation,” Baldwin wrote on Twitter. “My heart is broken for her husband, their son, and all who knew and loved Halyna.”

So far, no charges have been filed. The investigation into the incident remains ongoing.

Just days before the incident, Baldwin expressed his support for a potential IATSE strike to improve working conditions for crew members. In a video shared on his Instagram on Tuesday, Baldwin said, “I want to say to the people in IATSE, do what you need to do.”

MORNINGSIDE HEIGHTS, Manhattan — A man accused of going on a deadly stabbing spree in Manhattan on Thursday was charged by police late Friday night.  Vincent Pinkney, of Manhattan, faces charges of murder, attempted murder, assault, attempted assailt and three counts of criminal possession of a weapon, according to the NYPD. The 25-year-old purported gang […]
MANHATTAN, NY・2 DAYS AGO
PIX11

JAMAICA, QUEENS — Police are searching for a suspect after he tackled a woman Wednesday, put his hand under her skirt and attempted to rape her, police said Friday. The woman was walking up the street stairwell at the 169th Street station at about 6:10 a.m. when the man came up behind her and tackled […]
QUEENS, NY・2 DAYS AGO
PIX11

SHEEPSHEAD BAY, Brooklyn — A man tried to rape a woman inside the lobby of an apartment building in Brooklyn, police said Saturday. The 45-year-old victim told police the suspect approached her inside the building lobby, located near Shore Parkway and 13th Street in Sheepshead Bay, around 1:50 a.m. on Friday. The man grabbed her […]
BROOKLYN, NY・2 DAYS AGO
Whiskey Riff

As the investigation of Alec Baldwin’s accidental shooting and murder on the set of Rust continues, more and more celebrities continue to speak out. The latest one, being George Clooney. According to the New York Post, the famed actor told Marc Maron’s “WTF” podcast that the accidental shooting and killing...
CELEBRITIES・20 DAYS AGO

Although Alec Baldwin has claimed that he was not responsible for the tragic shooting death of Halyna Hutchins on the set of the film Rust — the Santa Fe County District Attorney believes that he is not in the clear. Article continues below advertisement. The actor, 63, sat down for...
SANTA FE COUNTY, NM・2 DAYS AGO
New York Post

George Clooney has ripped Alec Baldwin’s deadly shooting of the “Rust” cinematographer as “infuriating” and “insane” — insisting the star and his crew appeared to ignore decades-old safety rules used on every other set. The veteran Hollywood star told Marc Maron’s “WTF” podcast that the death of 42-year-old cinematographer Halyna...
CELEBRITIES・20 DAYS AGO
buzzfeednews.com

A new lawsuit filed by a Rust crew member on Wednesday alleges that Alec Baldwin discharged the gun that accidentally killed cinematographer Halyna Hutchins last month despite the fact that the script for the scene to be filmed that day did not call for a gun to be fired. Mamie...
CELEBRITIES・19 DAYS AGO
kb101fm.com

Another lawsuit has been filed against Alec Baldwin and the other producers of the Western Rust, following a shooting incident on October 21 that left cinematographer Halyna Hutchins dead and director Joel Souza injured. According to documents obtained by ABC News, the movie’s script supervisor, Mamie Mitchell, is claiming “assault,...
CELEBRITIES・19 DAYS AGO

Six weeks later, Alec Baldwin claims he still has no idea how he ended up shooting and killing cinematographer Halyna Hutchins on the set of his ill-fated western Rust. The actor spoke out for the first time this week—outside of a heated run-in with paparazzi in Vermont—in an exclusive primetime special with ABC News’ George Stephanopoulos that aired Thursday night. And in the tearful interview, he denied actually pulling the trigger in the deadly shooting and at the same time described the incident as the “worst thing” that has ever happened to him. He said he is taking solace in the fact that he believes he was not “responsible” for Hutchins’ death and that he might have killed himself had he really felt her death was his fault.
CELEBRITIES・3 DAYS AGO
New York Post

Alec Baldwin’s brother Daniel reckons his star sibling bears “no responsibility” for shooting dead his cinematographer — and is being made a scapegoat because of his “staunch” political views. “It’s really, really apparent that Alec has no blame in this at all,” Daniel Baldwin, 61, insisted Monday in an interview...
CELEBRITIES・20 DAYS AGO
The Hollywood Reporter

Alec Baldwin Describes What Happened on ‘Rust’ Set: “I Let Go of the Hammer and Bang, the Gun Goes Off”

In his first sit-down interview since the shooting death of cinematographer Halyna Hutchins on the New Mexico set of his film Rust, an emotional Alec Baldwin gave a detailed timeline of exactly what happened that day, and broke down in tears while remembering Hutchins. Baldwin told the interviewer, Good Morning America’s George Stephanopoulos, that he did not want to wait for the lawsuits or investigations to conclude before telling his side of the story. “I think that there is a criminal investigation, that could be a while. There is all kinds of civil litigation, and I felt that there were a...
MOVIES・3 DAYS AGO
New York Post

Just when you think Alec Baldwin can’t go any lower, he blames Halyna Hutchins, the woman he shot to death, for getting shot to death. “Everything is at her direction,” Baldwin told a sycophantic George Stephanopoulos during a jaw-dropping, hourlong interview that aired Thursday night. “I’m holding the gun where...
CELEBRITIES・3 DAYS AGO

Alec Baldwin Lawyers Up To Fight Over 'Rust' Shooting, Actor Takes Sides With Production After Firing 'Live' Round That Killed Cinematographer Halyna Hutchins

Alec Baldwin is ready to fight. The 63-year-old actor has hired a fancy attorney to defend him, months after accidentally firing a live round on his Rust movie set and killing a crew member. Article continues below advertisement. Baldwin is reportedly seeking legal assistance from Aaron S. Dyer of Pillsbury...
CELEBRITIES・9 DAYS AGO
Popculture

Alec Baldwin gave a controversial interview on Wednesday, Dec. 1, about the accidental shooting that killed cinematographer Halyna Hutchins and wounded director Joel Souza during the production of the film Rust in October. The Interview aired on ABC, and Baldwin told ABC News' George Stephanopoulos that he had "no idea" how a live bullet got into the firearm.
CELEBRITIES・2 DAYS AGO
US Magazine

Many film and TV sets are taking action and vowing not to risk having “hot” or “live” — meaning loaded — weapons on set. ABC’s police drama The Rookie has officially banned live rounds. “As of today, it is now policy on The Rookie that all gunfire on set will be with Air Soft guns with CG muzzle flashes added in post,” showrunner Alexi Hawley wrote in a memo obtained by The Hollywood Reporter on Friday, October 22. “There will be no more ‘live’ weapons on the show. The safety of our cast and crew is too important.”
TV SERIES・5 DAYS AGO
Newsweek

"There are no words to convey my shock and sadness regarding the tragic accident that took the life of Halyna Hutchins," Baldwin said after the incident.
CELEBRITIES・5 DAYS AGO

(ST. JOSEPH, Mo.) -- With prayers and songs, family and friends of those lost to violent crime gathered at the Buchanan County courthouse Tuesday evening. They were there for the annual Crime Victims Memorial Tree Lighting ceremony. "The pain don't go away," said Kaylee Mitchell, who lost her best friend...
BUCHANAN COUNTY, MO・12 DAYS AGO
Page Six

The widower of late cinematographer Halyna Hutchins will make his first public appearance this week at WrapWomen’s fourth annual Power Women Summit. Matt Hutchins will appear on stage at the event Wednesday, which is taking place at the London West Hollywood in Beverly Hills, to acknowledge the tribute video dedicated to her work, Page Six is exclusively told.
MOVIES・7 DAYS AGO
stockxpo.com

Alec Baldwin says he did not pull the trigger before the bullet struck, killed ‘Rust’ cinematographer

Alec Baldwin on Oct 7, 2021 at the Hamptons International Film Festival. Mark Sagliocco | Getty Images Entertainment | Getty Images. Actor Alec Baldwin said he did not pull the trigger on the gun he was holding before a live bullet struck and killed a cinematographer and injured a director on the set of “Rust,” according to an excerpt from an “ABC News” interview released on Wednesday.
MOVIES・5 DAYS AGO
fox40jackson.com

'Rust' cinematographer Halyna Hutchins honored at star-studded event: 'She is our sister'

“Rust” cinematographer Halyna Hutchins was honored on Thursday at an event celebrating some of Hollywood’s most famous women. The American Film Institute’s (AFI) Dean and Executive Vice President Susan Ruskin paid tribute to the filmmaker at the WrapWomen’s Power Women Summit Live Event, which honors women in Hollywood and the entertainment industry.
MOVIES・4 DAYS AGO