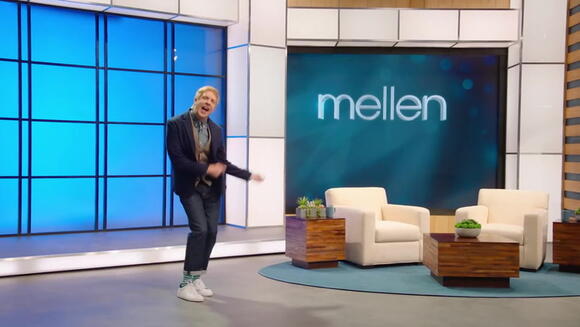 The Ted Lasso star, and former SNL cast member, hosted an episode of the American sketch show for the first time on Saturday (23 October).

Among the highlights were his opening monologue , in which he joked that Ted Lasso ’s success was “truly shocking”, as well as cameo appearances from Oscar Isaac, Emily Ratajkowski and Nicholas Braun., who plays Greg in HBO show Succession .

But, it was his skewering of DeGeneres, whose talk show is set to come to an end following (but not due to) multiple accusations of “mean” behaviour behind-the-scenes.

In the skit, he presented Mellen , which gave DeGeneres’ show a “hard masculine edge” thanks to Sudeikis’ host, fit with Degeneres-style wig. In the skit, he described himself as “a man’s man”.

Where Degeneres invites kids on to inspire the world, Mellen (”the male Ellen”) encourages kids to “slap” their teachers.

He also introduced a set of controversial public figures: the character of podcaster Joe Rogan showed up for a cooking segment, in which he cooked wild boar, while the character of boxer Conor McGregor ended up threatening the audience with a golf club. 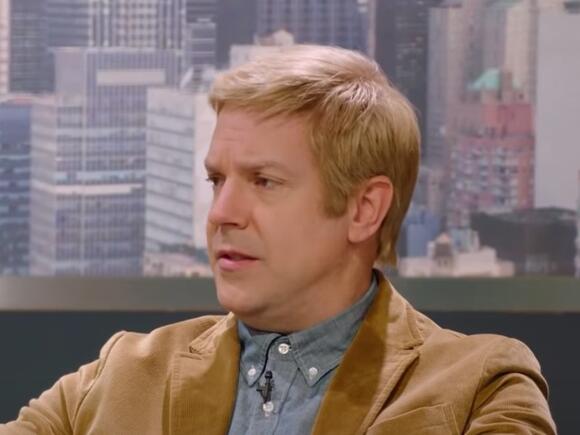 Then there was Pete Davidson’s performance as social media star and boxer Jake Paul, who tried to set up a match with Muhammad Ali – the catch being that if he won, Ali would have to change his name back to Cassisus Clay.

In July, Rogan criticised SNL for “stealing” jokes, calling the show “a den of thieves”.

I agree with the Alec Baldwin gun bit!! Not too soon....at all! These anti-gun celebrities who make millions playing with guns, have finally shown the world who they are......a bunch of over grown children playing make believe, badly.

Yes it seems she is no longer the beloved darling of the left. Of course they focus much more on lifestyle choices than they do on true character. 🥴

I guess we're past the point of the bar is set low. Now in the "there is no bar" phase for SNL. Hasn't been funny in years.

Emily Ratajkowski has explained why Pete Davidson is seen as attractive to so many women and she has given him a pretty good review. Speaking on Late Night With Seth Meyers to promote her new memoir, the model waxed lyrical about the comedian’s charms and questioned why some people don’t understand how he is such a successful dater.
CELEBRITIES・19 DAYS AGO
newschain

What will she say this time? Meghan Markle returns to the chat show sofa, this time with Ellen DeGeneres

The Duchess of Sussex has given a new TV interview – this time to talk show host Ellen DeGeneres. DeGeneres released a trailer on her Twitter account, and said Meghan would be appearing on The Ellen Show on Thursday. The high-profile interview comes eight months after the former Suits star’s...
CELEBRITIES・11 DAYS AGO
Daily Beast

Who was the royal racist? Why had Meghan Markle forgotten to tell a U.K. court that she said it was fine for her then-press chief to brief her sympathetic biographers? What is the current state of the relationships between royal family members?. At the end of today’s much-hyped edition of...
CELEBRITIES・10 DAYS AGO
The Associated Press

Duchess of Sussex gets goofy on Ellen DeGeneres’ talk show

NEW YORK (AP) — It was the Meghan hour Thursday on the talk show of her friend, Ellen DeGeneres, as the Duchess of Sussex helped welcome a special guest, hit the studio lot to prank vendors and said she’ll be cooking Thanksgiving dinner herself. “I love to cook. We’ll be...
CELEBRITIES・10 DAYS AGO

Ellen DeGeneres is, allegedly, eyeing her next business venture after her long-running talk show, Ellen Show goes off the air next year. According to National Enquirer, Ellen DeGeneres and her wife, Portia de Rossi are planning to open a vegan restaurant.
CELEBRITIES・7 DAYS AGO
The Guardian

Meghan Markle has given a new TV interview – this time to talk show host Ellen DeGeneres. The show’s Ellentube.com website said: “The activist and co-founder of Archewell will chat with Ellen about growing up and returning to California, as well as her New York Times bestselling children’s book The Bench.”
CELEBRITIES・11 DAYS AGO
AOL Corp

Caitlyn Jenner has opened up about her years-long feud with Ellen DeGeneres. According to the former Keeping Up With the Kardashians star, DeGeneres has "never" tried to contact her since that infamous 2015 talk show appearance. On Big Brother VIP, Caitlyn recalled how she went on The Ellen DeGeneres Show...
CELEBRITIES・5 DAYS AGO
Popculture

G4TV has relaunched, with Attack of the Show! making a comeback as a part of the network's return. AOTS hosting mainstay Kevin Pereira is leading the reboot, but one personality that hasn't come back is his longtime co-host, Olivia Munn. The live comedy/news program was where Munn got her first break before receiving mainstream Hollywood attention through The Daily Show, The Newsroom and X-Men: Apocalypse, among other projects. The actress, who is currently expecting her first child with boyfriend John Mulaney, previously participated in G4's 2020 reunion special, but she is not involved with the full relaunch.
TV & VIDEOS・19 HOURS AGO

Meghan, Duchess of Sussex, just proved big time on The Ellen DeGeneres Show that she's no longer tethered to royal protocol. From doing random squats out in public to addressing herself as 'Mommy,' Meghan gave street vendors the prank of their lives when she took on Ellen DeGeneres's classic IFB stunt—and the result was a masterpiece.
CELEBRITIES・7 DAYS AGO
mediaite.com

Meghan Markle sat down with Ellen DeGeneres for her first talk show appearance since leaving the royal family. Markle’s upcoming appearance was announced during a sneak peek shared Wednesday, which shows the Duchess of Sussex reminiscing about her time as an actress before meeting Prince Harry. She told DeGeneres that...
CELEBRITIES・11 DAYS AGO
enstarz.com

Tamron Hall just became the new version of Ellen DeGeneres as she reportedly terrorized her show's staff recently. Although DeGeneres' damaging scandal finally lost its spotlight, Tamron reclaimed it by reportedly abusing the staff of "The Tamron Hall Show." According to National Enquirer, Hall made a toxic workplace environment for...
CELEBRITIES・14 DAYS AGO
Telegraph

The Duchess of Sussex is to appear on the The Ellen DeGeneres Show, a programme which has been axed amid allegations of a toxic workplace culture. It will be the Duchess’s first appearance on a US network television talk show since becoming a member of the Royal Family. Both the...
CELEBRITIES・11 DAYS AGO

Nature is healing and Meghan Markle is returning to the daytime talk show circuit. The Duchess of Sussex made her triumphant debut on The Ellen Degeneres Show, which airs Thursday, marking the former actress's first daytime talk show appearance since she married into the royal family in 2018. Markle appeared...
CELEBRITIES・11 DAYS AGO
enstarz.com

On "The Ellen DeGeneres Show," Meghan Markle recently displayed her comedic side. The Duchess of Sussex had viewers in stitches as she participated in a prank set up by Ellen. While out in public, she wore an earpiece and played out whatever the 63-year-old talk show presenter directed her to do.
CELEBRITIES・10 DAYS AGO
Telegraph

The Duchess of Sussex wears £1,336 statement blouse for her Ellen DeGeneres show appearance

The last time the Duchess of Sussex appeared on a major American talk show, it was confirmed that a lot of thought had gone into her decision to wear a particular Armani dress. The lotus flower design on the outfit which Meghan wore in her revealing interview with Oprah Winfrey...
CELEBRITIES・11 DAYS AGO
Entertainment Times

Meghan Markle shared a brief glimpse of her and Prince Harry's eldest child, Archie, during a surprise appearance on "The Ellen DeGeneres Show" on Thursday. The Duchess of Sussex shared a photo of the two-year-old standing inside his chicken coop, Archie's Chick Inn, at the family's Montecito mansion in Santa Barbara, California. He is wearing denim jeans and a grey shirt and a pair of Peppa Pig yellow boots to match the yellow basket in his hand.
SANTA BARBARA, CA・9 DAYS AGO
Insider

Meghan Markle's estranged father, Thomas Markle, says her interview on 'The Ellen DeGeneres Show' was embarrassing for the royal family

Thomas Markle criticized the Duchess of Sussex's appearance on the daytime talk show, where she took part in recorded pranks using an earpiece.
CELEBRITIES・5 DAYS AGO
DesignerzCentral

Whoopi Goldberg told a guest co-host on Tuesday's edition of "The View" that it's the responsibility of "white people" to "step up" and make skin color a non-issue in America. Read Also: Whoopi Goldberg’s HILARIOUS response to why she doesn’t date younger guys will crack you up.
CELEBRITIES・26 DAYS AGO
International Business Times

Heath Freeman Dead: ‘Bones’ Actor Passes Away In His Sleep

Heath Freeman, who graced the small screen as a calculating killer on Fox’s “Bones,” passed away on Sunday. He was 41. Freeman’s demise was first announced by his pals in the industry, with Shanna Moakler being among the first to pay tribute to him on social media. The model turned...
CELEBRITIES・13 DAYS AGO
Popculture

Indian actor Yusuf Hussain has passed away at the age of 73 after contracting COVID-19. The Tribune India reports that Hussain, best known for his roles in Dhoom 2, Raees, and Road to Sangam passed away on Saturday at Lilavati Hospital in Mumbai. His son-in-law, filmmaker Hansal Mehta, who is...
PUBLIC HEALTH・25 DAYS AGO