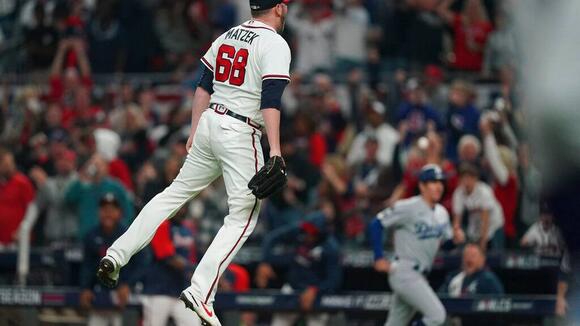 ATLANTA — It’s time to party like it’s 1999! The Atlanta Braves are heading to the World Series for the first time in 22 years.

The Braves knocked out the Los Angeles Dodgers in the National League Championship. Atlanta will now face the Houston Astros.

That means Atlanta will start the series on the road.

A-List Members and Braves Insiders will have the early access with a presale that begins on Monday, Oct. 25, the team said in a press release.

This is the Braves’ sixth World Series appearance since their move to Atlanta in 1966. All five previous trips happened during the team’s 90s run:

Here’s to being thankful, Braves fans

If you’d like some musical accompaniment to your reading of this article, scroll to the bottom of the article for a lovely song that came out earlier this year. The Atlanta Braves are forever the 2021 World Series champions, and that alone is a great thing to be thankful for this year. But there’s a lot of other things to show appreciation for, so join me for a few minutes while I share with you some things I’m thankful for this year.
MLB・13 DAYS AGO
FanSided

3 moves for the Atlanta Braves to make this offseason

This year, the Atlanta Braves enter the offseason as World Series champions for the first time since the 1995 season ended. Now how can the Braves get back to the Fall Classic in 2022? That’s always the question as soon as the confetti stops falling, right?. So what will it...
MLB・14 DAYS AGO
FanSided

In a free agency class loaded with marquee shortstops, former Houston Astros standout Carlos Correa leads the pack in terms of stardom. Many teams this winter are going to be looking for a starting shortstop, but which one is the best fit for Correa, the former overall number one pick and World Series champion?
MLB・13 DAYS AGO
ABC13 Houston

The Houston Astros have agreed to a two-year, $17 million deal with right-handed reliever Hector Neris, a source confirmed to ESPN. Neris, 32, started the 2021 season as the closer for the Phillies but lost the job in June. He finished the season with a 4-7 record with 12 saves and a 3.63 ERA in 74 games.
MLB・10 DAYS AGO

The Houston Astros had a pair of major needs in the back of their bullpen. Once Kendall Graveman signed a three year contract with the White Sox, the Astros needed to find someone that could not only serve in the late innings but potentially step into the closer role should Ryan Pressly falter.
MLB・10 DAYS AGO
Talking Chop

Remember that line from Avengers: Endgame where Thanos referenced facing off against the Avengers once again:. “You could not live with your own failure. Where did that bring you? Back to me.”. That is how I view the reunion between Adam Duvall and the Braves, when Atlanta reacquired Duvall for...
MLB・10 DAYS AGO
KHON2

The Atlanta Braves bolstered their World Series-winning bullpen Monday by signing right-hander Kirby Yates to a two-year, $8.25 million deal. Yates led the majors with 41 saves for the San Diego Padres in 2019. He didn’t pitch this past season for the Toronto Blue Jays because of undergoing his second Tommy John surgery of his […]
MLB・8 DAYS AGO
auburn.edu

On Nov. 2, 2021, the Atlanta Braves defeated the Houston Astros and won the World Series for the first time since 1995. Mary Elizabeth Cox, Auburn College of Human Sciences alumna and Atlanta Braves project manager for guest operations and strategy, made sure the World Series guest experience was unforgettable from first pitch to post-event celebrations.
AUBURN, AL・9 DAYS AGO

The Los Angeles Dodgers could be gunning for a significant free-agent move this offseason. According to MLB Network insider Jon Heyman, multiple teams, including the Dodgers, are looking to “pry” superstar first baseman Freddie Freeman away from his World Series-winning Atlanta Braves squad. Yesterday, the Dodgers lost shortstop Corey Seager...
MLB・7 DAYS AGO
expressnews.com

It's been 57 years since the Houston Astros were the Colt .45s

Although the Houston Astros didn't win the World Series, they still have something to celebrate. The Astros name was born 57 years ago on Dec. 1, 1964 after the team's identity changed from the Houston Colt .45s. The name is the brainchild of the late Harris County Judge Roy Hofheinz,...
MLB・5 DAYS AGO
ABC13 Houston

Baseball loving Houstonians know the story, but in case you don't, here is what led to a name change on Dec. 1, 1964.
MLB・7 DAYS AGO
allongeorgia.com

For a team that came within two games of winning the World Series, and made it to the American League Championship Series for a fifth consecutive postseason, the post-postseason awards circuit has been eerily quiet for the Houston Astros. As opposed to years past, when we've seen MVP awards and Cy Young Awards handed out to certain Astros, aside from Carlos Correa's Gold Glove, there's really been nothing much for the Astros.
MLB・13 DAYS AGO
FanSided

The Atlanta Braves Add Kirby Yates to Strengthen the Bullpen

You had to figure that the rest of the NL East would not simply turn over and cede the division to the Atlanta Braves again. After 4 straight division titles plus a World Series win, it should be a straightforward process for the Atlanta Braves to reload and set themselves up for another run.
ATLANTA, GA・10 DAYS AGO
FanSided

3 moves for the Houston Astros this offseason

The Houston Astros and Dusty Baker found themselves just short once again. They won the American League pennant but were unable to capture the championship, falling to the Atlanta Braves in six games. With that final loss, the Astros found themselves with a bit of uncertainty entering the offseason. They...
MLB・12 DAYS AGO
FanSided

Atlanta Braves infielder Sean Kazmar Jr. was in Triple-A for 12 years before making his Braves debut. After a brief MLB debut in 2008, Sean Kazmar Jr. spent over a decade at the highest level of the minor leagues before getting the call back to the big leagues. The 37-year-old...
MLB・13 DAYS AGO
sportstalkatl.com

Braves: Marcell Ozuna cleared to play immediately, but what’s next?

In somewhat shocking news, Marcell Ozuna‘s punishment has been made public by Major League Baseball after their investigation of his domestic violence dispute. He only received a retroactive 20-game suspension, which he has already served while he was on administrative leave, meaning Ozuna is cleared to play immediately. I don’t...
MLB・8 DAYS AGO
FanSided

Matt Olson is going to be one of the more intriguing players available on the trade block. He has already generated interest from several teams, with the Yankees being amongst the most notable. However, there is now a new player in his market. The Atlanta Braves are expected to bring...
MLB・6 DAYS AGO
FanSided

The Pitch that Each Houston Astros Hitter Crushes

Let’s take a look at which pitches Astros’ hitters crush the most. Back in the summer I did a series on each Houston Astros‘ pitcher’s best pitch – the one that gets outs and, in short, his best pitch. In this article, I’m going to share the best pitch for each batter throughout the lineup as we know it as of early December.
MLB・5 DAYS AGO