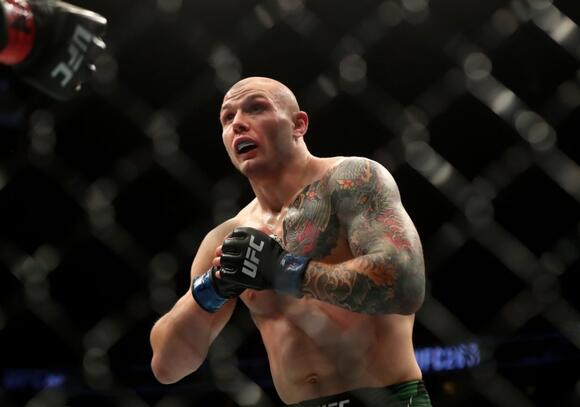 Vettori won 48-46 on all three cards of the five-round main event. Costa was deducted a point in the second round for an accidental eye poke.

The bout was supposed to be fought at middleweight but Costa came in overweight, prompting the bump to 205.

Vettori (18-5-1) absorbed some big shots from Costa (13-2) early on but was able to outlast Costa, handing the Brazilian his second consecutive loss.

“I know I have the biggest heart and biggest will,” Vettori said. “When it goes to fourth and fifth rounds, there is no way nobody can keep up. A lot of people said he wouldn’t be ready, but I feel a lot of it was a trick. He actually came pretty ready.”

In the preceding bout, Ricky Glenn and Grant Dawson fought to a draw. Dawson took one card 29-28 while the other two came in at 28-28 in the three-rounder.

Derek from MPMD claims that UFC star Jon Jones had urinary testosterone levels similar to “a female” during his fight with Daniel Cormier. Jones (26-1 MMA) and Cormier (22-3 MMA) of course have one of the most storied rivalries in mixed martial arts history. The pair initially collided at UFC 182 in 2015, with ‘Bones’ emerging victorious and ‘DC’ leaving distraught.
UFC・2 HOURS AGO
MMA Fighting

Sean Strickland not keen on Darren Till fight, prefers Paulo Costa if he ‘can put down the wine and cookies’

Sean Strickland has a couple of options in mind for his next opponent, but Darren Till doesn’t seem to be one of them. Recently, Till appeared on Michael Bisping’s Believe You Me podcast and expressed interest in a matchup with Strickland — potentially in a possible return to London for the UFC being rumored for March.
UFC・14 DAYS AGO
Bloody Elbow

Aldo blasts Paulo Costa: Why ask for a raise if you can’t even fulfill your contract?

Back in June, former title challenger Paulo Costa refused to take a supposed headliner fight against Jared Cannonier. “Borrachinha” was particularly upset about how he’s monetarily compensated and demanded to be paid as a “main event fighter.”. The 30-year-old Brazilian caused another stir last month when he failed to make...
COMBAT SPORTS・13 DAYS AGO

There’s usually a pretty solid amount of unity between Brazilian Ultimate Fighting Championship (UFC) fighters, but Jose Aldo couldn’t help but express his disappointment in Paulo Costa after “The Eraser” showed up for his last fight a whole weight class up from the contract he signed. Costa was set to...
UFC・14 DAYS AGO
USA Today

'16 months ago I was birthing my second child': Miesha Tate happy with striking evolvement in UFC Fight Night 198 loss

Despite losing at UFC Fight Night 198, Miesha Tate proved she’s still in great shape. Less than a year ago, Tate (19-8 MMA, 6-5 UFC) became a mom for the second time and she decided to come out of retirement shortly after. A “Performance of the Night” finish of Marion Reneau in July set her up with a pivotal clash with Ketlen Vieira this past Saturday at UFC Fight Night 198, but Tate was ultimately outlasted.
UFC・13 DAYS AGO
fcfighter.com

After first win with promotion at UFC Fight Night 198, Rafa Garcia wants to get back his first pair of losses

LAS VEGAS – Rafa Garcia defeated Nathan Levy in a unanimous decision on the preliminary card at UFC Fight Night 198 which took place at the UFC Apex in Las Vegas. After a rocky start with the UFC, Garcia was emotional after securing his first victory in his third bout with the promotion.
UFC・14 DAYS AGO

A rising star has debuted in the welterweight rankings. Undefeated Sean Brady picked up the biggest win of his career thus far at UFC Fight Night 198, defeating Michael Chiesa via unanimous decision at the UFC Apex in Las Vegas. The fifth win of his UFC tenure launched Brady from unranked to No. 9, taking Chiesa’s place, who falls one spot to No. 10.
UFC・13 DAYS AGO
USA Today

Two of the hottest lightweight fighters in the world today will collide in a main event early next year as Beneil Dariush and Islam Makhachev are expected to headline a UFC Fight Night event on Feb. 26. This is according to a recent report by ESPN’s Brett Okamoto. The lightweight...
UFC・10 DAYS AGO
boxingnewsandviews.com

If death is a beautiful thing, which it is by the way, so is life by the way, and if you’re a boxing fan — so is seeing the stories of some of these tremendous young fighters in the sport of boxing at a time. Continuing to compete in what...
COMBAT SPORTS・5 HOURS AGO

Ketlen Vieira has made a huge statement with a win over former bantamweight champion, Miesha Tate at UFC Fight Night 198 this past week. The Brazilian feels like she will be soon having the taste of her first championship bout in the promotion. Vieira hasn’t enjoyed a smooth run in...
UFC・13 DAYS AGO
bjpenndotcom

A streaking contender and a former title challenger are expected to meet next year. Manon Fiorot and Jessica Eye have agreed to fight at an upcoming UFC Fight Night scheduled for early March, according to a report from Farah Hannoun of MMA Junkie on Thursday. The location and venue of the event has yet to be determined.
UFC・4 DAYS AGO
mymmanews.com

2022 is already knocking on the door, but it can’t come fast enough for the UFC fans. UFC is one of the most respected fighting companies in the world, and they are ready to secure their place on the top with their program for the following year. What is next...
UFC・7 DAYS AGO
fightsports.tv

Two of the most promising fighters of the lightweight division, Joe Alvarez and Arman Tsarukyan, will find out who deserves to be inside the top 10 rankings. Alvarez (19-2) will meet Tsarukyan (17-2) will share the octagon at a UFC Fight Night event on February 26. Alvarez just won his...
UFC・7 DAYS AGO
ufc.com

Roman Dolidze has been removed from his middleweight bout with Brendan Allen. Replacing Dolidze will be Chris Curtis, who turns around on short notice following his first-round KO win over Phil Hawes at UFC 268 earlier this month. Philipe Lins has been removed from his light heavyweight bout with Azamat...
UFC・6 DAYS AGO
USA TODAY Sports Media Group

Jan Blachowicz has his first fight booked since losing the light heavyweight title. Blachowicz (28-9 MMA, 11-6 UFC) is targeted to meet Aleksandar Rakic (14-2 MMA, 6-1 UFC) in the main event of UFC Fight Night on March 26. The card doesn’t yet have an announced venue or location. Two...
UFC・6 DAYS AGO