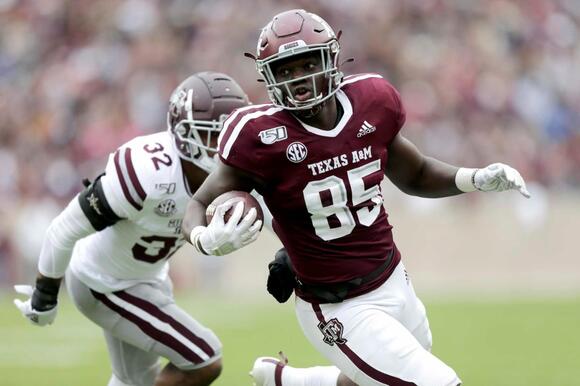 Texas A&M star Jalen Wydermyer set yet another school record on Saturday night vs. South Carolina, when the senior became the all-time leader in receiving yards by a tight end, passing Martellus Bennett.

Wydermyer set the record on a 25-yard reception from Zach Calzada early in the second quarter, with the Aggies leading 14-0.

Just a few plays later, Wydermeyer found his way into the end zone for the Aggies, hauling in a 28-yard touchdown pass from Calzada, and extending the Aggies lead.

Coming into the game, Wydermyer had 99 career receptions for 1,231 yards and 14 touchdowns, averaging 12.4 yards per catch in his three seasons.

Wydermyer already owns A&M’s career record for touchdown catches by a tight end with 12, and is on pace to set the career mark for tight ends in receiving yards and receptions.

Wydermyer was named as an All-SEC performer in both the 2019 and 2020 seasons, and looks to be well on his way to reaching that honor again in 2021.

So far this season, Wydermyer has 21 catches for 278 yards and two scores.

Want to join in on the discussion? Click here to become a member of the All Aggies message board community today!

Mike Leach has been a thorn in Texas A&M's side since his days at Texas Tech.
COLLEGE STATION, TX・1 DAY AGO
All Aggies

Three key takeaways from the Aggies' loss to the Bulldogs.
STARKVILLE, MS・57 MINUTES AGO
All Aggies

Nothing to be gained by trying to figure out what went on over six plays in the fourth quarter because ignorance is bliss
FAYETTEVILLE, AR・26 MINUTES AGO
All Aggies

Max Johnson could miss the remainder of Saturday's game.
COLLEGE STATION, TX・1 HOUR AGO
All Aggies

The Aggies take on the Bulldogs in their second game in SEC play.
COLLEGE STATION, TX・5 HOURS AGO

The new protocol could go into effect as soon as Week 5.
NFL・23 MINUTES AGO
All49ers

49ers vs. Rams Preview/Prediction: Will Jimmy Garoppolo Find his Rhythm?

Jimmy Garoppolo and the 49ers offense will have to lock in for a tough matchup against the Rams defense. Otherwise, they will surely lose their second straight game.
NFL・27 MINUTES AGO
All Aggies

Texas A&M Aggies Recruiting Tracker: Check back often as we keep you up-to-date on Texas A&M looking to improve on an already impressive class
COLLEGE STATION, TX・2 DAYS AGO
The Associated Press

The NFL Players Association has fired the unaffiliated neurotrauma consultant who evaluated Miami Dolphins quarterback Tua Tagovailoa after he stumbled off the field against Buffalo last weekend, a person familiar with the decision told The Associated Press on Saturday. The person who confirmed the firing, which was first reported by Pro Football Talk, spoke to the AP on condition of anonymity because a joint review by the NFL and its players’ union into Tagovailoa’s quick return to Sunday’s game is ongoing. There are three unaffiliated neurotrauma consultants (UNC) at each game. They are jointly paid by the league and the players’ union to work with team physicians to diagnose concussions. The NFLPA is exercising its right to terminate the UNC directly involved in the decision to clear Tagovailoa, who sustained a concussion following a frightening hit just four days later at Cincinnati on Thursday night. Tagovailoa initially seemed to exhibit concussion symptoms after the hit to his head during the home game against Buffalo, but he was cleared by a team physician and UNC to return. He and the team later explained his legs were wobbly because of a back injury.
NFL・24 MINUTES AGO