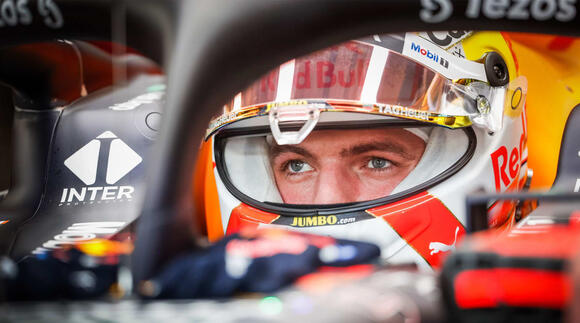 Sergio Perez held the provisional pole position until Lewis Hamilton passed his time in a flying final lap, only for championship rival Verstappen to do the same.

In a flying final lap of qualifying, Max Verstappen snagged the pole position for the United States Grand Prix from Lewis Hamilton, who will be P2.

This will be the seventh time this season the two will lock out the front row. Verstappen leads the drivers' standings with 262.5 points while Hamilton trails at 256.5 points.

"It was exciting out there," Verstappen said. "P1 and P3 for the team is a very strong performance. I hope to have a good start tomorrow for the best possible result"

For a period of time, it looked like Verstappen's teammate, Sergio Perez, was going to have the pole position. He crossed the line with 6:44 to go, tallying a time of 1:33.180, and was met with loud cheers from the Austin crowd.

It would've been his first Formula One pole, per the Sky Sports broadcast.

“Yeah, well we were really close on that final lap, I think we did a great job as a team," Perez said. "Tomorrow it’s a very long race. I think qualifying position is not too relevant. There will be a lot of degradation on these tires. Just looking forward to it."

Perez was the fastest in both practice two and three, driving a 1:34.701 that beat Carlos Sainz by a 10th of a second. Meanwhile, Verstappen and Hamilton, championship rivals, both had their fastest times deleted due to breaking track limit rules at the Circuit of the Americas.

Lewis Hamilton took a commanding pole position at the first ever Qatar Grand Prix after working long into the night to get the upper hand in his quest to get the better of Max Verstappen and lift an eighth Formula One world title. The reigning champion is currently 14 points...
MOTORSPORTS・13 DAYS AGO
motorsportmagazine.com

Hamilton takes pole ahead of Verstappen: Qatar GP qualifying as it happened

Lewis Hamilton was the only man to break into the 1min 20s and took a crucial pole position from his title rival Max Verstappen. The Red Bull was almost half-a-second down on the pole sitter but a dramatic moment for Pierre Gasly prevented many improvements in the final part of qualifying following a puncture.
MOTORSPORTS・13 DAYS AGO
motorsportmagazine.com

Nineteen down, three to go in one of the most absorbing world championship fights in motorsport history. Coming to Qatar we’d gone from a scenario where the leading two were split by milliseconds, to one where one of them was able to start at the back and finish at the front.
MOTORSPORTS・13 DAYS AGO
f1i.com

Lewis Hamilton was celebrating pole position for the inaugural Qatar Grand Prix after showing a clean pair of heels to Max Verstappen and Valtteri Bottas in Saturday's twilight qualifying session at Losail International Circuit. It was especially sweet for the reigning world champion after he admitted struggling to find the...
MOTORSPORTS・13 DAYS AGO

Wolff pleased to see Verstappen in P2: He'll start on the dirty line

Toto Wolff believes that Mercedes will have a key advantage over Red Bull's Max Verstappen at the start of the Qatar Grand Prix. Mercedes boss Toto Wolff has explained that first and third is the result he wanted to achieve during qualifying for the Qatar Grand Prix, as both his drivers will be starting the race on the 'clean' side of the grid.
MOTORSPORTS・13 DAYS AGO
motorsportmagazine.com

Formula 1’s first ever Qatar Grand Prix resulted in a calm and collected victory for Lewis Hamilton, with Max Verstappen recovering from seventh on the grid to finish second. Verstappen had been given said penalty for ignoring double-waved yellows in qualifying after Pierre Gasly’s accident, with Valterri Bottasstarting in eighth.
MOTORSPORTS・12 DAYS AGO
Telegraph

Lewis Hamilton took pole at the first Qatar GP, after going four-tenths quicker than his title rival Max Verstappen, who could be given a grid penalty in Sunday
MOTORSPORTS・13 DAYS AGO

Lewis Hamilton set a blistering pace to take pole position for the Qatar Grand Prix by nearly half a second. Red Bull's Max Verstappen, 14 points ahead of Hamilton in the title race, was 0.455 seconds behind in second. Hamilton's team-mate Valtteri Bottas was third, 0.196secs behind Verstappen with Alpha...
MOTORSPORTS・13 DAYS AGO
Reuters

Lewis Hamilton has revealed how he overcame a stomach ache to produce a sensational drive in qualifying to grab pole position at the Qatar Grand Prix.The seven-time world champion landed his 102nd pole position of his career, with Max Verstappen alongside him on the front row.But Hamilton’s +0.455 advantage over the Red Bull was the largest gap in dry qualifying this year, emphasising the great potential of the Mercedes in the closing stages of the season.And after overcoming his illness, Hamilton praised the Mercedes engineers for working late into the night to find solutions.“On Friday and Saturday I wasn't feeling...
MOTORSPORTS・13 DAYS AGO
The Independent

After a dramatic two days of hearings and verdicts, the focus of Lewis Hamilton and Max Verstappen’s title race will return to the track as they battle for pole position ahead of Sunday’s Qatar Grand Prix. Verstappen leads Hamilton by 14 points with three races of the season remaining, but the seven-time world champion cut that lead with a stunning win at the Brazilian Grand Prix last weekend. The Red Bull driver escaped punishment for forcing Hamilton off the track in Sao Paolo, after the FIA declined to re-open their investigation into the incident following a challenge from Mercedes. Verstappen...
MOTORSPORTS・13 DAYS AGO

Race stewards have rejected Mercedes’ right to review the incident from the Brazilian Grand Prix which threatened to see Max Verstappen hit with a time or grid penalty.He was fastest in first practice at the Qatar Grand Prix on Friday, ahead of Pierre Gasly and Valtteri Bottas.Verstappen and Lewis Hamilton have had several run-ins this season, with their on-track racing as closely fought as the battle in the driver standings for the 2021 title.Sunday’s race in Brazil saw another coming together, albeit a less-dramatic one than in Monza, as Hamilton was forced off the track when he tried to overtake...
MOTORSPORTS・14 DAYS AGO
firstsportz.com

With only 2 races left in the Formula 1 season, the title fight between Max Verstappen and Lewis Hamilton is very much alive and exciting. With the Qatar Grand Prix up next, the pressure is on for teams to deliver. With the Qatar GP being held for the very first time, the drivers and fans did not know what to expect going into qualifying.
MOTORSPORTS・13 DAYS AGO
f1i.com

Guess that track, with Verstappen, Perez and Albon!

F1 drivers claim they could drive a track with their eyes closed, but can they draw a circuit based on a description and then guess the venue?. Well, Red Bull put Max Verstappen, Sergio Perez and Alex Albon to the task to find out, with each driver sketching a layout from the 22-race 2021 season and attempting to guess the track.
MOTORSPORTS・7 DAYS AGO
Daily Mail

Max is BACK in the dock! Verstappen is called in front of the stewards for 'ignoring' yellow flags in frantic Qatar GP qualifying session... with pole sitter Lewis Hamilton hoping for a race-day boost against title rival

Lewis Hamilton was handed a world championship boost on Saturday night when Max Verstappen was summoned to the stewards for seemingly ignoring double-waved yellow flags during qualifying for the Qatar Grand Prix. The championship leader will learn his fate following the hearing today at 1pm here in Doha and 10am...
MOTORSPORTS・13 DAYS AGO
f1i.com

Mercedes says that it could not respond to Max Verstappen's late but successful effort to snatch the fastest lap in Qatar as Lewis Hamilton was constrained by time. Red Bull brought Verstappen in for a fresh set of soft tyres with just two laps to go in last Sunday's race and succeeded in adding an extra point to his tally, thus limiting his deficit in the Drivers' standings to 8 points ahead of the final two rounds of the season.
MOTORSPORTS・8 DAYS AGO
The Independent

Lewis Hamilton stormed to pole position in Qatar before insisting there is still no clarity on how hard the drivers can race.The reigning world champion eclipsed rival Max Verstappen under the lights of the Losail International Circuit to gain an upper hand in their increasingly bitter title fight – especially with a potential grid penalty hanging over the Dutchman’s head.Hamilton took the chequered flag at the Brazilian Grand Prix last weekend to close the gap in the drivers’ championship to 14 points with three races remaining.Felt like we were flying out there, what a special lap. Little changes add up...
MOTORSPORTS・13 DAYS AGO
The Independent

Lewis Hamilton is in the midst of the most exciting Formula One title battle in recent memory but insists he is uncomfortable racing in Saudi Arabia highlighting the country’s “pretty terrifying” LGBTQ+ laws.The inaugural race in Jeddah is the penultimate grand prix of the 2021 season in which reigning champion Hamilton and Red Bull’s Max Verstappen have tussled for the title.Verstappen is just eight points clear heading into Sunday’s race in Saudi Arabia but Hamilton has the momentum of winning the previous two races for Mercedes.One of those came in Qatar a fortnight ago where the Brit spoke...
MOTORSPORTS・1 DAY AGO
racingnews365.com

Red Bull explain the difference between Verstappen and Perez