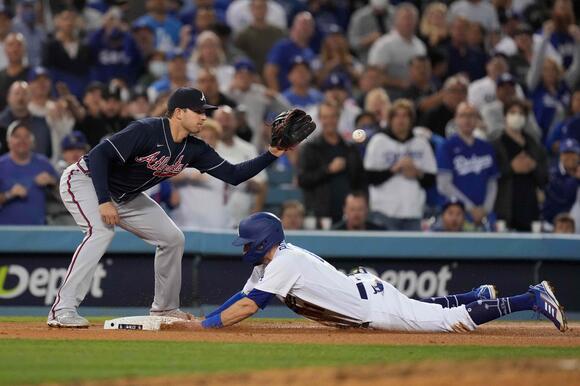 The Astros are going to their third World Series in five years after handing the Boston Red Sox a third straight Assing last night in Game Six of the ALCS.

As a result of last night’s win, the 'stros get to sit back and watch Atlanta and Los Angeles conclude the NLCS this weekend.

Here are 10 reasons I would like to see the Braves beat LA and send the Dodgers packing.

3. The annoying Dodgers players not being able to hold up their end of the deal would be entertaining. I understand their beef with the Astros, but it would be amusing for them to not even get their chance at the Stros post-cheating.

4. Martin Maldonado and a pitcher hitting potentially four times instead of three. The Dodgers would have home field advantage, which means more possibilities of a pitcher and Maldy, who hits worse than a pitcher, having to bat.

5. The old school NL Astros-Braves rivalry revived and the irony of the Stros looking to avoid being the Braves, winning just one ship in the Golden Era.

6. The ATL playoff environment and ATL could use some good news and deserve to have a World Series. LA doesn’t need anymore glory and wouldn’t appreciate it.

7. Charlie Morton and Freddie Freeman. I genuinely like those guys. Outside of Mookie Betts and Clayton Kershaw the overwhelming majority of the Dodgers roster has a turdish, unlikable vibe.

8. The fake celebrity fans supporting the Dodgers. Nothing worse.

9. Dodger Stadium kinda sucks. I know that Stadium has been good to the Astros and it’s pretty much their house, but the ballpark is just doesn’t look as good on the TV as other ballparks. Has a real softball or Little League World Series vibe.

10. If I’m being honest, I think the Dodgers are better than the Braves, even with all their injuries. Factor in home field and then chip they’d have on their shoulder facing the Stros and I’d rather see ATL.

The 2021 MLB offseason is in full swing, and dominoes are already starting to fall. One of the biggest storylines this winter revolves around the stacked group of free-agent shortstops. Some superstars at that position could find themselves playing for new teams in 2022, and Javier Baez is one guy...
MLB・13 DAYS AGO
NJ.com

Houston, we have a problem. The New York Yankees watched the Astros swoop in Wednesday and sign free-agent right-hander Justin Verlander to a one-year, $25 million contract. That’s good money for a 38-year-old coming off Tommy John surgery. The Yankees were among a handful of teams linked to the two-time...
MLB・11 DAYS AGO

An MLB Network analyst eyes this former Dodger to replace Andrew McCutchen. When the Philadelphia Phillies declined the $15 million team option for fan-favorite outfielder Andrew McCutchen earlier this month — making him a free-agent — the left field position immediately became one of the biggest areas the organization has to address this offseason.
MLB・13 DAYS AGO
FanSided

The Los Angeles Dodgers had a major depth issue in 2021. There’s not much to debate, either. When Steven Souza Jr. is getting meaningful reps in the NLCS, the problem speaks for itself. On Friday, the Dodgers took the necessary steps by clearing space off their 40-man roster, and two...
MLB・6 DAYS AGO
FanSided

The real reason Justin Verlander is staying with the Houston Astros

Loyalty was a deciding factor in Justin Verlander staying with the Houston Astros. Despite interest from numerous teams and declining his qualifying offer, Justin Verlander will still be a Houston Astro in 2022. The two-time Cy Young-winner and the Astros are in agreement on a one-year deal for $25M with...
MLB・11 DAYS AGO
CBS Sports

As we count down the days until the CBA expires on Dec. 1, we've got some action on the MLB rumor front. So now let's have a quick stroll though those sun-dappled meadows of scuttlebutt... Sixth year sticking point with Freeman, Braves. Freddie Freeman, first baseman and warrior-poet of the...
MLB・12 DAYS AGO

Seven years after signing a $210 million deal with the Washington Nationals in free agency -- which we ranked as one of the greatest deals in MLB history -- Max Scherzer is again a free agent. And even as he prepares for his age-37 season, Scherzer remains among the best...
MLB・24 DAYS AGO
ClutchPoints

Max Scherzer is a free agent for the second time in his career. He’s a three-time Cy Young Award winner and was sensational for both the Washington Nationals and the Los Angeles Dodgers last season. He’s the type of guy who can come in and not only help a team...
MLB・8 DAYS AGO
dodgerblue.com

The Los Angeles Dodgers had Will Smith, Max Muncy, Justin Turner, Corey Seager, Trea Turner, Mookie Betts, Walker Buehler, Max Scherzer, Julio Urias and Kenley Jansen named among the nominees for the 2021 All-MLB Team. This is the third annual recognition for the top players, with winners being announced on...
MLB・18 DAYS AGO
610AM Sports Radio

The last time he pitched a Game 6 at Minute Maid Park was less than two weeks ago, when Garcia gave up just one hit, struck out seven and walked only one in 5 2/3 innings to help lead Houston to the pennant.
MLB・27 DAYS AGO

Trailing game 5 of the World Series 4-0, 23 outs away from elimination, Alex Bregman started the Astros comeback by lacing Tucker Davidson’s 2-2 fastball into the right-center gap for a double that scored the Astros first run and setup their second.
MLB・27 DAYS AGO
610AM Sports Radio

Back like he never left: Marwin González adds to Astros World Series legend

González spoke after the game about his teammates welcoming him back like he never left. He spent his first seven Major League seasons in Houston (2012-2018), and like Altuve, was there for the 100-loss seasons all the way through the 2017 title run.
MLB・28 DAYS AGO
610AM Sports Radio

Astros have options at shortstop if Correa leaves

With the assumption Carlos Correa will be wearing a different uniform by the time spring training starts, here’s a look at three players who could fill his shoes.
MLB・24 DAYS AGO
610AM Sports Radio

Dukes: Braves 'feel really good' up 3-2 against Astros in Houston

Carlos Correa is no longer employed by the Astros. His contract essentially expired when Dansby Swanson’s throw landed in Freddie Freeman’s glove before Yuli Gurriel crossed first base, so now an offseason full of uncertainty begins
MLB・26 DAYS AGO
610AM Sports Radio

Correa led all Major League players in Defensive WAR (Wins Above Replacement) at 2.9. Gurriel, 37, became the oldest player to win a Gold Glove at first base. He also led AL first basemen in zone rating (.874) and assists (86).
MLB・21 DAYS AGO
610AM Sports Radio

Maldonado produced runs in three different ways to help send the series back to Houston. There was the sacrifice fly to score Kyle Tucker in the second inning, which cut Atlanta’s lead to 4-2 after Adam Duvall’s first-inning grand slam.
MLB・28 DAYS AGO
610AM Sports Radio

Bregman on Monday morning posted a photo on his Instagram stories, smiling, wearing a cast and giving a thumbs up after the surgery. He is expected to be ready for spring training.
MLB・21 DAYS AGO