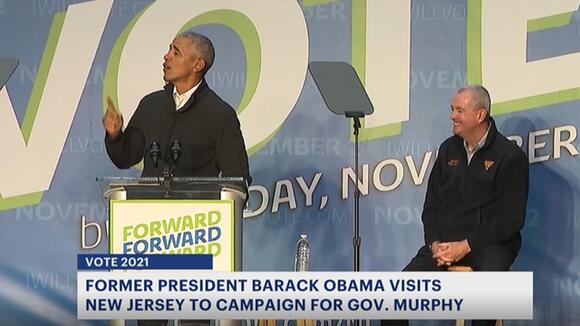 Murphy campaigned in Weequahaic Park alongside a heavy hitter in his party, former President Barack Obama.

Gov. Murphy served as the Obama administration’s ambassador to Germany from 2009 to 2013 before Murphy departed to prepare his run for governor of New Jersey.

The first Black president rallied to bring out the vote from New Jersey’s Black community which could be vital to make the governor the first Democrat to win a second term since Brendan Byrne in 1977.

Obama said that without strong Democratic turnout, Murphy could lose to Ciattarelli the way Hillary Clinton suffered a stunning defeat to Donald Trump in 2016.

Meanwhile, Ciattarelli campaigned up and down the Jersey Shore and Middlesex County.

"We can win this race. Do not let anybody stay home because they think we can't win or it's rigged," Ciattarelli said.

Polls show Murphy's lead in the high single digits but narrowly in the last few days, but that's come down from a 26-point lead in the summer.

"The only poll that matters is the one we take on Nov. 2, I couldn't be happier with where the campaign is, the energy up and down the state. We're right where we need to be," Ciattarelli said.

Saturday was the first year of early, in-person voting in New Jersey, and voting will continue until Halloween.

Every town must have at latest one polling place for early voting, though not every regular Election Day polling place will be open.

Former President Obama campaigned for Democrats in New Jersey and Virginia, as polls indicate a tighter than expected race in both states.

President Joe Biden is also set to visit the Garden State on Monday, but not for a campaign trip. Instead, it will be an official visit about his infrastructure plan.

Obama was booed off the stage in Newark... u don't see it anywhere on the news..

Republicans have been focusing on this issue for weeks and now some Democrats want Gov. Ned Lamont to order a wider audit of COVID-19 relief spending.
PUBLIC HEALTH・22 HOURS AGO
News 12

Gov. Phil Murphy is promoting his third set of gun reform bills, and hopes to have them passed by the end of the legislative session.
POLITICS・2 HOURS AGO
News 12

The omicron variant is coming closer to New Jersey, and as of today, five cases are confirmed in New York.
NEW YORK CITY, NY・6 HOURS AGO
News 12

The Senate passed a stopgap spending bill Thursday that avoids a short-term shutdown and funds the federal government through Feb. 18 after leaders defused a partisan standoff over federal vaccine mandates. The measure now goes to President Joe Biden to be signed into law.
CONGRESS & COURTS・20 HOURS AGO

The governor says one case was reported in Suffolk County, a 67-year-old woman with mild symptoms and vaccination history– and at least one person traveled from South Africa.
SUFFOLK COUNTY, NY・20 HOURS AGO
News 12

Gov. Hochul has continually emphasized that her and NYC officials were aware that it was “only a matter of time” before the new variant arrived in the state, and as a response to the new variant’s arrival have passed an executive order to limit elective surgeries at hospitals.
NEW YORK CITY, NY・1 HOUR AGO
News 12

‘There will be more cases’: 5 omicron cases confirmed in NY; state braces for more

Health officials say while much isn’t known about the strain, it's important not to panic because the U.S. is much better equipped to fight the virus than it was just a few months ago.
NEW YORK CITY, NY・6 HOURS AGO

With four of five cases of the omicron variant in New York City, Gov. Kathy Hochul and President Biden are chiming in on what the next steps are.
NEW YORK CITY, NY・13 HOURS AGO
News 12

Jersey City Mayor Steven Fulop was joined by Gov. Phil Murphy and members of the Jewish community on the fifth night of Hanukkah to light the menorah.
JERSEY CITY, NJ・20 HOURS AGO
News 12

At-home rapid tests aren't as reliable as a test in a lab or medical facility, but experts say they are still useful. The accuracy is about 86%, according to doctor.
U.S. POLITICS・20 HOURS AGO
News 12

Officials say nearly 3,600 cases were reported Thursday. The last time the numbers were that high was back in April.
COLLEGES・20 HOURS AGO

Multiple cases of the omicron coronavirus variant have been detected in New York, health officials said Thursday, including a man who attended an anime convention in Manhattan in late November and tested positive for the variant when he returned home to Minnesota.
NEW YORK CITY, NY・20 HOURS AGO
News 12

Lembo was diagnosed with debilitating cardiac condition that has recently worsened. After repeatedly consulting with cardiologists, Lembo was recommended to not continue working.
CONNECTICUT STATE・36 MINUTES AGO
News 12

A Long Islander is one of five of the first cases in New York. The other four were in the New York City area.
NEW YORK CITY, NY・6 HOURS AGO
News 12

The 67-year-old woman from Suffolk recently traveled from South Africa and was at least partially vaccinated when she tested positive on Tuesday.
SUFFOLK COUNTY, NY・12 HOURS AGO