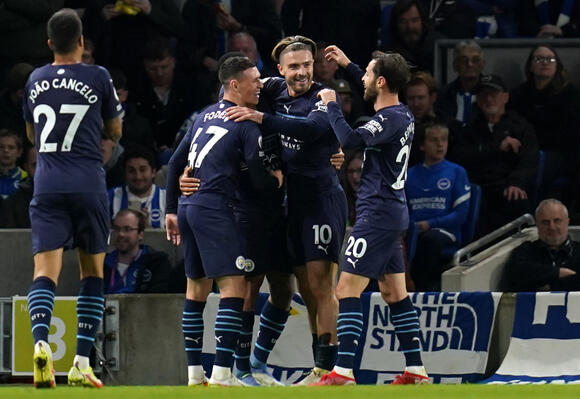 The Premier League champions made it two on the spin following their recent 2-0 win against Burnley at the Etihad Stadium, as Phil Foden bagged an unconventional brace after Ilkay Gundogan's opener to breeze into a comfortable three-nil lead.

However, it was a game of two halves for City, and after the break they were dominated by the Seagulls.

Despite Ederson conceding a penalty to let Brighton back into the game, Guardiola's men managed to earn all three points after finally regaining some composure in the final few minutes.

Made far more saves than he's usually asked to, including some very good stops. However, a needless foul in the box undid all that hard work and he can only blame himself for losing the clean sheet. Booked for time-wasting. Would have been a 7 if not for the rash penalty.

Solid both up and down the right flank, despite being tested in defence.

Another imperious game from the Portuguese, who nearly managed to guide the team to a clean sheet despite a second half where City were under an unfathomable amount of pressure.

Slightly fortunate to get away with an under-hit back pass that almost benefitted Maupay, but it all proved inconsequential after another great all-round performance, especially as Brighton grew into the game.

Rarely have City seen a full-back who can consistently make an attacking impact like the 27-year-old, who was at it again with some great link-up play with Grealish.

Continued to do what he has all season, barring one heart-in-mouth mistake at the end of the first half. A place in the PFA Team of the Year beckons if he keeps this up. Less influential in the second half as Brighton were superb, but that could be said of many City players today.

Magnificent on the ball and off it. Hooked an acrobatic no-look pass into Gundogan's path to create the opener- he's got so much more creative freedom when De Bruyne's not in the team. Also crucial in the counter for the second goal.

It was reminiscent of last season's incredible goalscoring form when he nipped into space to tap in the opener. Still the same technically brilliant, painfully underappreciated player he's been for the last several years.

Played a big role in the first two goals - a real threat all evening down the left, and the 26-year-old really seems to have settled into City's passing tempo now. One of his best games for Guardiola's side so far.

This man just looks frighteningly good, and seems to be adapting to the central role now he's had a run of games there. Forced the own goal with his pace and some smart movement, and thoroughly deserved his goal he got minutes later.

Unlucky to have the ball cleared off the line, then won it back for City's first goal in a tenacious battle with Robert Sánchez. Caused the third with a shot from a rebound just seconds after some brilliant footwork to set up Grealish. Even helped out in defence.

Came on to shore up the defence, but City still couldn't keep the ball after his introduction.

Barely got a sniff as the midfield completely folded to Brighton's pressure.

Scored yet again to end the game on a high, which was nice after a tough second-half watch.

Leeds United travel south to face Brighton at the Amex on Saturday evening, aiming to pick up a much-needed victory. Marcelo Bielsa's men currently sit just one place above the dreaded drop zone, having won just twice all season. Their form had looked to be improving in the weeks leading up to the international break, although they've only found victory once in their last five Premier League outings - coming away at lowly Norwich - and most recently gave up a 1-0 half-time lead to lose at Tottenham, leaving them just two points clear of Burnley in 18th.
PREMIER LEAGUE・7 DAYS AGO
vavel.com

Marcielo Bielsa spoke after the 0-0 draw against Brighton. If Marcelo Bielsa decides to make a substitution, these are the available players. Cresswell, Gelhardt, Jenkins, Klaesson, Klich, McCarron, Roberts, Shackleton, Struijk. 12:18 PM2 days ago. Bench of the home team. The players that DT Potter has at his disposal. Duffy,...
PREMIER LEAGUE・6 DAYS AGO
The Independent

Is West Ham vs Brighton on TV tonight? Kick-off time and how to watch Premier League fixture

West Ham United welcome Brighton and Hove Albion to the London Stadium in the Premier League this evening. After such a spectacular start to the season, the Hammers’ momentum has been halted by back-to-back defeats against Wolves and Manchester City. However, they still remain in the top four, ahead of Arsenal on goal difference. Brighton’s form has taken a far more dramatic dip in recent weeks, though, having now failed to win a top-flight match since 19 September. After a frustrating draw against Leeds last time out, a flustered Graham Potter hit back at the club’s discontented supporters. “Maybe...
PREMIER LEAGUE・2 DAYS AGO
The Guardian

Ralf Rangnick has spoke about his appointment as Manchester United interim manager and his plans for the team. Join Dave Tindall now
PREMIER LEAGUE・17 HOURS AGO

Clockwatch: Chelsea, Man City and Liverpool all won to keep the pressure on each other at the top of the table, while Everton fans are increasingly mutinous
PREMIER LEAGUE・2 DAYS AGO
The Independent

Cristiano Ronaldo has paid tribute to Ole Gunnar Solskjaer following the Norwegian’s sacking as Manchester United coach.Solskjaer was relieved of his duties on Sunday morning, with his side having fallen to a 4-1 defeat at struggling Watford on Saturday.That result was the latest in a poor run that had included a 5-0 home thrashing by rivals Liverpool and a 2-0 derby loss to Man City.Ronaldo returned to United this summer to play under Solskjaer, who was a teammate of the Portuguese at Old Trafford between 2003 and 2007.Now the 36-year-old has bid Solskjaer a warm farewell, writing on...
PREMIER LEAGUE・11 DAYS AGO
The Independent

When Thomas Tuchel comes in after games and scans the other results, he doesn’t automatically go to Liverpool or Manchester City. At least not yet.“There are some teams behind us who show consistency, who show quality, who show determination,” the Chelsea manager said last week. “This is what it is. You have a right to be proud of your competition here, in the Premier League, and for us it feels good because we are in the middle of that race and we want to stay here. I don’t know if it will settle down.”There is a bit of a...
PREMIER LEAGUE・2 DAYS AGO
SB Nation

Pep Guardiola’s men went into the international break with a 2-0 controlled destruction of Ole Gunnar Solskjaer’s Manchester United at Old Trafford. Now, the Blues are now back in action after what feels like an eternity, as they host Everton on Sunday afternoon at the Etihad Stadium. City did a...
PREMIER LEAGUE・13 DAYS AGO
CityXtra

The final international break of 2021 is officially over, and for four months it's purely club football. The famously hectic winter schedule is now upon us, and it's normally the time we find out who the real contenders are for the Premier League crown. Pep Guardiola will be hoping his...
PREMIER LEAGUE・12 DAYS AGO
firstsportz.com

It was a horrifying scene at Vicarage road for Manchester United as they were beaten by 4-1 by the home team, Watford. This turned out to be one of their worst nightmares as the Reds dropped down to seventh in the league after the loss. As for Watford, they moved up to 17th, staying clear of the relegation zone.
PREMIER LEAGUE・13 DAYS AGO
firstsportz.com

Chelsea didn’t lose their momentum after the international break and restart their campaign against Leicester with an emphatic 3-0 win. Right from the 1st minute, Tuchel’s men were pressing high to score and Chelsea get their 1st goal in the 14th minute by Chilwell’s corner courtesy of header by Rudiger. Then Kante joins the party and scores to give Chelsea 2-0 lead in 28th minute itself. In the 1st half, Leicester had some half chances to score but it was denied by offside but in 2nd half, Chelsea dominated the game completely and in the end, substitute Pulisic scored to give 3-0 win away from home.
PREMIER LEAGUE・13 DAYS AGO

The Blues moved three points clear of David Moyes' highflying Hammers side with a 3-0 win over Everton on Sunday afternoon, as goals from Raheem Sterling, Rodri and Bernardo Silva secured an eighth league win of the season. West Ham's fine winning run came to an abrupt end against Wolves...
PREMIER LEAGUE・11 DAYS AGO
firstsportz.com

West Ham passed up the opportunity to leap-frog Manchester City into second place on the Premier League table following a 1-0 loss at the hands of Wolverhampton Wanderers. Raul Jimenez scored the only goal of the game as West Ham simply didn’t manage to find the back of the net despite throwing the kitchen sink towards the end of the game.
PREMIER LEAGUE・13 DAYS AGO
Yardbarker

The Premier League champions brushed Everton aside to continue their impressive record over the Toffees and keep in touch with league leaders Chelsea. A superb Raheem Sterling goal was the catalyst, with Rodri scoring a screamer to end Everton's fightback hopes before Bernardo Silva wrapped it up late on. There...
PREMIER LEAGUE・12 DAYS AGO
Absolute Chelsea

The Blues will face off against Rafa Benitez’s Everton side on Sunday, and with the Sky Blues’ looking to retain their Premier League crown for the second time under their current manager, Pep Guardiola will be eager to see his side continue their winning ways. Everton are currently enduring a...
PREMIER LEAGUE・13 DAYS AGO
CityXtra

Pep Guardiola’s men came back strong against Club Brugge and Manchester United before the international break, with the Citizens making a mockery of their cross-town rivals in a 2-0 victory courtesy of an all-round effort from the whole team. As we return from yet another dreadful international break, all the...
PREMIER LEAGUE・12 DAYS AGO
The Independent

Manchester City hit back in the final half an hour to beat Paris Saint-Germain 2-1 and seal top spot in Group A of the Champions League. Goals by Raheem Sterling and Gabriel Jesus were no more than City deserved after dominating for much of the game without reward, denied time after time by PSG’s last-ditch defending. Kylian Mbappe’s goal on the break gave PSG the lead early in the second half, but they could not hold on.Here’s how every player rated. Manchester CityEderson, 5: Had very little to do, but will think he could have done better with Mbappe’s goal...
PREMIER LEAGUE・9 DAYS AGO