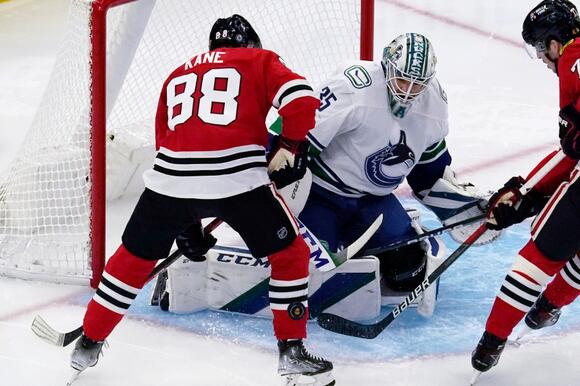 The announcement doesn’t necessarily mean that any of the players tested positive. General manager Stan Bowman said during training camp that the team was 100% vaccinated.

“At this point, those guys are in the protocol, and we don’t really know day to day how it’s going to develop,” coach Jeremy Colliton said. “For the most part, it’s out of our control, so we’ll adjust as things develop here.”

Chicago hosts the Detroit Red Wings on Sunday night. The struggling Blackhawks are off to a 0-4-1 start.

The Blackhawks recalled forward Reese Johnson from Rockford of the American Hockey League. Johnson had a goal and an assist during the IceHogs’ 6-3 loss to Iowa on Friday night.

CALGARY – They entered this swing to the Pacific Northwest and Canada playing their best hockey of the very young 2021-2022 season, and that continued at times during a four-game stretch away from home. But through their four-game trip, the strong stretch under interim head coach Derek King cooled just a little bit, as the […]
NHL・2 DAYS AGO
WGN News

LAKE FOREST, Ill — For some, it’s become a matter of if instead of when, but a report on Wednesday morning made it seem like the Bears would make an on-field leadership change sooner than later. Per a report from Mark Konkol of Patch on Tuesday morning, the Bears have already informed Matt Nagy that […]
NFL・3 DAYS AGO
WGN News

LAKE FOREST – A story that has consumed the Bears over the last 24 hours took yet another twist early Wednesday afternoon. This time, a report indicates that head coach Matt Nagy won’t be done with the team after their game Thursday afternoon with the Lions. Per Dan Pompei of The Athletic, team chairman George […]
NFL・2 DAYS AGO
The Hockey Writers

Blackhawks Should Not Trade Kane or Toews

Captain Serious and Showtime. No.’s 19 and 88. Canadian and American. Captain and (now, finally) full-time alternate captain. These are just a handful of words to describe the two most-iconic forwards in Chicago Blackhawks’ history: Jonathan Toews and Patrick Kane. I could be feeling a little nostalgic writing this piece, but I truly do believe that it’s in the organization’s best interest to keep these two until they hang up the skates and call it a career. Why? Two reasons: first, they still have some great hockey left in them, and second, I believe that any future success starts with the intangibles that these two bring to the team.
NHL・6 DAYS AGO

On Thursday afternoon, the Chicago Bears and Detroit Lions stepped on the field for a pivotal NFC North showdown. Neither team has much to play for – except pride. Matt Nagy is desperately trying to hold onto this job as the Bears head coach. Meanwhile, Dan Campbell is still searching for his first win as the Lions head coach.
NFL・1 DAY AGO
ClutchPoints

The Chicago Bulls dispatched the Orlando Magic on Friday night in what was, in most respects, a mundane affair. The Bulls raced out to a double-digit lead in the second quarter and never looked back as they won handily, 123-88. But the trip to Orlando was a homecoming for longtime...
NBA・6 HOURS AGO
CBS Denver

(CBS4) – The Colorado Avalanche are riding a 5-game win streak and coming off an exciting 7-5 win over the Ottawa Senators. That has placed positive notice back on the Avs, and at a time when the hockey team’s superstar is watching from the bleachers. Heading into the Thanksgiving week with a step ahead on the ice is always considered a notable measure of a team nearing the halfway mark of the NHL season. The CBS Sports pre-Thanksgiving NHL rankings boosted the Avs up three spots to put them at No. 10, as the league’s contenders come into focus. Alex Newhook of...
NHL・2 DAYS AGO
WGN News

CHICAGO – Dealing with unusual things is part of covering a team that is stuck in a major slump and maybe on the verge of some major changes. But a report that Matt Nagy might get fired after Thursday’s Thanksgiving Day game with the Lions has turned things up a notch the past 24 hours. […]
NFL・2 DAYS AGO

Pat Shurmer not available due to COVID-19 protocols vs. Eagles

The Denver Broncos will be without their offensive coordinator and play-caller this week as longtime NFL coach Pat Shurmur has been ruled out for Sunday’s week ten’s cross-conference matchup with the Philadelphia Eagles due to COVID-19 protocols, according to NFL Network’s Tom Pelissero. It is not yet revealed if Shurmur...
NFL・14 DAYS AGO
670 The Score

The Pittsburgh Penguins got Sidney Crosby back for Sunday's game against the Washington Capitals. Crosby is occupying his usual spot on the Penguins' top line between Jake Guentzel and Bryan Rust. Earlier Sunday, Pittsburgh activated the captain from the NHL's COVID-19 protocol list along with defensemen Brian Dumoulin, Chad Ruhwedel,...
NHL・12 DAYS AGO

ENGLEWOOD, Colo. -- Denver Broncos offensive coordinator Pat Shurmur is expected to miss Sunday's game against the Philadelphia Eagles because of COVID-19 protocols. Shurmur, who calls plays for the offense, was not on the field for Friday's practice. Quarterback Drew Lock went to the COVID reserve list Saturday following a positive test after the team had arrived in Dallas for last weekend's game.
NFL・14 DAYS AGO
8 News Now

Marchessault out for tonight’s Knights game due to Covid protocol

Vegas Golden Knights forward Jonathan Marchessault will not be playing tonight according to the team.
NHL・10 DAYS AGO
Fox17

Larkin removed from Wings game due to COVID protocols

(WXYZ) — The Detroit Red Wings announced following Tuesday night's game that Dylan Larkin was removed from the game as part of the COVID-19 protocols. No other information was released. Larkin scored one of the Wings' goals in the 5-2 loss to the Dallas Stars.
NHL・10 DAYS AGO
WTAJ

(AP) — The NFL is requiring players and staff to wear masks inside team facilities regardless of vaccination status for a week starting on Thanksgiving, and they must be tested twice for COVID-19 after the holiday. The league’s protocols were updated as a result of increasing rates of COVID-19 across the country. Green Bay Packers […]
NFL・9 DAYS AGO

The Detroit Red Wings lost more than just on the ice on Tuesday night against the Dallas Stars. In addition to their 5-2 setback, they also lost captain Dylan Larkin, who was removed from the game in the 2nd period thanks to COVID-19 protocols. According to NHL protocols:. “A person...
NHL・10 DAYS AGO
theScore

Baltimore Ravens quarterback Lamar Jackson didn't practice Thursday due to a non-COVID-19-related illness, according to ESPN's Jamison Hensley. Jackson missed Wednesday's session after being sent home with an illness, though head coach John Harbaugh said it wasn't COVID-19. This is the fourth time an illness has sidelined the signal-caller this...
NFL・8 DAYS AGO
buffalonynews.net

New York Rangers forward Mika Zibanejad was placed in the NHL's COVID-19 protocol on Saturday. Zibanejad, who missed most of training camp last season after testing positive for COVID-19, was held out of practice on Saturday morning. Greg McKegg took his place in practice on a line with Chris Kreider...
NHL・6 DAYS AGO
WGN News

Blackhawks held settlement talks in early November after the investigation’s findings were released, meeting for about an hour.
CHICAGO, IL・3 DAYS AGO