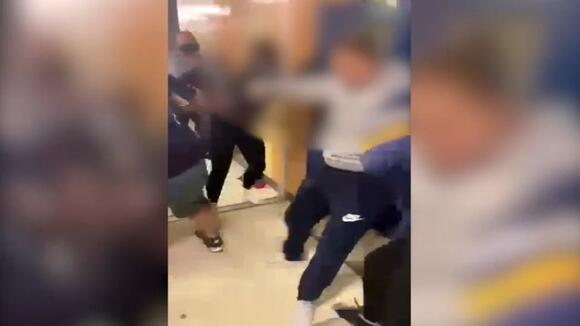 A disturbing video of a fight inside a Staten Island school is going viral. Police say it all started between a 13-year-old, and someone else outside the school, and poured into the hallways of Wagner High School. Now, the teenager is facing charges. Blood was smeared on the floor, and items were scattered. The 13-year-old punched another student several times in the head as school resource officers and teachers, along with other students tried to break it up. ALSO READ | 5 guns found on students in NYC schools in 24-hour period

Five guns were found on students in New York City schools in a 24-hour period.

"I knew one of the teachers, so I got really scared," said junior Olivia Lee. What was even more frightening is that detectives say the 13-year-old had a knife, and the rumors and fear circulated quickly in the school. "Everybody in the classroom saw the video, and we thought a teacher and student got stabbed," Lee said. Police say no one was stabbed, but the teen suspect suffered a bloody nose. The victim's injuries are unknown. This latest act of school violence is causing big concerns. A spokesperson with the Department of Education released a statement saying, "Violence of any kind has no place in our schools and School Safety Agents and school staff immediately worked to deescalate this situation and ensured no students were injured. We are working with NYPD regarding follow up actions and appropriate consequences will be addressed." Despite those words, students want more backup. "Metal detectors, more security to make sure students aren't fighting and it won't happen," said one student. Police say both the 13-year-old suspect and the victim were taken to the hospital, and that teen is now facing charges of assault and criminal possession of a weapon. ALSO READ | Don't fall for this latest bank scam

There is a consumer warning about a bank scheme that's fooling customers, costing them thousands of dollars in just seconds.

The school was not put on lockdown or evacuated during the incident. ---------- * More Staten Island news * Send us a news tip * Download the abc7NY app for breaking news alerts * Follow us on YouTube

I've been in fights like that but no one jumped in ,it was one on one, no guns,no knives, they really know why they fought!, ahh, the good old days!!💯🤔🙄🤣🤣

Young ppl along with everyone else needs Jesus daily so as not to serve Satan with all that anger & violence. He has power to deliver us from our evil natural instincts daily if we believe & practice His commandments.

This is all u got now wild kids…. Train a child in the way he/she should go and they will not depart from it….

Omar Bojang, the 18-year-old who was allegedly driving the scooter from which a gunman killed 11-year-old Kyahara Tay, surrendered Monday.
BRONX, NY・5 HOURS AGO
ABCNY

Police released the first photos of the man suspected of fatally shooting a man in an unprovoked attack on a Manhattan-bound subway train.
MANHATTAN, NY・5 HOURS AGO
ABCNY

Three females were killed in a crash near a catering hall on Long Island, as they left a Sweet 16 birthday party.
ACCIDENTS・10 HOURS AGO
ABCNY

A 20-year-old was shot in face and killed after meeting with alleged motorcycle sellers under the Deegan Expressway.
BRONX, NY・12 HOURS AGO

A 19-year-old man is in the hospital after being attacked by another man with a hatchet.
MANHATTAN, NY・5 HOURS AGO
ABCNY

A search was launched after 15-year-old Naz'ier Randolph, of Paterson, disappeared on Saturday afternoon while swimming with friends.
PATERSON, NJ・18 HOURS AGO
ABCNY

The manhunt is on for a gunman who shot a man in an unprovoked attacked on a Manhattan-bound subway train.
MANHATTAN, NY・1 DAY AGO
ABCNY

A man was stabbed to death by a suspect that broke into a second-floor apartment Sunday in Queens.
QUEENS, NY・1 DAY AGO

The incident at Pier Village in Long Branch, which authorities say quickly got out of hand, created a public safety emergency that resulted in a 9 p.m. curfew imposed by the city.
LONG BRANCH, NJ・10 HOURS AGO
ABCNY

Police say the alleged gunman was nabbed at a friend's house in the Bronx. He is charged with murder, manslaughter and two counts of criminal possession of a weapon.
BRONX, NY・2 DAYS AGO
ABCNY

The pain is piercing to know that her 11-year-old daughter, Kyhara was another victim of gun violence.
BRONX, NY・2 DAYS AGO

Police in Long Branch, New Jersey imposed a 9 p.m. curfew after a crowd got out of hand at Pier Village.
LONG BRANCH, NJ・2 DAYS AGO
ABCNY

Three people were killed and several others were injured in a crash near a catering hall on Long Island, according to police.
NEW HYDE PARK, NY・1 DAY AGO
ABCNY

In the most recent attack, a 51-year-old thought her life was over, but the thieves took her jewelry -- $7,000-worth before letting her go.
QUEENS, NY・3 DAYS AGO
ABCNY

Video shows the man throwing traffic cones at the vendors cart and yelling at him.
NEW YORK CITY, NY・2 DAYS AGO
ABCNY

Esperanza Rodriguez was selling fruit in the middle of Flushing Meadows Corona Park when she said her attacker came out of nowhere, knocked her down, ripped her fanny pack off and stole $200 of her hard-earned cash.
QUEENS, NY・4 DAYS AGO