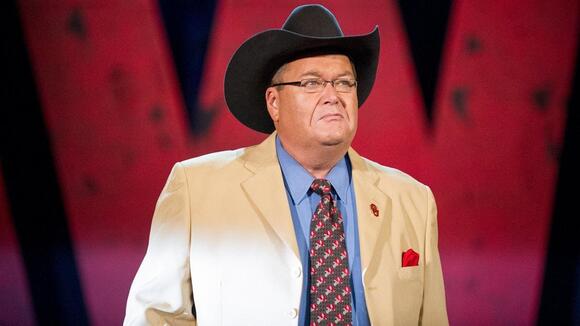 The longtime WWE and AEW announcer said that he is waiting to determine best treatment but is "ready to attack."

The 69-year-old Ross announced his diagnosis via Twitter, writing that he’s feeling great and ready to attack the disease. Ross added that he’s waiting on a radiologist study to determine the best treatment option, which will likely be radiation.

The longtime announcer said that he’ll still be on commentary for Saturday night’s episode of AEW Dynamite on TNT.

“On my way to Orlando for tonight’s @AEW Dynamite. Skin cancer confirmed. Waiting on radiologist study to determine best treatment. Likely radiation,” Ross tweeted. “Feeling great and ready to attack. Thanks for the support from so many.”

The diagnosis was made after Ross had a CT scan done on Thursday for an issue on his lower leg that he’s been dealing with for more than a year.

Known as “the voice of professional wrestling,” Ross has done commentary for WWE, WCW, AEW, NJPW, Mid-South Wrestling, and more. His iconic commentary duo with Jerry “The King” Lawler was a defining part of WWE’s Attitude Era and beyond.

Ross joined AEW as a commentator and senior advisor following the promotion’s launch in 2019. He’s part of the commentary team for Dynamite alongside Excalibur and Tony Schiavone.

WWE legend The Rock has sent out an encouraging message to Jim Ross, who announced Thursday that he was taking time off from AEW TV to undergo 22 radiation treatments. Stay strong, JR! U got this. No steak eaters. As we’ve noted, scores of wrestlers and wrestling personalities have been...
WWE・9 DAYS AGO
CinemaBlend

The wrestling world got a sad update recently when legendary commentator Jim Ross announced he’d be stepping away from pro wrestling for a bit due to treatment for his skin cancer. The treatments will pull him away from his duties calling matches for AEW, but he’s received lots of support from AEW CEO Tony Khan. Ross also received support from wrestlers from all around the business, including one of the most famous wrestlers of all: Dwayne “The Rock” Johnson.
COMBAT SPORTS・6 DAYS AGO
wrestlinginc.com

Freddie Prinze Jr. On What Ended His Relationship With Triple H

Former WWE writer, Freddie Prinze Jr. recently spoke with The Ariel Helwani Show about Jeff Hardy’s first push in WWE. He revealed that Vince McMahon personally greenlit the push to take place. “We were on the road to making Jeff champion, which some people were against,” he admitted. “It turned...
WWE・2 DAYS AGO

WWE SmackDown Superstar Jeff Hardy was reportedly sent home by officials this weekend. Hardy missed tonight’s WWE live event from the American Bank Center in Corpus Christi, Texas, and word going around is that he was sent home from the road, according to PWInsider. Hardy worked Saturday’s live event in...
WWE・8 HOURS AGO
survivornet.com

‘You Got This’: Cancer Cheerleader Dwayne ‘The Rock’ Johnson Supports WWE Colleague Jim Ross As He Gets Radiation for Skin Cancer

WWE announcer Jim Ross has skin cancer and is undergoing radiation to treat it. Ross’ former WWE colleague Dwayne “The Rock” Johnson sent the announcer support and love on Twitter; Johnson is famously tuned in to the cancer battles of fans around the globe and regularly sends messages of support and encouragement to cancer fighters.
WWE・6 DAYS AGO
411mania.com

Gamechanger Wrestling has announced that Ruckus will be the third inductee for the Indie Wrestling Hall of Fame. He joins Jerry Lynn and Homicide as part of the inaugural class. He will be inducted by Sonjay Dutt. Dutt wrote on Twitter: “Looking forward to honoring my friend, rival and someone...
WWE・13 DAYS AGO
411mania.com

PHOTO: Jim Ross Posts Photo Of His Back After Getting Skin Cancer Removed

WWE Hall of Famer and AEW commentator Jim Ross took to Twitter today, showing a photo of his recent surgery to have skin cancer removed from his back. Ross also confirmed that he’ll be appearing at tonight’s AEW Dynamite TV tapings in Chicago, IL. He said,. “GAME DAY IN CHICAGO...
WWE・11 DAYS AGO
411mania.com

During last night’s episode of AEW Dynamite, Jim Ross ended the broadcast by telling the fans he would see them “soon.”. Ross starts radiation treatment for his skin cancer on Monday. Dave Meltzer speculated on the latest Wrestling Observer Radio that Ross may have signed off the way he did because he’s not sure when he will be back to call Dynamite.
WWE・10 DAYS AGO
wrestlinginc.com

As we’ve noted, AEW announcer Jim Ross provided an update on his skin cancer treatment via Twitter on Thursday. Ross informed that he will undergo 22 radiation treatments starting Monday, which will force him to take time off from AEW TV until the end of the year. The likes of...
WWE・10 DAYS AGO
wrestlinginc.com

Jim Ross shared a post-cancer surgery photo while also hyping tonight’s AEW Dynamite at the Wintrust Arena in Chicago, Illinois. “GAME DAY IN CHICAGO FOR @AEWonTNT 9/8 CT This card is loaded!” Ross wrote. “The arena is SOLD OUT! Hope you join us! @AEW”. Earlier this month, Ross said he...
CHICAGO, IL・11 DAYS AGO

Viking Raiders vs Los Lotharios: The match begins while it seems that the two Mexicans can take home the victory, Boogs and Nakamura arrive to distract them, but they get the opposite effect because Humberto rolls up Erik and wins the match for his team. The Viking Raiders then come...
WWE・8 HOURS AGO
411mania.com

As we noted last night, Jim Ross is set to get 22 straight days of radiation treatment for his skin cancer starting Monday, and will have to miss weeks of AEW Dynamite. Several names in wrestling have reacted to the news on Twitter, including CM Punk and AEW President Tony Khan.
COMBAT SPORTS・9 DAYS AGO
ewrestlingnews.com

Dwayne “The Rock” Johnson took to Twitter yesterday, sending some best wishes to Jim Ross. As many of you know, the WWE Hall of Famer and AEW commentator will be undergoing radiation treatment for skin cancer. He will undergo the first of 22 treatments on Monday. The Rock said,. ”Stay...
CELEBRITIES・8 DAYS AGO
ewrestlingnews.com

AEW commentator Jim Ross has taken to his Twitter account to announce he will be temporarily stepping away from the commentary desk. Ross, who recently announced he is suffering from skin cancer, has made the decision so he can undergo radiation therapy. Posting on his Twitter account Ross confirmed the...
CELEBRITIES・10 DAYS AGO
f4wonline.com

On the new Wrestling Weekly, Les Thatcher and myself share some great old school stories about historic venues and territory fans cheering heels on the show. We also give some thoughts on the WON Hall-of-Fame and this past week's AEW Dynamite. Thanks for listening and have a great weekend~!
WWE・2 DAYS AGO
Sports Illustrated

From open to close, NXT’s WarGames was a show built entirely around the future. This was NXT’s first Sunday night special since airing its traditional TakeOver event in August. It followed the NXT 2.0 blueprint of taking steps to develop its next collection of stars, particularly with Bron Breakker and Cora Jade.
NFL・6 HOURS AGO
UPI News