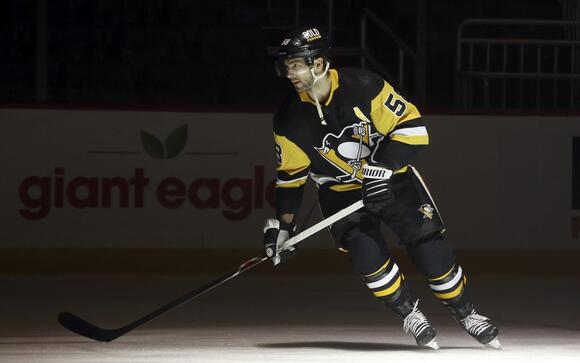 That is defenseman Kris Letang.

Letang received an initial positive test, but as part of protocol the team is working to completely verify the status.

According to head coach Mike Sullivan, Letang received an initial positive test and will be forced to miss Saturday night’s game against the Toronto Maple Leafs.

To fill in the open space on the NHL roster, Sullivan believes there will be a call up from the Wilkes-Barre/Scranton Penguins.

Golden Knights forward Michael Amadio was placed in the NHL’s COVID-19 protocol Wednesday, and the team canceled media availability after its optional skate at City National Arena. Amadio is the third player to enter COVID protocol this week, joining William Carrier and Jonathan Marchessault. The Knights are scheduled to face...
NHL・10 DAYS AGO
Yardbarker

It seemed like a pretty comical moment towards the end of the New York Rangers 5-2 win over the Boston Bruins. Artemi Panarin and Bruins super-pest Brad Marchand were jawing at each other. The confrontation ended with Panarin throwing his glove at Marchand. ABC commentator, AJ Mleczko was in between the benches when the altercation took place. “I don’t mean to laugh,” she said. “It is heated and intense.”
NHL・20 HOURS AGO
93.7 The Fan

Rudolph says he’s ready, not sure if Ben will be

Mason Rudolph is preparing to be the starter, much like he did before the game at Cincinnati last year only to have Ben go. He’s ready for another chance to prove himself
NFL・9 DAYS AGO
prohockeyrumors.com

Nikita Zaitsev Back In COVID Protocol

Less than 12 hours after being removed from the COVID protocol, Ottawa Senators defenseman Nikita Zaitsev was added back to it just before tonight’s game against the Pittsburgh Penguins. In his place, Jacob Bernard-Docker, recalled earlier today, is making his season debut. Amazingly, the Senators have almost completely exhausted their...
NHL・13 DAYS AGO

It looks like the Vegas Golden Knights are having a bit of a COVID outbreak. Announced today, Golden Knight’s leading goal scorer Jonathan Marchessault has been placed in COVID protocol. As a result, the Golden Knights have recalled Paul Cotter and Sven Baertschi from the Henderson Silver Knights of the AHL.
NHL・11 DAYS AGO
93.7 The Fan

Penguins need to pick up the pace

The Penguins are just 14 games into an 82-game season but seeing as – after tonight – 9 of the next 11 games are on the road there is a certain sense of urgency going into tonight’s game against Buffalo at PPG Paints Arena.
NHL・10 DAYS AGO
93.7 The Fan

Despite not being able to beat the 32-year-old journeyman goalie, Penguins players left PPG Paints Arena perhaps feeling a bit better than they did going into the game.
NHL・10 DAYS AGO
KDWN

Bad news for tonight’s VGK game against Carolina. Why bother telling you when we can let the team do it?. Coming up from the Henderson Silver Knights are…. In other news, if you’re going, Knight time is at 6:30, and the key color in your wardrobe should be…
NHL・11 DAYS AGO

The NFL is requiring players and staff to wear masks inside team facilities regardless of vaccination status for a week starting on Thanksgiving, and they must be tested twice for COVID-19 after the holiday. The league’s protocols were updated as a result of increasing rates of COVID-19 across the country....
NFL・10 DAYS AGO
WKBW-TV

EAST RUTHERFORD, N.J. (WKBW) — The Buffalo Bills will be without another important member of the defense for Sunday's game against the New York Jets. The Bills announced on Sunday that defensive tackle Star Lotulelei has been placed in COVID-19/Reserve Protocol. Lotulelei was the only member of the Bills to...
NFL・13 DAYS AGO
93.7 The Fan

While no i’s have been dotted and no t’s have been crossed, it does appear that a sale of the Pittsburgh Penguins franchise may be imminent.
NHL・10 DAYS AGO
93.7 The Fan

According to a report out of the Wall Street Journal, the Pittsburgh Penguins may be sold to the holding company that owns the Boston Red Sox.
PITTSBURGH, PA・10 DAYS AGO

Three more Islanders players were placed in COVID-19 protocol on Saturday, bringing to five the number of regulars the team has lost to the illness and six overall who have tested positive. The sobering news contrasted with the elation that opening the $1.1 billion UBS Arena has brought to the...
NHL・6 DAYS AGO
93.7 The Fan

Big Ben rumored to have tested negative, needs another test Saturday to play

On the Friday afternoon before their Sunday Night Football bout in Los Angeles, the Pittsburgh Steelers announced who is in or out for the game. While wide receiver Chase Claypool will be back in the lineup
NFL・7 DAYS AGO
93.7 The Fan

Colony now knows what a 'thirst trap' is

Talking about the potential sale of the Pittsburgh Penguins to a group based in Boston, Post-Gazette Penguins beat writer Mike DeFebo was quelling any concerns fans have of the organization being moved.
NHL・9 DAYS AGO
93.7 The Fan

It took a few games with a mostly healthy lineup, but it looks like the Pittsburgh Penguins have found their footing. The Penguins’, and goalie Tristan Jarry’s,
NHL・6 DAYS AGO
93.7 The Fan

Freiermuth bounce back from fumble Sunday

It called it the first major hiccup of his career and now Pat Freiermuth is reflecting and moving on from the fumble Sunday, plus thoughts on Mason and OT
NFL・9 DAYS AGO
93.7 The Fan

The New York Islanders’ UBS Arena wasn’t having a Black Friday sale on goals, but the Pittsburgh Penguins managed to collect another victory on Long Island. The Penguins win 1-0 over the Islanders
NHL・5 HOURS AGO
93.7 The Fan