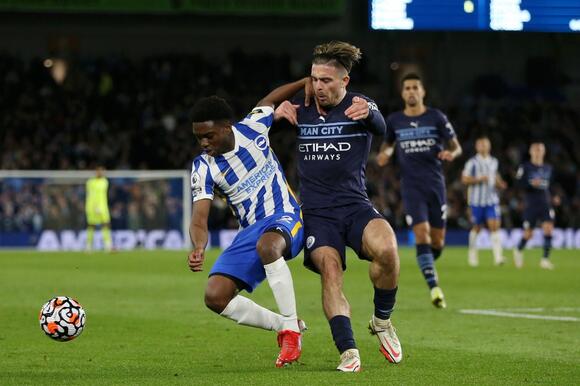 Brighton host Manchester City on Saturday evening in the Premier League , a meeting of two clubs in the top four - one rather more surprising than the other at this stage. The Seagulls have impressed and lost just once so far in the league, though face a big task to keep the reigning champions at bay. Pep Guardiola’s outfit are third, just above their hosts, and have the top flight’s joint-best defensive record at this stage.

City were in action in midweek in the Champions League and produced what the manager termed one of their best European performances of his tenure , thrashing Club Brugge and scoring five goals in the process . Prior to that it was an easy win over Burnley in the league last week, making it seven unbeaten in that competition since the opening day of the campaign.

The two managers did clash last season, but Graham Potter says he apologised and doesn’t expect it to be a factor when they meet again, hoping for a “cuddle” from his opposite number . Follow all the live updates and action as Brighton host Manchester City below:

Clockwatch: Chelsea, Man City and Liverpool all won to keep the pressure on each other at the top of the table, while Everton fans are increasingly mutinous
PREMIER LEAGUE・4 DAYS AGO
The Independent

Manchester City host Everton this weekend with the two teams in contrasting form before the international break.Pep Guardiola’s team are second in the Premier League table after their all-too-comfortable win in the local derby against United, while the Toffees are down in 11th after going five without a win.Both sides are without a number of players to injuries, suspensions and other absences, but the expectation will be on City’s greater squad depth to still see them earn a positive result.LIVE: Follow live coverage of Man City vs EvertonRafael Benitez’s team have only won once away from home in the league this...
PREMIER LEAGUE・14 DAYS AGO
The Guardian

Pep Guardiola’s men came back strong against Club Brugge and Manchester United before the international break, with the Citizens making a mockery of their cross-town rivals in a 2-0 victory courtesy of an all-round effort from the whole team. As we return from yet another dreadful international break, all the...
PREMIER LEAGUE・14 DAYS AGO

Leeds United travel south to face Brighton at the Amex on Saturday evening, aiming to pick up a much-needed victory. Marcelo Bielsa's men currently sit just one place above the dreaded drop zone, having won just twice all season. Their form had looked to be improving in the weeks leading up to the international break, although they've only found victory once in their last five Premier League outings - coming away at lowly Norwich - and most recently gave up a 1-0 half-time lead to lose at Tottenham, leaving them just two points clear of Burnley in 18th.
PREMIER LEAGUE・10 DAYS AGO
CityXtra

Pep Guardiola’s men put up a dominant display against Paris Saint-Germain in the Champions League. A Raheem Sterling finish from close range and a brilliant Gabriel Jesus tap in helped the Citizens secure the top spot in Group A via a 2-1 victory. The defending champions head back to Premier...
PREMIER LEAGUE・8 DAYS AGO
90min.com

A buoyant Aston Villa welcome Manchester City to Villa Park in the Premier League as they look to continue their unbeaten start to life under Steven Gerrard. The former Rangers boss has overseen consecutive victories since arriving in the Midlands, pulling Villa seven points clear of the relegation zone after an alarming slide down the table under his predecessor Dean Smith.
PREMIER LEAGUE・5 DAYS AGO
CBS Sports

Ralf Rangnick has spoke about his appointment as Manchester United interim manager and his plans for the team. Join Dave Tindall now
PREMIER LEAGUE・3 DAYS AGO
SB Nation

A frantic start and a spirited second half; more encouraging signs under Steven Gerrard?. Super Ollie Watkins! How brilliant was he and could we have had a couple more goals?. Should we see Douglas Luiz remain in a more advanced midfield role?. Emi delight and Bailey frustrations; what can we...
PREMIER LEAGUE・2 DAYS AGO
The Guardian

Manchester City enjoyed a near-perfect evening on Saturday with a 3-1 win which sent the champions back to the top of the league, yet Jack Grealish could be forgiven for leaving Vicarage Road in a huff.Grealish was deployed in an unfamiliar false nine role and he was heavily involved in much of City’s attacking play, linking with the carousel of skilful technicians Pep Guardiola had picked. On the ball he was determined and persistent and was perhaps a little unlucky not to score, thwarted by an excellent Daniel Bachmann save in the first half and the crossbar in the second....
PREMIER LEAGUE・1 HOUR AGO

Is Aston Villa vs Man City on TV tonight? Kick-off time and how to watch Premier League fixture

Aston Villa host Manchester City in the Premier League on Wednesday amid the home team’s fine start under new coach Steven Gerrard.Gerrard, who was appointed in November, has overseen victories over Brighton and Crystal Palace, but defending champions Man City pose an entirely different challenge.Pep Guardiola’s side entered the gameweek one point behind leaders Chelsea, having beaten West Ham 2-1 at the weekend.Here’s all you need to know about Villa vs Man City.When is it?The match will kick-off at 8.15pm on Wednesday 1 December at Villa Park.How can I watch?The fixture will be shown on Amazon Prime, with coverage...
PREMIER LEAGUE・4 DAYS AGO
San Diego Union-Tribune

Ralf Rangnick has started his tenure as Manchester United manager with a 1-0 win over Crystal Palace in the Premier League thanks to a rare goal from Fred at Old Trafford
SAN DIEGO, CA・17 HOURS AGO
The Guardian

Who took over? Who walked away? Who kept going?
WORLD・2 DAYS AGO
The Independent

Ralf Rangnick has admitted that he “couldn’t possibly turn down” the role of Manchester United’s interim manager, even if he is only in charge until the end of the 2021/22 campaign. “We are talking about six and a half months, so we have only played one third of the games...
PREMIER LEAGUE・2 DAYS AGO