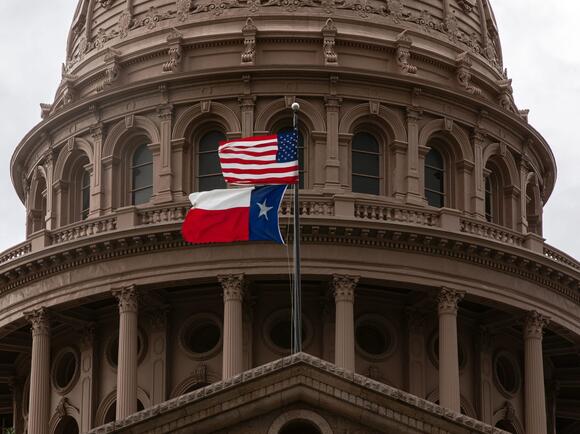 Texas Gov. Greg Abbott on Thursday appointed a secretary of state who briefly worked with former President Donald Trump to challenge the 2020 election results in Pennsylvania.

The new secretary of state, John Scott, will manage elections in the Lone Star State at a time when the state has been in the national spotlight over its restrictive election law that was implemented after Trump's 2020 election loss.

The appointment also comes as Trump has pushed for an audit of the Texas presidential results, despite the former president winning the state by nearly 6 points last year, along with GOP legislators proposing a controversial redistricting proposal that voting rights advocates contend would dilute the electoral strength of the state's burgeoning minority population.

Scott, a Fort Worth attorney who was employed by Abbott when the Republican governor was the Texas attorney general, will lead a limited review of the 2020 election results in populous Collin, Dallas, Harris, and Tarrant counties. Of the three counties, Trump won Collin, while Biden won the three latter jurisdictions.

"John understands the importance of protecting the integrity of our elections and building the Texas brand on an international stage," Abbott said in a statement announcing the appointment. "I am confident that John's experience and expertise will enhance his oversight and leadership over the biggest and most thorough election audit in the country."

Scott will serve in the role on an interim basis, as his appointment will require confirmation by the state Senate for final approval.

The legislature is currently not scheduled to meet again until 2023.

Rose Clouston, the voter protection director for the Texas Democratic Party, criticized Scott for his involvement with GOP efforts to challenge the 2020 election.

"Texans deserve a chief election official who has a career dedicated to the protection of the right to vote and not one who participated in Trump's lawsuits undercutting our democracy," she said in a statement.

Stephanie Gómez, the associate director of Common Cause Texas, an open government organization, blasted Scott as "unsuitable" for the role.

"Not only did Gov. Greg Abbott appoint someone who worked to undermine our 2020 election for partisan interests, he literally waited until Texas legislators left town to avoid the confirmation process until 2023," she told Spectrum News . "The timing of this announcement is clearly intended to subvert our democratic process in a way that allows Greg Abbott's completely unsuitable nominee to oversee our 2022 elections without having to face confirmation hearings."

Scott was among the attorneys who represented Trump as it sought to contest the presidential election results in Pennsylvania, a swing state that Biden won by nearly 81,000 votes out of 6.9 million ballots cast.

However, Scott withdrew from the case , along with Texas state Sen. Bryan Hughes, a day before the hearing last November. The election case was eventually dismissed in court.

Scott also represented Texas in litigation regarding the state's voter identification law in 2014.

Hughes was the lead sponsor of the state's restrictive voting law that was signed into law last month after fierce opposition from Democratic legislators - which led them to briefly flee the state for Washington, DC, to call attention to Texas and to highlight federal voting-rights legislation that has languished in Congress for months due to GOP resistance in the US Senate.

This article is part of the The DC Brief, TIME’s politics newsletter. Sign up here to get stories like this sent to your inbox every weekday. It’s not hyperbole to say Joe Biden’s childhood home state of Pennsylvania put him in the White House. It was The Associated Press’ call of that state’s outcome at 11:25 a.m. on Saturday, Nov. 7, of last year that made it official that the son of Scranton would be heading back to Washington and into a job he’s coveted since his 20s. The counting in Pennsylvania took four days and it was closer than anyone in the Biden campaign wanted. But the Keystone State came through for Biden, who had early on recognized the state as a lynchpin for his strategy and even headquartered his campaign near Philadelphia’s City Hall. (Well, at least until COVID-19 mothballed that operation and sent everyone working from kitchen stools and basement couches.)
PENNSYLVANIA STATE・21 HOURS AGO
Business Insider

Jena Griswold told The Washington Post that there was a concerted campaign to place Trump allies in roles overseeing elections.
COLORADO STATE・1 DAY AGO
WashingtonExaminer

Georgia secretary of state speaks to Jan. 6 committee about call with Trump

Georgia Secretary of State Brad Raffensperger spoke to the House committee investigating the Capitol riot about a Jan. 2 call between himself and Donald Trump in which the former president encouraged him to "find" votes sufficient to sway the Georgia election in his favor.
GEORGIA STATE・12 HOURS AGO
Vanity Fair

Ahead of his likely reelection run in 2024, Donald Trump is building an infrastructure for insurrection. The “fraud” cries on social media, the desperate begging of administrators to “find” votes for him, the blustery calls for his supporters to “fight” for him—all that may be so last year. Now, he and his allies are trying to lay the foundation to allow him to undermine democracy without resorting to such overt measures.
PRESIDENTIAL ELECTION・1 DAY AGO

Former president Donald Trump’s efforts to overturn the 2020 election are evolving into a movement that may be a more potent threat to democracy: one that places his supporters in elected roles with oversight of elections at the local and state levels. That would give him and his allies more say over who wins elections.
PRESIDENTIAL ELECTION・5 HOURS AGO
WGAU

A City Councilman who lost his seat in Comer gets a court hearing in Danielsville: Eddie West is alleging election fraud after last month’s loss to challenger Michael Wilder. He will make his claim in Madison County Superior Court. West lost in his November 2 bid for reelection by a vote of 50 to 29.
MADISON COUNTY, GA・6 HOURS AGO
Newsweek

"It will be a ratings bonanza for television," said the former president in a statement.
PRESIDENTIAL ELECTION・2 DAYS AGO
POLITICO

‘They’re all begging me’: Trump’s 2024 veep tryouts get underway

The question of Trump’s prospective choice of running mate is surfacing with increasing frequency.
PRESIDENTIAL ELECTION・2 DAYS AGO

Former President Donald Trump said he'll win the GOP nomination "very easily" if he were to run in the 2024 election. "Most people have said if I run, they won't run against me so I think that's good," Trump said. An October poll found strong support among Republicans for a...
PRESIDENTIAL ELECTION・3 DAYS AGO
Washington Post

NEW YORK — A supporter of former president Donald Trump was sentenced to 19 months in prison for threatening to “slaughter” members of Congress days after the Jan. 6 breach of the U.S. Capitol — a threat that tested the limits of free speech in an era of contentious political division.
8 DAYS AGO
benitolink.com

AUSTIN — Writing in the Houston Chronicle yesterday, Texas Secretary of State John Scott explained the need for the full forensic audit of the 2020 General Election currently underway, highlighting that the ultimate goal of the audit is to restore Texas voters’ trust in our state’s election systems. The column comes after Governor Abbott and state legislative leadership approved $4 million for the creation of a permanent Election Audit Division within the Texas Secretary of State’s office to complete the ongoing full forensic audit of the 2020 General Election and subsequent audits required by Senate Bill 1.
TEXAS STATE・8 DAYS AGO
Houston Chronicle

Regarding “Opinion: Full forensic audit will restore faith in Texas elections,” (Nov. 21): Secretary of State John Scott's op-ed regarding the Texas 2020 election audit can be easily summed up in a word: Kabuki. Millions of dollars are going to be spent to try to find fraudulent voting from sources unfriendly to former President Trump. Scott would have served the public better had he explained how to file a protest for a particular vote. The last major election where 'every vote counts' was an issue was the 2000 presidential election, when President Bush was declared the winner of the electoral votes from Florida after much dispute. In most elections, the results are basically preordained due to gerrymandering, so election fraud is really a bogeyman hiding in the conspiracy theory of the losers.
PRESIDENTIAL ELECTION・8 DAYS AGO
roselawgroupreporter.com

IN DEPTH: Trump supporters focus on ‘issues’ with election, not the final result, as Arizona ballot review falls flat

II remains to be seen how long baseless concerns about vote counts will continue to undermine the election process. Reporters from international news outlets flew in to Phoenix to watch from a makeshift press box as volunteers unpacked, inspected and repacked boxes of Maricopa County’s ballots inside Veterans Memorial Coliseum.
ARIZONA STATE・9 DAYS AGO
Reuters

Lawyer who tried to overturn Trump's 2020 loss appointed to a U.S. election board

Nov 19 (Reuters) - In January, lawyer Cleta Mitchell joined a phone call with then-President Donald Trump as he pressured Georgia's top election official to "find" enough votes to overturn his defeat in the state, playing an important role in Trump's attempts to subvert the 2020 results. Nearly a year...
PRESIDENTIAL ELECTION・11 DAYS AGO

AUSTIN, Texas (KAMR/KCIT) — Officials with the office of Texas Gov. Greg Abbott announced Friday that Abbott approved a Legislative Budget Board proposal, ultimately funding a new Election Audit Division for the Texas Secretary of State’s office. According to a news release from the office, Abbott requested $4 million for the new division, which aims […]
TEXAS STATE・11 DAYS AGO
Las Vegas Herald

As COVID-19 swept the country in March 2020, Wisconsin's Democratic Gov. "I was given a cardboard box with a roll of paper towels, six pairs of rubber gloves, a couple of bottles of what looked like Everclear [grain alcohol], and a roll of painter's tape." What ensued became a national...
WISCONSIN STATE・11 DAYS AGO
Tennessee Lookout

Secretary of State Tre Hargett confirmed this week he is supporting a move to audit Tennessee’s elections, but maybe not for the 2020 count, which has been much-maligned by Republicans nationally. In an abbreviated interview Wednesday with the Tennessee Lookout, Hargett said an audit bill will be forthcoming in the 2022 legislative session. Hargett referred […] The post Stockard on the Stump: Secretary of State backs future election audits appeared first on Tennessee Lookout.
POLITICS・12 DAYS AGO
Newsweek

Trump, who threatened to withhold endorsements from Congressional Republicans, called McConnell a "fool" who should have resigned a "long time ago."
PRESIDENTIAL ELECTION・13 DAYS AGO