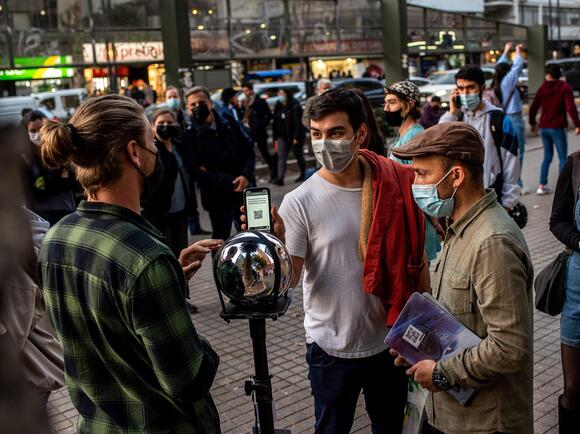 The team behind a new cryptocurrency is aiming to fast-track mass digital-asset adoption - and to achieve this, they want to scan people's iris. One billion by 2023 to be exact.

Worldcoin, which came out of stealth this past week, will give its cryptocurrency to each person who signs up. So far, it has scanned more than 100,000 people from around the world through a new device called the Orb. The coin will go live in the first quarter of 2022.

The spherical, silver hardware - about the size of a basketball - captures an image of a person's eyes to determine whether the person is real and whether that person has already signed up in the past.

The new digital asset - founded by the former head of Y Combinator Sam Altman, along with Alex Blania and Max Novendstern - has raised $25 million to date and is currently valued at $1 billion.

"We try to get crypto to mass adoption really, really quickly, and we have a very clear answer how to get there," Blania told Insider. "And it seems to work really well."

The team chose to scan the iris because it contains far more information than, for instance, a fingerprint, Blania explained. An age limit of 16 or 18 applies depending on the jurisdiction. Currently, there are over 30 Orbs in 12 countries across four continents.

Once the iris is scanned, a unique code can be used for claiming free digital tokens, which will be distributed via a wallet app generated by the Orb.

The team plans to ramp up production to distribute over 4,000 Orbs per month or 50,000 per year. The team licenses the Orbs, which were designed by former Apple employee Thomas Meyerhoffer, to contractors across the globe who go through rigorous interviews and verifications.

Each Orb, according to Blania, is operating "at capacity." The team has yet to deploy Orbs in the US, citing regulatory uncertainty on digital assets.

And contrary to first impressions, he insisted the company won't get anything in return for an iris scan, he said. Once the Orb scans both eyes, it will convert the iris image into a numeric code, which will then be deleted to protect the person's privacy.

Traders who want to buy the crypto when it launches on the ethereum blockchain can do so even without having their iris scanned, Blania said. They will just not get their free share of the currency.

How much people will receive is still undecided. But the amount will range from $20 to $100, depending on when they sign up, Blania told Insider. "The earlier they come, the more they will receive."

Worldcoin plans to have a fixed supply of 10 billion tokens, with 80% allocated to users, 10% to investors, and 10% to manufacturers, operators, and developers of the Orbs and the network.

"The numbers we see, and the excitement we see off the users we work with and we verify [are] extremely exciting," Blania said.

How do I bank my crypto so I can spend it? Here are the benefits and barriers of some new services for digital currency.

There are new services on the horizon that could help people use bitcoin and other digital coins in more mainstream ways for their day-to-day finances.
MIAMI, FL・19 HOURS AGO
Markets Insider

The metaverse is a massive opportunity for crypto that calls for new platforms and tokens, Bank of America strategist says

The cryptocurrency exchange backed by Peter Thiel and Richard Li began operating for a batch of institutional investors on Tuesday. The start for institutional investors is only the first step before the full launch for private investors and traders. The Bullish Exchange will offer Bitcoin, Ether and EOS tokens for...
MARKETS・14 HOURS AGO
The Motley Fool

Missed Out On Shiba Inu? Buy This Breakout Cryptocurrency Instead

Shiba Inu has fallen nearly 50% from its high. The Avalanche blockchain is the fourth-largest decentralized finance (DeFi) ecosystem. Avalanche is the fastest blockchain-powered smart contract platform. Shiba Inu (CRYPTO:SHIB) skyrocketed to an all-time high in October, rising more than 153,000,000% from its 52-week low on Nov. 28, 2020. However,...
STOCKS・1 DAY AGO

Brazilian digital banking platform Nu to offer 289.2 million shares in IPO, priced at $8 to $9 each

Brazilian digital banking platform Nu Holdings Ltd. set terms for its initial public offering on Tuesday, with plans to offer 289.2 million Class A shares, priced at $8 to $9 each. The company is also planning to list Class A shares in the form of Brazilian depositary receipts in Brazil, with each BDR representing 1/6(th) of a Class A ordinary share. The company has applied to list on the New York Stock Exchange, under the ticker 'NU.' Morgan Stanley, Goldman Sachs, Citigroup and Nu Invest Corretora de Valores SA are lead underwriters in a syndicate of 13 banks on the deal. Proceeds will be used for general corporate purposes. The company had a loss of $99.1 million in the nine months through Sept. 30, wider than the loss of $64.4 million posted in the year-earlier period. Revenue roughly doubled to $1.062 billion from $534.6 billion. The Renaissance IPO ETF has gained 0.5% in the year to date, while the S&P 500 has gained 24%.
MARKETS・11 HOURS AGO
The Motley Fool

Institutional investors currently own 7.7% of circulating Bitcoin. Cathie Wood think institutional investors will allocate more money to Bitcoin in the future. Cathie Wood believes the price of Bitcoin could reach $500,000 by 2026. In September, the SkyBridge Alternatives (SALT) Conference took place in New York, where many Wall Street...
STOCKS・17 HOURS AGO
Markets Insider

David Marcus, a top executive at Meta Platforms (NASDAQ:FB) and the co-creator of the company's Diem digital currency, is leaving the company, Bloomberg reports. Marcus, who joined the company in 2014 from PayPal (NASDAQ:PYPL), had been the top exec overseeing Facebook (FB) Messenger and moved over to a project working on blockchain initiatives in 2018.
BUSINESS・10 HOURS AGO

Shiba inu soars more than 20% after the crypto exchange Kraken's listing, while a SHIB whale scoops up $1 million in tokens

The Bitcoin (CRYPTO: BTC) network is on track to settle $45 trillion in 2021 alone, according to a report from Ark Invest. What Happened: Yassine Elmandjra, a crypto analyst at Ark Invest, shared a graph depicting Bitcoin’s transaction volume over the last year and revealed that its annual settlement volumes are now four times higher than global payments giant Visa Inc (NYSE:V).
MARKETS・14 HOURS AGO
cryptopotato.com

Digital Currency Group and its subsidiaries, including Grayscale Investments, have decided to move from New York City to Connecticut. Digital Currency Group (DCG) is moving to Connecticut, and with this relocation, the company aims to generate over 300 jobs over the next five years. Barry Silbert cited the proximity to major metropolitan areas, infrastructure, talent, business-friendly environment, and facilities as the reasons behind the move.
CONNECTICUT STATE・7 HOURS AGO
Markets Insider

Grayscale launches solana trust as the ethereum competitor rides an over 10,000% gain in 2021

The Grayscale Solana Trust is available to individual and institutional investors with an investment minimum of $25,000 and an annual fee of 2.5%.
MARKETS・11 HOURS AGO

The largest gains for tokens like Shiba Inu and Dogecoin might already be behind them. Square offers investors a high-quality payments business that also provides plenty of exposure to Bitcoin. Fiserv has over 1.4 billion accounts on file, giving it unmatched scale in the financial services industry. Cryptocurrencies have been...
STOCKS・14 HOURS AGO
MarketWatch

David Marcus, a top executive at Facebook parent Meta Platforms Inc. who helped develop the forthcoming Diem digital currency, is leaving the company to pursue other projects. A former PayPal Holdings Inc. executive who joined Facebook in 2014, Marcus oversaw the Messenger service before sliding over to form the company's blockchain division in 2018. Marcus built Novi, the company's digital wallet that debuted in October, and co-created Diem, formerly known as Libra. The technology allows people to send money cross-border.
MARKETS・10 HOURS AGO
The Motley Fool

Many cryptocurrencies already have huge market caps. Cardano has many uses beyond a digital currency. Cryptocurrency continues to fascinate investors, and developers keep coming up with new forms of cryptocurrency as well as new uses for tokens and their platforms. As investors pour money into what they hope will be a profitable investment, the total value of cryptocurrencies has skyrocketed, with Bitcoin alone having a market cap of more than $1 trillion. Consider that only five publicly trade U.S. companies have attained that status: Apple, Tesla, Amazon, Microsoft, and Alphabet.
RETAIL・1 DAY AGO
itechpost.com

Ethereum Killers List: 3 Cryptos to Invest In Aside From ETH

Although Ethereum rose by 500 percent since the start of the year, three other cryptocurrencies outperformed it in the market with over 5,000 percent gains. Traders might want to invest in these cryptocurrencies before the year ends. Standing behind Bitcoin, Ethereum is the second biggest cryptocurrency by market capitalization. It...
COMMODITIES & FUTURE・1 DAY AGO
dailyhodl.com

Bitcoin bull Tim Draper is naming two altcoins in the crypto markets that he’s keeping an eye on due to their strong fundamentals and unique use cases. In a new interview on Bloomberg Markets, the billionaire venture capitalist says that open-source programmable blockchain Tezos (XTZ) has the things that he wants to see in a crypto project.
STOCKS・1 DAY AGO
GOBankingRates

Is Crypto a Sinking Ship? Money Experts Weigh In

The exciting and volatile rise of Bitcoin was the investment story of the previous decade. While cryptocurrency has made clear that it's no passing fad, no one knows for sure whether it will ever...
MARKETS・1 DAY AGO
decrypt.co

Israeli citizens now have to worry about having their identities stolen. Image: Shutterstock. Israel is advancing its research into a possible central bank digital currency (CBDC), the country’s central bank governor said today. But Israel is still not 100% sure it will release a CBDC. Israel is fast-tracking its research...
WORLD・1 DAY AGO
Markets Insider

Former bankers - including one who quit Goldman Sachs to play Axie Infinity - are reportedly launching a $1.5 billion crypto fund

A former Citigroup executive is launching a $1.5 billion crypto fund and bringing on former Goldman Sachs banker Sam Peurifoy, who quit his job previously to make money in play-to-earn games, Bloomberg reported. Matt Zhang, who was most recently a global co-head of structured products trading at Citigroup, is launching...
MARKETS・1 DAY AGO