The 30 greatest album covers of all time, from David Bowie, ‘Aladdin Sane’ to Patti Smith, ‘Horses’ 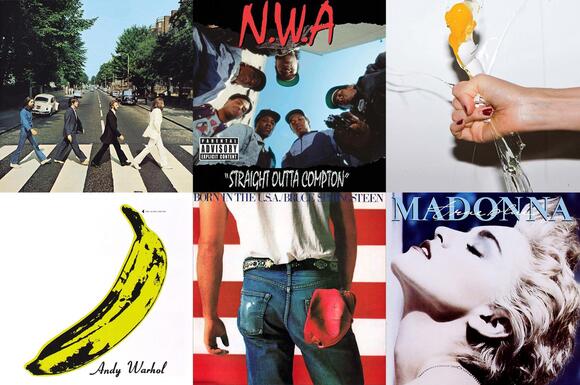 What makes an album stand the test of time? Mostly it’s the music – songs that resonate with the listener long after the final note has played out. But it also has something to do with the art that accompanies it – whether that’s a photograph, a painting, a collage or something else altogether.

The album cover is arguably less valued than it once was. Moody solo shots or images of bands slouching against brick walls have become the norm (thanks Ramones), or else artists go for plain covers with their name in block letters, in the belief that simple is best. But over the decades, artists famous in their own right have created genuine works of art that just happen to grace the covers of albums.

Photographers have succeeded in capturing the true essence of the artist via a striking portrait shot, like Robert Mapplethorpe with Patti Smith, or Pennie Smith and The Clash. Elsewhere, artists like Andy Warhol and Peter Blake have added their own vision to bands like the Velvet Underground , The Rolling Stones and The Beatles. They in turn are emulated by the likes of Madonna and photographer Herb Ritts, to mirror the connection between art and brand.

Here are 30 of the most iconic album covers of all time:

So, The Beatles are the greatest band of all time, right? Not if you ask Paul McCartney. Sir Paul himself feels that The Everly Brothers deserve the honor. British newspaper the Daily Mail reports that, according to a passage in his new book ﻿The Lyrics, the former Beatle says he and band mate John Lennon were plenty inspired by the pioneering American rock ‘n’ roll duo.
MUSIC・28 DAYS AGO
iheart.com

Last weekend, Julian Lennon and his brother Sean attended a screening of The Beatles: Get Back documentary, followed by a special event hosted by Paul McCartney's wife Stella. After the festivities, Julian took to Instagram to share his amazement about the film and divulge that it made him feel even closer to his dad, the late John Lennon.
MOVIES・12 DAYS AGO
Rolling Stone

When David Bowie died on Jan. 10, 2016, the tragedy was alleviated to a degree because he’d just released one of his greatest records. Blackstar, which came out just two days before — on Bowie’s birthday — was a glimpse into the genius mind of an artist who knew his days are numbered. Solemn, deliciously jarring, and endlessly surprising, the album put a period on a life rife with innovation, imagination, and an innate inability to stagnate. If Blackstar was the brilliant ending chapter in Bowie’s story, then the new release of Bowie’s famous “lost album,” 2000’s Toy, is a kind...
MUSIC・13 DAYS AGO
NME

It’s hard to imagine now that there was ever a time when people might mock David Bowie, but mock they did. Since he sadly left us in 2016, he’s gained somewhat of a saintly reputation – but people have not always been so kind. A new box set, ‘Brilliant Adventure’,...
CELEBRITIES・7 DAYS AGO

NHC, the supergroup featuring Foo Fighters drummer Taylor Hawkins, Jane’s Addiction’s guitarist Dave Navarro and bassist Chris Chaney, played their first full gig in Los Angeles this week (November 23) – watch them cover David Bowie below. The supergroup had made their live debut in September with a set at...
ROCK MUSIC・12 DAYS AGO
The Guardian

David Bowie began the 90s by rashly announcing that he would never play his greatest hits again. Fans could vote for their favourites via a phone line, the setlist for his upcoming tour would be based on the results, and then that would be that. “By the time I’m in my late 40s, I will have built up a whole new repertoire,” he bullishly announced.
MUSIC・12 DAYS AGO
nextmosh.com

70 Greatest Music Documentaries of All Time

The movies have always loved giving actors the chance to play rock star or impersonate an iconic musician/singer, recreating those famous “Eureka!” studio moments and greatest-hits shows for any number of music biopics. When it comes to historical musical moments, however, there’s nothing like seeing the real thing. A number of documentarians saw the advantage of capturing a number of legendary artists and bands in their heyday and/or once-in-a-lifetime performances — partially for posterity, partially for plain old reportage and partially for the second-hand high of it all. And thanks to new access to archives and updated technology, a whole generation of filmmakers have come up learning the art of docu-portraits and genre breakdowns that run the gamut from sub-subgenres to broad stem-to-stern histories of rock, jazz and country-and-western. It’s never been easier to make a music documentary these days. Not all of them, of course, are created equal.
MOVIES・12 DAYS AGO

This week marks the release of the David Bowie 5: Brilliant Adventure (1992 – 2001) box set, and while the massive seven-CD or 18-LP set also features plenty of exciting rarities and remastered material, there’s one part of it in particular that’s sure to be the biggest draw for Bowie completists. The box set includes the first official release of Toy, the long-shelved lost album that saw the legendary musician re-recording some of his lesser-known early work.
MUSIC・11 DAYS AGO
Time Out Global

The 50 greatest breakup songs of all time

From distraught soul singers to rockers ready to burn love to the ground, these are the best brokenhearted songs ever written. Like the jaded evil twins of love songs, breakup anthems run the full gamut of emotion. Sadness and grief, sure, but like the events that inspire them, breakup songs come in all flavors. Some are rightous cries of joy following the end of a rough union. Others are pensive meditations on human connection. And some just want to burn the very concept of love to the ground.
MUSIC・11 DAYS AGO
liveforlivemusic.com

The Weeknd's 'Blinding Lights' has been crowned the greatest Billboard Hot 100 single of all time. The 31-year-old megastar's record-breaking 2020 hit single from his acclaimed LP 'After Hours' has dethroned the '60s classic 'The Twist' by rock and roll legend Chubby Checker. The 'Starboy' hitmaker's tune has spent 90...
MUSIC・13 DAYS AGO

In the new episode of his ‘Quest for Craft’ series, Questlove spoke with punk legend Patti Smith, and he tells HollywoodLife how this discussion highlighted the creative mind’s relationship with time. There’s a moment in episode three of Quest for Craft when Questlove asked his guest, Patti Smith, how “it...
MUSIC・12 DAYS AGO
Literary Hub

On today’s episode of The Literary Life, Mitchell Kaplan talks to Bob Spitz about his latest biography, Led Zeppelin, out now from Penguin Press. Bob Spitz: Well, you know, Robert Plant was not Jimmy Page’s first choice. It’s funny. I always say that Led Zeppelin was put together very much like The Monkees. Jimmy had a sound in his head, and then he went out to look for guys, one from Column A, one from Column B. But his first choice, of course, was Steve Winwood. He was never getting anywhere with Steve Winwood.
MUSIC・8 DAYS AGO
News 8 KFMB

David Gahan On Why 'Imposter' Doesn't Sound Like A Covers Album

David Gahan & Soulsavers' latest LP, Imposter, came together so smoothly that Gahan wondered at times when the other proverbial shoe was going to drop. Gahan and nine other musicians curated songs for the record, arranged and recorded them all at Rick Rubin's Shangri-La recording studio in southern California in November of 2019.
MUSIC・7 DAYS AGO
floodmagazine.com

Earthlings, Suburban Buddhas, and Outsiders: David Bowie in the ’90s

After the ultimately unsatisfactory gloss and floss of his post–Let’s Dance ’80s, David Bowie’s ’90s were set to be a dramatic rearrangement of his goals with an intent to experiment. Starting with his raw-knuckled kind-of-band Tin Machine’s albums, Bowie’s aim was to shake out the doldrums that put him squarely in rock’s mainstream with a volition to herald art above commerce. That meant Bowie remaking his initial version of plastic soul (that which he called 1975’s Young Americans) into something jazzy and spacious with Black Tie White Noise, the ambient whirr of The Buddha of Suburbia’s soundtrack, returning to the Eno-driven avant-garde scene of Low and Heroes with the wonky Outside and its electro-jungle-inspired sister Earthling, before ending the decade with the slickly strange and dramatic AOR of Hours and starting the 21st century with a look back to his youthful self with Toy, an album famously unreleased.
MUSIC・5 DAYS AGO
skiddle.com

The Strange Reason This Forgotten David Bowie Game Is Trending

Thanks to the emergence of a new COVID-19 variant named Omicron, a 1999 video game starring David Bowie has begun trending. Some people have been unexpectedly reminded by "Omikron: The Nomad Soul," which bears a name that reminds people of the new coronavirus variant (of course, both take their name from the Greek alphabet). While a good number of nostalgic gamers are just enjoying a fun and unexpected link between current events and a bizarre video game from the late 90s, some people have broken out the red string and cork boards and are drawing eerie connections between the two.
VIDEO GAMES・3 DAYS AGO
Rolling Stone

The recording for The Teskey Brothers’ second album kicked off with what can only be described as a snakebitten situation. Holed up in Sam Teskey’s home studio, the band had a singer who couldn’t sing (Josh Teskey had temporarily lost his voice to a cold), a producer (Paul Butler) undergoing a divorce, and an analogue format tape machine that broke down on the first day. None of these hiccups are present on Run Home Slow. Backed by the sharp and masterly efforts of a band born to weave southern gospel, soul, and R&B together, frontman Josh Teskey delivered a radiant vocal performance with as much grit as it has libidinous sensibilities. Indebtments to soul luminaries like Sam Cooke and Aretha Franklin aside, the album swaggers with showmanship and precision. From the first chorus of opener “Let Me Let You Down”, right through to the slow-dance of “That Bird”, the brothers and childhood friends traverse startlingly beautiful terrain. As it turns out, despite the false start, the record wasn’t jinxed at all. Run Home Slow hit number two on the ARIA chart, under Ed Sheeran’s fourth album.
MUSIC・1 DAY AGO