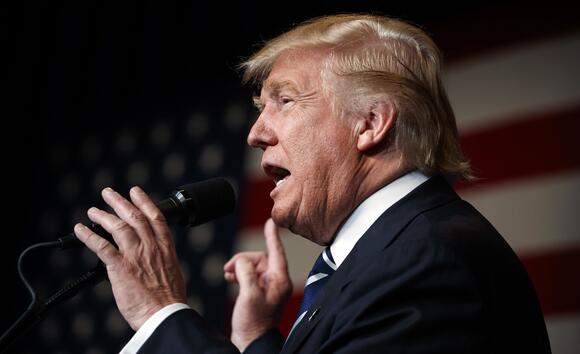 Rohn Bishop went to war against Donald Trump — and won.

In 2020, after the chairman of the Republican Party in Wisconsin’s Fond du Lac County refused to stop promoting mail-in balloting as part of his strategy to turn out voters for the then-president, the Trump campaign opened its own office in the region. The move was an attempt to sideline Bishop and the Fond du Lac County GOP because the chairman would not toe the line on mail-in balloting — that it was untrustworthy and verboten.

But Bishop’s turnout machine was so successful and preferred by local Republican activists that the county party’s office bustled down the stretch of the 2020 contest while the Trump campaign’s pop-up office was generally a ghost town. Not only did Bishop and his team hit their turnout goals after all votes were counted, after the Nov. 3 election, he was overwhelmingly reelected Fond du Lac GOP chairman despite vocally crossing Trump on such a sensitive issue.

“I wasn’t trying to cause trouble,” Bishop told the Washington Examiner in a telephone interview. “My fear at the time was that President Trump would scare Republicans away from voting.”

As to how Bishop managed to win another term as county chairman despite further disagreeing with Trump on the matter of whether the outcome in Wisconsin — Biden won the state — was legitimate? Bishop believes it is because the Republican activists who supported his reelection know he worked furiously to deliver Trump a second term. The former president won 62.5% of the vote in Fond du Lac County, more than any GOP presidential nominee in history.

“I wasn’t Never Trump,” Bishop said. “No one can look at me and say I wasn’t working hard for the Republican ticket. I handed out over 1,000 of [Trump’s] yard signs.”

In August, Bishop stepped down as Fond du Lac County GOP chairman to launch a bid for mayor of Waupun, Wisconsin.

To this day, Trump refuses to concede defeat to President Joe Biden and insists the election was stolen as part of a broad conspiracy. Some of his complaints involve the expansion of mail-in, or absentee, voting in the 2020 campaign as a result of the coronavirus pandemic. Wisconsin was among many states that expanded and encouraged mail-in voting, a development the former president said then would lead to massive fraud.

Throughout the campaign, and especially as Election Day approached, Trump in tweets and public comments aggressively encouraged Republican voters to avoid mail-in balloting and participate in-person at physical polling places. It was Bishop’s critical response to this rhetoric and the national news it made in the summer of last year that piqued the ire of Trump campaign headquarters and some of the former president’s staunch supporters. Bishop did not flinch.

“Most people were very appreciative of Rohn standing his ground,” said Jaedon Buchholz, who was the Trump campaign’s top field organizer in Fond du Lac County in 2020 and was appointed interim chairman of the county party. “There were a couple of people a bit annoyed by it. But I don’t recall anything major. Most of the disagreement came when the election happened, and people couldn’t accept the results.”

Like elsewhere in the United States, GOP infighting over whether Trump’s claims about his loss to Biden have merit is roiling Republicans in Fond du Lac County.

Bishop and his allies stand by their position that Wisconsin’s handling of mail-in balloting was above board and could be trusted by Republican voters. And they also reaffirmed their view that expanding access to mail-in balloting in response to the coronavirus was the right call. When Trump began discouraging mail-in voting, Bishop worried it would cost Trump reelection and boost Democrats down-ballot, and that fear drove him to reject Trump’s arguments publicly.

But other Republicans in east-central Wisconsin remain fixated on Nov. 3, 2020.

They are convinced Trump was denied his rightful claim to the state’s 10 Electoral College votes. Biden defeated Trump statewide in Wisconsin 49.6% to 48.9%. In local meetings, however, Republican voters continue to express doubts about the outcome, no matter what they are told to the contrary by GOP officials who are disappointed the 45th president lost but worried that the party will incur more damage if it does not begin to look forward.

Some of that concern is driven by Trump’s threats that Republicans might not show up to vote in the 2022 midterm elections, or even in the 2024 presidential election, unless the 2020 contest is addressed to his satisfaction. Next year, voters in Wisconsin go to the polls to elect a governor and a senator, and the state is expected to reprise its role as a key battleground two years later.

“Our Republican Party is divided in this county, with people trying to move forward and people … who still believe the [notion] that the election was stolen,” said Lisa Freiburg, a Republican and the elected county clerk of Fond du Lac County. “The election went as the election went … I spoke the other night to 70-plus people, and it’s amazing the accusations” leveled about what happened.

We should go to the mail-in voting and the paper ballot all the way in our elections. The electronic boating machines are a malfunction to start with. They can never be trusted as long as there are people like Donald Trump in our politics. That is where Trump got most of his votes, and I am sure if we would have an investigation, we would find that Trump never got half the votes that he supposedly got in his voting machines.

The Biden administration’s recent travel ban on south African nations is a ploy to appear to be doing something about the omicron coronavirus variant, according to Washington Examiner editor-in-chief Hugo Gurdon.
PRESIDENTIAL ELECTION・21 HOURS AGO
The Independent

A local elected official in Michigan who refused to certify the 2020 election result and President Joe Biden’s victory has died of Covid-19. William Hartmann sat on the board of canvassers for Wayne County, which includes heavily Democratic Detroit. Last year, he and fellow Republican member Monica Palmer initially voted against certifying the election results, creating a tie on the board. They later reversed course and certified the election results and Mr Hartmann said he did so after assurances there would be a post-election audit. This came despite the fact that Mr Biden beat former President Donald Trump overwhelmingly...
PRESIDENTIAL ELECTION・20 HOURS AGO

Trump called it "not true" that Melania is enjoying private life and isn't interested in returning to Washington, D.C.,
PRESIDENTIAL ELECTION・22 HOURS AGO
POLITICO

Despite Trump’s strong support for Rep. Mo Brooks, GOP senators have donated to Katie Britt and appeared with her at events.
ALABAMA STATE・11 HOURS AGO
Business Insider

Jena Griswold told The Washington Post that there was a concerted campaign to place Trump allies in roles overseeing elections.
COLORADO STATE・2 DAYS AGO
Washington Post

Over four years in the White House, President Donald Trump proved exceptionally adept at using his office to manipulate the legal system. But the Constitution gives no role — or powers — to ex-presidents. The result is that Trump’s run of evading accountability may finally be ending, as most recently shown by an appellate court’s skepticism Tuesday toward his attempt to block the House Jan. 6 Committee investigation.
PRESIDENTIAL ELECTION・1 DAY AGO

WASHINGTON, Nov 30 (Reuters) - A new fault line opened between Republicans in the U.S. House of Representatives on Tuesday, as lawmakers squabbled publicly over accusations of religious bigotry and racism among party conservatives. In a fight that could further complicate Republican efforts to forge unity ahead of next year's...
CONGRESS & COURTS・2 DAYS AGO
Newsweek

In this daily series, Newsweek explores the steps that led to the January 6 Capitol Riot. On December 1, the dam finally broke. Attorney General William Barr invited Associated Press reporter Mike Balsamo to lunch, telling him on the record that he was breaking with President Donald Trump. "Disputing President...
PRESIDENTIAL ELECTION・2 DAYS AGO
WashingtonExaminer

White House press secretary Jen Psaki lit into congressional Republicans threatening a government shutdown over vaccine mandates, saying they advocate for those who would "infect their coworkers, our children, filling hospitals" with COVID-19 patients.
CONGRESS & COURTS・1 DAY AGO
WashingtonExaminer

Former President Donald Trump is expected to cast a long shadow over the midterm elections, but his increasing involvement in the Senate and gubernatorial races in Georgia, a state he narrowly lost in 2020, is raising questions about how helpful he will be to Republicans.
GEORGIA STATE・2 HOURS AGO

The former president has suggested such an event would be a "ratings bonanza for television," as he blasted the media for "trying to demean the real results."
PRESIDENTIAL ELECTION・2 DAYS AGO
Business Insider

A rift has opened between McConnell and some Republican senators who have pushed vaccine misinformation and opposed mandates.
PRESIDENTIAL ELECTION・1 DAY AGO
POLITICO

With help from Daniel Lippman, Nahal Toosi, Andrew Desiderio, Bryan Bender and Phelim Kine. Send tips | Subscribe here | Email Alex | Email Quint. It’s Nov. 30: Do you know where your land mine policy reversal is?. You may recall that back in Jan. 2020, then-President DONALD TRUMP expanded...
PRESIDENTIAL ELECTION・2 DAYS AGO
WashingtonExaminer

A growing chorus of conservatives is demanding that Senate Republicans shut down the government if President Joe Biden refuses to scrap the federal coronavirus vaccine mandate.
CONGRESS & COURTS・2 DAYS AGO

MADISON, Wis. (AP) — A Republican state lawmaker announced Wednesday that she’s running to be Wisconsin’s next secretary of state, saying she wants to turn the mostly powerless office into a check on the bipartisan Wisconsin Elections Commission. State Rep. Amy Loudenbeck’s announcement is the Republicans’ latest effort to weaken...
WISCONSIN STATE・1 DAY AGO
The Gainesville Sun

Democrats took a drubbing in elections last month, in part, for simply failing to govern. Endless bickering within their congressional caucus squandered chances to pass major reforms in infrastructure, climate and social policies. So why are Republicans rushing to make the same mistake? ...
U.S. POLITICS・2 DAYS AGO
The Guardian

President Joe Biden may have avoided a partisan showdown in the Senate by re-nominating Jerome Powell lead the Federal Reserve, but Republicans on Capitol Hill aren't giving him the benefit of the doubt when it comes to the three additional nominations he's expected to make in the coming weeks.
WARREN, OH・2 DAYS AGO