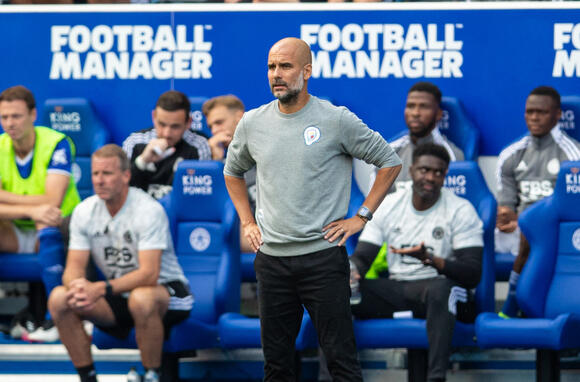 The Cityzens blasted past Club Brugge in Belgium with a 5-1 victory in the midweek Champions League game courtesy of a Riyad Mahrez brace and goals from Joao Cancelo, Kyle Walker, Cole Palmer.

Pep Guardiola’s men are inches away from securing a spot in the Round of 16 of Europe's premier competition, but for now, all the attention turns back towards their Premier League title defence.

The Blues currently sit third in the table with seventeen points after eight games and are going neck to neck with Chelsea and Liverpool for yet another title charge.

Meanwhile, Graham Potter’s side has exceeded expectations this season, with the Seagulls sitting right behind the defending champions in fourth spot with 15 points.

Pep Guardiola has openly announced his admiration for Potter’s style of play on numerous occasions and the Catalan will surely be looking forward to this unique challenge on Saturday.

Here is how you can watch Manchester City’s game on October 23!

In the UK, Saturday’s match will be broadcast live only on Sky Sports Main Event, Sky Sports Premier League and Sky Ultra HD.

beIN Sports Premium 1 and beIN SPORTS CONNECT will provide coverage of the game for viewers in the United Arab Emirates.

The latest piece of information follows on from previous reports surrounding Barcelona and Manchester City throughout Friday, with the earliest story concerning the Camp Nou club's Director of Football and a trip to the Premier League champions' offices. While many assumed that the topic of the meeting between the relevant...
PREMIER LEAGUE・6 DAYS AGO
CityXtra

Gabriel Jesus seems to love games against the fiercest of opposition. On Wednesday night, the Brazilian international added the star-studded squad of Paris Saint-Germain to his ever-growing list of big game scalps, scoring a late winner for Pep Guardiola's side. Replacing Oleksandr Zinchenko early in the second half, Gabriel Jesus...
PREMIER LEAGUE・7 DAYS AGO
The Independent

When Thomas Tuchel comes in after games and scans the other results, he doesn’t automatically go to Liverpool or Manchester City. At least not yet.“There are some teams behind us who show consistency, who show quality, who show determination,” the Chelsea manager said last week. “This is what it is. You have a right to be proud of your competition here, in the Premier League, and for us it feels good because we are in the middle of that race and we want to stay here. I don’t know if it will settle down.”There is a bit of a...
PREMIER LEAGUE・1 DAY AGO
CityXtra

Wednesday night's sliding finish to level the score against Paris Saint-Germain was Raheem Sterling's third goal in his last three games. The England international has struggled to maintain a starting spot in recent months but is starting to show glimpses of recapturing the form that made him indispensable to Pep Guardiola.
PREMIER LEAGUE・7 DAYS AGO

Two teams that endured contrasting fortunes in the English Premier League are all set to go head to head on Sunday in EPL. Manchester City went to the international break with a win against Manchester United. Ahead of the Manchester City vs Everton fixture, here is our preview, prediction and live streaming details.
PREMIER LEAGUE・13 DAYS AGO
CBS Sports

The Premier League returns to action this Saturday. Current Records: Brighton & Hove Albion 4-2-5; Aston Villa 3-7-1 Aston Villa and Brighton & Hove Albion are even-steven against one another since October of 2019 (1-1-2), but likely not for long. Villa will take on Brighton at 10 a.m. ET on Saturday at Villa Park after a week off. If the 0-0 final from the last time they met is any indication, this game could be decided by whoever gets on the board.
PREMIER LEAGUE・13 DAYS AGO
Las Vegas Herald

Brighton and Hove Albion remains in the top half despite an eight-match winless run across all competitions, something that Leeds United hopes is in its favor when it visits the Amex Stadium on Saturday (start time 12:30pm ET on NBC and online via NBCSports.com). All that said about Brighton, the...
SOCCER・7 DAYS AGO

The Brazilian international has never been in danger of losing his number one shirt - or number 31 in his case - at Manchester City, since signing for the club four years ago. His deputy in US international Zack Steffen is more than capable of filling his boots in cup competitions, but the 28-year-old is Pep Guardiola's go-to-man in the Premier League and Champions League.
PREMIER LEAGUE・7 DAYS AGO
FanSided

Chelsea vs Man United preview: How to watch on TV and live stream

Premier League leader Chelsea welcomes Manchester United to Stamford Bridge on Sunday. The two clubs head into this match in very contrasting form. After an embarrassing 4-1 thrashing at the hands of Watford in its last league outing saw Man United sack manager Ole Gunnar Solskjaer. In the Premier League, the Red Devils have earned four points from a possible 21 in their last seven games. Man United suffered bad defeats to its closest and most fierce rivals, Man City (0-2) and Liverpool (0-5), on their home ground, which led to the managerial casualty. The Red Devils are eighth heading into this match, 12 points behind the leaders and six points off the top four. The Manchester side got back to winning ways against Villarreal midweek in the Champions League to confirm its progression to the knockout rounds. The Red Devils shockingly have had more sackings (four) than trophies (three) since they last won the Premier League.
PREMIER LEAGUE・6 DAYS AGO
CityXtra

The Xavi reign is well underway at FC Barcelona. The legendary midfielder has replaced Ronald Koeman as manager with the aim of restoring some pride at the Camp Nou. In his first two games, Xavi has guided his young squad to a 1-0 win over local rivals Espanyol in La Liga and a 0-0 draw with Benfica in the Champions League.
PREMIER LEAGUE・5 DAYS AGO
vavel.com

When the PFA announce their Premier League Team of the Year in six months' time, you will almost certainly see Joao Cancelo's name in one of the full-back positions. The Portuguese international's performances so far this season have been nothing short of extraordinary. In essence, he has not done much defending, but what he's produced going forward has been mesmerising.
PREMIER LEAGUE・4 DAYS AGO
CityXtra

Lampard spent a season at the Etihad Stadium after the end of his contract at Chelsea in 2014, during which he registered eight goals and four assists in 38 appearances across all competitions. The former Derby County boss, who was sacked as Chelsea manager in January, has been linked with...
PREMIER LEAGUE・6 DAYS AGO
NJ.com

Manchester City, led by Belgian midfielder Kevin De Bruyne, faces West Ham in a Premier League match on Sunday, November 28, 2021 (11/28/21) at Etihad Stadium in Manchester, England. Fans can watch the match exclusively with a subscription to Peacock. Sign up for the streaming service here. Here’s what you...
MANCHESTER TOWNSHIP, NJ・4 DAYS AGO
CityXtra

Man City 'Drawing Up Plans' on Left-Back Signing for 2022

It has been a position that has seemingly been one of the most difficult to recruit within since the arrival of Pep Guardiola, and the required wholesale changes that were made at the end of the 2016/17 season. During the Catalan manager's time at the club, a number of players...
PREMIER LEAGUE・6 DAYS AGO
CityXtra

City - with a heavily rotated side - dominated Paris Saint-Germain at the Etihad Stadium to confirm qualification and top spot in Group A. Kylian Mbappe opened the scoring for the Parisians just after half-time with a well-taken finish at the back post. Manchester City were in control, but PSG had made their limited opportunities count.
PREMIER LEAGUE・7 DAYS AGO
CityXtra

Zinchenko, who joined Manchester City for £1.7 million in 2016, has played regularly at left-back under Pep Guardiola, making 105 appearances under the Catalan since his debut against Wolves in the Carabao Cup in 2017. However, the 24 year-old, formally plays in central midfield - the position he occupies when...
PREMIER LEAGUE・6 DAYS AGO
TechRadar

Showing some of their best form since Pep Guardiola took on the Etihad hot seat, Man City face a stern test of their title credentials today as they face David Moyes' buoyant Hammers. Read on to find out how to watch Man City vs West Ham online and get a Premier League live stream, no matter where you are in the world today.
NFL・4 DAYS AGO
The Independent

Bernardo Silva’s exquisite volley inspired Manchester City to a battling 2-1 win at Aston Villa.The forward’s brilliant strike proved the difference as City were made to fight for a fourth straight Premier League win.Silva’s first-half screamer added to Ruben Dias’ opener had the champions in cruise control before Ollie Watkins’ goal after the break made life uncomfortable.Jack Grealish was a late substitute on his first return to Villa Park since his £100million summer move to the Etihad to earn a mixed reception.Chelsea’s 2-1 win at Watford made victory imperative for City and they sit a point behind the leaders in...
PREMIER LEAGUE・23 HOURS AGO