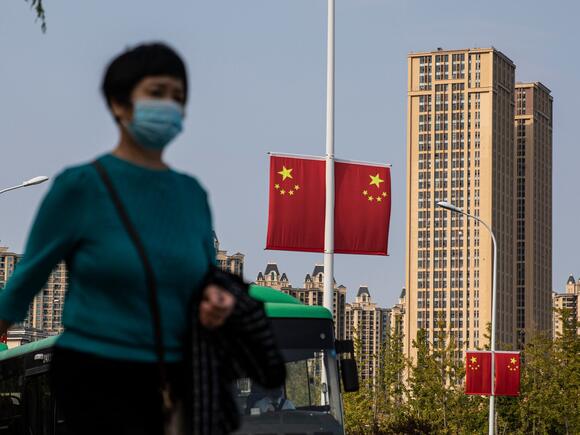 China's property developers have grown at breakneck speed over the last decade, powered by huge amounts of debt. Authorities have started to rein them in with strict debt limits, but snapping an addiction isn't easy.

Evergrande is one of China's biggest property developers and among the most indebted companies in the world, owing more than $300 billion. It's creaking under the pressure and has recently failed to make numerous offshore bond payments.

Just before a 30-day grace period was set to expire, Evergrande wired $83.5 million Thursday to pay interest on an offshore dollar bond. But it faces more deadlines around missed bond payments, and $45.2 million in interest is due later in October. If Evergrande fails to cough up it will officially be in default.

The Evergrande crisis is now spreading to other developers and threatens to rock China's real estate sector, which economists say makes up around 30% of the economy.

Perhaps the most worrying default so far has been mid-sized developer Fantasia. Earlier this month it failed to pay a $206 million dollar bond maturing on October 4, according to a filing .

The default was troubling because the company had reassured investors only two weeks earlier that there was no liquidity issue , said Craig Botham, chief China economist at Pantheon Macroeconomics.

"A great many Chinese developers are in more fragile positions than their balance sheets might suggest," he said.

Fantasia is smaller than Evergrande, with revenue of $2.76 billion in 2019, compared with Evergrande's $69.15 billion, according to Bloomberg data.

Sinic Holdings defaulted on a bond and interest payments worth $250 million on October 19, Bloomberg reported . It's another mid-sized property developer, with revenue of $3.91 billion in 2019.

Evergrande-related stress has slowed sales in the property sector and driven up borrowing costs, adding to pressure on developers like Sinic.

The yield on riskier Chinese dollar bonds – which are big sources of funding for developers – soared to 20% earlier this month.

China Properties Group is considerably smaller than Sinic, but it is also in trouble. It said on  October 15 that it had defaulted on bonds worth $226 million, in a filing on the Hong Kong stock exchange.

There's likely to be little respite for developers this year, according to UBS. The bank's analysts said in an October 19 note that it expects new property starts to tumble 20% year-on-year in the fourth quarter, "bringing further downward pressure on the economy."

Modern Land failed to pay back a $250 million bond that came due on Monday, making it the latest Chinese real-estate giant to miss a critical debt deadline.

The missed payment was caused by "factors including the macroeconomic environment, the real-estate industry environment, and the COVID-19 pandemic," Modern Land said in a press release .

The company requested earlier in October that it delay the repayment for three months, saying it aimed to take measures to "avoid any potential payment default."

Yet the mid-sized developer, which owns 200 apartment and office properties across China, scrapped those plans later in the month. It said in an October 20 filing it was facing liquidity problems and was seeking to hire financial advisers.

It's not yet clear whether the company has formally defaulted on the debt. Research firms including OANDA and Lucror Analytics called the missed payment a default, but Modern Land didn't specify whether it was a default or the start of a cross-default with its other debts.

Modern Land attempted divestitures, additional borrowing, and help from strategic advisors to stave off the debt problems, Bloomberg reported. The company's chairman and president had also said he and the company would contribute nearly $124 million to pay off shareholder loans.

Pressure on Xinyuan led it to swap $208 million of dollar bonds with debt that matures in two years' time, in a distressed-debt exchange.

The ratings agency Fitch gave Xinyuan a "CC" score on Wednesday , meaning some kind of default is probable. Fitch said the mid-sized developer faces a "tight liquidity situation, with weak funding access and large offshore bond maturities in the next twelve months."

S&P Global Ratings earlier this month downgraded Greenland, a massive developer with revenues of $61.98 billion in 2019. It got a "B+", meaning it's currently able to pay its debts but is vulnerable to a shock.

Greenland is struggling as its borrowing costs shoot higher during the Evergrande crisis, with domestic and foreign investors now much less keen to lend to property companies.

"The company's cash could continue to deplete over the next 12 months due to weaker sales and cash collection," S&P said.

Insider contacted all the property developers mentioned in this article for comment but none responded.

WASHINGTON, Dec 3 (Reuters) - Any move by China to invade Taiwan would have "terrible consequences," U.S. Secretary of State Antony Blinken said on Friday, adding that he hoped Chinese leaders would think very carefully about "not precipitating a crisis" across the Taiwan Strait. Blinken, speaking at the Reuters Next...
FOREIGN POLICY・46 MINUTES AGO
Washington Post

Hit China where it hurts: Manufacturing

Josh Rogin’s Nov. 26 Friday Opinion column, “The Uyghur divestment movement is here,” reviewed the Western response to the Chinese government’s repression and violation of the human rights of Uyghur Muslims. It noted that though there is some talk about boycotting the Beijing Winter Olympic Games in February, the International Olympic Committee has not criticized the government, and Congress won’t pass the Uyghur Forced Labor Prevention Act. The Biden administration is planning a diplomatic boycott of the Beijing Games, but corporations have not cut their planned sponsorships.
CHINA・1 DAY AGO
Business Insider

Taiwan tycoon says he does not support the island's independence after China fined his vast conglomerate $74.4 million

China last week fined Taiwan's Far Eastern Group a total of $74.4 million for a series of infractions. Beijing said Taiwanese firms could not expect to operate in China and support the island's independence. Taiwan Premier Su Tseng-chang said China was "always rude and unreasonable, and does not understand democracy,...
ECONOMY・2 DAYS AGO
investing.com

(Bloomberg) -- Kaisa Group Holdings Ltd. failed to win bondholder approval for a $400 million debt swap designed to avert default, in a development that could spur contagion risk just as global investors return to offshore property bonds. The firm had sought to exchange the dollar notes maturing Dec. 7...
ECONOMY・21 HOURS AGO

The world’s most expensive city is no longer in Asia or Europe—or even the U.S.

Subscribe to Fortune Daily to get essential business stories straight to your inbox each morning. Israel’s Tel Aviv has leapfrogged Hong Kong and Singapore to become the world’s most expensive city to live in, according to the Economist Intelligence Unit (EIU). The Israeli city climbed from fifth place last year...
WORLD・2 DAYS AGO
sanantoniopost.com

Chinese authorities have summoned the founder of Evergrande, once China's top-selling developer which is now on brink of default, after the firm announced earlier on Friday it may be unable to repay its debt. The real estate developer received a demand under a $260 million guarantee obligation, which it may...
ECONOMY・5 HOURS AGO
Markets Insider

'We recognize that our stakeholders have differing views on China - BlackRock takes those concerns seriously,' the company said in a statement.
ECONOMY・2 HOURS AGO

China is increasing research into the Omicron variant to develop improved vaccines due to the newest strain. The ability to spread fast and bypass antibodies have concerned authorities. Last Thursday, a Chinese official said that China would initiate accelerated studies to develop a vaccine that deals with COVID-19 mutations. Some...
MEDICAL & BIOTECH・10 HOURS AGO
MarketWatch

Most Treasury yields advance, except for the 30-year rate, led by a rise in shorter-dated rates.
ECONOMY・1 DAY AGO
Markets Insider

SEC Chairman Gary Gensler had warned his agency could crack down on China-linked companies who don't comply with audit regulations.
U.S. POLITICS・1 DAY AGO
The Motley Fool

Why Alibaba and Other Chinese Stocks Sank Today

The SEC just made it clear that it's serious about delisting Chinese stocks from U.S. exchanges if the companies don't follow its financial disclosure rules.
STOCKS・6 HOURS AGO
Markets Insider

Danish asset manager Saxo Bank has released its Outrageous Predictions list for markets in 2022. They include Spotify stock sliding as musicians use NFTs to build revenue share. Another prediction sees US inflation soaring to 15% and the Fed moving too late in hiking interest rates. NFTs taking over the...
STOCKS・6 HOURS AGO
Markets Insider

US stocks rallied Friday despite a disappointing November jobs report. US nonfarm payrolls grew by 210,000 last month — way below the median forecast of 550,000 jobs. The weak data raised investor hopes for a slower pace of tapering from the Federal Reserve. Sign up here for our daily newsletter,...
STOCKS・8 HOURS AGO
Markets Insider

India won't ban private cryptocurrencies, but will regulate them instead: NDTV report

India looks set to regulate crypto trading, rather than slap an outright ban on digital currencies as feared. People should declare their crypto assets and put them on an exchange, the government suggested, according to an NDTV report. The market regulator should then oversee those exchanges, with prison time and...
ECONOMY・6 HOURS AGO
Markets Insider

Alibaba, Tencent and other Chinese techs slide in Hong Kong after Didi bows to pressure to delist in New York

Chinese techs in Hong Kong fell after ride-hailing giant Didi bowed to pressure to pull its US offering just months after its blockbuster IPO.
ECONOMY・11 HOURS AGO
MarketWatch

U.S.-listed shares of Chinese companies, including Nio and Alibaba, tank in the wake of Didi Global's news it will delist its shares from the New York Stock Exchange.
BUSINESS・3 HOURS AGO
Cheddar News

Chinese regulators are reportedly behind China-based ride-hailing company DiDi exiting from the New York Stock Exchange, just days after listing earlier this year. The regulators stated prior that DiDi had not received the necessary clearances to list in the states. Gordon Chang, Asian affairs expert, joined Cheddar to break down what the delisting says about the relationship between nations. "This really strikes me as an attempt to really to force a decoupling of China and the U.S. in the financial markets," Chang said.
ECONOMY・2 HOURS AGO
The Guardian

US stocks soared on Thursday as investors shrugged off concerns of a second Omicron case found in Minnesota. The Dow Jones soared more than 600 points while the S&P 500 surged more than 1.6%. Apple fell on concerns that it's experiencing slowing iPhone demand for the holiday season. US stocks...
STOCKS・1 DAY AGO