‘SNF’ 49ers take on the Colts in crucial Week 7 game 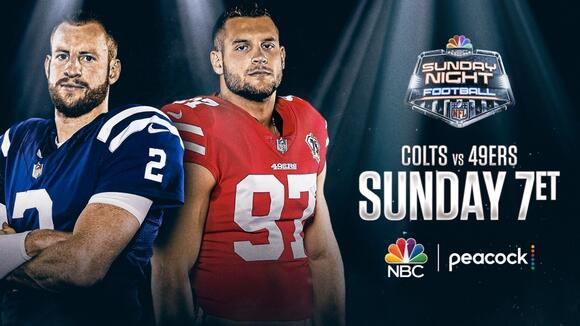 (WCMH) – This Sunday on NBC’s “Sunday Night Football” the San Francisco 49ers, 2-3, will host the Indianapolis Colts, 2-4, at Levi’s Stadium in California, for the NFL’s Week 7.

After three straight weeks of losses, San Francisco will have a chance to take down Indianapolis on the 49ers’ home turf. The Colts, however, might be able to ride the momentum of their victory over the Texans last week, even though the match-up was heavily in Indianapolis’ favor before the game started.

San Francisco quarterbacks Jimmy Garoppolo and Trey Lance have traded off the position this season, with Garoppolo starting the first four games and Lance taking on the position for the Week 5 game, due to Garoppolo’s calf contusion.

Since last week was a bye week for the team, it’s possible Garoppolo will be healthy enough to play. In addition, Lance suffered a knee sprain in the Week 5 loss against the undefeated Arizona Cardinals, so he might be unable to play. Head coach Kyle Shanahan’s decision on the QB position could come down to game time.

On the Colt’s side, Former Eagles QB Carson Wentz was tapped to lead the team after their legendary quarterback Phillip Rivers retired in 2020. But Wentz, 28, has had a rough start to the 2021 season with three interceptions, two fumbles and eight sacks. This was especially troubling after a punishing 2020 season that put him at the top of the NFL list for interceptions and sacks.

But things might be turning around for Wentz, he has improved during the last two games against powerhouse Baltimore and the aforementioned Houston, scoring four touchdowns and zero interceptions through two games. This all builds the anticipation for Sunday’s game which is crucial for Wentz and the team to remain competitive in the division.

This is the tenth entry into the 2021 Josh Allen Game Grades series. Each week, Josh Allen’s numbers, decision making, and overall performance will be reviewed and given a letter grade. In Week 11, the Buffalo Bills got destroyed by the Indianapolis Colts in an eye opening 41-15 rout. Josh...
NFL・12 DAYS AGO
NBC Sports

The New England Patriots just added another primetime matchup to their schedule. The Patriots' Week 15 matchup with the Indianapolis Colts at Lucas Oil Stadium is set for Saturday, Dec. 18 at 8:20 p.m. ET on NFL Network. That Patriots-Colts game was tentatively scheduled for Sunday, Dec. 19 with a...
NFL・10 DAYS AGO
fantasypros.com

San Francisco 49ers quarterback Jimmy Garoppolo was 16-for-22 for 176 yards and two touchdowns while adding a pair of rushes for six yards in a 30-10 win over the Jacksonville Jaguars on Sunday. Fantasy Impact:. Even though the 49ers scored just three points in the first quarter, they were in...
NFL・12 DAYS AGO
CBS4 Indy

INDIANAPOLIS – With the NFL season past the halfway point, it’s time to officially start talking about the muddled playoff picture. Five teams are within a half game of the last playoff berth in the AFC, while in the NFC, five teams are battling for the first seed. Week 11 kicks off with a rematch […]
NFL・16 DAYS AGO

ORCHARD PARK, N.Y. — Coaches love to remind us they never look at their team’s schedule in chunks. They serve up the, “We take them one game at a time,” line as if the rest of us can’t possibly comprehend the logic of focusing only on the here and now.
NFL・14 DAYS AGO
pff.com

Running back Jonathan Taylor‘s career day, headlined by five touchdowns, helped the Indianapolis Colts cement their biggest victory of the season — a vanquishing of the Buffalo Bills on the road, 41-15, to get back over .500. In addition to Taylor's big day, the Indianapolis defense tagged along with four...
NFL・12 DAYS AGO
Sportsnaut

Check-in here throughout the year for the NFL games today full weekly schedule. Including links to Sportsnaut’s season forecasts for
NFL・1 DAY AGO
Sporting News

What channel is 49ers vs. Jaguars on today? Time, TV schedule for NFL Week 11 game

Could the San Francisco 49ers be getting healthier at the right time? After a tough loss to the Cardinals two weeks ago, they trounced the Rams on “Monday Night Football.” Jimmy Garoppolo threw the ball just 19 times in a 31-10 win, the 49ers suddenly have found themselves in the thick of the Wild Card race at 4-5. The Rams have lost their last two, and they go up against the rolling Green Bay Packers on Sunday.
NFL・13 DAYS AGO

Pick: Bills 26-20 The Bills got back on track last week with a victory over the Jets, while the Colts edged the Jaguars. Buffalo's defense continues to play top-level football, as it allows just 3.8 yards per rush on the ground. That's a problem for Jonathan Taylor and the Colts offense. That will force Carson Wentz to win it, and he won't. Bills take it.
NFL・14 DAYS AGO
FOX59

INDIANAPOLIS – It was less than 2 minutes of Wednesday’s Episode 3 of HBO’s “Hard Knocks,’’ but it was impossible to ignore. There was Frank Reich on the sidelines, arms crossed. His Indianapolis Colts had just suffered a fourth turnover – Nyheim Hines’ muffed punt – and Tom Brady was back in business early in […]
NFL・1 DAY AGO
Indianapolis Colts

The Tampa Bay Buccaneers and Indianapolis Colts, who engaged in a wild 73-point shootout late in the 2019 season, are getting a rematch two years earlier than originally expected. The 7-3 Buccaneers will head to Lucas Oil Stadium in Indianapolis this weekend for a contest against the rapidly-ascending 6-5 Colts....
NFL・9 DAYS AGO

Week 11: Colts Offense by the Numbers

Each week during the season, I will be walking through the data from the previous Colts game analyzing the numbers to form a sort of “what happened” narrative as well as comparing the Colts against all other teams in the league. For a glossary of the stats listed, reference Season Stats. Thanks to Pro Football Reference, NFL.com, Football Outsiders, and the nflFastR project for being awesome sources of weekly data.
NFL・9 DAYS AGO
USA Today

The Tampa Bay Buccaneers are set for another tough road test against one of the hottest teams in the NFL, as they head to Indianapolis on Sunday to take on the Colts. Tampa Bay is coming off a dominant Monday night win over the New York Giants at home, but they’ll need to prove they can perform at that same level against quality teams on the road, and Sunday gives them the perfect opportunity to do just that.
NFL・6 DAYS AGO
FanSided

The Tampa Bay Buccaneers will head to Indianapolis this Sunday to take on the Colts in an inter-conference tilt. The game is significant because both teams are battling for playoff positioning. It is also a measuring stick for two teams that more was expected of. Sure, the Bucs are in...
NFL・7 DAYS AGO

The Tampa Bay Buccaneers have proven they can win at home against inferior opponents, but can they do it on the road against one of the hottest teams in the NFL?. That’s what the defending champs will have to do Sunday, when they travel north to take on Jonathan Taylor and the Indianapolis Colts.
NFL・6 DAYS AGO
Indianapolis Colts

SANTA CLARA — Here come the 49ers. The 49ers’ third consecutive victory — a 34-26 win over the Minnesota Vikings — was more of the same. The 49ers did not dominate as they did in their recent victories over the Los Angeles Rams and Jacksonville Jaguars. But it might have been even more impressive because not everything went according to plan.
NFL・5 DAYS AGO