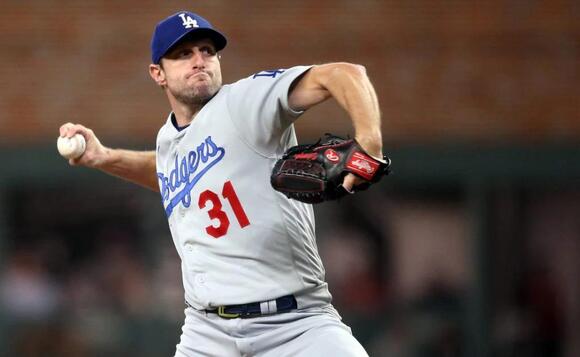 The Braves, who lead the best-of-seven series 3-2, beat Scherzer in Game 2, when he allowed two runs on four hits in 4 1/3 innings. The right-hander struck out seven and walked one while throwing 79 pitches.

In Scherzer’s place Saturday, the Dodgers could move up their scheduled Game 7 pitcher, Walker Buehler, to work on three days’ rest. Buehler came back on short rest to pitch Game 4 of the NL Division Series against the San Francisco Giants, and he turned in 4 1/3 innings of one-run ball as the Dodgers posted a 7-2 victory to force a decisive fifth game, which they won.

Another option for Game 6 could be a bullpen game led by David Price, who was just added to the roster Friday as an injury replacement for Joe Kelly, or Tony Gonsolin.

Los Angeles has been without veteran left-hander Clayton Kershaw throughout the postseason due to a forearm injury.

The Dodgers acquired Scherzer from the Washington Nationals in a July 30 trade, and he went 7-0 with a 1.98 ERA in the regular season for Los Angeles, with the team winning all 11 of his starts. He is 0-1 with a save and a 2.16 ERA in four appearances (three starts) during the 2021 postseason.

He threw 179 1/3 innings during the regular season and has added 16 2/3 innings in the postseason.

Scherzer, a three-time Cy Young Award winner, led the Nationals to the 2019 World Series title. He went 3-0 with a 2.40 ERA in six postseason games (five starts) that year.

Let's face it, the Los Angeles Dodgers were dealt a huge blow on Monday. First it was the loss of Cy Young Award finalist and arguably the best pitcher on the staff last season in Max Scherzer. Scherzer agreed to sign a three-year, $130 million dollar contract with the New York Mets, making him the highest paid player by annual average value in MLB history.
MLB・8 DAYS AGO
Los Angeles Daily News

Starting pitchers Walker Buehler and Max Scherzer were named to the All-MLB first team on Tuesday while fellow starter Julio Urias, relief pitcher Kenley Jansen and infielder Trea Turner were named to the second team. This is the third year for the All-MLB honors which are determined by a combined...
MLB・15 DAYS AGO
fox40jackson.com

Trevor Bauer, the Los Angeles Dodgers pitcher accused of sexual assault, used the Kyle Rittenhouse acquittal to take a shot at “the media.”. “I guess it’s important to know all the facts before jumping to conclusions, huh? Apparently not everything written in the media is true,” Bauer tweeted. Kyle Rittenhouse...
MLB・18 DAYS AGO
thinkbluepc.com

The MLB Hot Stove is scalding hot, with most players choosing to sign with a team before the assumed impending lockout begins on Wednesday, December 1. There have been rapid fire signings by teams, and before one registers, the next one is announced. Two signing not missed by fans of the Los Angeles Dodgers are those of Max Scherzer and Corey Seager.
MLB・9 DAYS AGO

Dodgers Offseason: Insider Says Mets May be in the Lead in Max Scherzer Sweepstakes

The hot stove is hot on Sunday night! After a day where several high profile moves and signings have been reported around baseball, MLB insider Jon Heyman added a wrinkle to a potential return to the LA Dodgers for ace right-hander Max Scherzer. As it stands, it seems that the...
MLB・9 DAYS AGO
FanSided

Dodgers getting punked by Mets in Max Scherzer race is unforgivable

Last offseason, the Los Angeles Dodgers and New York Mets were the finalists for Trevor Bauer, who somehow managed to convince both franchises that he’s worth at least $80 million over two years. The Dodgers ended up taking the bait, signing the Mickey Mouse Cy Young winner and aspiring professional...
MLB・9 DAYS AGO
CBS Sports

The collective bargaining agreement between Major League Baseball's owners and the players is set to expire on Wednesday night. It is assumed an agreement won't be reached in the coming days, meaning free agency and trade talk will be completely shut down and a lockout will be put in place. In the meantime, perhaps there will be a flurry of moves, as there might be some players who don't want to go several weeks (months?) without knowing where they'll play in 2022.
MLB・10 DAYS AGO
KTLA

Right-hander Max Scherzer agreed to a record-setting $130 million, three-year contract with the New York Mets and shortstop Corey Seager struck a $325 million, 10-year deal with the Texas Rangers on Monday as players and teams rushed to reach agreements before an expected lockout. The pair are among among eight players who in recent days […]
MLB・8 DAYS AGO

Max Scherzer used to face Jacob deGrom on Opening Day. Now, he’s going to cheer on deGrom on Opening Day? Wearing home whites? At Citi Field? Against the Washington Nationals?. That’s quite a visual. There’s almost nothing that could have tarnished Scherzer’s sparkling, snorting, 6½-season tenure in Washington — except...
MLB・9 DAYS AGO
ClutchPoints

The New York Mets are in the market for a big arm in free agency, and apparently have their sights set on All Star pitcher Max Scherzer. The Los Angeles Dodgers remain the favorite to retain his services, but it is far from a lock. As MLB Network Insider Jon Heyman reported, the Mets are focused on Scherzer.
MLB・9 DAYS AGO
ABC30 Fresno

Right-handed reliever Daniel Hudson and the Los Angeles Dodgers are nearing an agreement on a one-year deal, sources told ESPN's Jeff Passan. When completed, it's expected to be for around $7 million. Hudson, 34, was acquired by the San Diego Padres in a midseason trade with the Washington Nationals. He...
MLB・9 DAYS AGO
Dodgers Nation

In some much needed positive news, it was announced that Dodgers slugger Cody Bellinger will now be playing with dad power in 2022. Belli and his girlfriend Chase Carter welcomed their daughter Caiden into the world today and she’s already pretty adorable. They had previously announced that they would be...
MLB・8 DAYS AGO

During his rookie season, Max Scherzer was part of a star-studded rotation with the Arizona Diamondbacks. Read more on Audacy Sports.
MLB・9 DAYS AGO
dailydodgers.com

The Los Angeles Dodgers have a need for starting pitching that can easily be filled by re-signing Max Scherzer, but key contributors Clayton Kershaw, Corey Seager and Kenley Jansen are among the club's free agents as well. The Dodgers nevertheless have been open about their interest in retaining Scherzer, who regularly raved about his experiences with the team after being traded at the deadline this past season.
MLB・9 DAYS AGO
ESPN

The Los Angeles Dodgers reached agreement Wednesday with versatile All-Star Chris Taylor on a four-year deal that includes a club option for a fifth season, the team announced. The deal is worth $60 million, sources told ESPN's Jeff Passan. Taylor will be paid $15 million in 2022 and '23, then...
MLB・7 DAYS AGO
The Ringer

JJ was live on Spotify Greenroom reacting to the massive news that three-time Cy Young winner Max Scherzer is signing with the Mets, giving them the best one-two punch in baseball and putting the city, and entire league, on notice. We always want to hear from you! Leave JJ a...
MLB・9 DAYS AGO
dailydodgers.com

Dodgers lose Max Scherzer to Mets; Corey Seager could be next to leave

Blame left-hander Steven Matz for spurning the Mets and angering Cohen, spurring a spending spree that is projected to push the Mets past the Dodgers for the highest payroll in baseball next season — whenever that season might arrive. More deals are expected on Cyber Monday as teams try to beat the anticipated shutdown by getting players signed and physicals completed in time to make those contracts official.
MLB・9 DAYS AGO
dailydodgers.com

Scherzer then became the most dominant starting pitcher in the majors over the regular season's final two months. His price rose with each outing as he completed another season that warranted Cy Young consideration. In the end, the price became too high.
MLB・9 DAYS AGO
Inside The Dodgers

Hall of Fame manager Joe Torre only spent three years at the helm with the Dodgers. In his first season, he was able to manage the team to their first NL Championship Series in 20 years. But apparently, a young lefty named Clayton Kershaw wasn't his biggest fan. Torre said in an interview this week ...
MLB・20 DAYS AGO