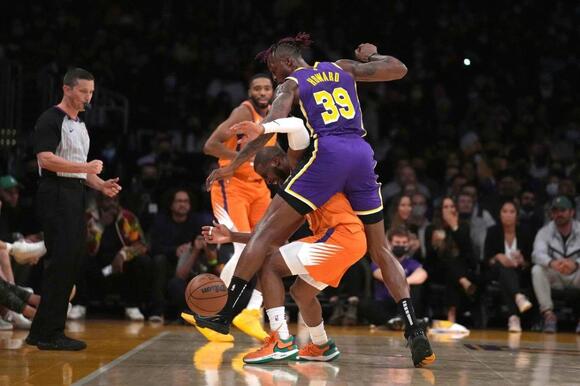 A historic night for Chris Paul was marred by two incidents, one an altercation between Lakers teammates Anthony Davis and Dwight Howard, during the visiting Phoenix Suns’ 115-105 triumph over Los Angeles on Friday night.

In a game matching two teams that had lost at home in their season openers, Paul led the Phoenix bounce-back effort with 23 points and a game-high 14 assists.

His most significant tally came on a free throw in the second quarter that not only produced the 20,000th point of his career but also made him the first in NBA history to achieve both that milestone and 10,000 assists.

Paul became the 47th player to reach 20,000 points. He ranks fifth all time in assists.

As the Suns were en route to a 57-44 halftime advantage, Davis confronted Howard at the Lakers’ bench during a Phoenix timeout a few minutes after the veteran big man had committed a hard foul on Paul and subsequently mishandled an alley-oop pass.

Howard didn’t back down and was nearly pushed through the bench as fans in the pricey first row scattered.

After getting nine minutes of playing time in the first two periods, Howard only left the bench in the second half to serve as a cheerleader. He wore a white sleeveless undershirt over his jersey top.

In a game that also featured five technical fouls, Rajon Rondo had a run-in with a fan in the third quarter when the Lakers guard was pointing at the man following a soft drink having been thrown or spilled on the sidelines. The man slapped Rondo’s hand away, then was quickly escorted away by security guards.

Related: NBA Power Rankings – Where all 30 teams stand at the start of the season

LeBron James finished with 25 points and Davis 22 to go with a team-high 14 rebounds for the Lakers, who trailed by as many as 32 points before getting as close as 107-95 on an Austin Reeves 3-pointer with 1:51 to play.

Crowder then countered with a 3-pointer and the Suns, who had fallen to the Denver Nuggets in their opener, kept the Lakers at arm’s length the rest of the way.

After a lackluster Lakers debut in a loss to Golden State on Tuesday, Russell Westbrook nearly registered a triple-double, finishing with 15 points, 11 rebounds and a team-high nine assists. Carmelo Anthony added 16 points off the Los Angeles bench.

LeBron James scored seven of his season-high 39 points in overtime, and the Los Angeles Lakers closed their five-game road
NBA・13 DAYS AGO
vavel.com

How to watch Cavaliers - Suns Live Stream on TV and Online?. If you want to directly stream the game: NBA Game Pass. If you want to watch it on the internet, VAVEL US is your best option!. 9:57 PM18 hours ago. What time is Cavaliers-Suns match for NBA?. This...
NBA・14 DAYS AGO
Yardbarker

Here come the Suns, the hottest team in the NBA. Building on their breakout run to the NBA Finals last season, the Suns will arrive at Madison Square Garden on Friday night riding a 14-game winning streak and with the league’s second-best record, at 15-3. Veteran point guard Chris Paul,...
NBA・12 DAYS AGO
vavel.com

Warriors & Suns Reign Over The West + Can Lakers Bounce Back?

Steph Curry has been electric while the Suns’ winning streak continues, could this be the beginning of a new rivalry and will they still be the two favorites to win the West? Also, what next for LeBron James & the Lakers?. 1:00 How are Steph Curry and the Warriors back...
NBA・7 DAYS AGO
IndyStar | The Indianapolis Star

Indiana Pacers rookie Chris Duarte made a miraculous 3-pointer Wednesday night to send their game against the Los Angeles Lakers to overtime. Duarte received a pass from Malcolm deep in the left corner and hit a heavily-guarded off-balance shot to tie the score at 112. Duarte, who is averaging 13.1 points a game, had...
NBA・13 DAYS AGO

The NBA and MeiGray are proud to offer fans and collectors across the globe the opportunity to own a piece of history... a jersey worn in a Kia NBA Tip-Off game on Opening Night of the 2021-22 National Basketball Association regular season, by #3 Chris Paul of the Phoenix Suns.
NBA・13 DAYS AGO
Golden State of Mind

How to watch Warriors at Suns

The Golden State Warriors will tip off tonight against the Phoenix Suns in a marquee matchup between two of the best teams in the NBA. The game will be played at 7pm PT in Phoenix and will be nationally televised on TNT. The Warriors kept their 7-game winning streak alive...
NBA・7 DAYS AGO
Yardbarker

Chris Paul On The Suns' Mentality Amid 16-Game Winning Streak: "We've Got A Great Group. It's About Accountability. If You're Not Doing The Right Stuff, You're Going To Stick Out."

The Phoenix Suns are on an incredible 16-game winning streak, and that is credited to the brilliance of Chris Paul and Devin Booker in clutch situations. But there is a major test looming, as they would have to face the league's best defensive team right now, Golden State Warriors. While...
NBA・7 DAYS AGO
hoopsrumors.com

Suns players met with head coach Monty Williams and general manager James Jones when the allegations against team owner Robert Sarver broke early in November, writes Joe Vardon of The Athletic. Although the players haven’t said much publicly about those allegations, they got information about the situation and discussed it internally during those meetings.
NBA・12 DAYS AGO

Saturday night was big for Bronny James, who played at Staples Center, the arena where his father plays every night, stealing all the attention with his impressive displays on the court. The 17-year-old went against LeBron James' Alma Mater, St. Vincent St. Mary, dominating them, dropping 19 points in a...
NBA・3 DAYS AGO
firstsportz.com

Russell Westbrook came out with an inspiring triple-double for the Los Angeles Lakers when the purple and gold army were on road to lock horns against the New York Knicks. Being without LeBron James (1-game suspension), it was the former who managed to register 31 points, 13 rebounds and 10 assists yet the away side slipped to the 9th spot in the Western Conference standings after suffering their 10th loss of the season.
NBA・14 DAYS AGO
NBC Sports

Three Things is NBC’s five-days-a-week wrap-up of the night before in the NBA. Check out NBCSports.com every weekday morning to catch up on what you missed the night before plus the rumors, drama, and dunks going that make the NBA great. 1) Chris Paul has Suns almost unstoppable in clutch.
NBA・1 DAY AGO
lakers365.com

ESPN liked Tuesday's Warriors-Suns game so much that it decided to air the rematch Friday, bumping the battle for Los Angeles off its airwaves. Never mind that the Lakers are missing LeBron James, who expected to miss multiple games due to the NBA's coronavirus protocols (he said in October that he's vaccinated). Or that Kawhi Leonard is out for the next several months, at least, with a torn ACL he suffered in last season's playoffs.
NBA・5 DAYS AGO
Yardbarker

Chris Paul has always had a mental edge on his peers and enemies. He is smarter than most and, perhaps more importantly, much more obsessed. At times, the latter quality has been to his detriment, as his drive to achieve the platonic ideal of basketball execution is not always shared by the people he plays with. Some of his teammates have been too good at improvisation, too fluid or simply too athletic to want to fit themselves into Paul’s meticulously constructed blueprints. Their advantages come from something he can’t quite account for, they have believed — or, less generously, they may not have wanted to do the same amount of work that he does.
NBA・6 DAYS AGO
Sports Illustrated

Chris Paul And the Suns Have Their Foot On the Gas

How Phoenix is pushing the pace during its 13-game winning streak.
NBA・14 DAYS AGO
sacramentosun.com

Marcus Morris Sr. had a season-high 21 points and Paul George added 19 as the visiting Los Angeles Clippers held on for a 119-115 victory over the Los Angeles Lakers on Friday in the first meeting of the season between the intracity rivals. Luke Kennard also had 19 points for...
NBA・4 DAYS AGO
ClutchPoints

The magical run of the Phoenix Suns has ended at 18 wins after a Friday night loss to the Golden State Warriors. But All-Star Chris Paul is far from discouraged. The Suns point guard was asked about the end of their historic win streak at the hands of Stephen Curry and Co. But instead of dwelling on the defeat, the 17-year NBA veteran decided to look ahead.
NBA・4 DAYS AGO