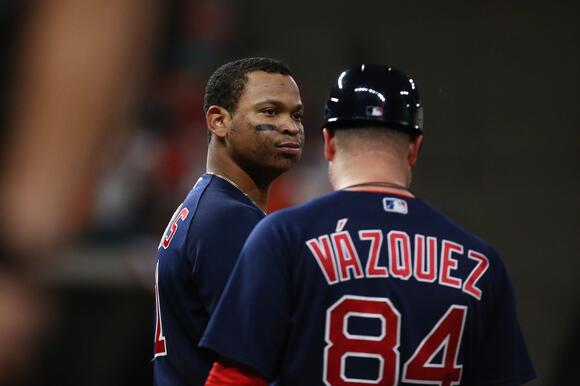 HOUSTON - They would routinely come to the edge of the cliff, slam on the brakes and start heading to safer ground. Friday night, the Red Sox finally fell off the ledge.

The resiliency that had defined Alex Cora's club through losing streaks, COVID-19 cases and roster upheaval was ultimately no match for a really bad offensive slump at a really bad time. It's why the Red Sox had to put a wrap on their 2021 season, falling to the Astros, 5-0, in Game 6 of the American League Championship Series.

While the nitpicking that comes with an elimination will undoubtedly unfold in the coming days, there is one reason above all that the Red Sox maxed out at 98 wins - an inability to hit.

In their final three games of the season, the Red Sox were outscored 23-3. End of story.

The team that had found itself on a record offensive pace through the first eight games of the postseason got turned inside-out in its final three games. Two runs in Game 4. One in Game 5. And, finally, just to properly punctuate the problem, a goose egg in the series finale.

The Red Sox' offensive futility from the last two games at Fenway Park carried over in dramatic fashion, with Houston starter Luis Garcia rebounding from his bad knee-induced, one-inning Game 2 to hold the Sox hitless until Kiké Hernandez's two-out triple in the sixth inning.

The Hernandez hit - which traveled 394 feet and missed clearing the Minute Maid Field left-center field wall by just a few feet - was the final batter for Garcia, who gave up just the one hit while striking out seven over his 5 2/3 innings. It was also striking how the righty managed his dominance, displaying the kind of fastball he hadn't offered throughout his entire career.

It's not as if the Red Sox didn't have some glimmer of hope, with the seventh inning against reliever Kendall Graveman offering just that. That's when Cora pushed his chips to the middle of the table.

With one out, the Red Sox put runners on the corners thanks to a J.D. Martinez walk and Alex Verdugo single. The Sox manager chose to replace Christian Arroyo with Travis Shaw, who worked a 3-1 count against the righty reliever. But after a called strike, Shaw swung and missed at a Graveman changeup, resulting in an inning-ending double play after Verdugo was caught trying to steal.

As was the case in the previous two losses, the Red Sox pitchers did their part for the majority of the contest, with Nathan Eovaldi once again stepping up when it counted the most. Just three days after throwing 24 pitches in the intense ninth-inning environment of Game 4, Eovaldi allowed just one run (scoring when Hernandez dropped a first-inning fly ball by Yordan Alvarez) while going 4 1/3 innings.

And while Josh Taylor allowed a leadoff triple to Alvarez in the sixth inning, Tanner Houck did his part to keep it a ballgame by inducing a double-play grounder to first baseman Kyle Schwarber. After tagging Carlos Correa (who had been hit by a pitch) at first base and stepping on the bag, Schwarber's throw home was just too late to prevent the Astros' second run.

The Astros would once again pull away in the late innings, this time using a Kyle Tucker three-run homer in the eighth off Adam Ottavino to seal the deal.

In the end, the nun who threw out the first pitch - pointing to her wrist as an homage to Correa - was right: It was the Astros' time. Not so much for the Red Sox.

Thanks to MacFarlane Energy where they provide championship quality home heating oil and HVAC services.

The Boston Red Sox lost a key member of their rotation earlier this offseason, as Eduardo Rodriguez agreed to a five-year deal worth $77 million with the Detroit Tigers. On Friday, the front office found a free agent who can potentially take Rodriguez’s spot in the rotation. According to ESPN...
MLB・11 DAYS AGO
NBC Sports

Is Semien's asking price too steep for Red Sox?

Marcus Semien has been rumored to be on the Boston Red Sox' radar as a potential fit in free agency. But if they hope to sign the slugging middle infielder this offseason, they'll have to pay a pretty penny. Semien is asking for more than $200 million on his next...
MLB・14 DAYS AGO
Yardbarker

What’s Next For Red Sox After Missing Out On Steven Matz?

The Boston Red Sox entered the offseason hoping to retain left-handed pitcher Eduardo Rodriguez. When that didn’t happen, the club had no choice but to start looking elsewhere for a rotation arm, and Steven Matz was one guy on Boston’s radar. The Red Sox were frequently mentioned as possible suitors...
MLB・13 DAYS AGO
WEEI Sports Radio

Thanks to the news that the Tampa Bay Rays were locking up Wander Franco to a record-setting contract extension, we are reminded of how such a strategy could help the Red Sox.
MLB・13 DAYS AGO

Why the Red Sox are seeing the best in Michael Wacha

The Boston Red Sox are willing to roll the dice that Michael Wacha is closer to the pitcher Tampa Bay got in the final month of the 2021 season than what he showed for the season’s first few months.
MLB・9 DAYS AGO
985thesportshub.com

Red Sox third baseman Rafael Devers captured another honor for his strong 2021 campaign Tuesday, as the 25-year-old was named to the All-MLB Second Team. In action for 156 games this past season, Devers mashed a career-high 38 home runs, and his 113 RBIs were the second-highest single-season total of his five-year MLB career. Devers also hit .279 and his .890 OPS was his best since a .916 in 2019.
MLB・13 DAYS AGO
FanSided

According to Tim Dierkes of MLB Trade Rumors, the free agent market for starting pitcher Marcus Stroman is starting to heat up. Dierkes says that a handful of teams, including the Chicago Cubs, New York Mets, San Francisco Giants, Boston Red Sox, and Los Angeles Angels are interested in adding Marcus Stroman to their starting rotation in 2022.
MLB・12 DAYS AGO
NESN

Steven Matz reportedly will not be heading to Boston after all. ESPN’s Jeff Passan early Wednesday morning reported Matz is taking his talents to St. Louis on a four-year deal with an average annual value of $11 million. According to Passan, the left-hander can earn up to $48 million on his new contract with the Cardinals.
MLB・13 DAYS AGO

Michael Wacha has found a new home with the Boston Red Sox, and now we’re getting a few details about his deal. The pitcher and Red Sox agreed to a one-year contract Friday. Wacha is expected to “bring depth” to a rotation that certainly has a lot of questions surrounding it going into the 2022 Major League Baseball season.
MLB・10 DAYS AGO
Yardbarker

The Red Sox appear open to a reunion with free agent left-hander Rich Hill, according to The Boston Globe’s Alex Speier. In a recent conversation with Speier, Hill “suggested that he’s been in touch with members of the Red Sox this offseason, just as he was as a free agent last offseason.”
MLB・11 DAYS AGO
NBC Sports

Tomase: How should Red Sox evaluate Kyle Schwarber the hitter?

Over his first six years and two months in the big leagues, Kyle Schwarber qualified as your prototypical nice player -- a little power, a little patience, a little limited. He could find a home in most lineups, but not necessarily a starring role. And then came June of 2021.
MLB・13 DAYS AGO
theScore

Could the Red Sox swipe John Means from the Orioles?. Going into this offseason we knew that the Red Sox would be shopping for some starting pitching and now that Eduardo Rodriguez is in Detroit, that need is even greater. As it stands right now, Boston has a righty heavy rotation but a very interesting report came out earlier today that could allow Chaim Bloom to bring a bit more balance to his pitching staff.
MLB・14 DAYS AGO
NECN

BOSTON (CBS) — The Red Sox have a giant hole in their starting rotation, but they also need some help at the back end of the bullpen this offseason. Chief Baseball Officer Chaim Bloom is scouring near and far to find help in that area, and is reportedly interested in someone who closed games in New York a few years back. The Red Sox have reportedly expressed interest in free agent reliever Jeurys Familia, according to WEEI’s Rob Bradford. Jeurys, 32, hasn’t closed since 2016, when he saved 51 games for the New York Mets and earned an All-Star nod. But...
NFL・14 DAYS AGO
FanSided

Boston Red Sox Rumors: Jeurys Familia could be the solution in the pen

The Boston Red Sox offseason plans are starting to heat up. With the MLB hot stove in full swing, particularly for the pitching market, the Sox have been involved in all sorts of rumors. While they haven’t ended up pulling the trigger on anyone yet, that doesn’t mean they aren’t going to in the future.
MLB・13 DAYS AGO
FanSided

Only one Red Sox player made a 2021 All-MLB Team

Boston Red Sox third baseman Rafael Devers made an All-MLB team. The third annual All-MLB Teams were announced Tuesday on MLB Network and one Boston Red Sox star made the cut. The All-MLB Team is split into a First and Second Team with each including a player at every infield position, three outfielders, a designated hitter, five starting pitchers plus two relievers.
MLB・13 DAYS AGO
Tv20detroit.com

A former Boston Red Sox player who helped the team win a World Series title in 2007 has died. According to ESPN Deportes and Dominican newspaper Diario Libre, former shortstop Julio Lugo died of an apparent heart attack on Monday. Lugo's sister, Rina Lugo, told the sports outlet that her...
MLB・22 DAYS AGO
MassLive.com

Boston Red Sox’s Michael Wacha: ‘I feel like the changeup was as nastiest as it’s been ... I feel like a new man’