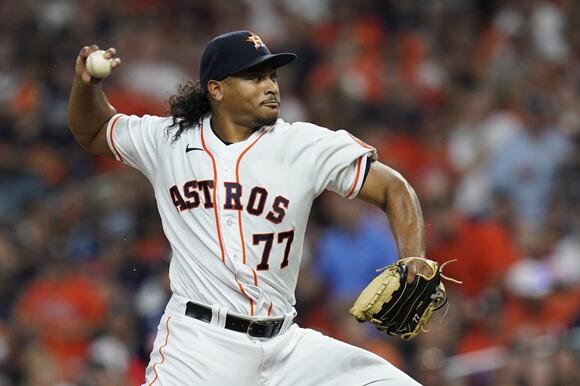 HOUSTON (SportsRadio 610) - Astros rookie Luis Garcia pitched 5 2/3 innings of one-hit ball against the Boston Red Sox with his team holding a 1-0 lead in the sixth at the time of his exit.

This outing was much different than Garcia's last one, when he was charged with five earned runs in just one inning, including a grand slam. Garcia commanded his pitches early against the Red Sox, and his velocity was higher than it's ever been .

Garcia also made Boston hitters whiff on his cutter on 12 out of their 13 swings. He dominated this lineup, reminiscent of Framber Valdez the game before at Fenway .

The Astros scored their runs on a Yordan Alvarez RBI-double in the first inning, then Kyle Tucker's grounder in the sixth.

Carlos Correa has made an official decision on his qualifying offer from the Houston Astros. Correa has declined the Astros’ $18.4 million qualifying offer, according to Jon Heyman. His days in Houston are over. The 27-year-old star is now the top free agent in baseball and is bound to receive...
MLB・19 DAYS AGO
NBC Sports

The courtship of Kyle Schwarber continues in earnest. Schwarber recently declined his mutual option with the Boston Red Sox to become an unrestricted free agent, and several teams reportedly are interested in the veteran slugger. That includes the Red Sox, who remain "engaged" with Schwarber in contract discussions, per Chief Baseball Officer Chaim Bloom.
MLB・16 DAYS AGO
International Business Times

The New York Mets are skimming the free-agent pool, and one name that could make sense would be Steven Matz. Ironically, the 30-year-old pitcher is the same guy the Mets traded to the Toronto Blue Jays last winter. A reunion between the Mets and Matz would make sense considering the...
MLB・16 DAYS AGO
WEEI Sports Radio

The Boston Red Sox continued to add to their organizational depth, signing former Detroit first-round pick Christin Stewart to a minor-league deal with an invitation to big-league camp.
MLB・4 DAYS AGO

The Padres, eyeing upgrades in their bullpen, are in talks with a pair of somewhat under-the-radar options on the free-agent market. FanSided’s Robert Murray tweets that San Diego is in talks with righty Luis Garcia, while The Athletic’s Ken Rosenthal reports (also via Twitter) that the Friars are in serious discussions with right-hander Robert Suarez.
MLB・4 DAYS AGO
ClutchPoints

Mark Berman, of Fox 26 Houston, got an inside scoop on who has reached out to Carlos Correa and his agent. According to Berman, Correa’s agent has heard from the New York Yankees, Boston Red Sox, Los Angeles Dodgers, Chicago Cubs, and the Atlanta Braves. It would make sense for...
MLB・3 DAYS AGO
dodgerblue.com

The Los Angeles Dodgers had Will Smith, Max Muncy, Justin Turner, Corey Seager, Trea Turner, Mookie Betts, Walker Buehler, Max Scherzer, Julio Urias and Kenley Jansen named among the nominees for the 2021 All-MLB Team. This is the third annual recognition for the top players, with winners being announced on...
MLB・24 DAYS AGO
985thesportshub.com

Steven Matz will not be taking his talents to Boston, as the St. Louis Cardinals have outbid the field and signed the lefty to a four-year deal worth up to $48 million, according to ESPN’s Jeff Passan. The Matz decision, which was always expected to come before Thanksgiving, came on...
MLB・10 DAYS AGO

Where are the Astros’ contract negotiations with free agent Carlos Correa? With the Dec. 1 deadline for a leaguewide work stoppage looming, and Correa the biggest free agent star still on the market, everyone wants to know what’s going on.
MLB・3 DAYS AGO
Bleacher Report

Two-time All-Star Carlos Correa hasn't completely closed the door on returning to the Houston Astros. Per The Athletic's Ken Rosenthal, Correa is still in contact with the Astros as he continues to explore offers in free agency. Mark Berman of Fox 26 in Houston reported on Nov. 6 that Houston...
MLB・4 DAYS AGO
MassLive.com

There are 1,200 major-leaguers. If you were to rank them all based on the likelihood of the Red Sox acquiring them, Jackie Bradley Jr. might have been right at the bottom of the list. Yet less than 30 minutes before the start of baseball’s first work stoppage in 26 years,...
MLB・3 DAYS AGO
WCVB

BOSTON — A former Boston Red Sox outfielder known for his spectacular catches but perhaps less than stellar at bats is returning to Fenway Park, the team announced late Wednesday night. The Red Sox announced they had acquired outfielder Jackie Bradley Jr. along with minor league infielders Alex Binelas and...
MLB・3 DAYS AGO

Correa led all Major League players in Defensive WAR (Wins Above Replacement) at 2.9. Gurriel, 37, became the oldest player to win a Gold Glove at first base. He also led AL first basemen in zone rating (.874) and assists (86).
MLB・27 DAYS AGO
610AM Sports Radio

The Astros mostly watched from the sidelines as other teams pursued Gerrit Cole and George Springer in free agency the last two winters, but that will not be the case as Carlos Correa hits the open market.
MLB・29 DAYS AGO
610AM Sports Radio

Bregman on Monday morning posted a photo on his Instagram stories, smiling, wearing a cast and giving a thumbs up after the surgery. He is expected to be ready for spring training.
MLB・26 DAYS AGO
610AM Sports Radio

This latest offer is not likely to convince Correa to stay. He is reportedly looking for a contract along the lines of his friend and fellow shortstop Francisco Lindor, who signed a 10-year, $341 million with the New York Mets earlier this year.
MLB・27 DAYS AGO
Yardbarker

Jeurys Familia is five years removed from his lone All-Star appearance, but he is coming off of a solid season out of the New York Mets bullpen that has apparently caught the eye of the Boston Red Sox. Per WEEI.com's Rob Bradford, the Red Sox are "showing interest" in Familia,...
MLB・11 DAYS AGO