FRISCO - There is, we will humbly submit, an advantage to having covered the Dallas Cowboys for the last 30-plus years: We speak "Jerry-ese.'' And it is a skill that comes in mighty handy every year as the NFL trade deadline approaches.

Case in point: Owner Jerry Jones speaking this week with 105.3 The Fan, and in the judgment of the fine folks at FanSided, "detailing what that the Cowboys plans for the trade deadline are. ... dropping a huge hint ... ahead of what could be a wild NFL trade deadline.''

He's suggesting it's going to "be a wild NFL trade deadline''?

Actually, if a person is proficient at "Translating Jerry,'' the Cowboys owner did exactly none of those things.

Jerry's quote, that has excited the uninitiated?

The Cowboys, he said, are “open for business year-'round. I think we’ve got a unique situation because we’ve got players coming that we’re going to have to have roster spot room for. So, we’re busy.”

Except ... We talked to two team sources shortly after Jerry's interview, asking specifically about Dallas being "busy.'' Both sources politely disagreed with the owner's assessment.

"Business as usual,'' is how one put it.

"Nothing on the front burner,'' said the other.

When Will Dak Return to Cowboys Practice?

Prescott is not expected to participate in Monday's light practice as the team convenes, with his first workout likely scheduled for Wednesday.

How Much is Cowboys’ CeeDee Lamb Fined Goodbye Wave at Patriots?

Updated by the minute, our Dallas Cowboys 2021 NFL Free Agency and Trade Tracker: News and views on the roster-building effort

"All these Philly athletes tryna s--t on (Ben) Simmons for extra pat on the back from Philly fans. Cornball activity," Cowboys WR Noah Brown says.

Maybe the only thing "unusual about business'' is that Dallas is 5-1, which can create a go-for-it mindset when envisioning a long-awaited return to the Super Bowl. But "open for business year-'round'' is something Jerry has literally said, in one form or another, for the last 30-plus years.

It's not a revelation. It's a by-rote response.

But what about, "We’ve got players coming that we’re going to have to have roster spot room for''? Does he mean, "players coming via trade''?

Nope. He does not. He means that the Cowboys do have players in Michael Gallup, Kelvin Joseph, Neville Gallimore and DeMarcus Lawrence (we're told in that order) who are coming off IR lists.

Those are the "players coming.''

And when he said that room must be made, he's talking about who on the present active roster will be cut. Or IR'ed. Or, in theory, traded.

But as we've reported in this space, no matter theories from even in-the-know folks at ESPN, there is not in place a plan to trade away Gallup. The idea is not to "make room'' by trading Gallup away; the idea is to make room for Gallup. For Joseph. For Gallimore. And for Lawrence.

Bleacher Report thinks the Cowboys are going after Steelers cornerback Joe Haden. But CowboysSI.com has told you that Dallas is not planning a pursuit of Joe Haden. (You should believe CowboysSI.com).

It's easy to get fooled by Jerry's salesmanship style of speaking; it's sexy for media and fans to dream up trade scenarios, and the owner knows it. So while Jones sometimes does drop hints (and enjoys the game of doing so), there are no hints here.

That doesn't guarantee Dallas will or won't make a deal before the Nov. 2 deadline. But we don't need "hints'' to guide you, because we've already been told: Here inside The Star, the Cowboys feel like their probable "roster additions'' in November are going to be named "Gallup.'' "Joseph,'' "Gallimore'' and "Lawrence.'' And the feeling won't be about selling dreams. The feeling will be real.

Subscribe to the Cowboys Fish Report on YouTube for constant daily Cowboys live-stream podcasts and reports from Inside The Star! 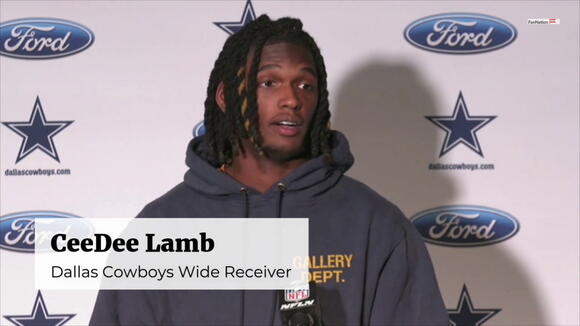 If you’re at least 21 years of age and you want to travel to a destination city to have a great time with some friends, two cities come to mind - Las Vegas and New Orleans.
NFL・4 DAYS AGO
Yardbarker

Jerry Jones was not at all happy following his Dallas Cowboys’ 36-33 overtime loss to the Las Vegas Raiders at home on Thanksgiving. The Cowboys owner was especially unhappy with all the penalties called in the game. The Cowboys were penalized 14 times for 166 yards, which is a franchise...
NFL・11 DAYS AGO
CowboyMaven

Since entering the league in 2016, nobody has more rushing yards than Dallas Cowboys running back Ezekiel Elliott. ... with enough wear and tear along the way that a source tells CowboysSI.com that the club could opt to sit him out on Thursday when Dallas plays at New Orleans. Elliott...
NFL・9 DAYS AGO
Sporting News

Dak Prescott may not be willing to criticize Amari Cooper's "personal decision" not to get vaccinated, but Hall of Fame receiver Michael Irvin is. Irvin, the former Cowboys star who now serves as an NFL Network analyst, ripped Cooper for his decision in a recent interview with TMZ. "I don't...
NFL・13 DAYS AGO

Jerry Jones Frustrated as Cowboys Star Misses Game with Covid: ‘He Might Have Played Had He Been Vaccinated’

Jerry Jones is paying Amari Cooper $20 million this season and the boisterous Dallas Cowboys owner appears frustrated by the unvaccinated wide receiver getting sidelined with Covid. Cooper was placed on the reserve/Covid-19 list last Friday, just before the Cowboys began a pivotal stretch of playing three games in 12...
NFL・13 DAYS AGO
Larry Brown Sports

The status of running back Ezekiel Elliott has been a big focus lately for the Dallas Cowboys, as the running back continues to battle a knee injury. It you believe Cowboys owner Jerry Jones, however, the worst is behind the running back. On Friday, Jones told 105.3 The Fan that...
NFL・2 DAYS AGO
12up

Jerry Jones calls out Amari Cooper for being unvaccinated

For the Dallas Cowboys, they sure are missing star wide receiver Amari Cooper. The speedster tested positive for COVID last week, missing the 19-9 loss to the Kansas City Chiefs. Cooper is also set to miss the Thanksgiving matchup with the Las Vegas Raiders. Jerry Jones is disappointed and even...
NFL・13 DAYS AGO
On3.com

The Dallas Cowboys were without wide receiver Amari Cooper on Sunday against the Kansas City Chiefs after he was placed on the reserve/COVID-19 list. Cooper will also miss the Cowboys Thanksgiving day game against the Los Vegas Raiders. He is unvaccinated, which means that he is forced to miss a minimum of ten days.
NFL・14 DAYS AGO

The NFL ate well on Thanksgiving this year and not just at the table. CBS revealed Friday that the marquee Thanksgiving game between the Las Vegas Raiders and the Dallas Cowboys was the “most-watched NFL regular season game on any network since 1990,” per ESPN’s Adam Schefter. CBS also said that the game brought in an estimated average viewership of 38.531 million.
NFL・10 DAYS AGO
Yardbarker

Cowboys owner Jerry Jones: WR Amari Cooper's COVID-19 situation a 'classic case of how it can impact a team'

Amari Cooper is among a host of Dallas Cowboys players in line to miss the team's Week 12 Thanksgiving Day matchup against the Las Vegas Raiders. Cooper tested positive for COVID-19 leading up to Dallas' Week 11 game against the Kansas City Chiefs, and because he is unvaccinated, he will not be able to clear the NFL's protocols by Thursday.
NFL・14 DAYS AGO
NBC Sports

Jerry Jones: The sky is not falling

The Cowboys lost for the third time in four games against the Raiders on Thursday, but Cowboys owner Jerry Jones said on Friday morning that he was taking Thanksgiving to heart and “looking at the best parts of where” the NFC East leaders sit. Jones admitted the 36-33 loss was...
NFL・11 DAYS AGO
247Sports

Dallas Cowboys owner and general manager Jerry Jones appeared extremely upset following the Cowboys' 36-33 overtime loss to the Las Vegas Raiders on Thanksgiving Day. The Cowboys and Raiders were each called for 14 penalties that resulted in a whopping 276 penalty yards. “I call it ‘throw up ball,’” Jones...
NFL・11 DAYS AGO

Cowboys owner and General Manager Jerry Jones was not a fan of the “throw up ball” he saw in his team’s penalty-fest of a Thanksgiving loss to the Raiders. And Jones indicated that the real issue is not the NFL’s rules, but over-officious officials. Jones said he can’t fault the...
NFL・10 DAYS AGO
Sports Illustrated

The Cowboys owner had a surprisingly upbeat take on his team's loss to the Raiders.
NFL・11 DAYS AGO
insidethestar.com

The Dallas Cowboys have gone 1-3 in November, falling behind the NFC leaders and now giving their division rivals some renewed hope. But despite the bad month, Owner and General Manager Jerry Jones says he still feels good about where the team is and where it’s headed. Yesterday’s overtime loss...
NFL・11 DAYS AGO
CowboyMaven

For the Dallas Cowboys, Sunday's game against the Kansas City Chiefs was arguably the biggest game of the year. Yet, "America's Team'' swung and missed -- hard. The nine points the team scored marked the lowest offensive output by the team all season and injury was also added to insult when CeeDee Lamb left the game with a concussion.
NFL・14 DAYS AGO
Sporting News

Thanksgiving at AT&T Stadium turned into laundry day. Flags spilled onto the turf non-stop for almost four hours as the Cowboys hosted the Raiders. The officiating crew led by referee Shawn Hochuli, son of Ed, produced 28 accepted penalties — 14 for each team — for 276 total yards (a franchise-record 166 against Dallas). The calls ranged from obvious false starts to an esoteric foul on Raiders center Andre James for a head bob. Dallas defensive back Anthony Brown was flagged four times for pass interference, with the last one setting up Las Vegas to win 36-33 in overtime.
NFL・11 DAYS AGO