Padres' managerial search going a lot of different ways; experience might not be required 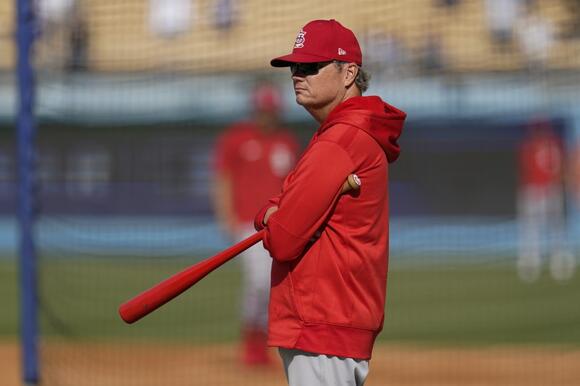 The only thing known for sure regarding the Padres ’ managerial search is the team seeks a manager who has accomplished enough that he will immediately command players' respect.

That doesn't, however, necessarily mean the team will pick a former manager.

After going with rookies both times he has hired managers, much of the speculation around the league is that Padres General Manager A.J. Preller may well go that route again.

That doesn’t mean the team is averse to a veteran manager.

Mike Shildt will interview with the team this weekend after being let go by the St. Louis Cardinals last week, two sources with knowledge of the situation said Friday. The Cardinals went to the postseason in each of Shildt’s three full seasons as their manager. He was fired Oct. 15 with team President John Mozeliak citing “a philosophical difference" in how the team should move forward.

Whether this is the first actual interview is not known, but it won’t be the last. People familiar with the goals of Preller and team Chairman Peter Seidler said the new manager likely will not be hired until the end of the month at the earliest.

The Padres are also said by people familiar with internal discussions to have interest in former Detroit Tigers and Los Angeles Angels manager Brad Ausmus . He interviewed for the job in 2019 before Jayce Tingler was hired, and people inside the organization said Preller and Ausmus share some common beliefs about how teams should be run.

Among the names mentioned by sources as a possibility is Mike Scioscia , who managed the Angels from 2000 through 2018. Many people in the league have expressed skepticism Scioscia or Bruce Bochy would take the job under Preller. The Padres have had only preliminary contact with Bochy, who retired a year after Scioscia.

The Padres are said to have already reached out to coaching candidates, indicating Preller will again do the hiring of at least some of the new manager’s staff.

Where it became apparent relatively quickly in 2019, after Andy Green was fired, that Tingler and Ron Washington were the leading candidates, this search has been less hurried and conducted in a far more secretive manner.

The 2021-22 MLB offseason is a few weeks old and we're still waiting for the first major move to happen. That's not unusual -- like the MLB season itself, the offseason is a marathon rather than a sprint -- though the impending expiration of the collective bargaining agreement throws a giant wrench into the hot stove. Still, baseball's offseason is underway.
MLB・6 DAYS AGO
Tv20detroit.com

The New York Yankee family was saddened to learn of the passing of ex-Yankee manager Bill Virdon. Virdon was manager of the Yankees during 1974 and 1975 before being replaced in 1975 my the new manager Billy Martin. In 1974 he won 89 games for the Yankees. However, Virdon’s claim...
MLB・7 DAYS AGO
NESN

The New York Yankees seemingly have been tied to each free agent this offseason, but reportedly got one of their guys Monday. The Yankees signed former Boston Red Sox shortstop José Peraza to a minor league deal, according to Dan Martin of the New York Post. Peraza has bounced around...
MLB・2 DAYS AGO

Former Mets pitcher Pedro Feliciano reportedly passed away in his sleep on Sunday night. ESPN’s Eduardo Perez first had the news on his Twitter account on Monday morning. Feliciano was just 45 years old and was reportedly jet skiing on Sunday with his family. Feliciano played nine seasons in the...
MLB・24 DAYS AGO
Boston

One of MLB’s fastest players — if not the fastest — is coming to Boston. The Red Sox announced Friday afternoon that they had claimed speedster outfielder Tim Locastro off waivers from the New York Yankees. Locastro, a 29-year-old who has played with Los Angeles Dodgers, Arizona Diamondbacks, and Yankees,...
MLB・27 DAYS AGO
92.9 The Game

Will Ozzie Albies finally get his bat going in the World Series against the Houston Astros? Did Brian Snitker make the right move by sliding Ozzie Albies down the batting order?
MLB・29 DAYS AGO
FanSided

Freddie Freeman has donned only a single uniform throughout his Major League Baseball career. And if the Atlanta Braves have their way, it’s the only uniform he’ll ever wear. But the path to that end may not come without come some hiccups. Freeman is currently a free agent and seeking...
MLB・19 DAYS AGO
FanSided

The Atlanta Braves are on top of the world, and rightly so. But just as the World Series ends, the offseason begins. These Braves won’t be back to potentially repeat. The Braves surprised all of baseball, taking a team without Ronald Acuña, Jr. and a suspect bullpen to the MLB mountaintop. Now, Alex Anthopoulos must start all over again.
MLB・29 DAYS AGO
MassLive.com

There are 1,200 major-leaguers. If you were to rank them all based on the likelihood of the Red Sox acquiring them, Jackie Bradley Jr. might have been right at the bottom of the list. Yet less than 30 minutes before the start of baseball’s first work stoppage in 26 years,...
MLB・13 HOURS AGO
WEEI Sports Radio

The Boston Red Sox continued to add to their organizational depth, signing former Detroit first-round pick Christin Stewart to a minor-league deal with an invitation to big-league camp.
MLB・2 DAYS AGO

Dansby Swanson has message for Braves about Freddie Freeman

Freddie Freeman’s impending free agency is not lost on his Atlanta Braves teammates, and one of them addressed that publicly during the team’s championship parade on Friday. The Braves’ parade culminated in a rally at Truist Park where numerous players spoke to the capacity crowd. Among them was shortstop Dansby...
MLB・27 DAYS AGO
MLB

Carlos Correa may have just given away his free agent destination

The No. 1 ranked free agent available is former Houston Astros SS Carlos Correa and everybody is waiting patiently (some not so much) to find out where he will sign. Well, Correa recently updated his Twitter bio (before quickly taking it down) and it just so happened to include a Tiger!
MLB・17 DAYS AGO
NESN

The Boston Red Sox will be letting Garrett Richards and Martín Pérez return to the free agent market. Both players had their team options declined for the 2022 season, making them free agents. MassLive’s Chris Cotillo had the news on Richards, and The Boston Globe’s Alex Speier reported the Pérez decision.
NFL・25 DAYS AGO
sportstalkatl.com

From 1995 to 2012, Chipper Jones was the face of the Braves, bringing the organization a World Series and an MVP award. It was a somber day for Braves fans when he finally hung it up, but Jones knew he was leaving the organization in good hands, passing the torch to Freddie Freeman, and it’s remarkable how similar their careers have been thus far.
MLB・22 DAYS AGO
FanSided

It wouldn’t be a recent Milwaukee Brewers off-season without trade rumors and closer Josh Hader. Hader has been now linked to the Philadelphia Phillies, who are looking to make a World Series run next year after just missing the playoffs in 2021 to the eventual World Series Champions Atlanta Braves. The Phillies will need several pieces to do that, including a shutdown closing pitcher.
MLB・12 DAYS AGO
Detroit Sports Nation

Free agency is upon us as according to reports, the Detroit Tigers are prepared to spend some money as they shape their roster for the 2022 season and beyond. The Tigers need plenty of help in the lineup but GM Al Avila has made it clear that adding a couple of veteran pitchers to the mix is equally important.
MLB・24 DAYS AGO
NJ.com

More problems for Robinson Cano. The New York Mets announced Wednesday “Canó was removed from the Estrellas Orientales roster with lower back discomfort. He has been prescribed physical therapy and is considered week to week.”. ESPN’s Hector Gomez was the first to report on Cano’s plans to play in the...
MLB・7 DAYS AGO